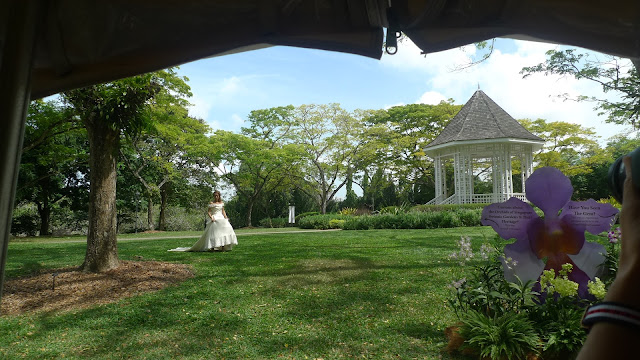 A fitting present for Singapore's 50th birthday, the Singapore Botanic Gardens has been inscribed as the country's first UNESCO World Heritage Site! I was privileged to be taken on a tour around the gardens and to sample several of its special heritage menus as part of celebrating the Garden City's upcoming jubilee National Day. 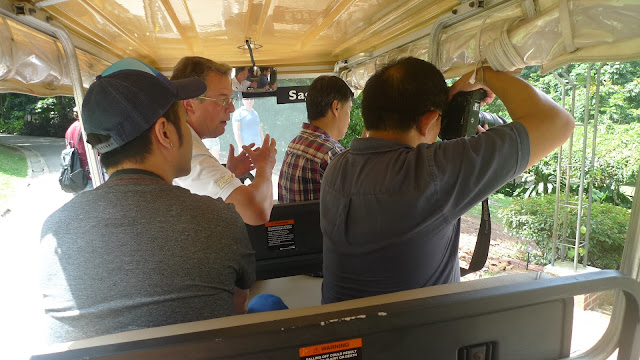 While I have been to the Singapore Botanic Gardens before, it was my first time roaming its grounds in a buggy! And it was driven by Dr Nigel Taylor, the garden's director, who shared interesting nuggets of info and insights ranging from history and ecology to plant and animal life. 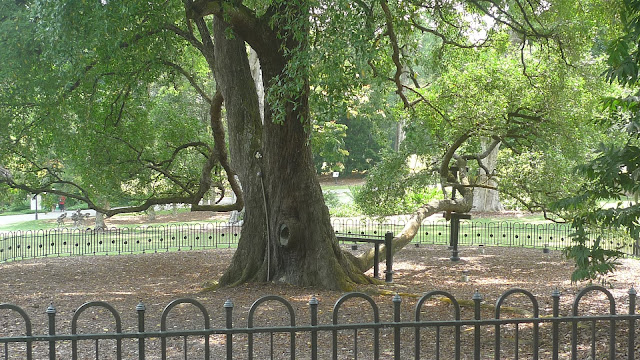 If this tree might look familiar, see the Singapore $5 note. Moohehe. Given its age and vulnerability, its lowest branch has been given a mechanized support which allows for stability and measured movement for growth. 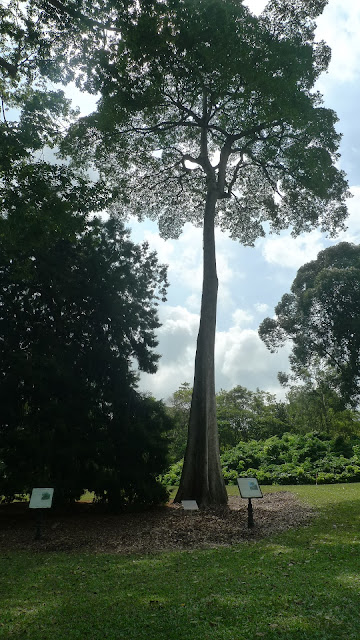 Among the trees in the gardens are some very tall ones. Makes a tall human seem like a toddler in the greater scheme of things. With their towering heights, these trees are susceptible to lightning strikes but have lightning conductors to mitigate any harm. #dontstandunderthistreewhenitrains 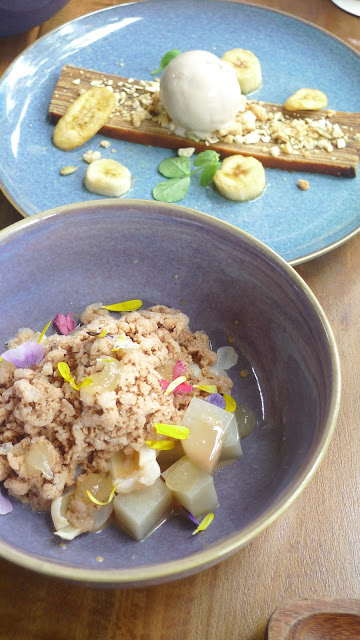 The first makan stop was at The Halia at Singapore Botanic Gardens (they have another outlet at Raffles Hotel which offers a different menu). This restaurant is a bit special to me as I used to work with them. Moohehe. Anyway in celebration of National Day, two special SG50 desserts, made with a tea based on the national flower (orchid!), are available until 31 August 2015. The Ginger & Gold Orchid ($12; foreground) features ice "kacang" granite with yuzu gel, lychee fruit and jelly in a medley of textures and flavours. For a moore interesting option to chocolate cake with ice cream, the White Orchid & Lapis ($14; background) offers a long thin slice of homemade lapis cake, white orchid tea ice cream, multigrain crumble, and caramelised and crunchy banana pieces. 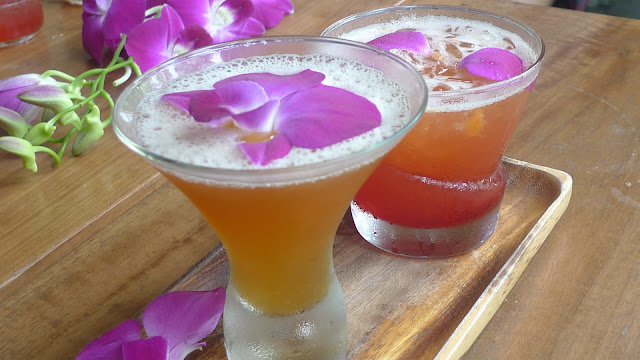 For those on a liquid diet (like yours truly. Moohehe), sip on two cocktails built on red orchid tea with a choice of either gin or rum- the Yam Seng ($23) has Sailor Jerry spiced rum balanced with lime juice and grenadine syrup while the 1965 ($25) contains Hendrick's gin, lemon syrup and lime juice. Both were pretty but strong so order up some food to go with them. 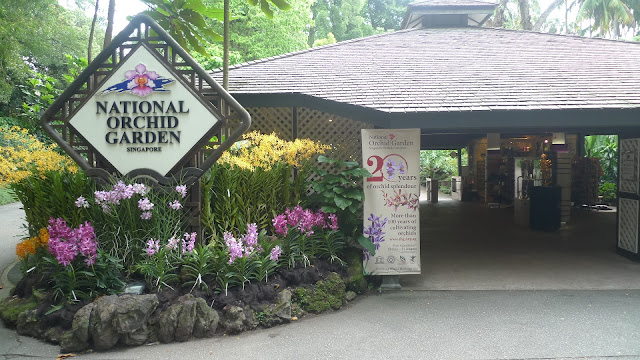 Then to give our stomachs a breather, we headed into the National Orchid Garden just around the corner from The Halia. Singaporeans can enjoy free admission from now until 31 August! 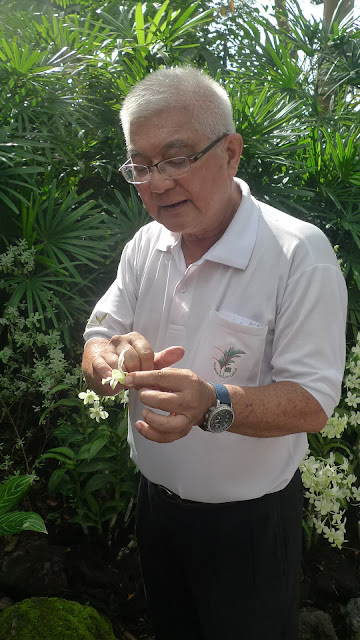 It was my first visit to the National Orchid Garden and we were in good hands as local orchid expert David Lim brought us around. 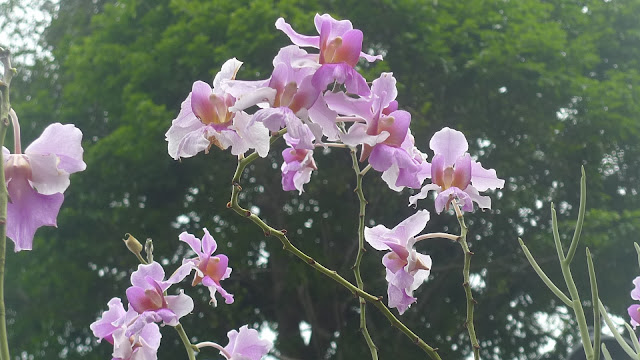 There we saw the national orchid, the Vanda Miss Joaquim, which was selected for its vibrant colours, hardiness and resilience- qualities which reflect the Singapore spirit, according to National Parks. 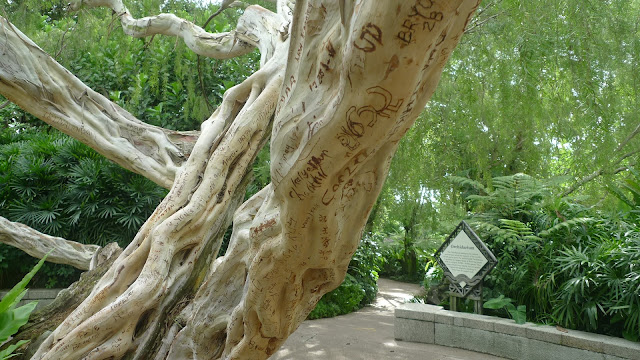 We also saw the unofficially-crowned "most vandalised" tree with scribbles of greetings and love notes. Moohaha. 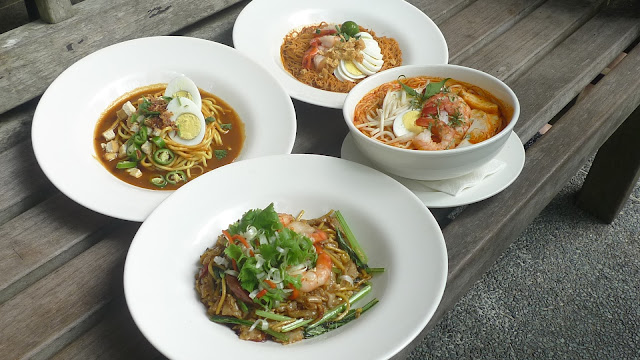 Then it was time for the next makan stop- Casa Verde. I still fondly remember WQ's and Hushie's solemnization brunch here a few years ago. On weekdays from 3-17 August 2015, Casa Verde will be featuring local iconic dishes by its Singaporean chef Danny Tan. Enjoy your choice of Laksa, Mee Siam, Char Kway Teow or Mee Rebus with a soft drink at $9.80 nett from 12pm to 2.45pm. Additionally, kids can have fun at a pizza-making workshop on 7 August, and on 9 August, get 50% off pizzas from 11.30pm to 5.45pm! 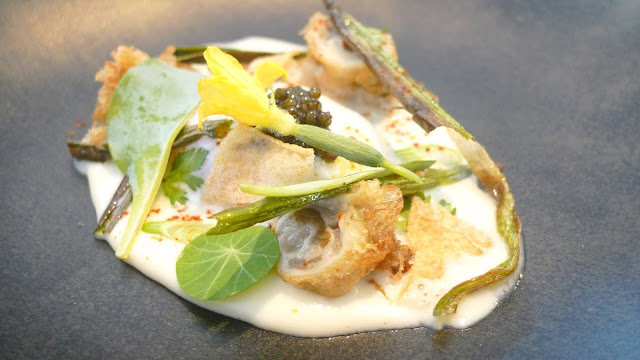 Next stop brought us to Corner House, a relatively new restaurant that has garnered critical acclaim. I was very much looking forward to meeting local chef Jason Tan since we last met eons ago when he was at the Mandarin Oriental Singapore. His cuisine defined as "Gastro-Botanica" gives substantial emphasis to the vegetables on the plate beyond being mere garnish or a supporting cast.

Singapore's 50th birthday also happens to be Corner House's first anniversary and to celebrate the affair, Chef Jason presents a specially crafted 8-course menu ($248/person) from now until 16 August 2015. Each of these 8 courses is inspired by his personal memories and chronicles his journey from childhood to being one of Singapore's prominent chefs.

We sampled 2 dishes from this celebratory menu. The first, "Remembering Oyster Omelette" (in the above photo), harks back to pre-hawker-centre days when street food was literally food on the streets. One of the street food his dad often bought home was oyster omelette. Imagine a modern, upscale, creative version and the "Remembering Oyster Omelette" with Royale oyster, farm egg, coriander mochi and Kristal de Chine caviar would appeal with its very refined touch yet keeping a bit of an old soul. 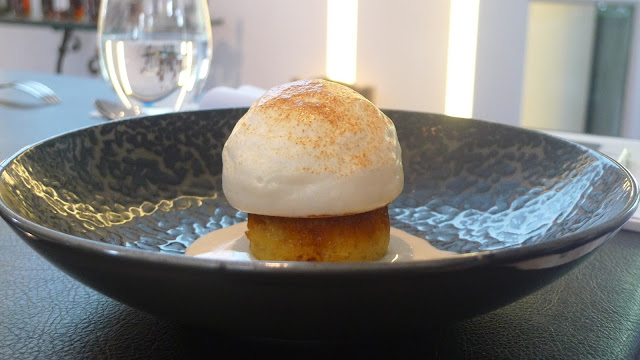 The last course is dessert and it takes the form of "My Corner of The World". Chef Jason's tribute to Corner House and celebrating his fulfilled dreams of owning a grand restaurant, this durian bread and butter pudding with a kopi surprise inside is also inspired by the restaurant's namesake E.J.H Corner, an English botanist who worked on tropical botany and the Durian Theory. 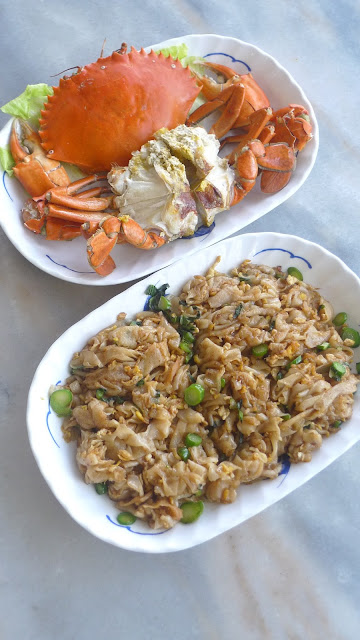 Last stop on our heritage and food trail was at Food Canopy. I didn't even know this food court existed in the Singapore Botanic Gardens! Di Wei, one of its 7 stalls, serves up Teochew tze char with dishes like Cold Crab, Cai Poh Kway Teow and Yam Paste. Tze char in the gardens! Psst...this food court even has a nutritionist to advise stalls.

It was fun outing to the Singapore Botanic Gardens exploring this national green space (and now also UNESCO World Heritage Site!) and the many F&B options it houses. Thank you to Dawn Wee and her team for hosting us.

Chew On This: Expect a slew of activities such as carnivals, music performances (Sam Willows, T'ang Quartet etc), movie screenings and exhibitions! Check out here for full details.
Posted by The Hungry Cow at 1:16 pm

Fencing installation is a crucial process. It needs a specialist contact and this is where a fencing installation technician is available in. You have to obtain referrals and proof of past functions carried out. This information will drop much more understanding of what it is such as dealing with that specific contractor click here.

I have learnt various good stuff right here, and I’m sure everyone will get advantage of it. Bookkeeping in Toronto

The vital information in this blogs has allured me.moonpig student discount

This is my very first time that I am visiting here and I’m truly pleasurable to see everything at one place.Mark Curry

Keep the balls rolling!! Nice posts you have given for us.

Every day I visit a number of blog sites to see content, however this offers quality based content.GeneralLiabilityInsure.com Reviews

This is a great post; it was very edifying. I look ahead in reading more of your work.Scott Lanzon

This text may be value everyone’s attention. How will I learn more?see this here

I hope you will share such type of impressive contents again with us so that we can utilize it and get more advantage.
goalclub.tv

Thank you for the information of this article.

The atmosphere is awesome.

Keep the balls rolling!! Nice posts you have given for us.สล๊อตออนไลน์

Hello.This post was really interesting, particularly since I was investigating for thoughts on this subject last Sunday. MM88UFA Thank You

Whatever you have provided for us in these posts really appreciative.
carpenter benistar

I hope you'll share such sort of impressive contents again with us in order that we will utilize it and obtain more advantage.