Catching Up at The Catch

Living in the ulu east of Singapore, it is always a delight when a friend suggests to meet up at an eatery near my place. Near my place you say? Yes! Moohehe.

Seeing that I now have moore time and less money, I figured I might as well take a leisurely walk to The Catch, a seafood restaurant nestled within a cluster of prisons. It was a catch up with foodie friends and that can only mean one thing- a great yummy time!

I didn't know my friend who made the reservation was a VIP here. All the staff seem to know her and she knows the menu inside out. Jokingly, we thought she was doing the PR for the restaurant! Moohaha. But nope. She's a regular here lah so we left the ordering to her. :) 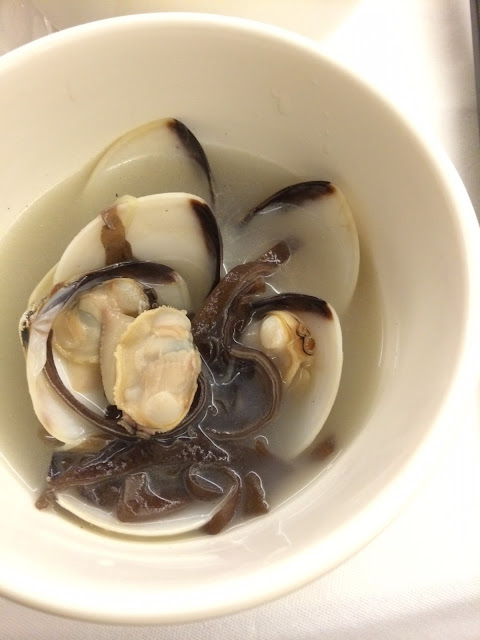 La La Boiled in Chinese Wine ($14 for small portion; the above was about 1/5 of the small portion) featured clams in a delicate and appetising broth of Chinese wine, ginger and strips of black fungus. 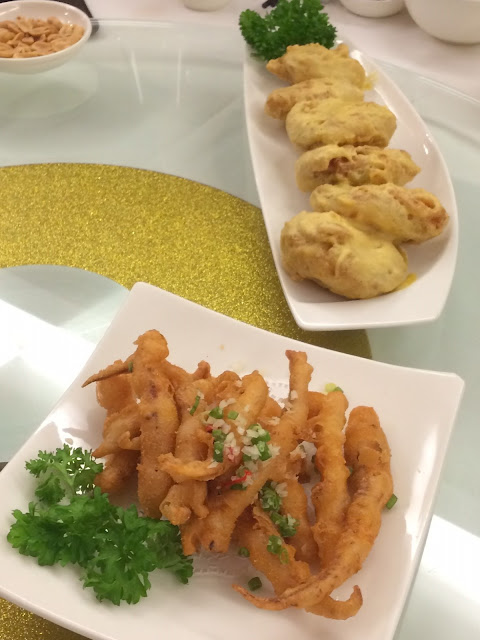 The Deep Fried Cuttlefish with Pepper & Salt ($8; foreground) were tasty pieces of firm cuttlefish tentacles battered and fried to a golden brown although the "oil taste" was a tad heavy. In the background, the Crispy Brinjal with Salted Egg Yolk ($6) beckoned with their crisp exterior and moist interior. Both would be great with beer! :p 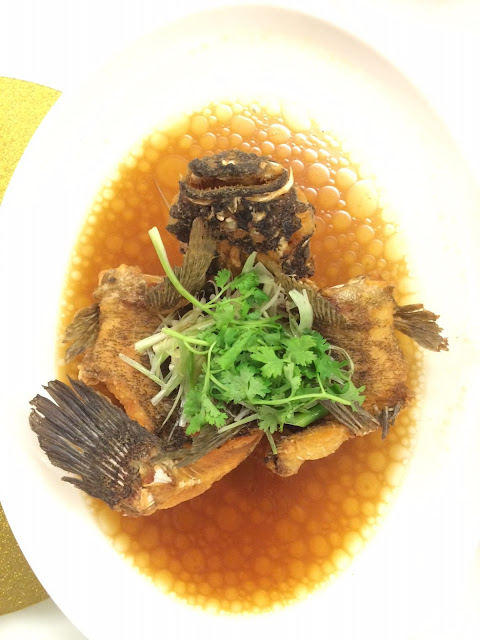 We also tried the Marble Goby Deep Fried with Superior Soy Sauce ($6.80/100g) which was excellent. The fish was perfectly fried and its flesh fragrant from the deep frying and the accompaniments. Now if only the bones were fried until crispy so they can be eaten... 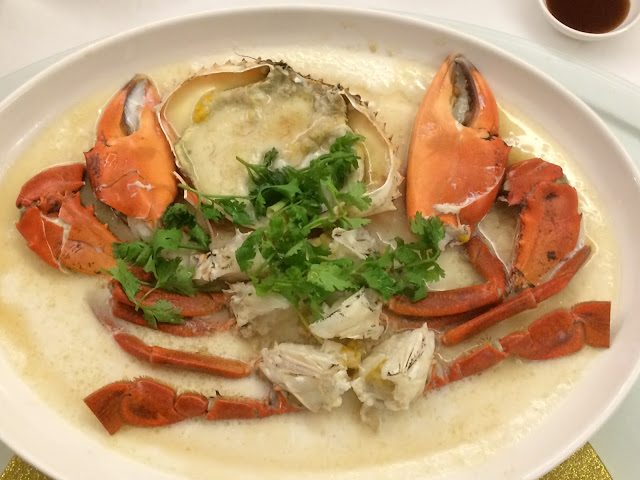 Originally wanting to order Flower Crabs, we opted for the Mud Crab Steamed with Chinese Wine & Egg White ($6.80/100g) as the former was unavailable that evening. I am not a big crap crab person but did enjoy its clean, sweet complementary flavours. Reserving some of the egg white, we separately ordered a plain wok-fried bee hoon to soak up all those lovely juices. 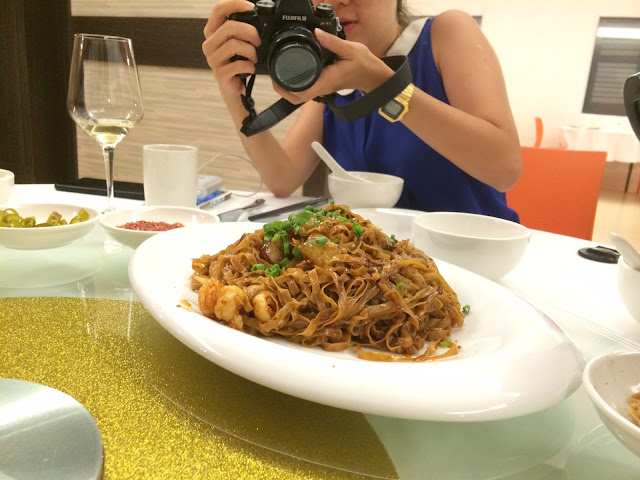 I was intrigued when told that the mee pok is a moost try here. Instead of the common bak chor mee version, it appeared as Braised Noodles with Seafood in XO Sauce ($28 for large portion). The depth of flavour was solid in this one! I could inhale the whole plate but had to restrain or risk ruining friendships. Moohaha.

As a second carbs dish, we had the "Yuan Yang" Poached Rice with Seafood in Superior Broth ($24 for small portion). I didn't take a photo but posted an Instagram video here. See and hear the puffed rice sizzle upon hitting the hot soup! 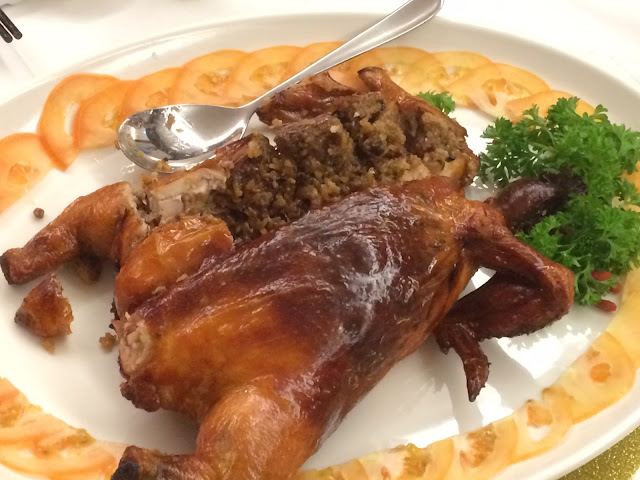 Lastly, we had the Signature Roast Chicken Stuffed with Glutinous Rice ($45) which needed to be ordered a day in advance. The meat was a little dry but its taut glistening skin and flavourful glutinous rice stuffing made it scrumptious nonetheless. Glutinous rice after two carb dishes plus a bowl or white rice. Ok, I think that's why the Titanic sank. #itwasnoticeberg LOL 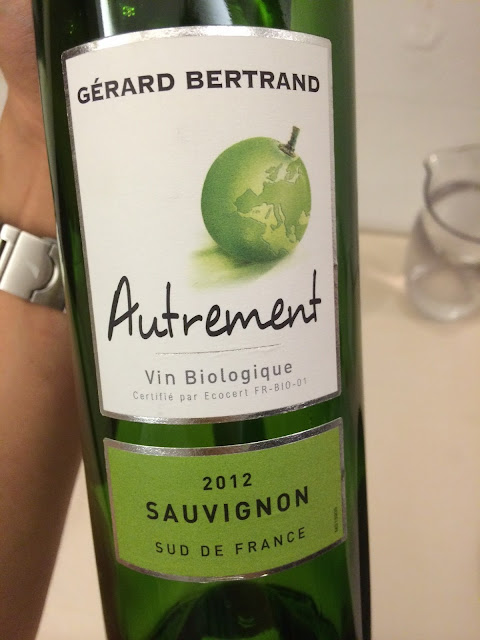 An organic Gerard Bertrand Autrement Sauvignon 2012 from the South of France boasting citrus notes and medium acidity was the night's tipple.

With good food and a unique location (moohehe), The Catch is certainly a good catch! Hey by the way the owners are seafood suppliers hor, so you can be guaranteed of fresh seafood.

Chew On This: Feel free to BYO. Corkage-free!
Posted by The Hungry Cow at 11:49 am