Chap Gor Meh or the 15th and final day of the Lunar New Year is not really celebrated as much anymore so it was Mum's desire to gather the family for one last hurrah as a close to CNY. Keeping it simple (which is very subjective in her case. Moohaha), a prawn noodles party at my home was planned for. 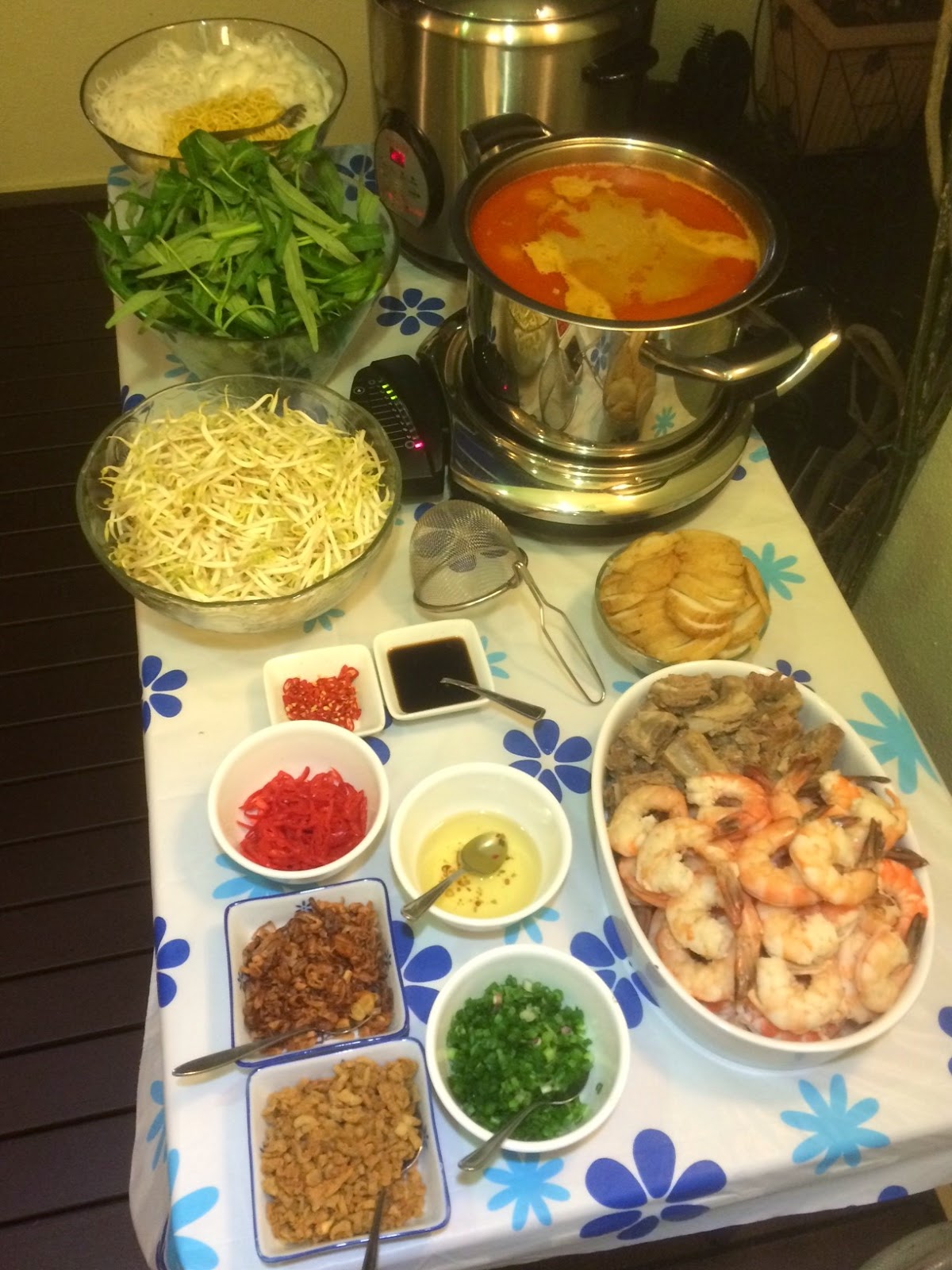 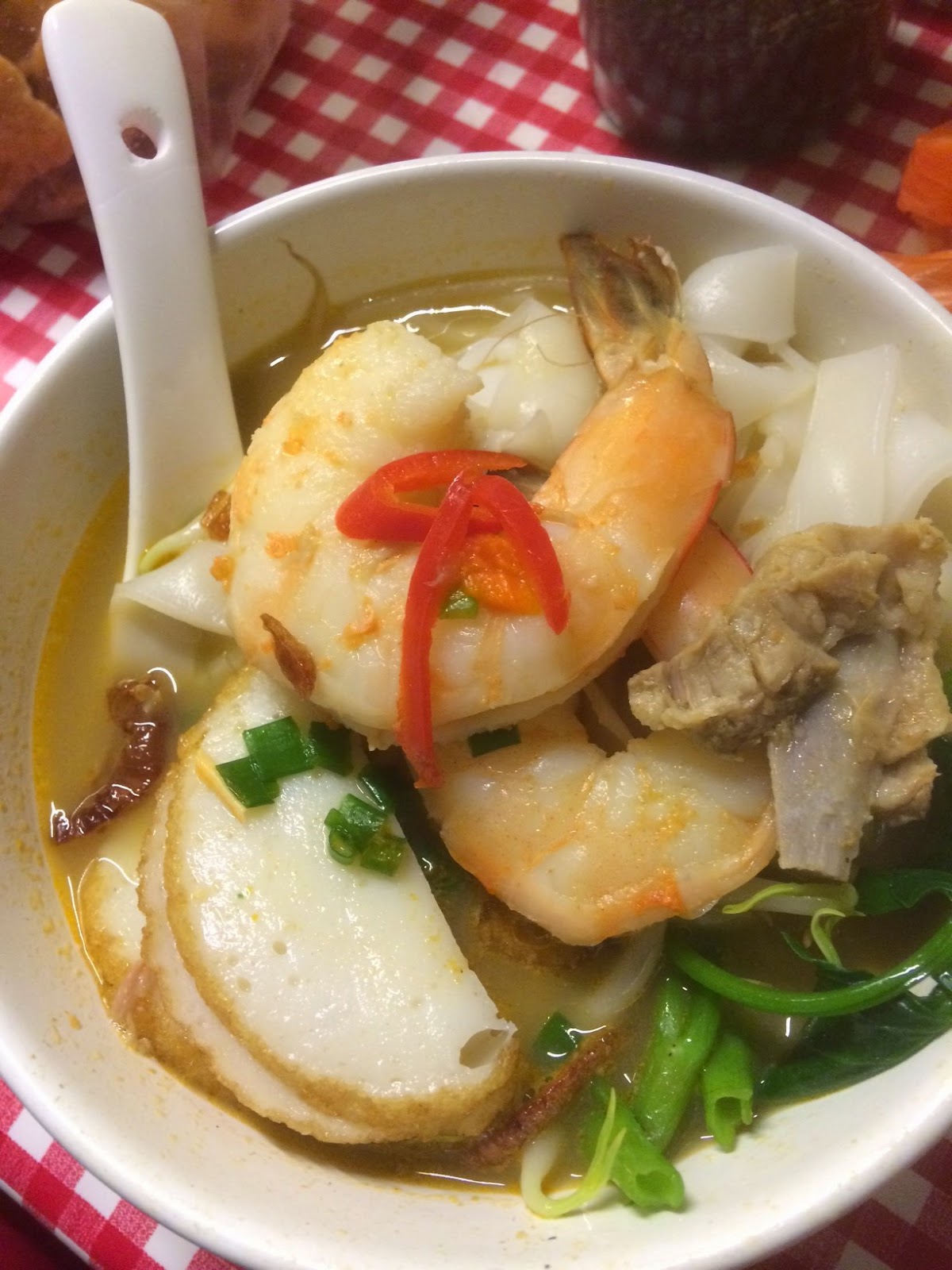 It was a very heartwarming bowl of prawn noodles, especially knowing the effort that Mum had put it. :) So this cow reciprocated by emptying 4 bowls of it. Moohehe. 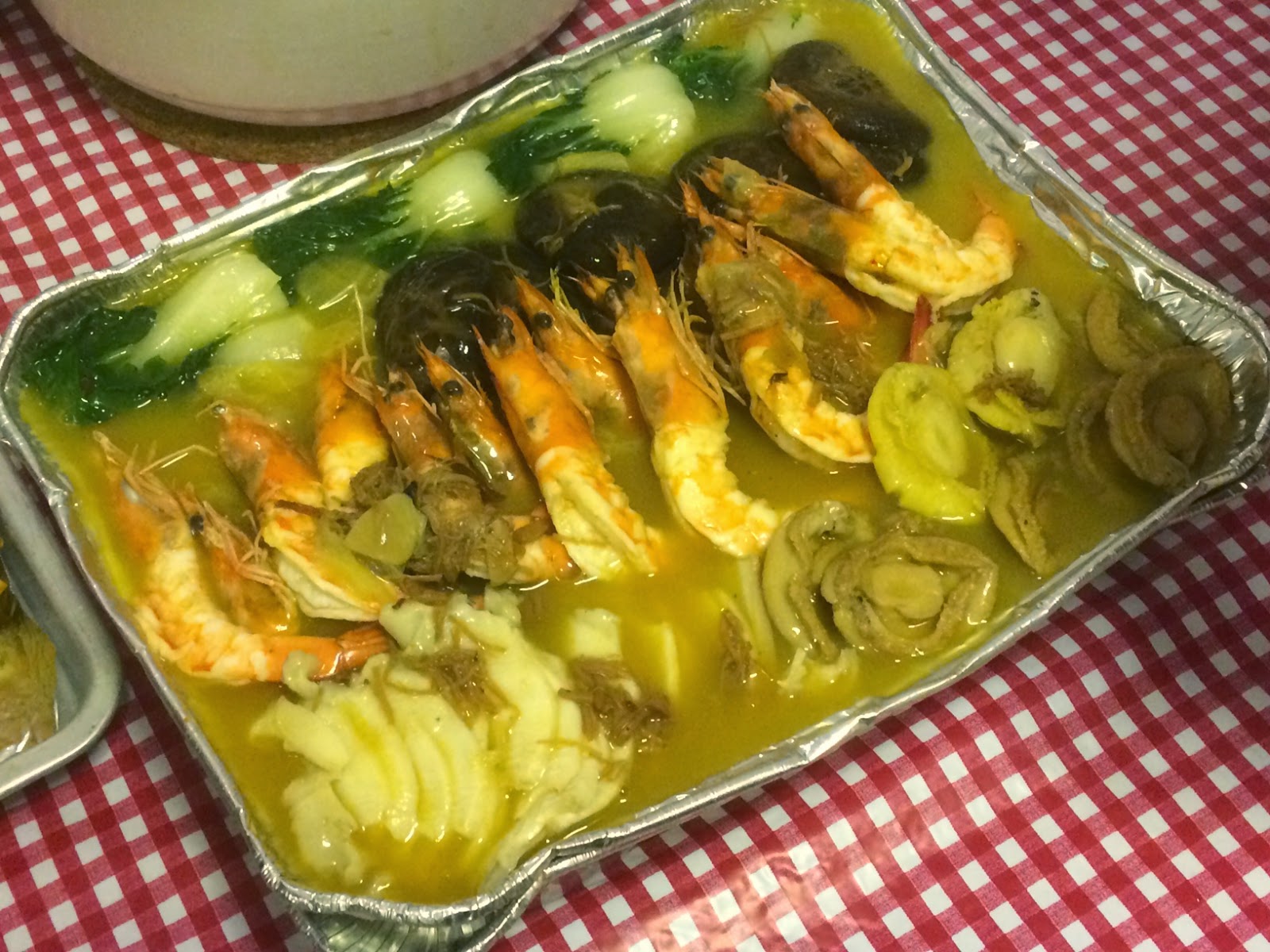 A tray of Poon Choy with the usual goodies provided the CNY touch to the dinning table. 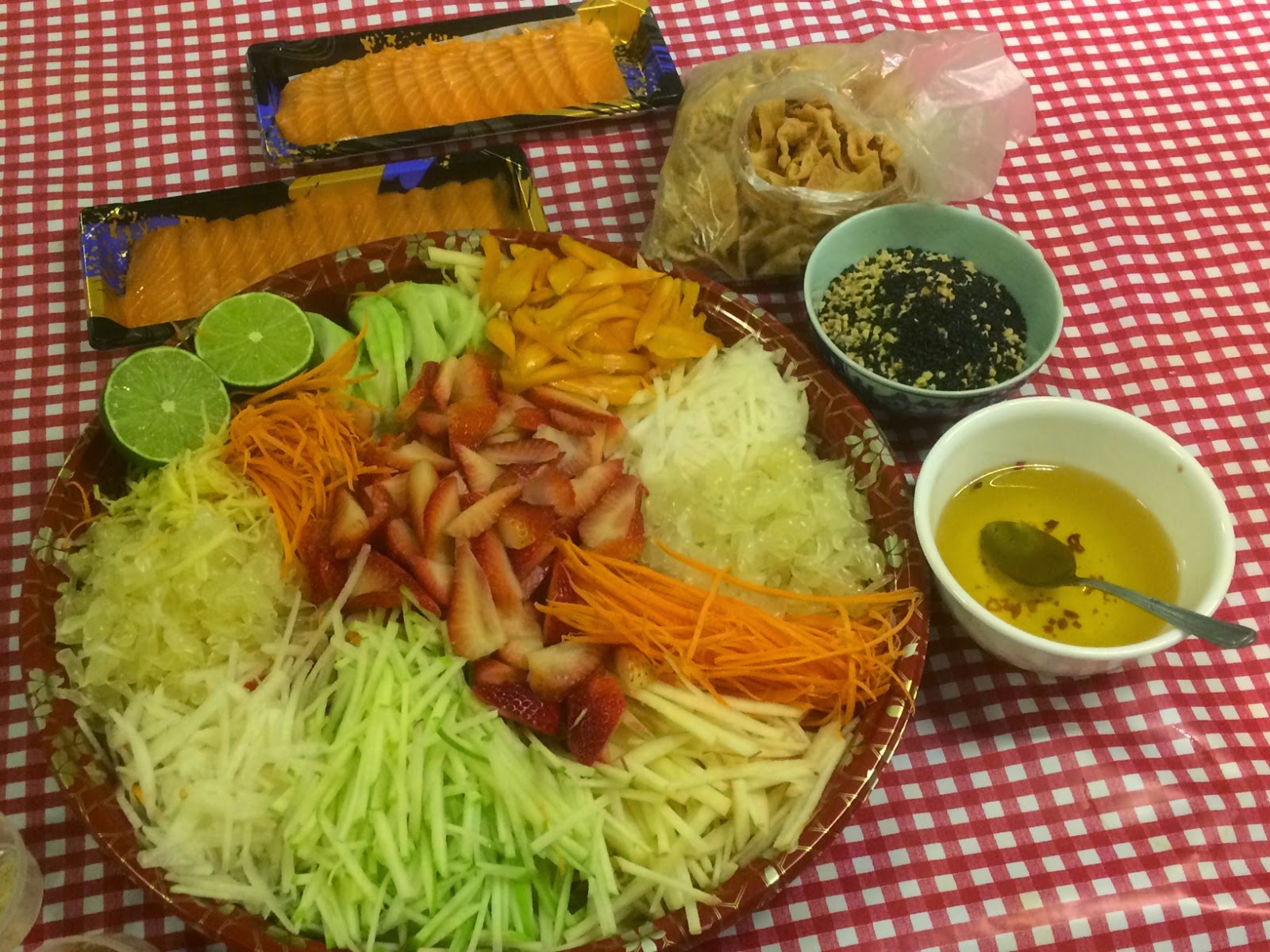 Yu Sheng (and probably the healthiest, lightest one I've tasted) rounded up the Chap Gor Meh dinner with tossed up goodness and blessings of abundance.

It's not the photo taken at Chap Gor Meh but it's a moore complete one with everyone (I think) in.

Till the next CNY! Huat ah, everybody! 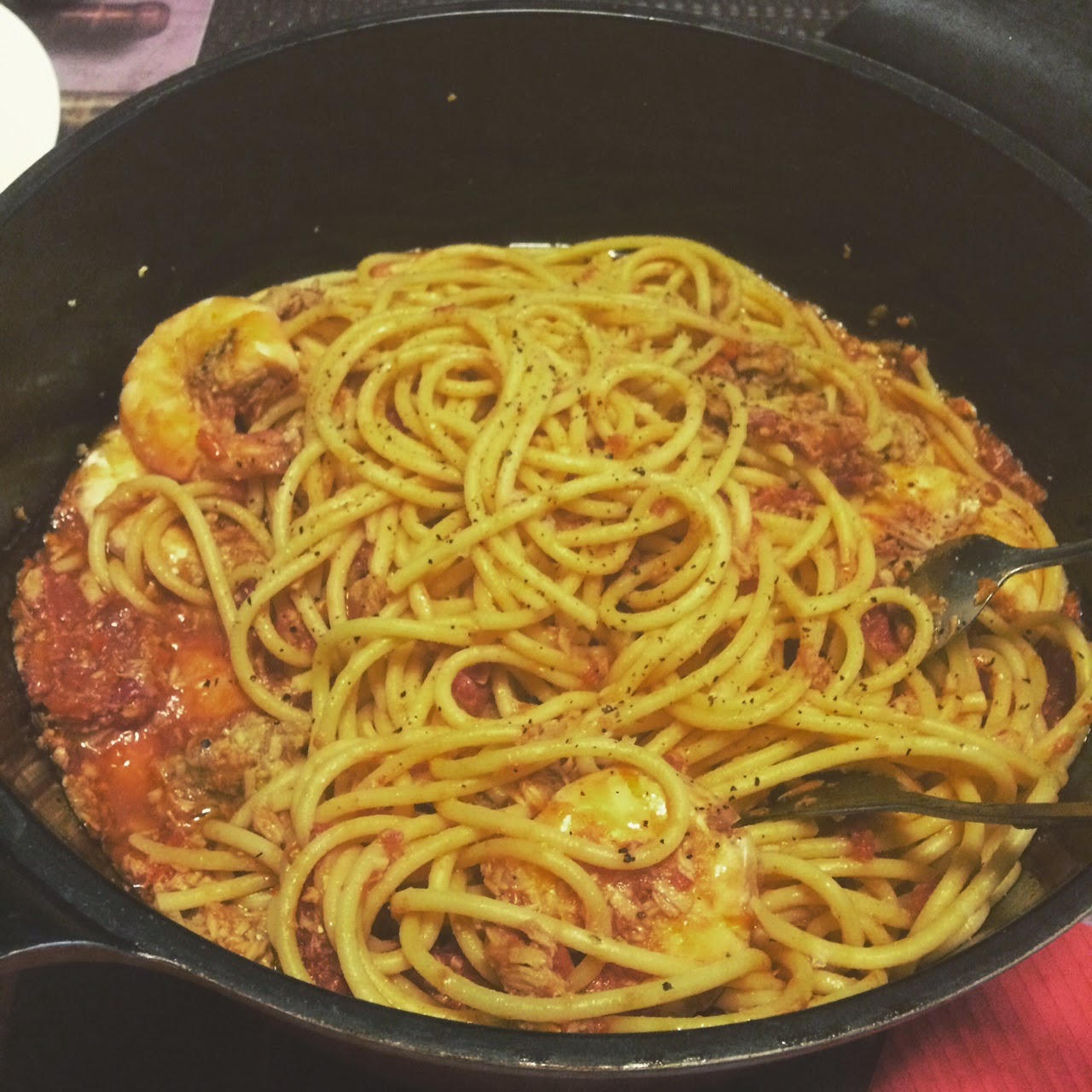 I don't really order pasta when dining out moost of the time because:
1) It is expensive
2) Don't like the taste of pasta
3) The portions are too ungratifying

Hooves up if you are like me and chose number 3! Moohehe.

My favourite place for pasta is actually at home, where I can do whatever I want with it and cook up a portion fit for a...well...hungry cow! LOL.

Here's an easy masak-masak recipe I whipped up for moo sister and mooself one weekday evening.

1) Throw pasta of choice into salted, boiling water. Stir to ensure they don't stick to each other.
2) Heat up olive oil (basil-fused olive oil lagi better!) in a pan/pot.
3) Add prawns. Cook, flip over and cook until about 70% done.
4) Add in chopped garlic and stir-fry until fragrant.
5) Add in tinned chopped tomatoes and canned tuna.
6) Transfer cooked pasta to the pan/pot and include a little of the pasta water.
7) Salt and pepper to taste.
8) EAT

It's been (I think) almoost 10 years since I had last dined at Shimbashi Soba and so I was very excited to return to relive the fond, delicious memoories. What I just said also means that if they depended on my business, they would probably be out of business. Moohehe. 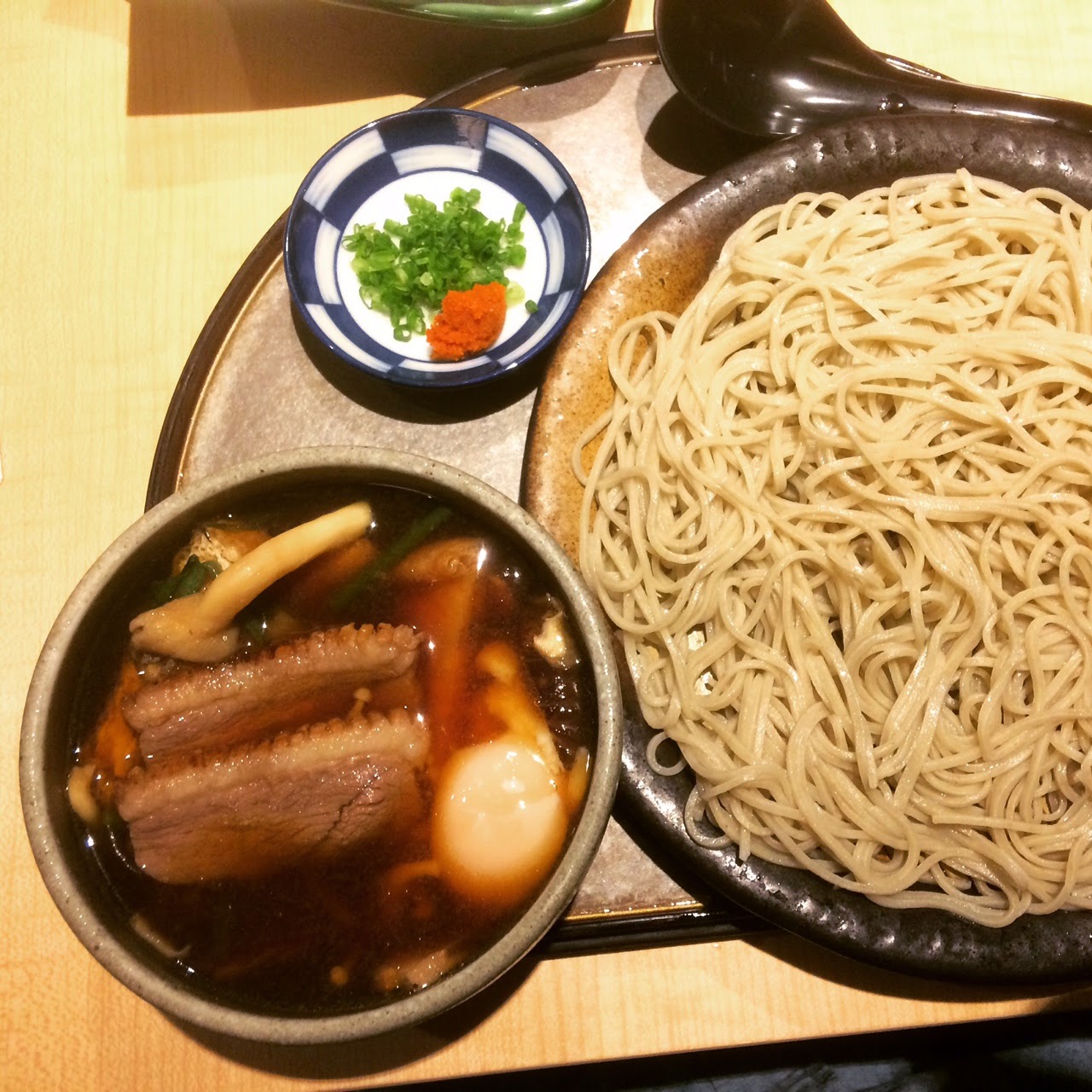 My Yuzu Kamo Tsukemen Seiro Soba ($21.80; additional $5 to upsize the soba) hit the right spot with chilled soba served with a hot bowl of quite intensely flavoured broth. Dip a few strands of soba into the broth and slurp up for a cold-hot effect. The soba was delightfully firm with a slightly springy texture while the broth was savoury, salty and sweet. Shitake and abalone mushrooms, veggies, slices of French duck breast, tau pok and a soft boiled egg sat in the tasty broth. On the side was chopped spring onions and a dab of yuzukosho; the latter added a lovely zesty, spicy kick. 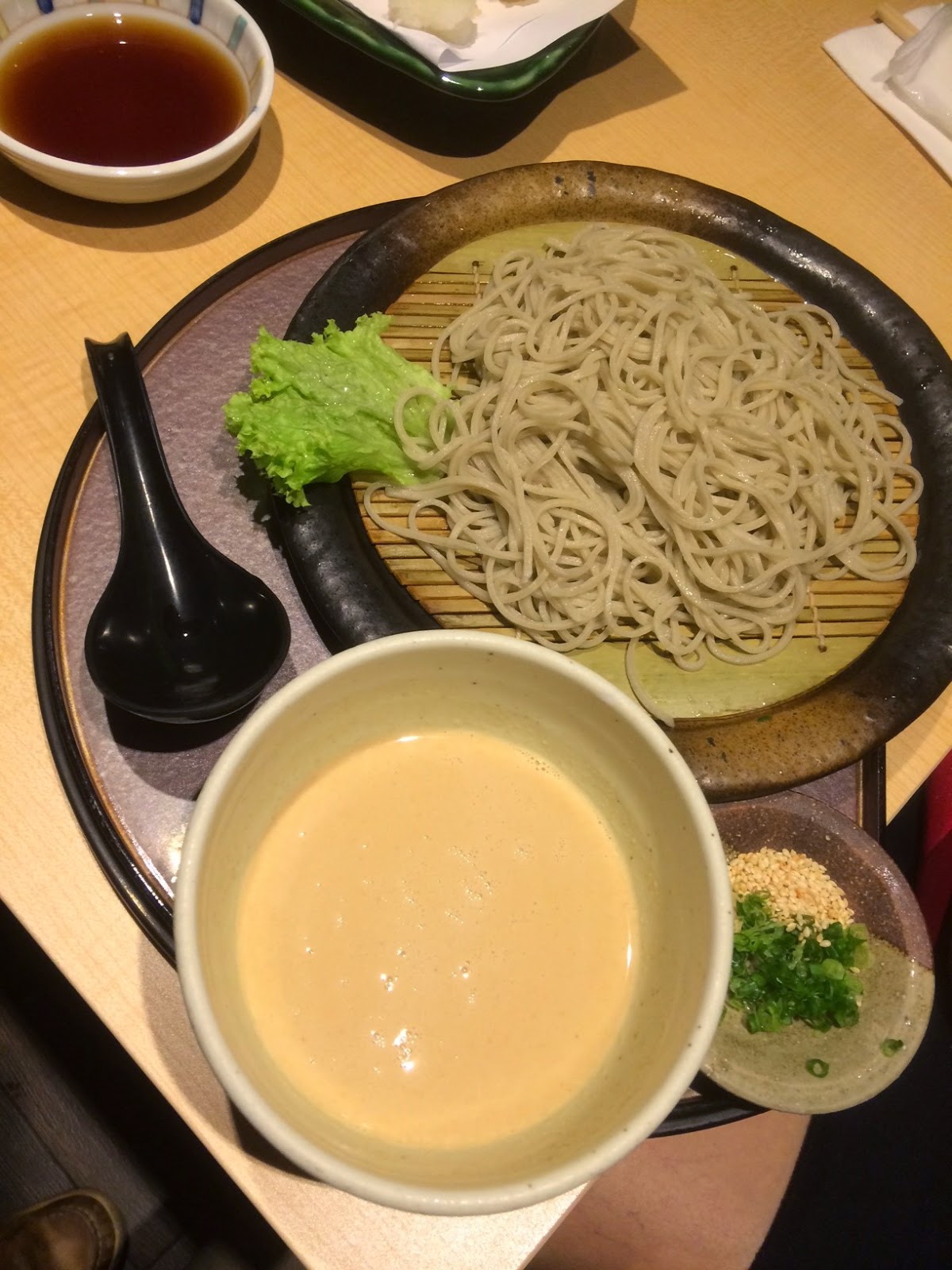 For a totally chilled soba experience, try the Gomadare Seiro ($15.20) which was refreshing and simply served with a creamy sesame sauce accented by grated ginger. 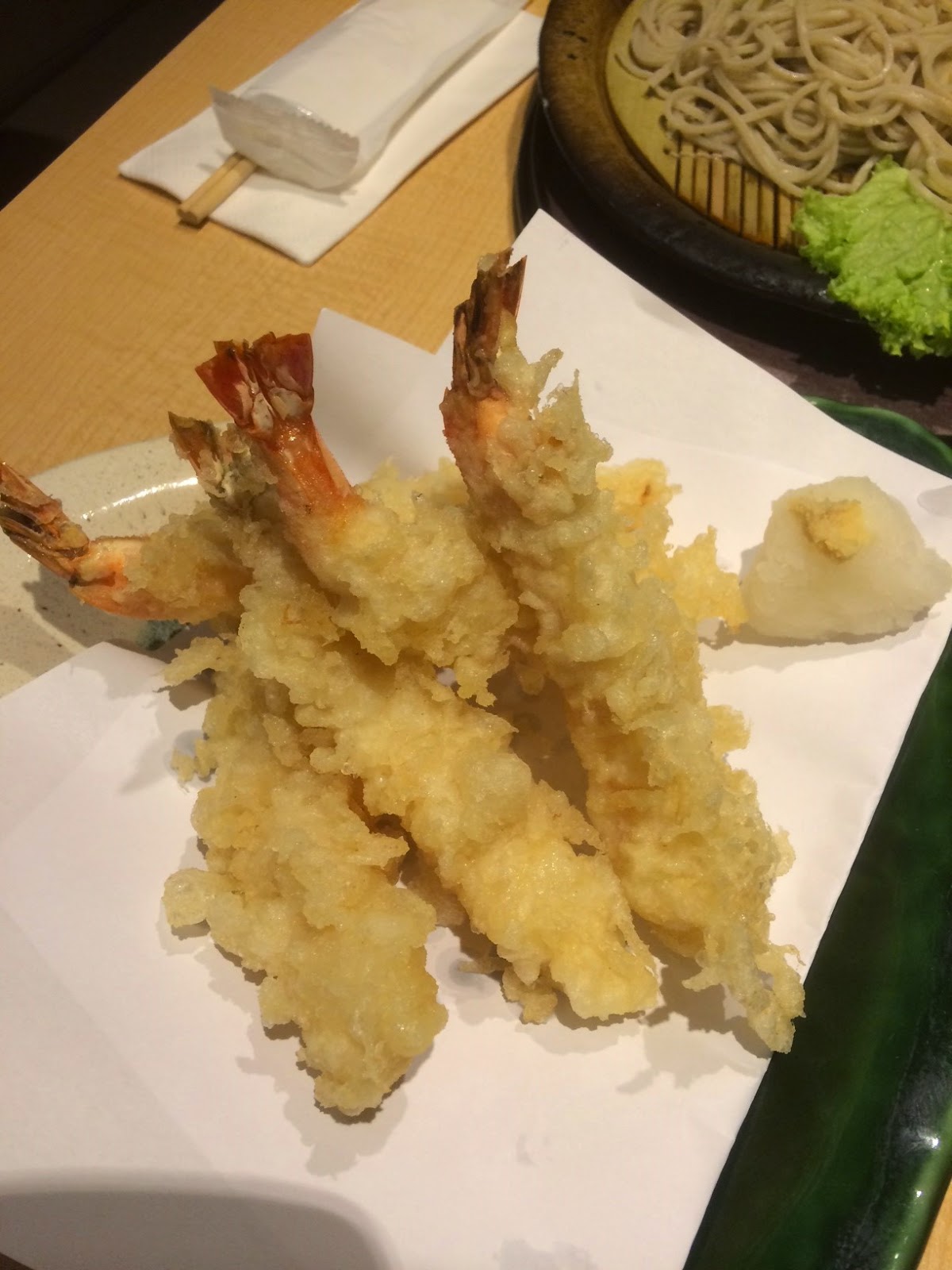 Ebi Tempura ($19.80 for 5 pieces) made for good accompaniment to the soba. Decent without being soggy nor reeking of rancid oil. 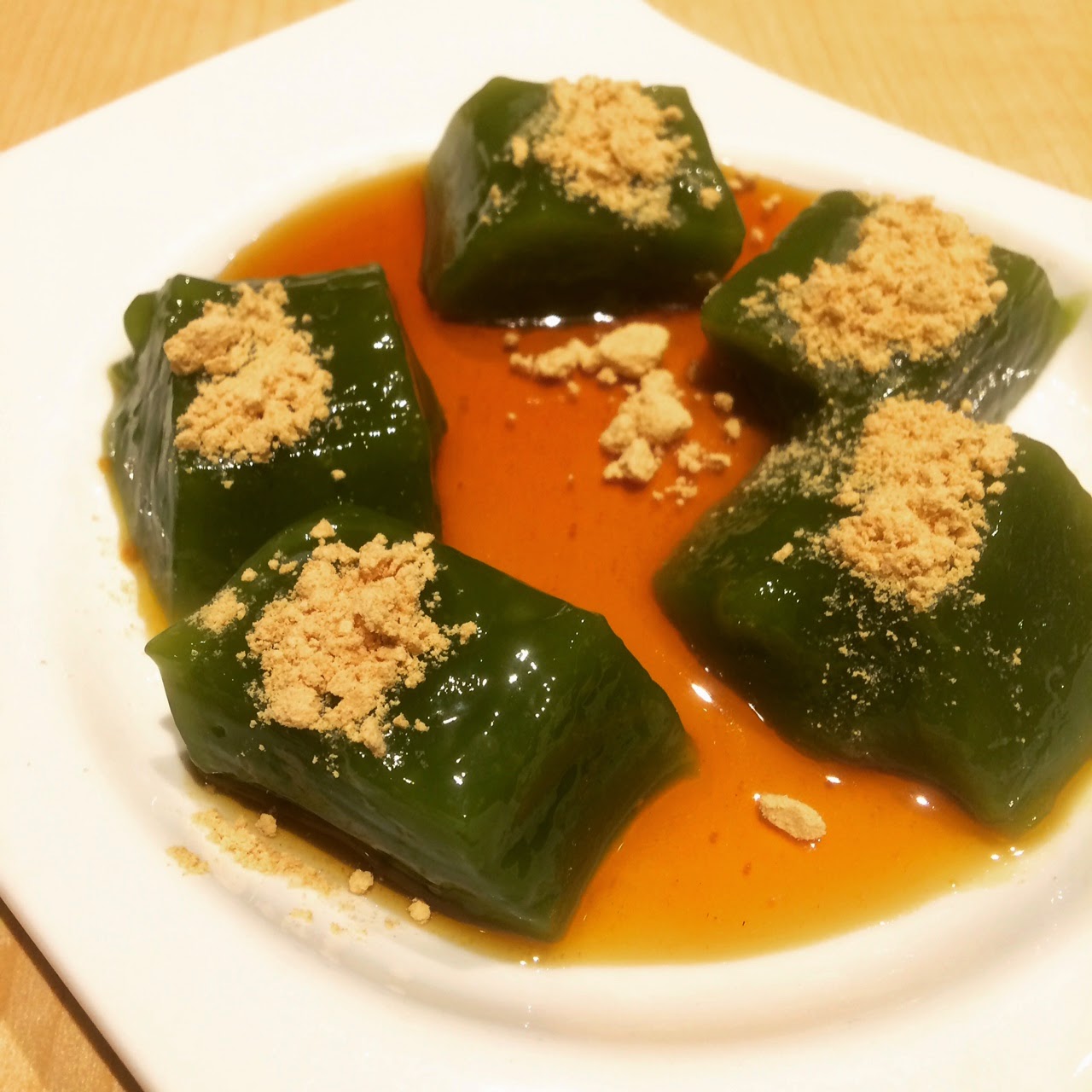 For desserts, the Matcha Warabi Mochi ($5.80) is something this non-dessert-loving cow is happy to have any time! Not too sweet, the cubes of mochi were made in-house and had a pleasant gummy texture without being heavy or stodgy. I enjoyed the slight bitter flavour of the matcha balanced by the syrup. A sprinkling of kinako (roasted soybean flour) imparted some textural contrast.

I don't why it took me 10 years to return but I'm quite sure my next visit would not be that long! Moohehe. 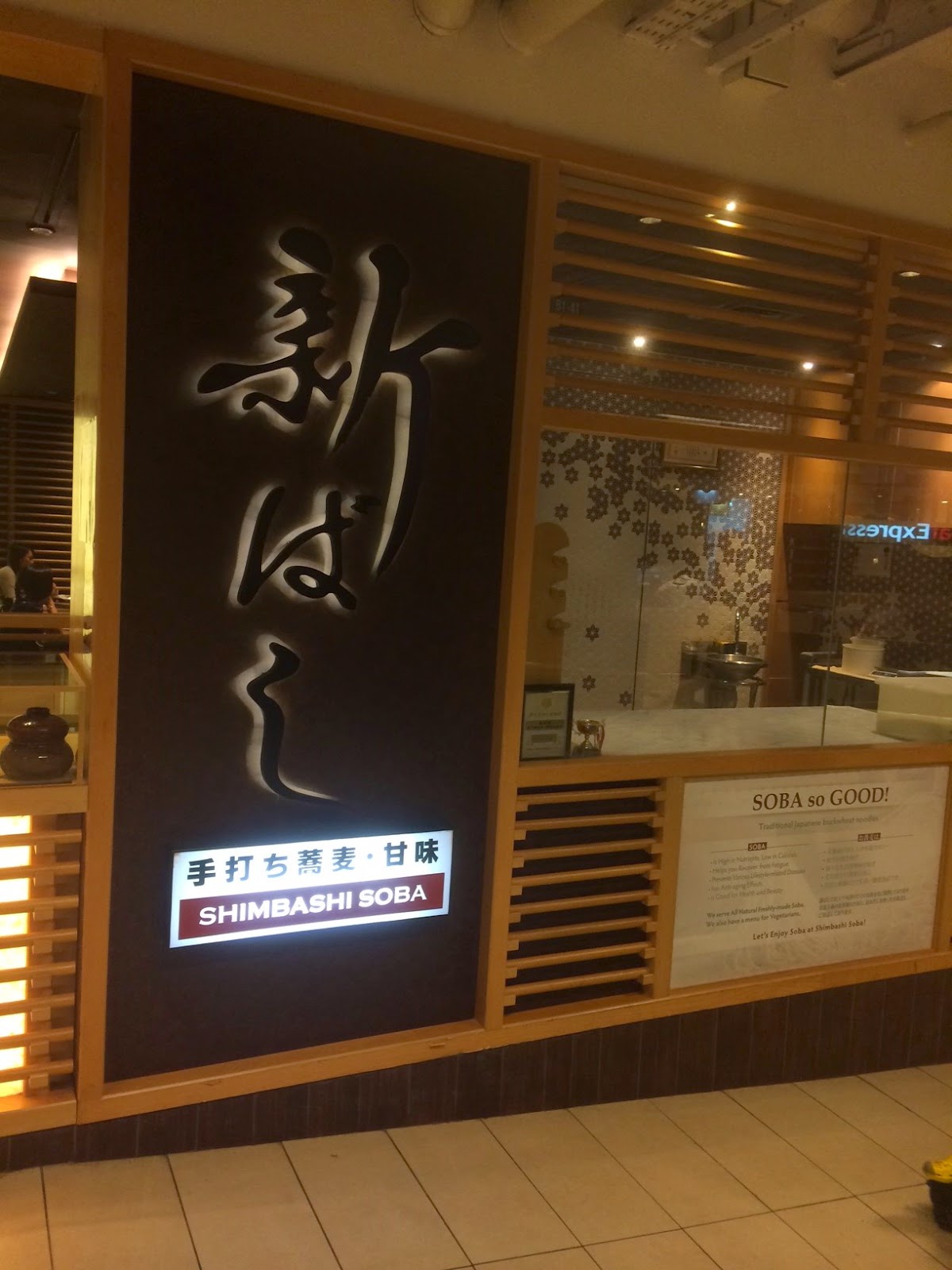 Chew On This: Shimbashi Soba makes its own soba on-premise from nothing moore than buckwheat flour, wheat flour and water. Come at the right time and you'll see a chef making soba at the open kitchen!
Posted by The Hungry Cow at 7:51 pm No comments:

My favourite month of the year is December. The feeling when 1st December arrives is just pure joy in anticipation of the the festive season, feasting, and general merry feeling all around. As per usual, the maternal family gathered at and celebrated Jesus, the reason for the season, at my place with.. 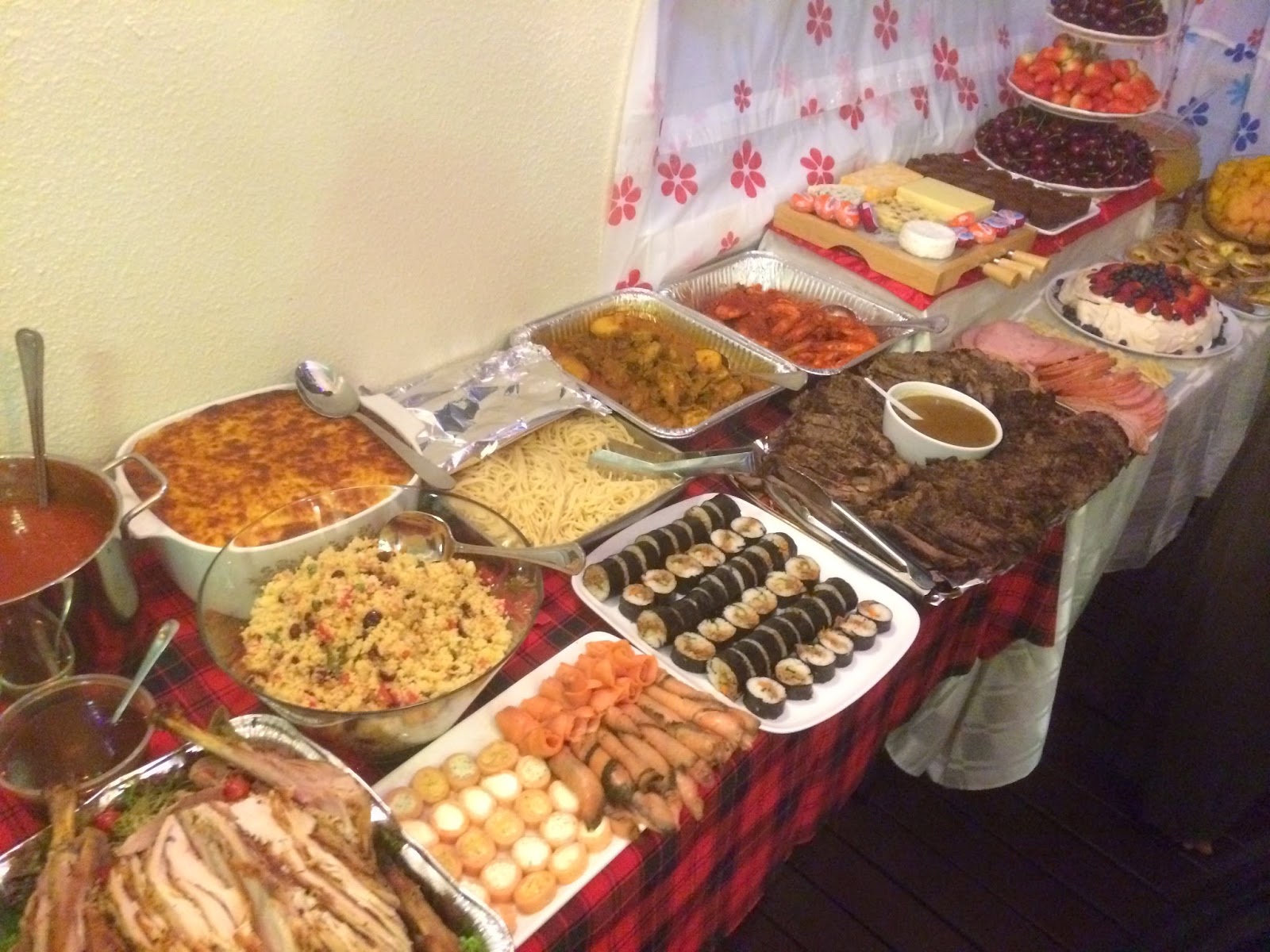 ...an array of yummies contributed by the various relatives pot-luck style! Christmas carols and a time of praise and worship sealed the gathering. 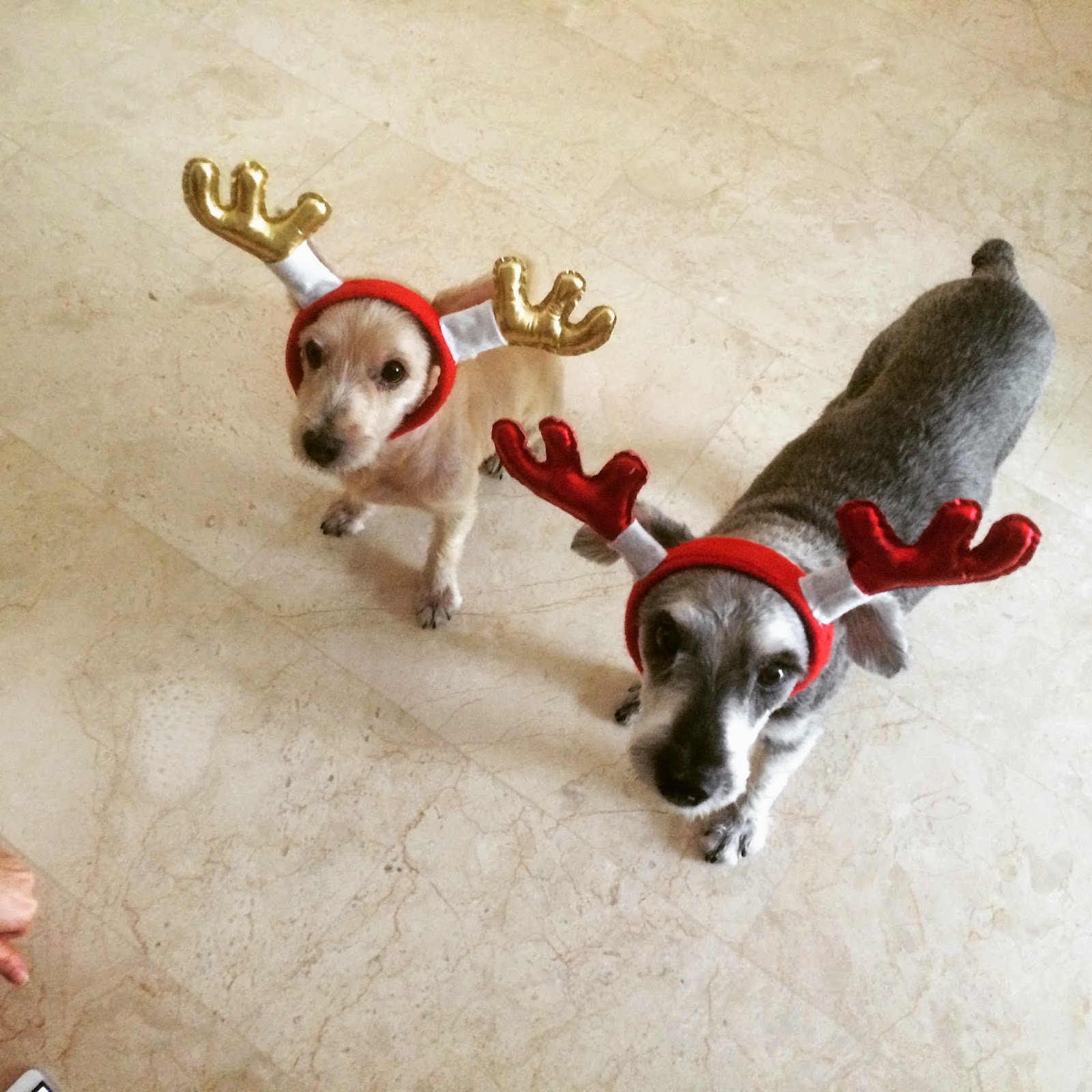 And look! My part-time reindeers! Moohahaha. Ok, I admit, we had to lure them with a bit of food to keep them still for this photo. See the hand at the left corner of the photo. But so cute lah! :D

Over at the office, colleagues and ex-colleagues had a party too. Lesson learnt: Never have the office cactus involved in beer pong. LOL. 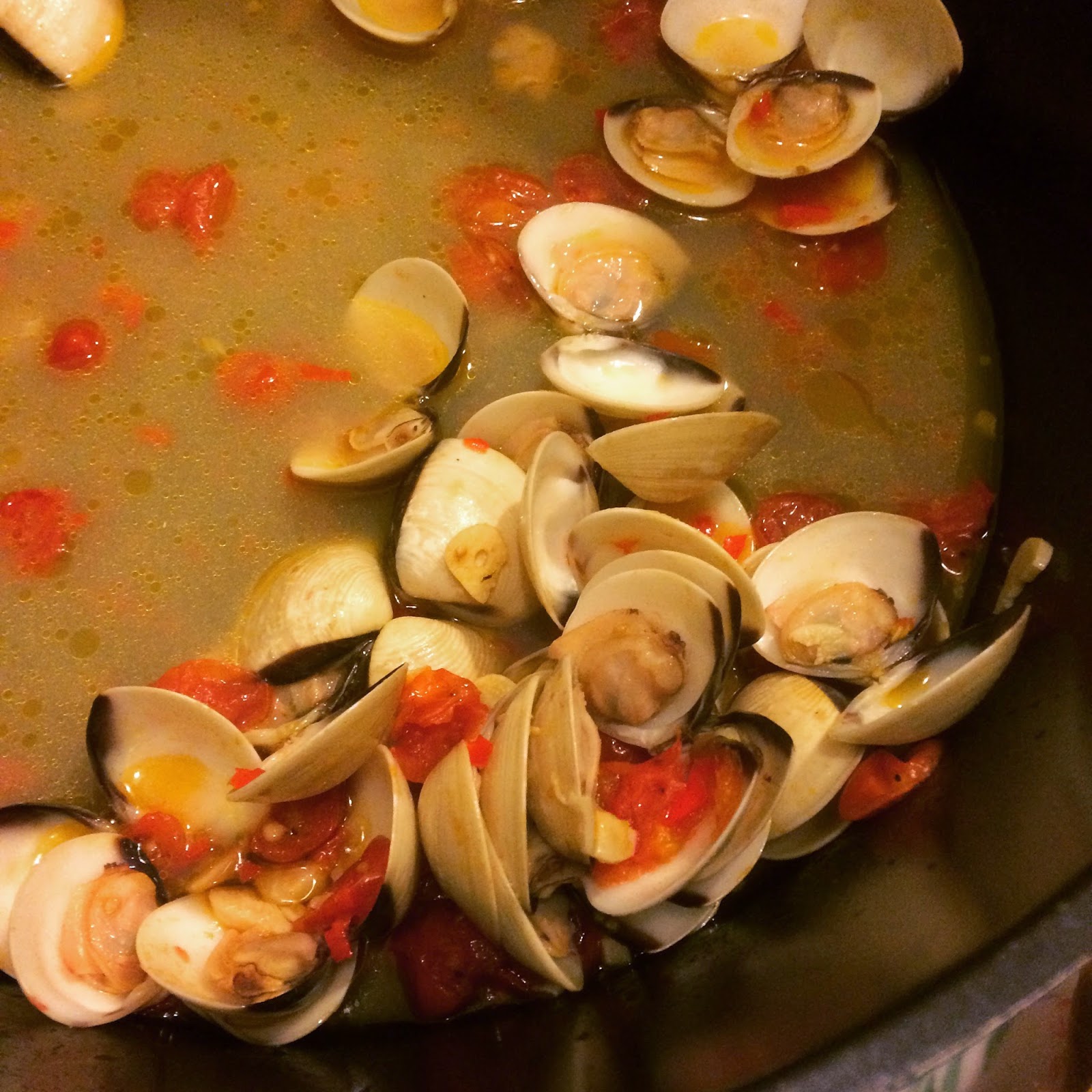 I was on leave for over 1/2 the month so had time to cook quite a bit in December. Here's the Venus clams cooked in white wine which I moost have cooked like 4 times in the same month. Moohehe. 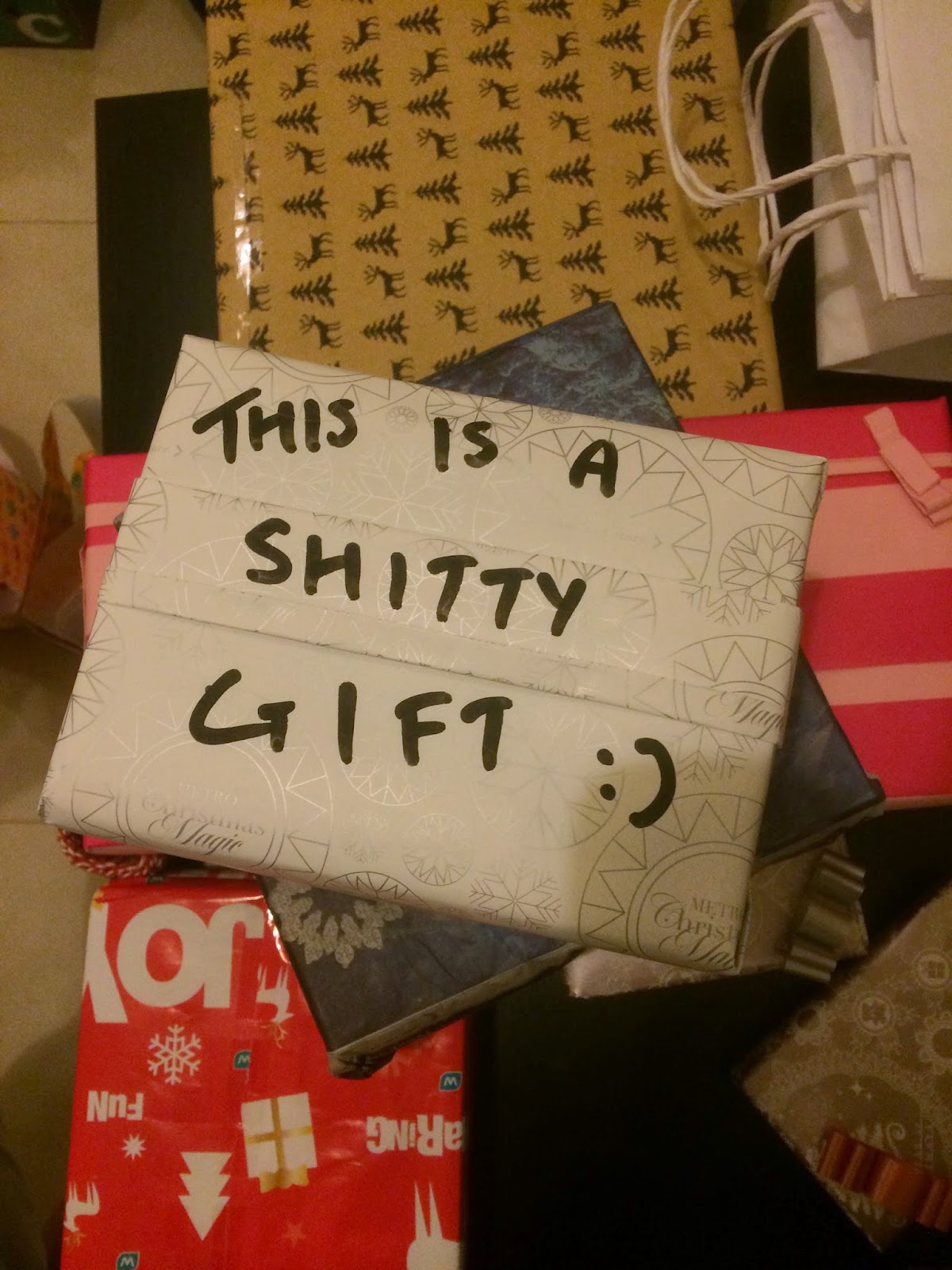 Office gift exchange time! Well, I did put a little warning on mine which some thought was reverse psychology! #seemetooup

*Gotta thank relatives and colleagues for some of the photos!
Posted by The Hungry Cow at 7:46 pm No comments: 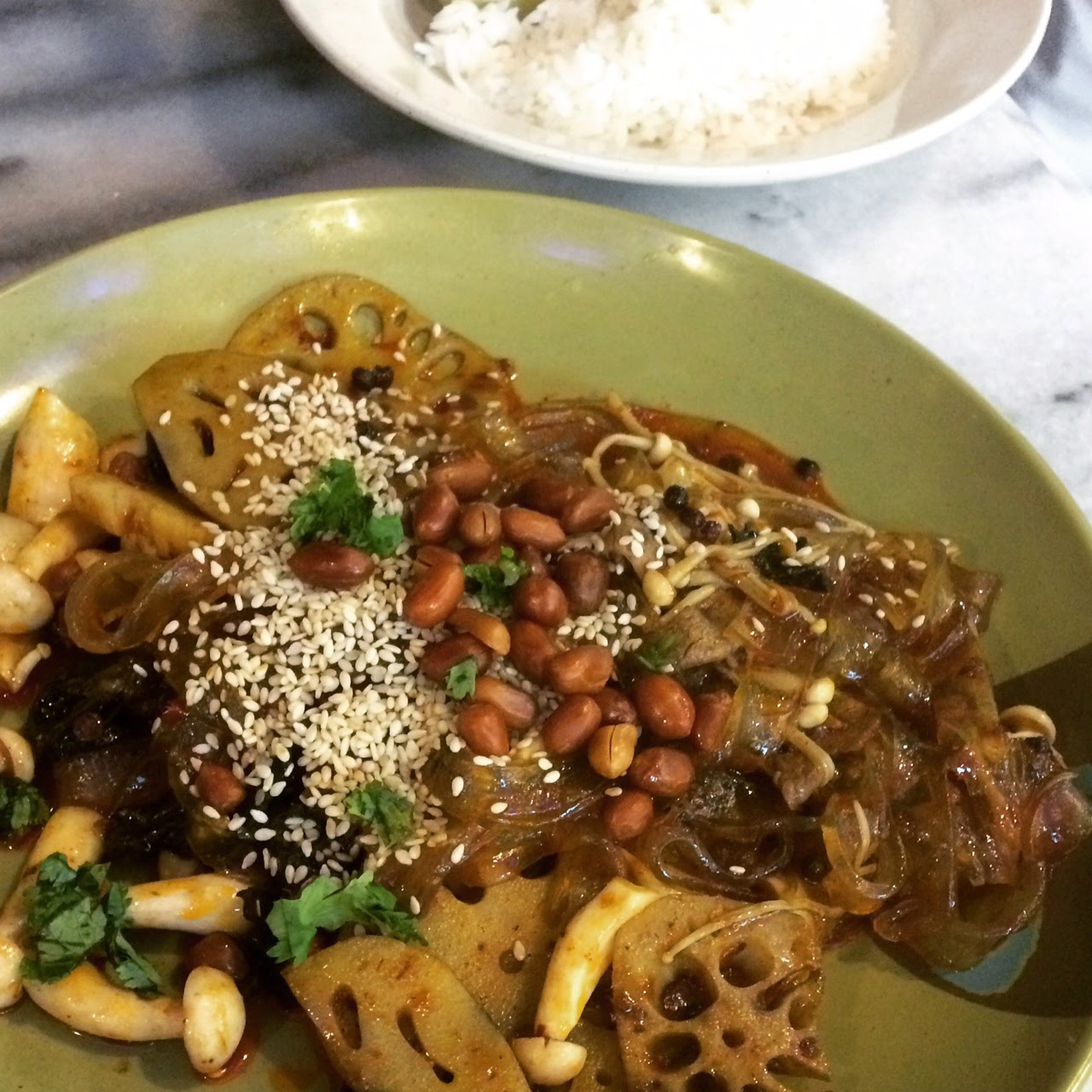 One of my latest favourite haunts is 味之道, a new stall serving up mini steamboat and mala fragrant wok at Simpang Bedok.

The Mala Fragrant Wok has a base of $2.50 to cover the cost of spices and cooking one's selected ingredients ($1.50 to $2.50 each). We picked a scrumptious combination of lotus roots, black fungus, mushrooms, venison and QQ chewy noodles. These were stir-fried in a wok with mala spices for a moderately spicy, numbing effect which beckoned for rice. Ask them to increase the spiciness if you are a chilli head! Moohehe. 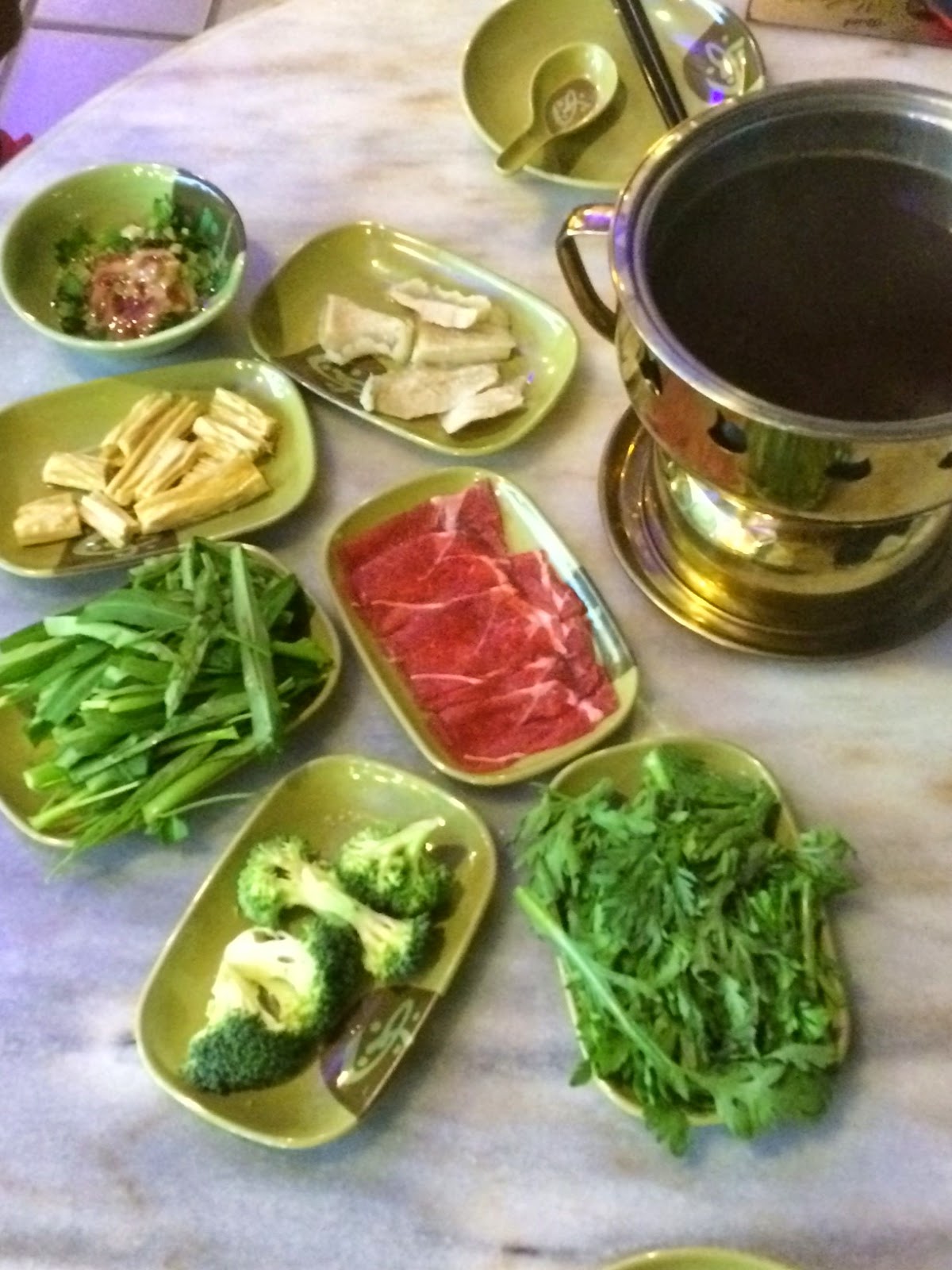 Also good to eat here is the Mini Steamboat ($3 for soup base) which offers Tom Yum, Mala, Tomato and Mushroom soup stocks. We tried the mushroom soup and loved its deep earthy flavours with a gentle sweetness. Clean and light, it was a delight to drink. Pick ingredients like veggies, seafood and meats for a simple but enjoyable steamboat. 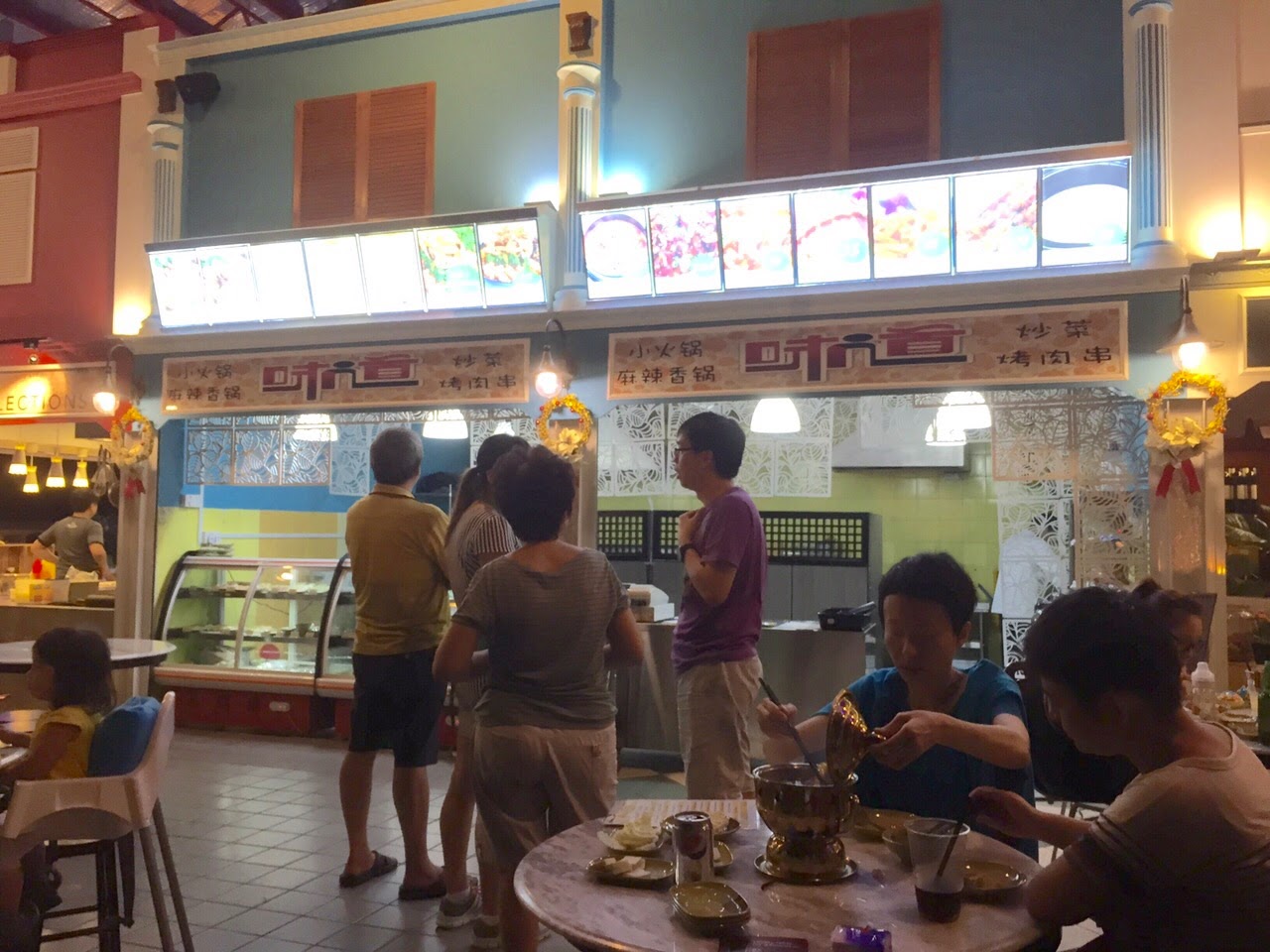 Chew On This: Enjoy this with an ice cold beer or even some sake and wines from the neighbouring stalls!
Posted by The Hungry Cow at 11:43 am 3 comments:

Salad Buffet and A Bit of Meat

It is inevitable that festive seasons almoost always result in joyous feasting. To assuage the holiday assault waves of turkeys, ham and log cakes, a salad buffet does wonders to the body and soul.

So instead of being tempted by ramen, pizza and steak frites, I and the Hushie headed to Bistro 1855 for a Salad Buffet ($12.90). Available only during 11am to 3pm, it was a leisurely graze over lunch. After all, we were both on leave. Moohehe. 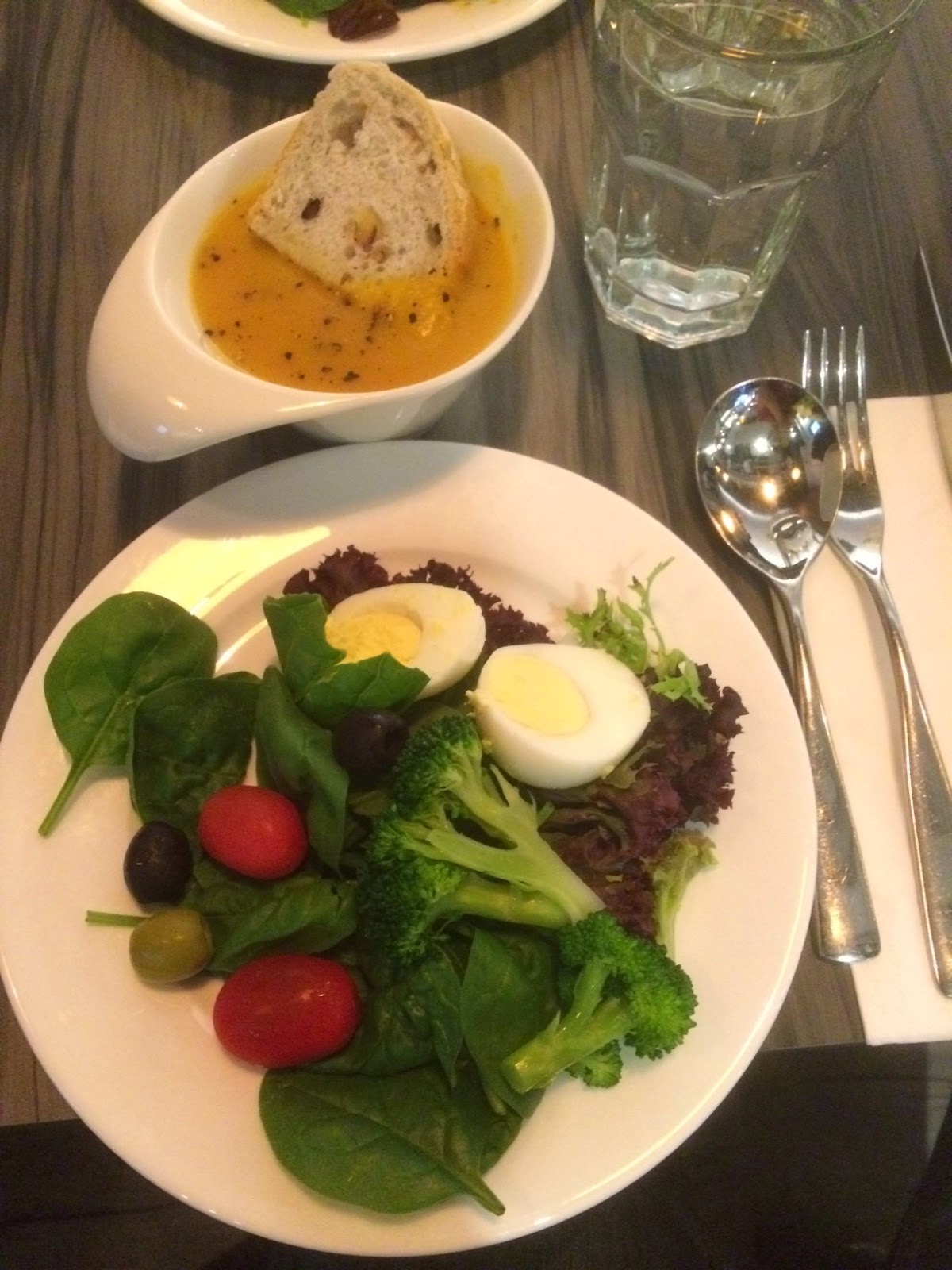 Enjoy an ample leafy selection of romaine lettuce, baby spinach, cherry tomatoes, broccoli, olives, meslcun leaves, hard-boiled eggs etc. A soup, which happened to be pumpkin before it was replenished with asparagus, and assorted breads were also part of the salad buffet spread. 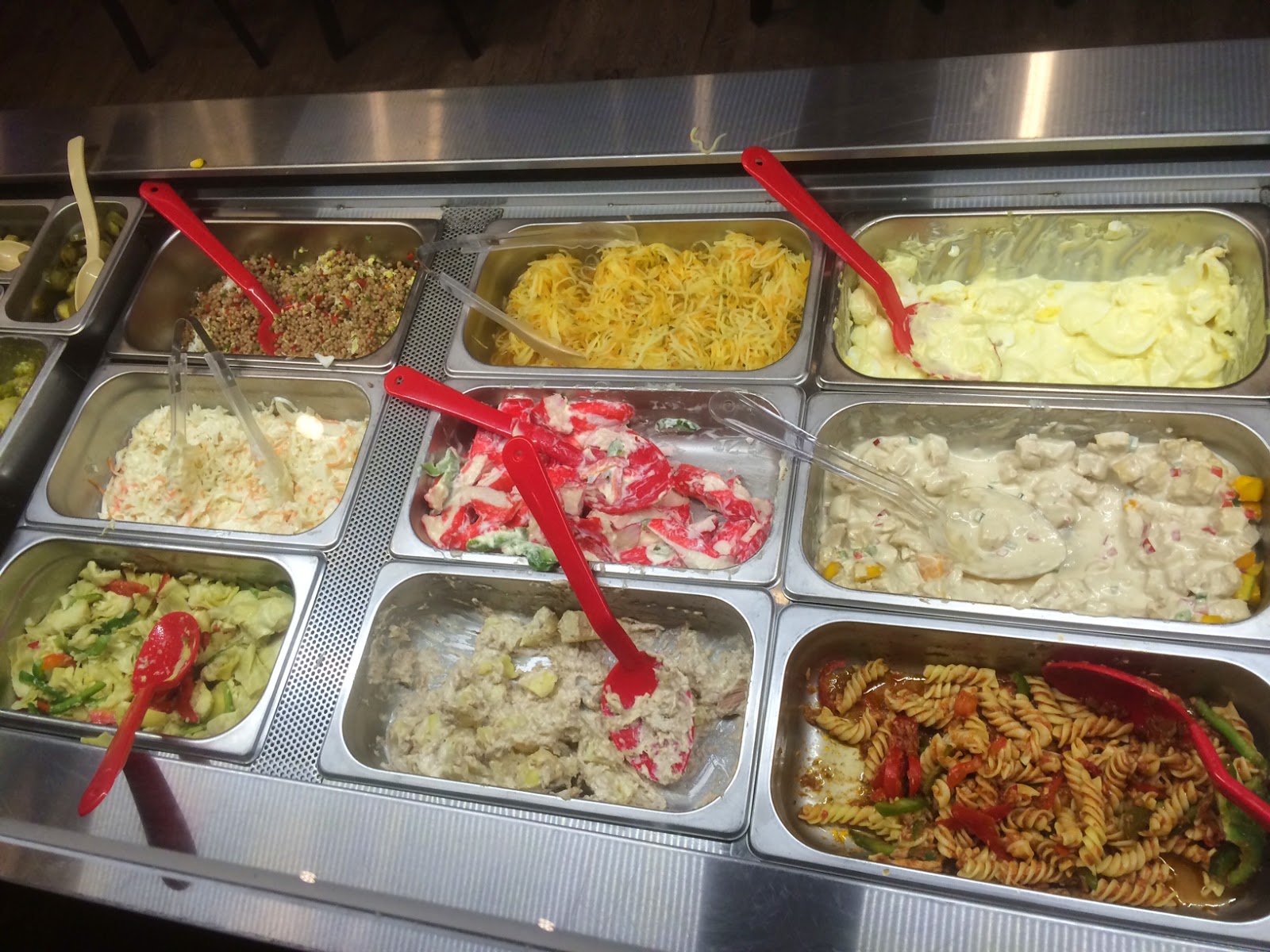 Besides grass leaves, various chilled pasta, tuna and potato salads added to the variety. Guacamole and salsa with crisp corn chips also made for nice nibbling.

If only they had a selection of cheeses! But I think for the price, I might just be greedy lah. Moohaha. 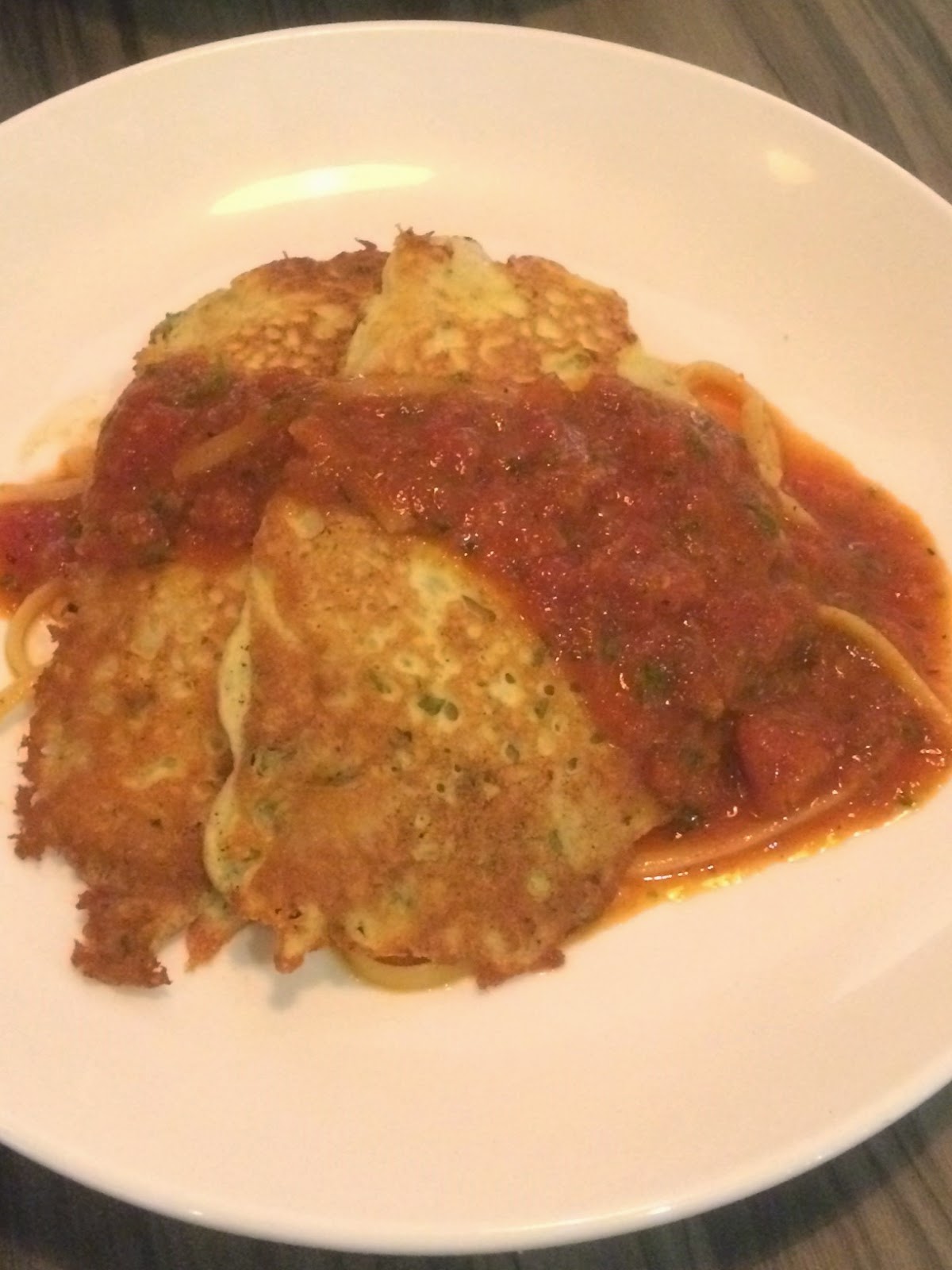 Add $5 to the salad buffet price to get a main course. I opted for the Pork Piccata which turned out to be kinda like a pork omelette (wish I had this with rice!) served with spaghetti in a tomato sauce.

And then it was time to catch The Hobbit! Ah, the simple thrills on being on leave and doing things which would have otherwise been impossible to do. :)

Chew On This: With prices of wines and beers by the glass at just $7 each, a drink here is pretty tempting too. After all, it complements the salad buffet and doesn't count as meat ya? MOOHAHA.
Posted by The Hungry Cow at 11:13 pm 1 comment: