I was secretly very happy when I heard that the next makankakis dinner was to be at Jin Long...because it's near home in the east. Moohehe. 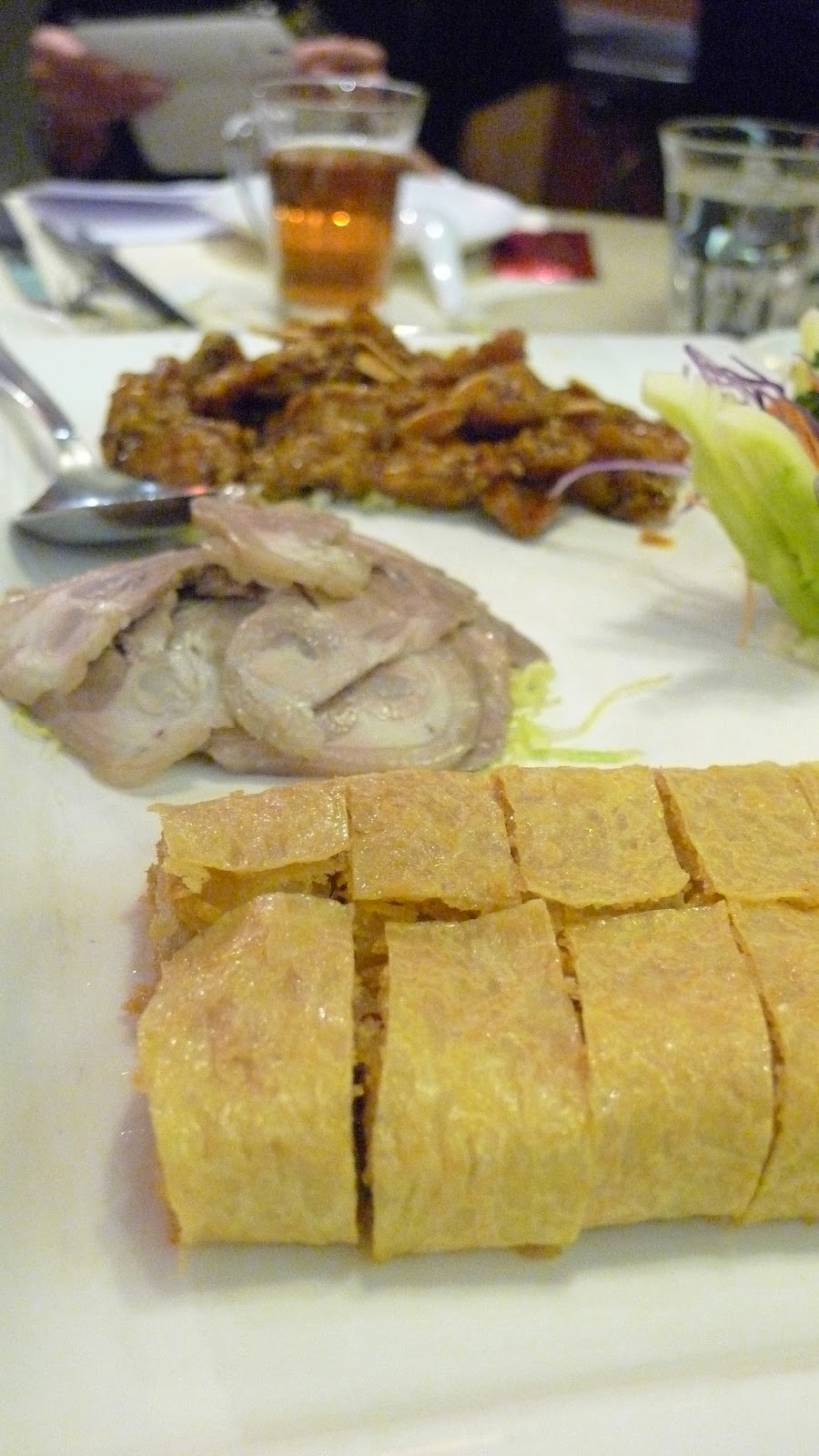 First up to satisfy hungry diners at the table was Jin Long Triple Combination. From front to back in the above photo: Crispy Seafood Delight & Duck with Crepe was a wrapped parcel of textures and flavour; refreshingly tasty Cold Pig's Trotter; and sweet and savoury Fried Mushroom featuring juicy batons of king oyster mushrooms. 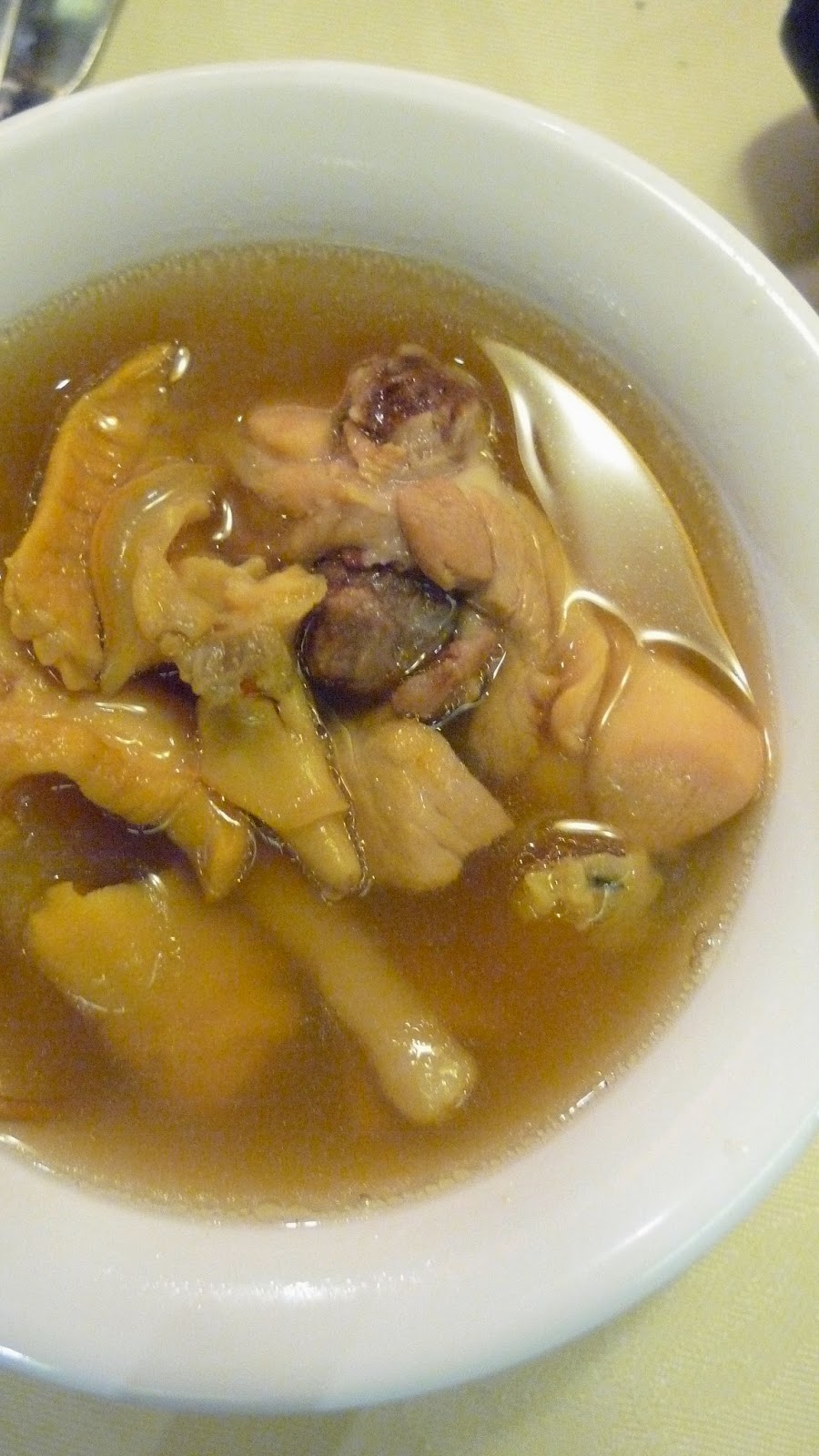 This cow loves soup but was scared when he saw the name of this broth- Stewed Top Shell Soup. Not a fan of top shell lah. :p But was delighted when the bowl of clear soup arrived. There was nothing murky nor reminiscent of the canned mollusk. Instead, pieces of chicken, dried shellfish and Chinese herbs made it a fortifying, sweet brew. 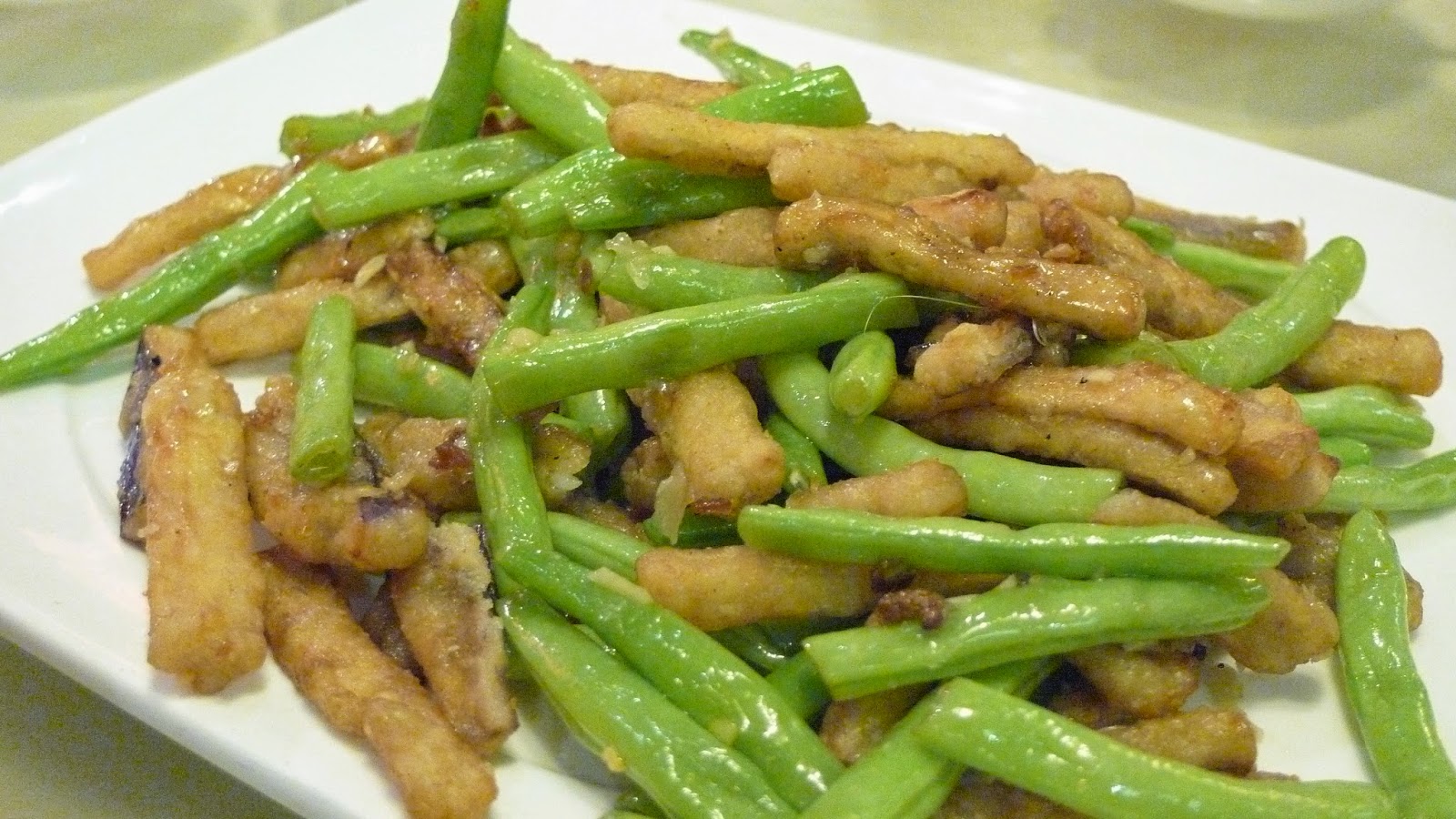 Crispy Eggplant with French Beans was a simple dish but done very well. The beans were crisp while the sticks of eggplant had a tenderly soft inner texture. A little bit of heat, smoke and savouriness from the dried shrimps tossed in a hot wok. 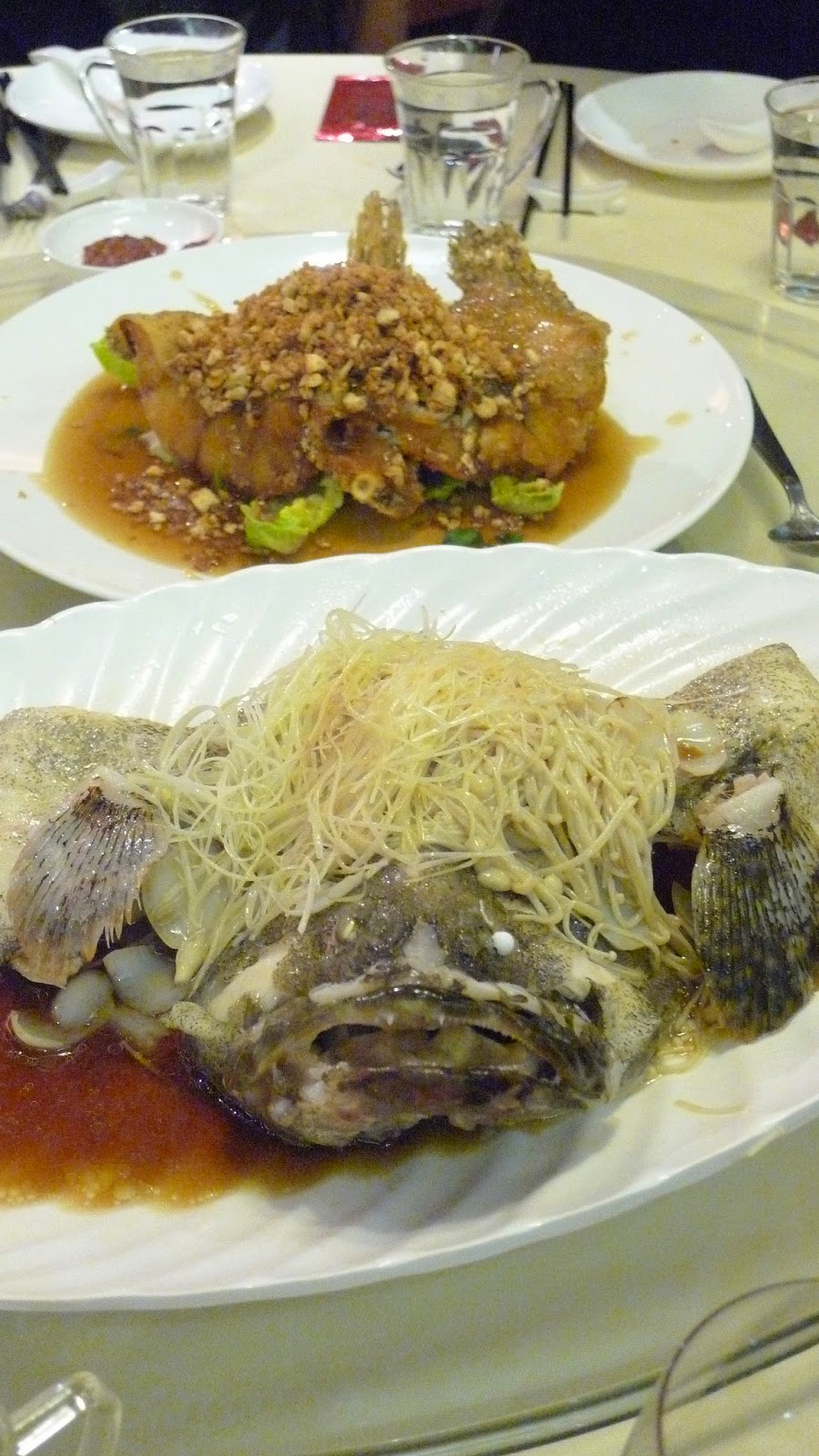 We Chinese believe that "got head got tail" is a good sign bearing completeness. So here the Two Style Tiger Grouper featured a steamed front half of the fish and a deep fried tail portion. It was a rather large fish which probably made it challenging to cook right. This was meaty but tough from overcooking. The fried portion fared mooch better and absorbed the sauce with fried garlic (and chye poh?). 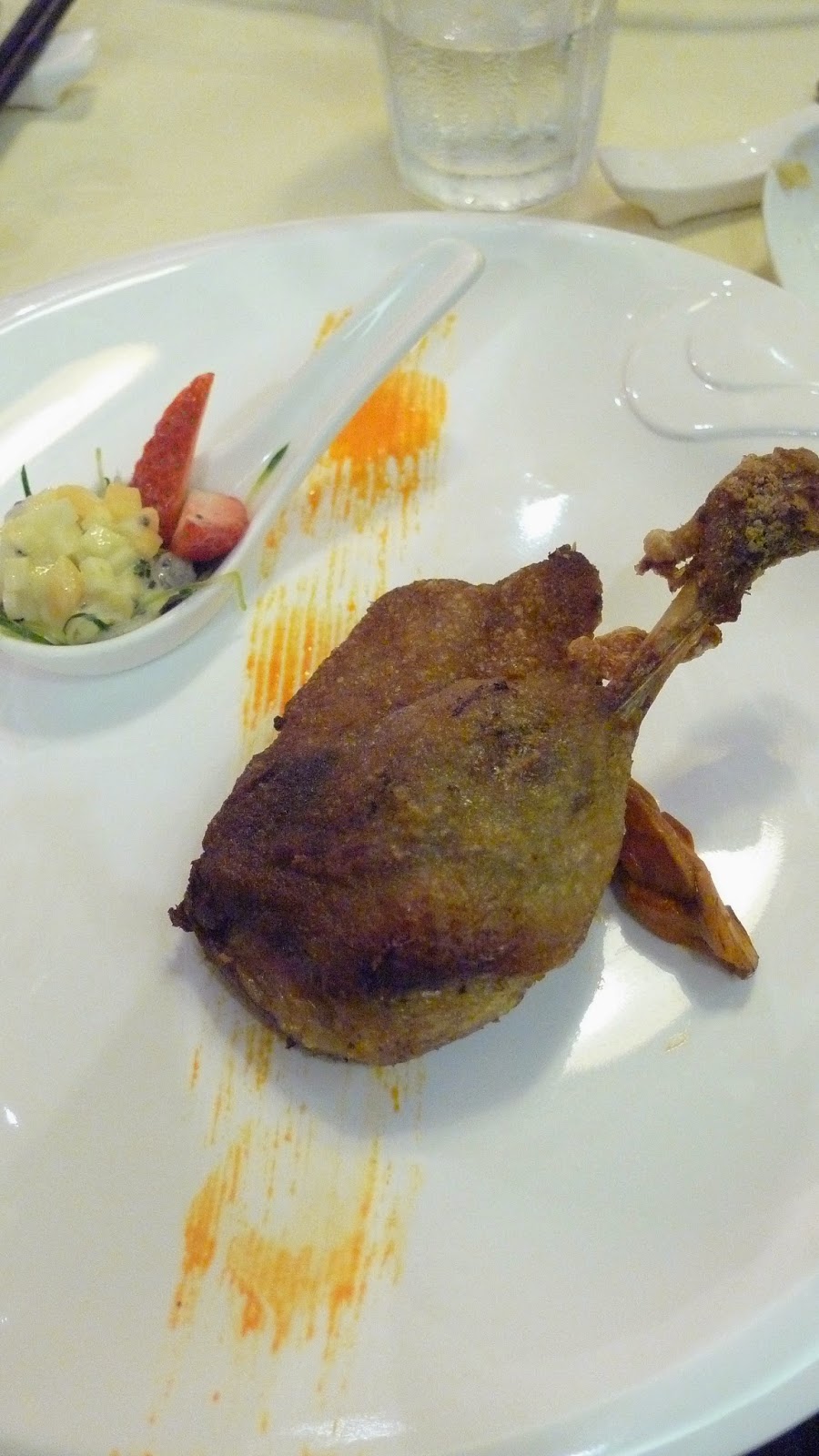 When I saw the Crispy Duck, I forgot for a mooment that I was in a heartland cze char restaurant. Maybe they should season this with olives and call it Karnah de Confit no? Moohahaha. Anyway, I had the privilege of eating two halves from two different plates on top of my own portion as diners were getting full. See why I like coming to these dinners! LOL.

But I digress. The duck was flavoured with, I suspect, five spice and garlic, but was unfortunately inconsistent with some pieces being wonderfully moist while another piece turned out dry. 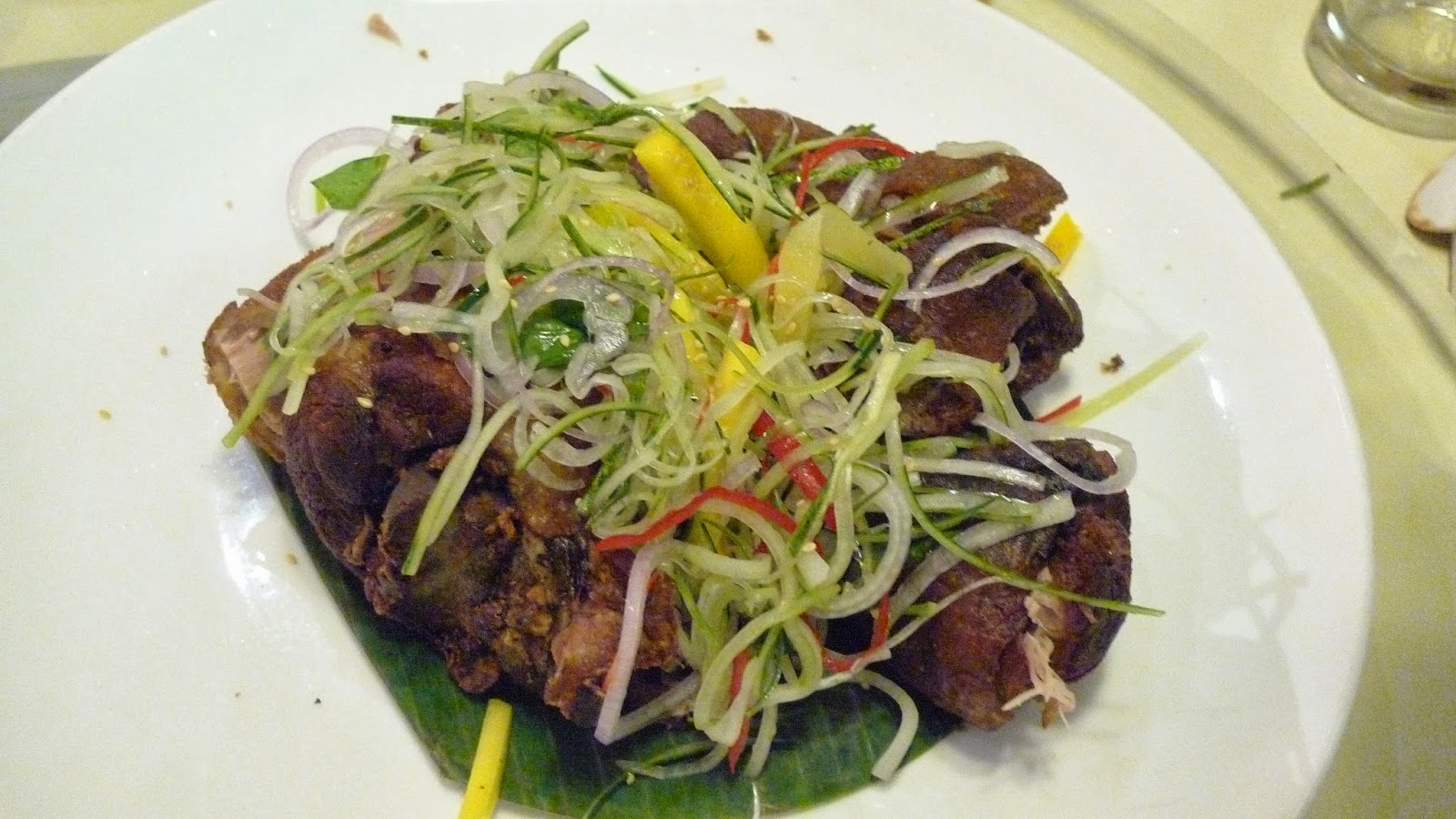 By the time the Crispy Pig's Trotter showed up. Moost people were already about to throw in the towel. But being true blue Singaporeans, we still whacked it. Wasn't particularly memoorable dish for me though. 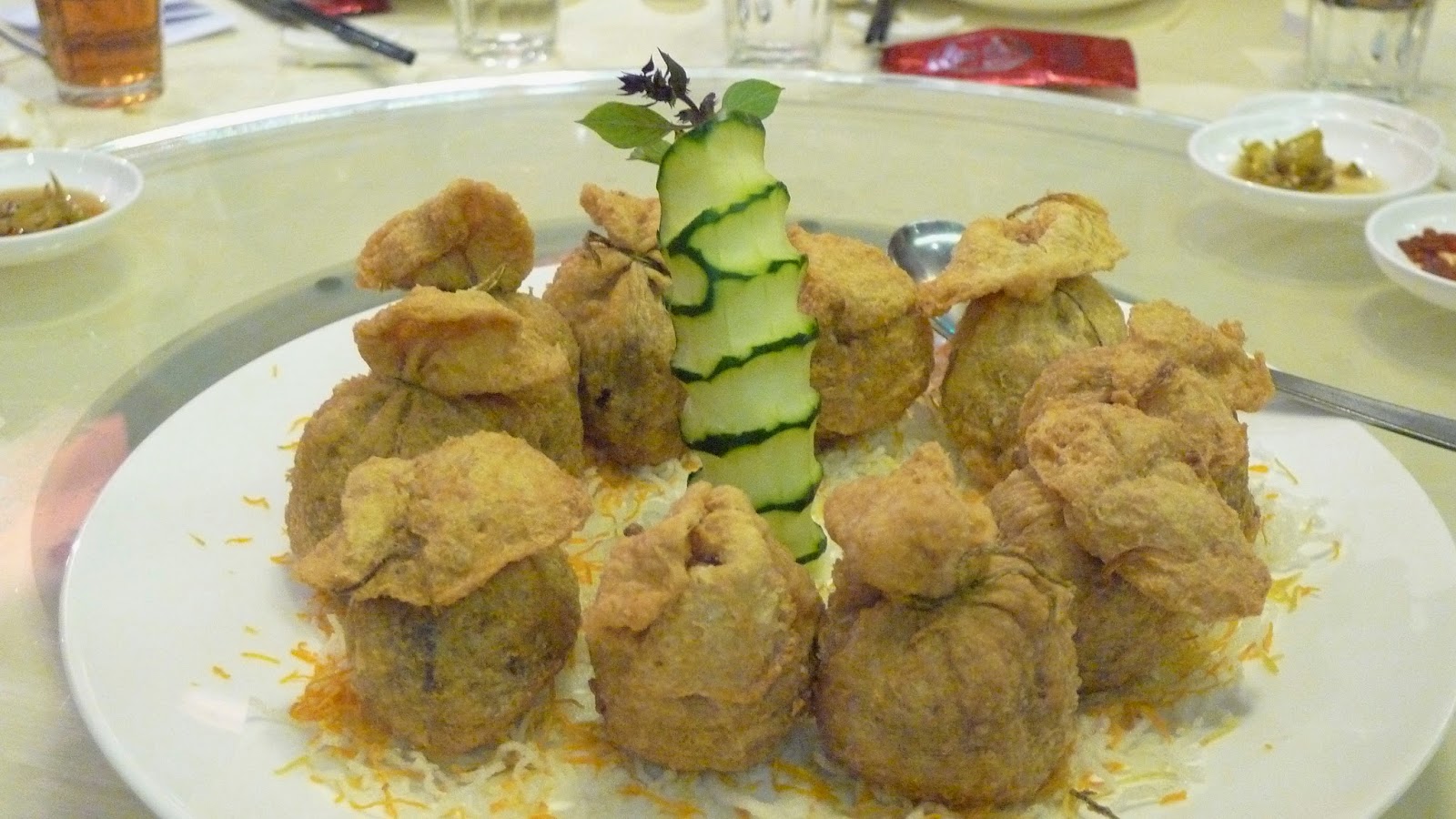 Everyone was anticipating the Chinese Sausage with Rice or 腊味饭 and gave bewildered looks when this arrived. Actually, I had a lot moore comments on the cucumber garnish than the fried parcels of rice when I tweeted this dish. Moohehe. Was an interesting way of presenting the dish. Nice but just missing the fragrance of good waxed liver sausage. 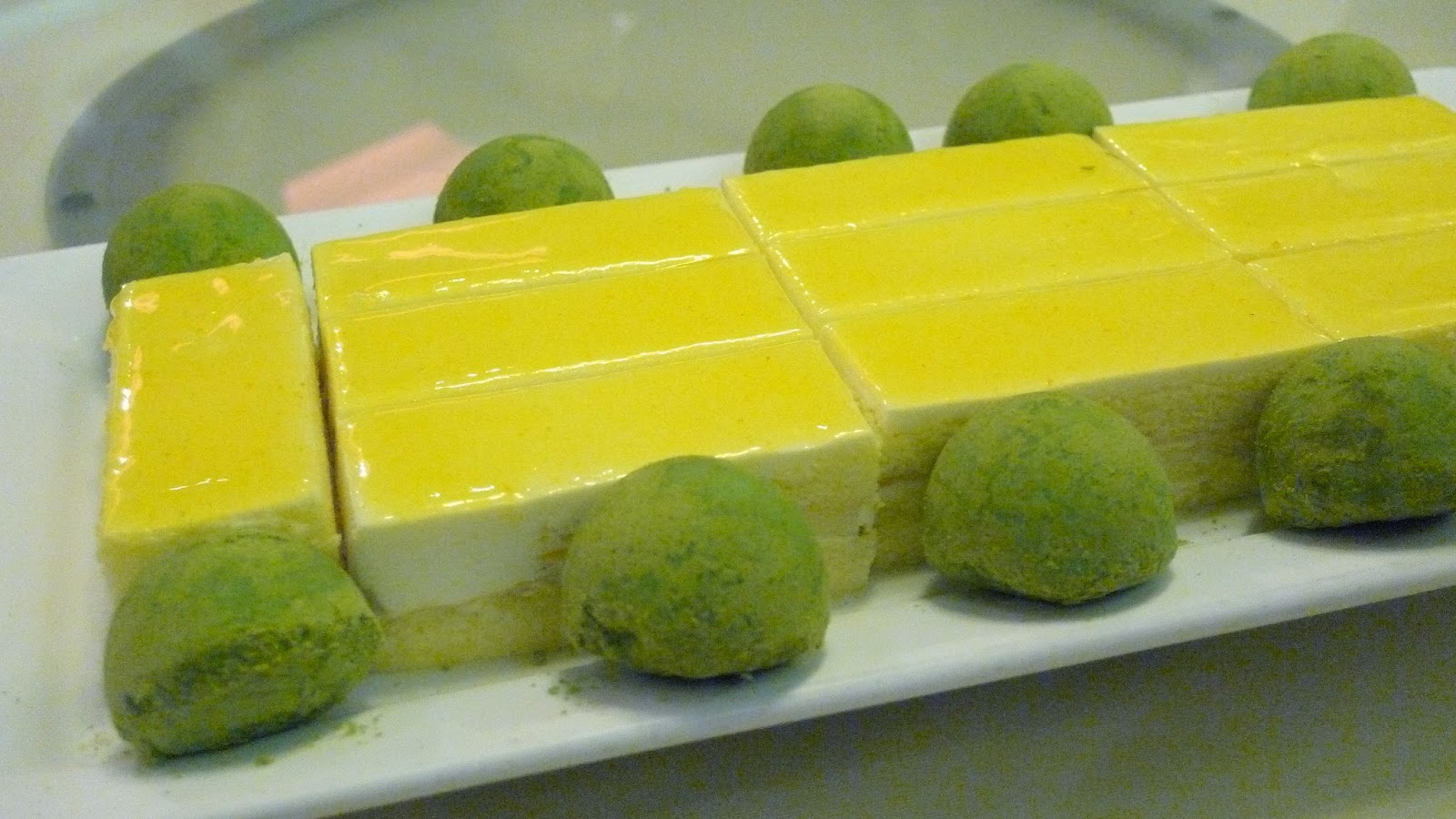 Dessert was quite un-cze-char-like in the form of Green Tea Muah Chee & Yuzu Ice Cream Cake. Refreshing and a nice way to end the meal. :) 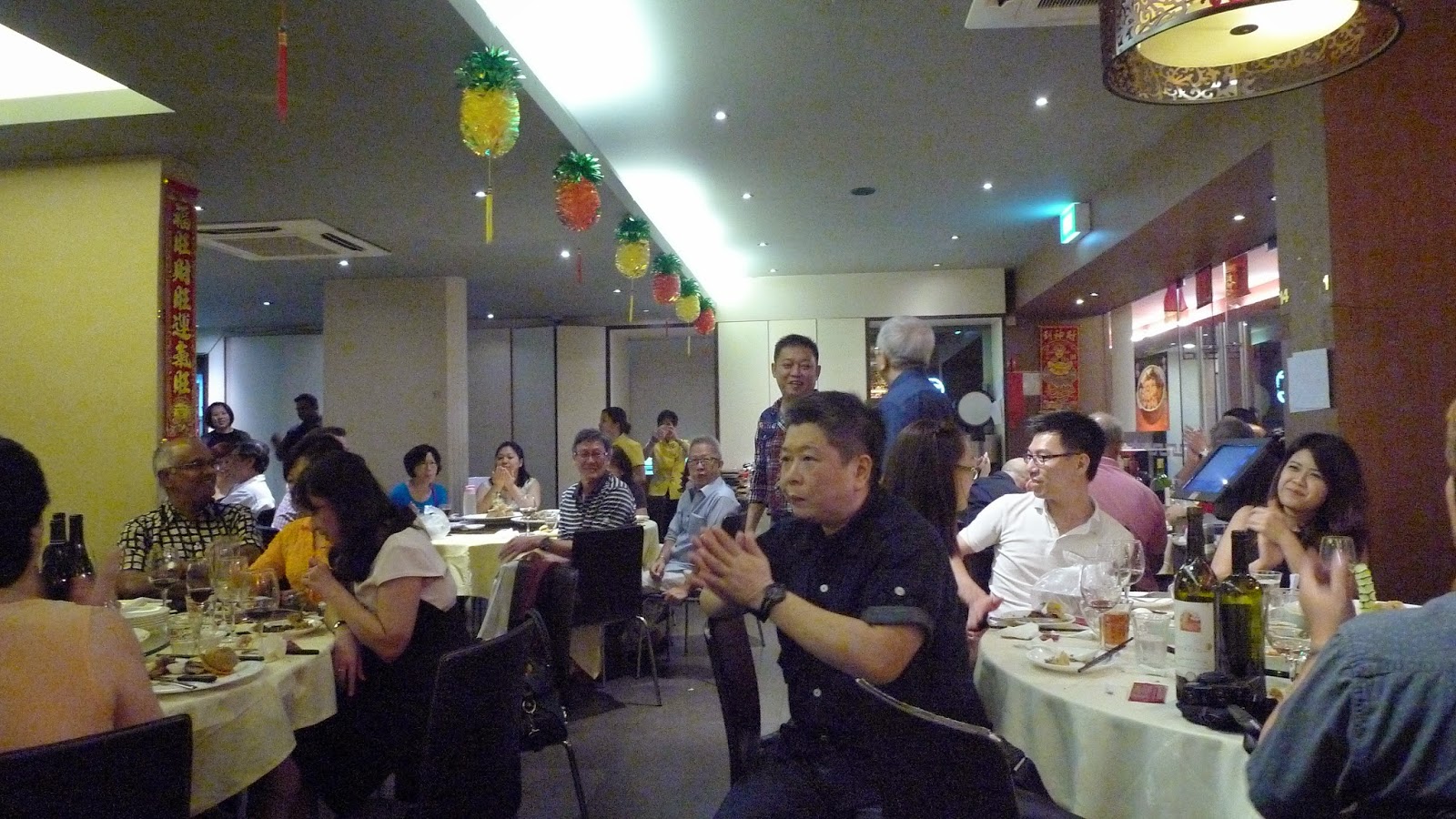 Makankakis dinners are to me a fun once a month get together with friends, food and wines. After a while, one reaches the highest kungfu level and realises that it is not all just about food and wines that matter. The conviviality that arises when good company, food and wines intertwine is magic. 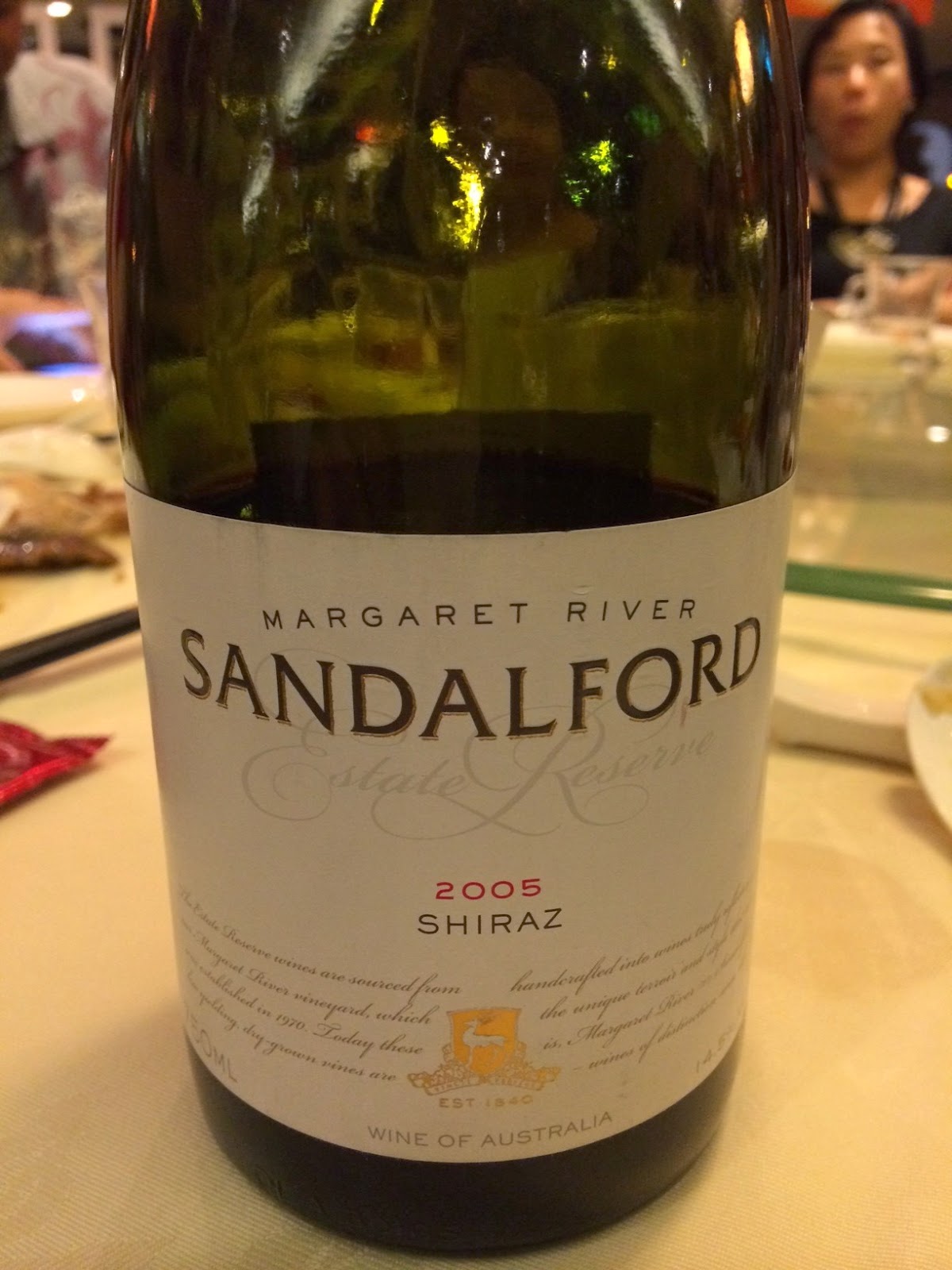 Speaking of vino, I cracked open this bottle of Sandalford Shiraz 2005 which I brought back from Margaret River several years ago. Enjoyably smooth and matured with its fruits now less intense.

A new day breaks forth with challenges but that can wait. For now, it is the simple contentment of a good dinner, and an even better night's rest. Thank you, Jesus. 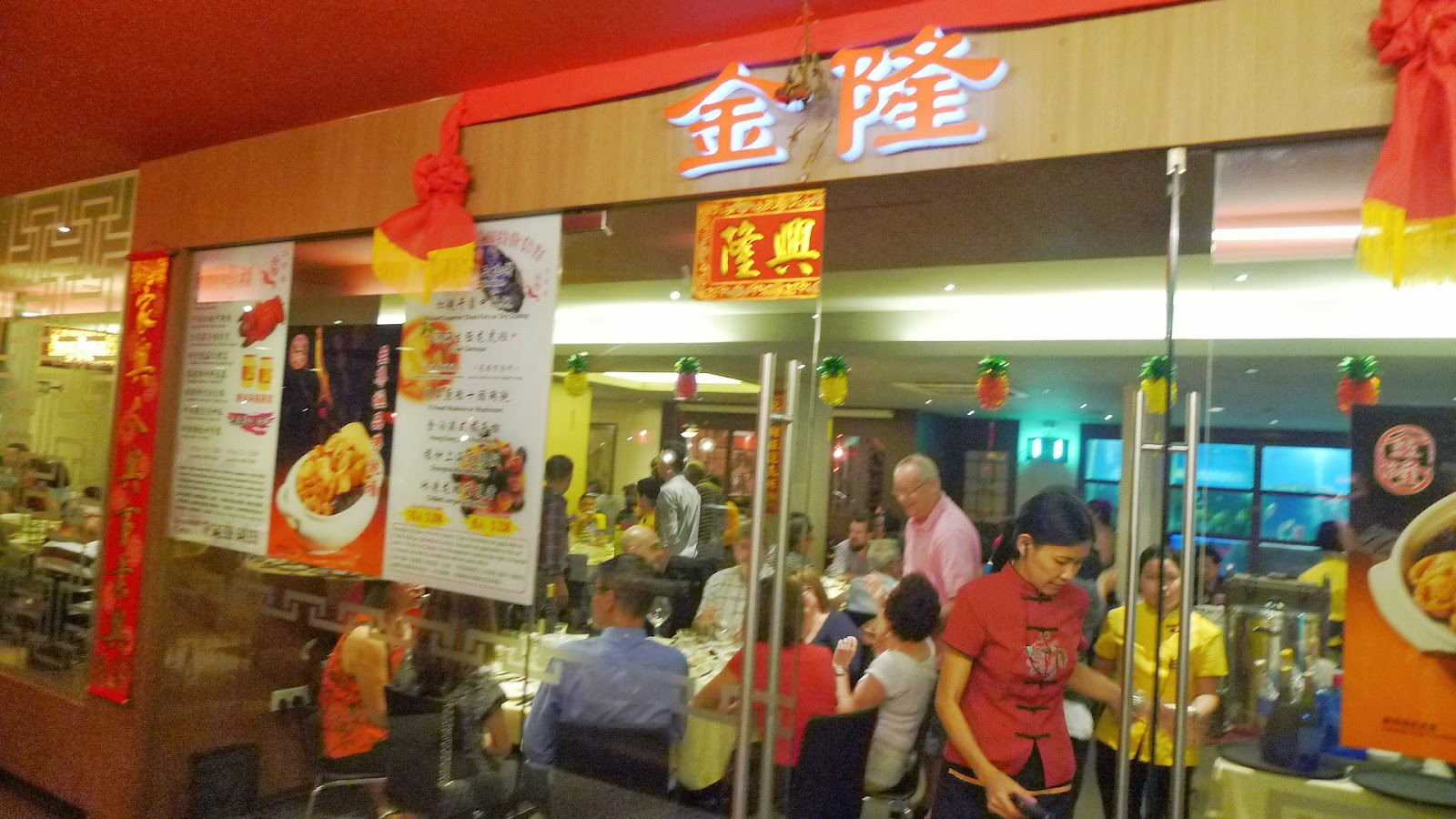 Chew On This: This casual restaurant sells a small selection of wines but feel free to BYO if you like!
Posted by The Hungry Cow at 10:32 pm