Having Bak Kut Teh for Two Days 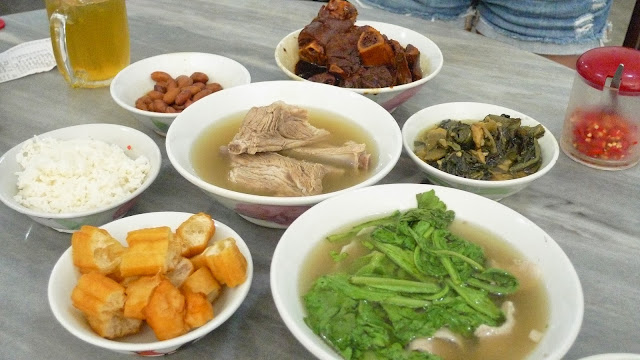 I was clearing leave so the delighted Miss Tam Chiak lured me over to an industrial estate for some bka kut teh. Though it was for a Channel U filming, she said "Just come and eat lah!"

Later on, I discovered we had to act in a music video too. Moohahaha. Yea, indeed no free lunch in this world. We had to work for bak kut teh. :p

But funny thing is (ok, or maybe not so funny when one have to travel from Loyang to Sin Ming) I remembered the date wrongly and ended up there a day before the actual shoot! Clear leave until brain also on leave. #KNS

Miss Tam Chiak was so nice to come join me for lunch on the day that I had mistakenly thought was the shoot date. So we had bak kut teh for lunch two days in a row!

Anyway, this branch of the famous Rong Cheng Bak Kut Teh is run by Lionel Lim, the second generation son of its founder. The Bak Kut Teh ($7) featured sizeable pork ribs that were tender yet retaining a good bite. The soup seemed to be better on the 2nd day I went down. More peppery and robust with clean flavours from the pork ribs, garlic and white pepper.

While the Pork Trotters didn't really impress, the Sliced Pork Belly was awesome! Thinly sliced US "natural" pork belly was cooked in the same Bak Kut Teh soup and topped with Tang O. This pork is from Salmon Creek Farms' pigs raised without hormones, antibiotics and animal proteins. Each sliver of pork belly was surprisingly not greasy and packed a lovely rounded flavour. I would return for this. :)

Now I'm half scared to see the episode when it airs in January 2014. I'm so not TV material lah. Moohehe. T'was fun at least!

Chew On This: Have some Chinese tea alongside your Bak Kut Teh! Try their custom made Tie Guan Yin for a satisfying brew. Each sip was fragrant, light and yet with just the right level of tannin to cleanse the palate.
Posted by The Hungry Cow at 10:27 am

I went a year ago and was not impressed as the pork ribs were just too tough.I like the soup though as it was teochew style (peppery)

FoodieFC: Thanks for sharing your experience there. Thankfully the pork ribs were quite tender during my visit. I like that they had a bite to them but overall I think the Sliced Pork Belly still won me over moore.