Nothing like something warm and comforting on a rainy Sunday afternoon. After ushering duties in church, I headed to the near by Gim Moh market for lunch.

I had intended to order up a plate of Chye Tao Kway only to return disappointed when it was all sold out after walking around deciding what else to eat. :(

So I settled for Kway Chap in the end. Still warm and comforting nonetheless!

After lunch, I was about to exit the hawker centre when I saw there were only 2 persons queuing at a popular hor fun stall. Perhaps it was after the peak lunch crowd. It is usually not uncommon to see a queue of more than 10 people in line.

Moorale of the story #2: Mai tu liao! Even if one had already had lunch. Moohaha. 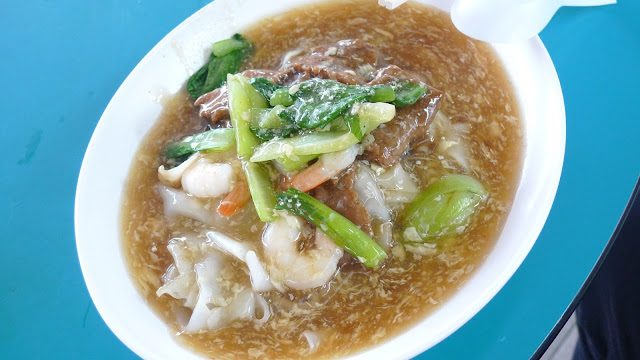 Turns out, I was the stall's last customer before they closed for their afternoon break. The Beef & Prawns Hor Fun ($5) featured strips of chewy kway teow that spotted a very light colour. Rather than simply using dark soy sauce for colour with minimal love in the wok as per many slipshod CMI cze char places, this stall added just a touch of light soy sauce and ensured the kway teow was expertly tossed around in a smoking hot wok.

The wok hei was beautiful. It's almoost like a bit of the wok's life goes into every batch of hor fun it encounters.

The beef slices were tenderised but thankfully not until the point of losing most of its flavour. I'm guessing these were marinated in oyster sauce and garlic. Pretty tasty.

Now to return for that Chye Tao Kway! 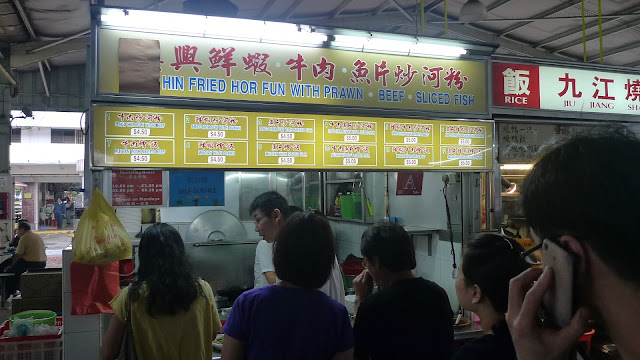 Chew On This: Did the stall just change its name? Used to be "Teck Hin".
Posted by The Hungry Cow at 11:53 pm