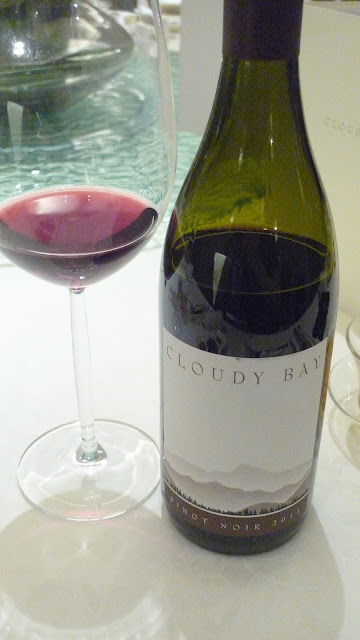 With the increasing number of running events each year, here's one for the foodies. And no, you don't need to actually run. Moohehe.

Cloudy Bay is known for its Sauvignon Blanc and a number of years ago it was probably the winery that made the Marlborough region of New Zealand famous. Cloudy Bay also produces a Pinot Noir and from now until 20 September 2013, diners can embark on the inaugural Cloudy Bay Pinot & Duck Trail in Singapore. 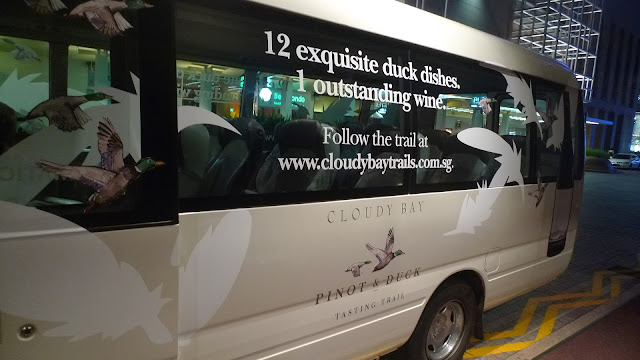 This cow had a feel of the trail by checking out 3 participating restaurants in one evening of duck and Pinot Noir...in a "duck moobile" no less. :p 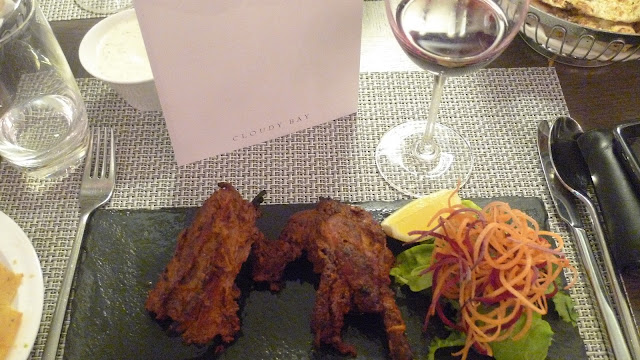 First stop was at Punjab Grill at Marina Bay Sands where Chef Javed Ahmad presented his Tandoori Duck with Wild Garlic and Sesame Seed Naan ($35++ for the dish and a glass of Cloudy Bay Pinot Noir 2011). It was my first time tasting tandoori duck. The duck had good bite, was flavourful and boasted a blend of spices with cloves being at the forefront. Alongside it was a scrumptious sesame seed naan. When this duck dish was enjoyed with the Cloudy Bay Pinot Noir 2011, the relatively high alcohol (almoost 15%) of the wine elevated the spiciness of the dish. Personally, the spices in the dish were a tad too intense for the wine.

Next we were whisked off to Golden Peony at the Conrad Centennial Singapore. Here, we were expecting one dish but it turned out to be a few from Chef Ku Keung. My four stomachs certainly won't complain. Moohehe. 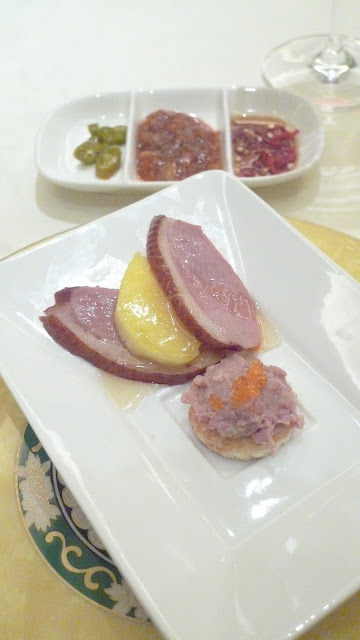 The Spiced Duck on Sliced Baguette, Sliced Smoked Duck with Fresh Mango was beautiful with the Cloudy Bay Pinot Noir 2011. Salty, smoky accents from the smoked duck and tangy sweetness of the mango danced with the tannins and fresh acidity of the wine.

Next to arrive was the Golden Peony Trio of Crispy Spiced Duck
- with pan fried foie gras
- with homemade crepe and condiments
- with passion fruit sauce, served in lettuce cup 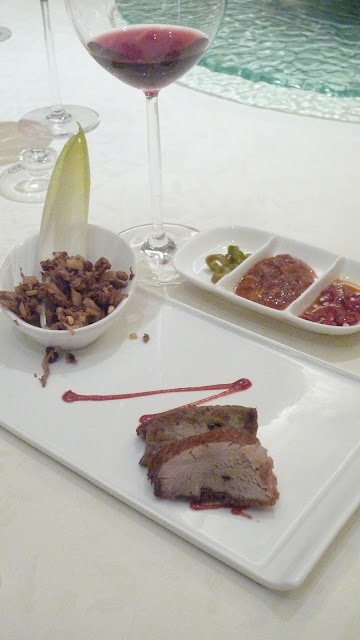 The Pan Fried Foie Gras was unfortunately quite dry but lent enough of its richness to the meaty duck slices for an added dimension. 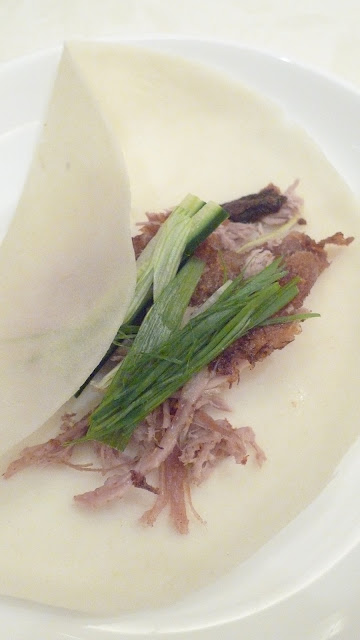 The Crispy Spiced Duck with Homemade Crepe and Condiments was pretty enjoyable with the Cloudy Bay Pinot Noir 2011. The sweet, savouriness of the bean paste sauce and the earthy flavours of the duck seemed to have brought out the savoury, juicy edge of the wine. 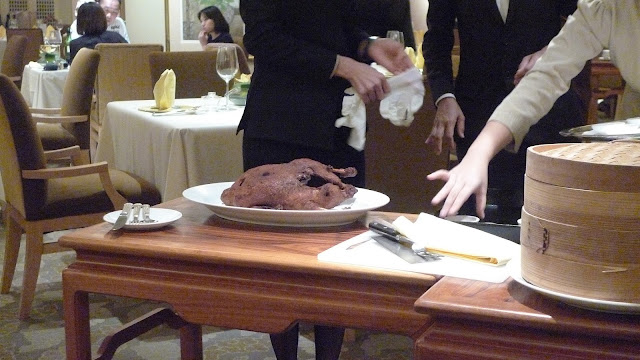 Overall, I do like the five spice used in the duck with the Pinot Noir. :) There is a 5-course set menu, including the above mentioned dishes, with a glass of Cloudy Bay Pinot Noir 2011 at $108++.

Our final stop took us to Stellar which... 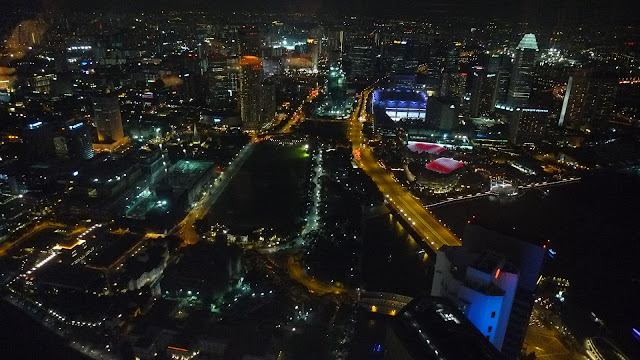 Has a stellar view of Singapore from the top! 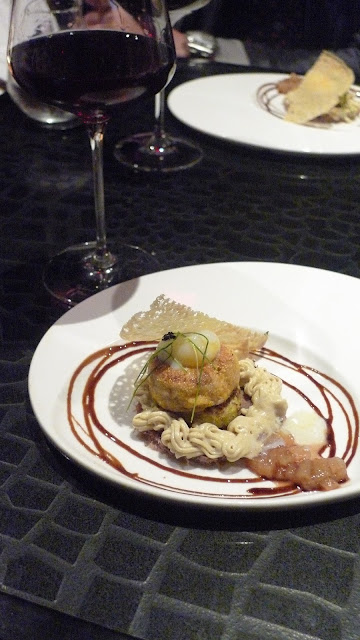 The duck dish here was Chef Chris Millar's signature Duck and Its Nest ($38++ for the dish paired with a glass of Cloudy Bay Pinot Noir 2011), with semolina-crusted foie gras, duck rillettes, foie gras parfait, corn pancake and quince compote. The earthy, meaty flavours of the duck rillette matched the cherry and thyme notes in the wine though the foie gras parfait was quite overwhelmingly punchy. 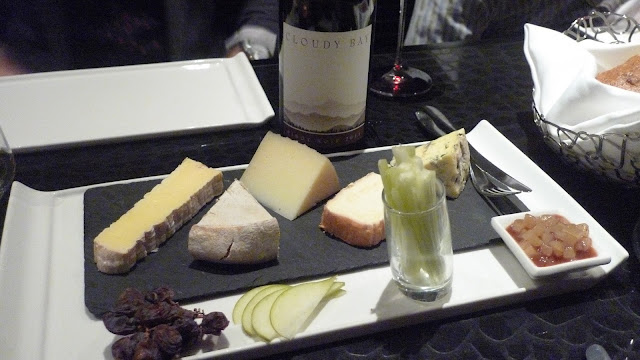 And for dessert, some of us had this yummy cheese platter featuring a selection of 5 assorted cheeses. It is not part of the duck trail but it was a nice way to end the evening...over another glass of Cloudy Bay Pinot Noir 2011 of course and moore conversations. ;)

Thanks to Albert Pang of Mercury PR and to Cloudy Bay for hosting me.

Chew On This: From now until 20 September 2013, every order of a duck dish on the Cloudy Bay Pinot & Duck Tasting Trail or a bottle of Cloudy Bay Pinot Noir purchased at Cold Storage will entitle you to one feather. Collect these feathers for a chance to win prizes such as exclusive invites to the Official Cloudy Bay Sauvignon Blanc 2013 Vintage Launch. Moore details here.
Posted by The Hungry Cow at 9:20 pm