Sous vide is a common method of cooking in many restaurants serving European cuisine. Meaning "under vacuum" in French, sous vide is essentially cooking food in a sealed, vacuumed environment (often food-safe plastic bags) placed in a water bath with low cooking temperature.

Food cooked this way takes a longer time (think h-o-u-r-s) but the results are consistent, and meats/fish better retain their juices and moisture. For a chef, it also means food storage and preparation can be better managed.

I first learnt moore about sous vide cooking from my first account I handled for work- the now defunct Table 66. Chef Vincent Teng is a sous vide enthusiast and widely uses it for a large portion of his menu. From eggs to duck legs, watermelon to momotaro tomatoes- one man to sous vide them all. Moohahaha.

So when I heard that my friend Ewan bought a sous vide temperature control unit online and was experimenting with this method of cooking, I kinda guessed that he would sooner or later hold a dinner to share his new-found obsession.

True enough a date was fixed and the guinea pigs rounded up- all 6 of us. At the back of our minds loomed the memoory of a $70 pork sukiyaki experience at the same place by the same guy many years ago... 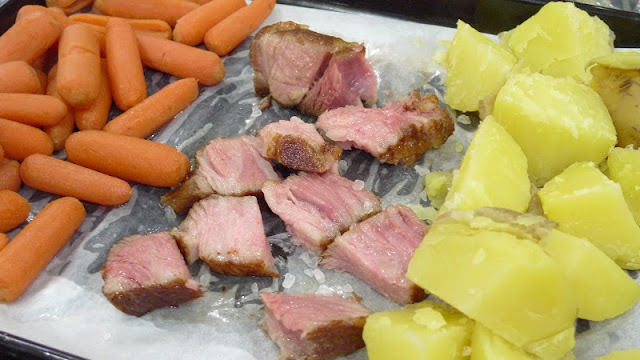 Here's the USA Iberico pork flanked by baby carrots and boiled potatoes. The pork, sous vide at about 58°C for more than 4 hours before being seared, was beautiful- luscious meaty texture with a nice fat marbling, juicy, sweet. Very rich tasting. 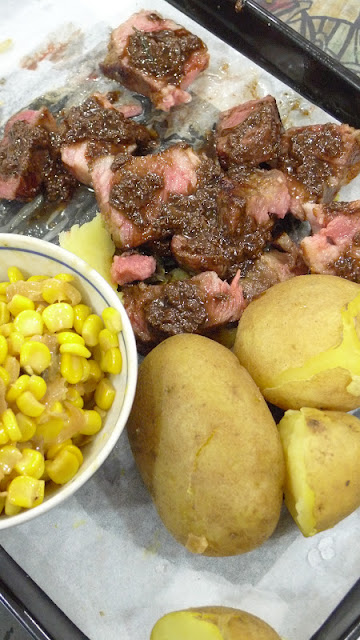 We also had a balsamic sauce though I much preferred the au naturel or a dab of mustard. The bowl of miso corn was delish but I think with the richness of the pork, people at the table were kinda scared at more butter being used. LOL.

Ewan also made sous vide eggs benny over toasted baguette and Serrano ham (more pork!). As much as I really remembered taking a photo, I can't argue with the camera. :( 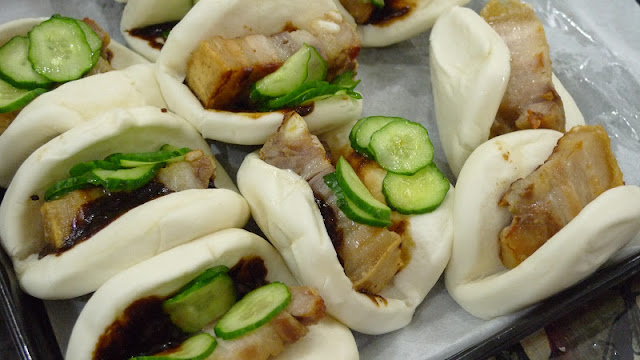 But I got a shot of the Momofuku-inspired kong bak pau! The pork (again!) belly was sous vide and served with Hoisin-tasting bean sauce and Japanese cucumbers. 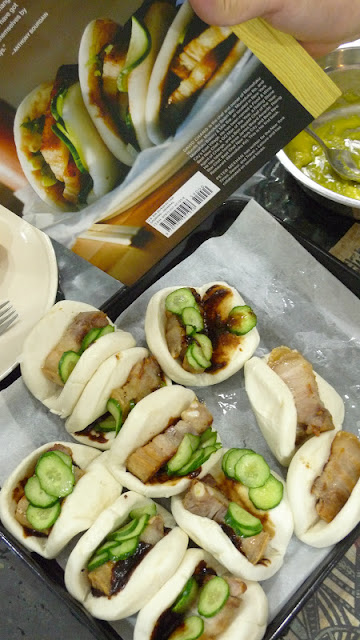 See the resemblance to the ones on David Chang's book? Moohehe. 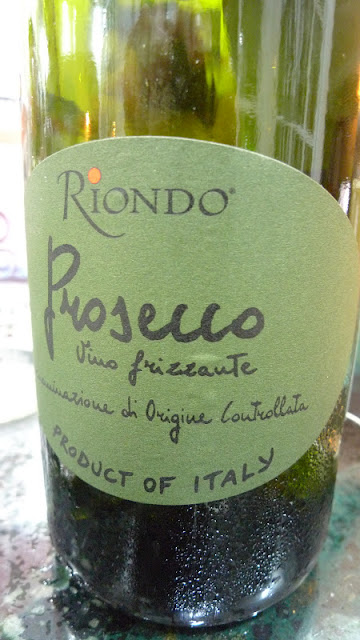 A Prosecco and a Brazilian Pinot Noir for the evening. 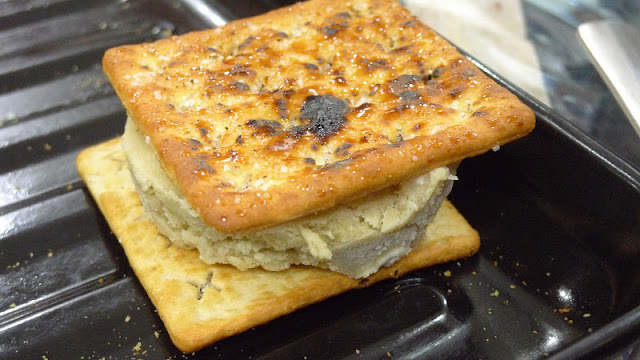 Dessert came in the form of a homemade avocado, coconut and gula melaka ice ream sandwiched between cream crackers.

That was one rich meal! Thankfully it was a Friday so the cow-lories can go some way in replenishing what's lost in the crazy week. TGIF indeed and thanks to our host for the (sous vide) dinner!

Chew On This: Cos it's a lot economical and sometimes more fun to eat in. :)
Posted by The Hungry Cow at 12:40 pm

adel: I will go tell the "chef"! Moohehe. Thanks for popping by and for dropping moo a note. Keep blogging! :)

That is what I love about European cuisine! Anyways, a friend told me that I should try eating at restaurants that do offer Asian cuisine. Any idea where?

The pork recipe looks like it was seared and cooked to perfection! This is what I want to achieve while cooking a recipe like this one; especially the beautiful-luscious meaty texture.

That looks so delicious! I hope you could come to a Persian restaurant too, because I want to read your review about it. Thanks for sharing!

Those foods are so tempting! I just wish they finish renovating my kitchen soon so that I can already try and cook new recipes like this one.