Blame it on The Noose (an awesome TV show!) that now each time I hear "Si Chuan", Lulu comes to mind. Moohahaha.

As per monthly tradition, the makankakis descended upon the month's chosen venue. This time it was Si Chuan Dou Hua @ PARKROYAL Hotel on Kitchener Road. 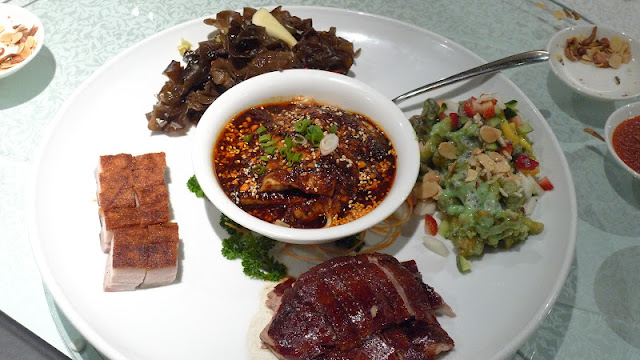 Dinner kicked off to a start with the Cold Appetiser Combination (Roasted Duck, Chilled Chicken with Spicy Bean Paste, Mushroom with Wasabi, Crispy Roast Pork, Preserved Fungus with Chilli Padi). Certainly a nice variety of food to whet the appetite. I particularly enjoyed the Chilled Chicken with Spicy Bean Paste (in the bowl) with its robust flavours of cumin, coriander seed, fennel and bean paste. While not searingly spicy, it's enough to make my mouth water even as I am typing this. :p 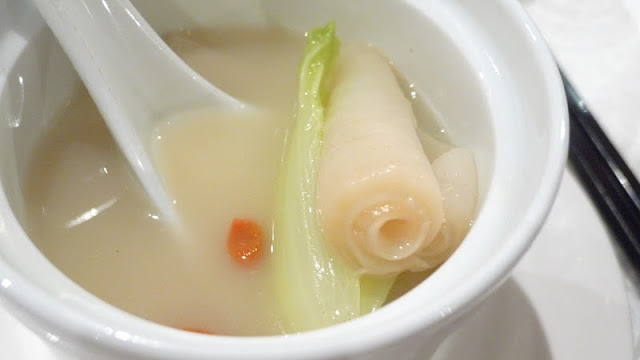 The next to arrive was the Double-boiled Shark Cartilage Soup. It was slightly milky but I found it a bit bland. 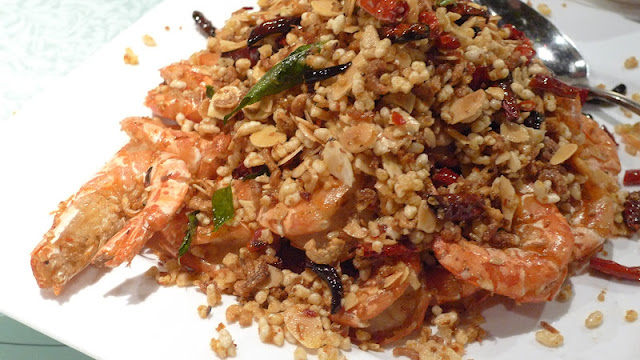 That's alright because the Stir-fried Prawns with XO Sauce, Garlic & Almond Flakes rocked. The savoury notes of the prawn shell and XO sauce mingled with the aromatics of garlic, dried chilli and roasted almond. This would make Cereal Prawns seem like a kiddo dish. Moohehe. 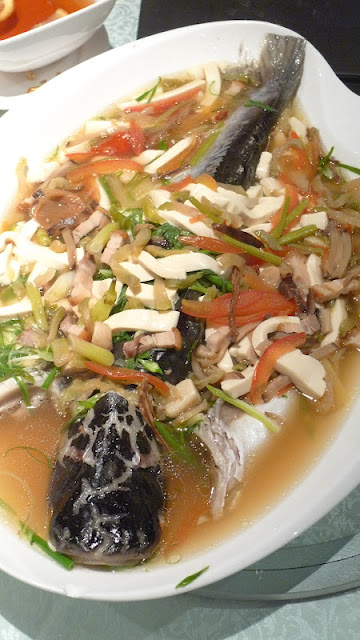 I also enjoyed the Steamed Pating Fish in Cantonese Shunde Style. The fatty freshwater fish was tender, cooked nicely and had a light tasty broth from the strips of tomatoes, tofu, black mushrooms, spring onions, pork belly and preserved vegetables.

Then the bomb arrived. 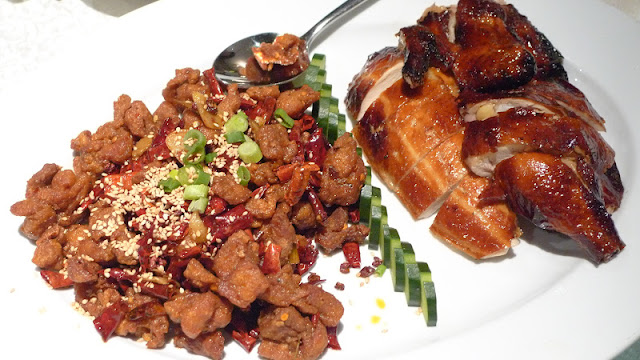 The Combination of Roasted Crispy Chicken & Chong Qing Diced Chicken with Dried Chilli were both chicken dishes but all that separated plain chicken and pain chicken was the wall of sliced cucumbers. LOL. The Chong Qing Diced Chicken with Dried Chilli was so spicy and numbing yet painfully delicious at the same time, it was cruel. Most of the people at the table took a bite and pushed the rest a side, scrambling for fire hydrants orders of iced water, black vinegar and sugar to soothe the damage.

This cow was breaking out in sweat but couldn't help himself. I had to go for a few moore pieces. Damn those intense, aromatic spices! 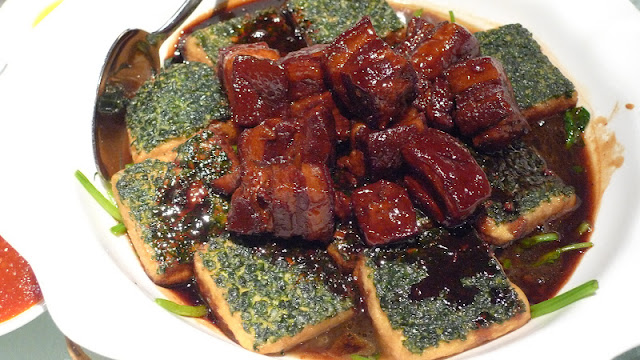 Braised Homemade Beancurd with Pork Belly was such a comfort after the chicken dish from hell. Its softness, oiliness and balance of sweetness and sharpness tapered the heat very well moo thought. 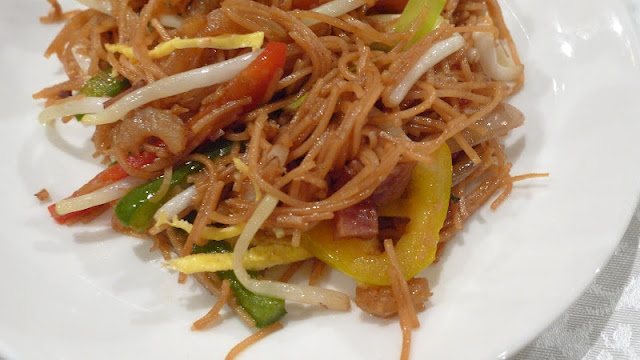 Stir-fried Mee Sua in Village Style. To be honest, I couldn't quite remember much about this dish. I think my taste buds were still reeling from the Chong Qing chicken. 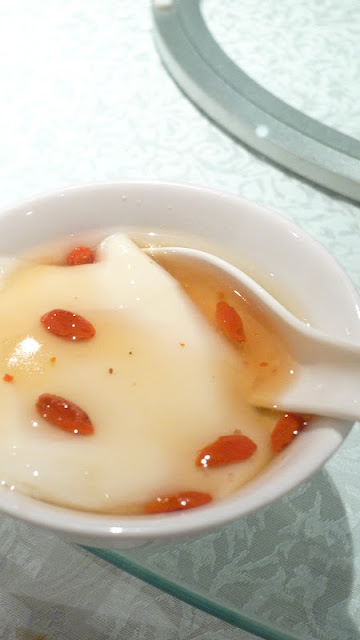 Homemade Beancurd with Wolfberries was a good way to end the meal. The brown syrup had a bit more depth and the beancurd was smooth with none of that Lao Ban pudding-like version. 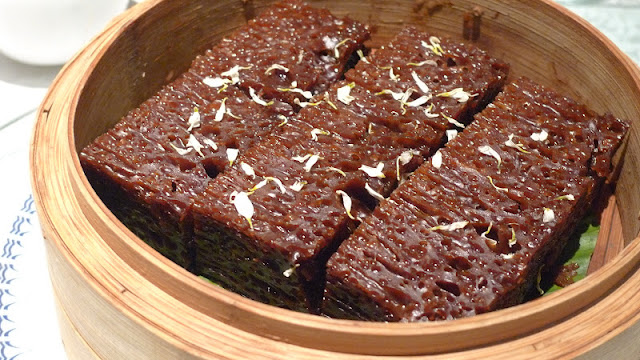 The other dessert of Honeycomb Cake with Chrysanthemum was also very good. Thick blocks of chewy kueh with a bit of an airy structure provided a satisfying bite. It was not too sweet too. :) 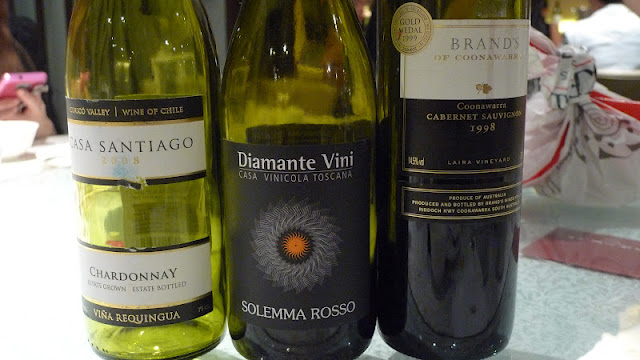 For such a dinner, it was kinda tricky to pair with wines. But being 酒鬼, we had to have some. Moohehe.

I think the fresh, fruity, slightly oaked Chilean Santiago Chardonnay 2008 ($25; order from thehungrycow) was a good match to the first few dishes. The Solemma Rosso 2009 ($42; order from thehungrycow), an IGT of about 85% Sangiovese and 15% Merlot, is a light to medium bodied red with fresh cherry and blackberries and a touch of spice. Its relatively soft tannins meant it didn't clash with the spicy flavours from the food. The other wine we had was an aged Brand's Coonawarra Cabernet Sauvignon 1998 that had rich black fruits with a bit of mint and earthiness. 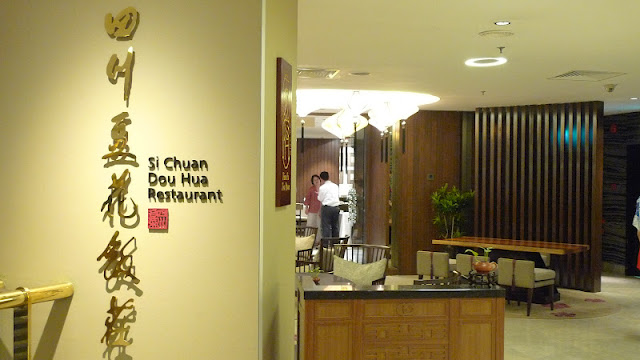 Chew On This: Dim sum fans, check out their Nostalgic Dim Sum Buffet Feast at $25++/pax that apparently has well-loved dishes from the bygone era. Now until 30 Sept.
Posted by The Hungry Cow at 12:46 am

omg, the steam fish is filled with so many ingredients!

OHH makankakis dinner is still being held? do u know where the dec one is going to be?! =)

yiLIng: Hello! Yes, it's still ongoing...10 years strong. :D I hear the ang mog style dinner will be in Nov this year instead of the usual Dec. Keep your eyes peeled on the Makansutra Forum or let me know if you wanna grab some seats.