One of the newest and most exciting food event concepts for this year is Savour. Occupying the entire F1 pit, this 3-day event features Michelin-starred chefs, well-known chefs in Singapore, cheese/coffee/wine/bread/cooking workshops etc. This cow trotted down on the Friday evening and again the next day afternoon. And here are my moo-meries.

Hungry, as usual, we decided to grab a quick bite and headed straight to the booth of perhaps the biggest name of the event- 3-Michelin-starred Alain Passard's L'Arpege. 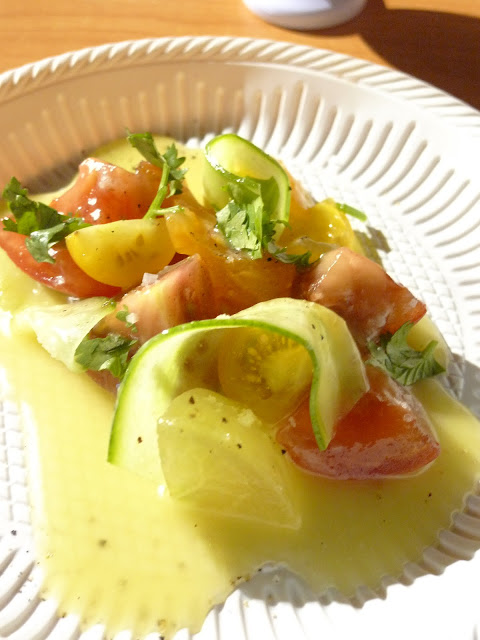 This is his Sweet and Sour Tomato with orange blossom. Tangy, sweet and really fresh-tasting heirloom tomatoes. The course sea salt really brought out the flavours of the tomatoes! 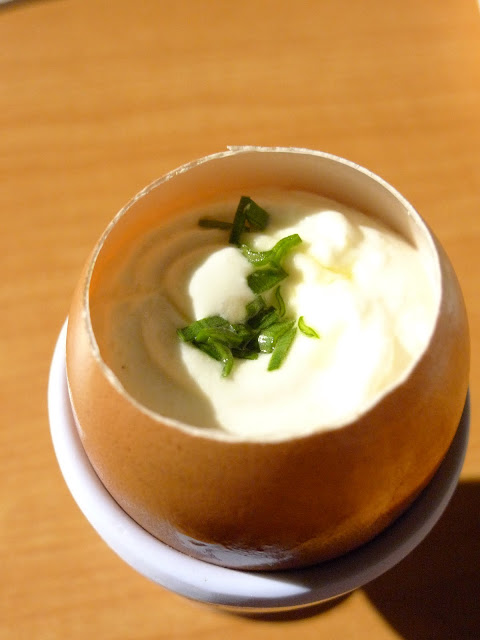 The Chaud Froid of Egg with maple syrup and xeres vinegar was deceptively simple. Initially, I thought it was underwhelming. But soon the hot and cold contrast and the savoury-sweet-tart flavours tingled amidst the creamy texture. 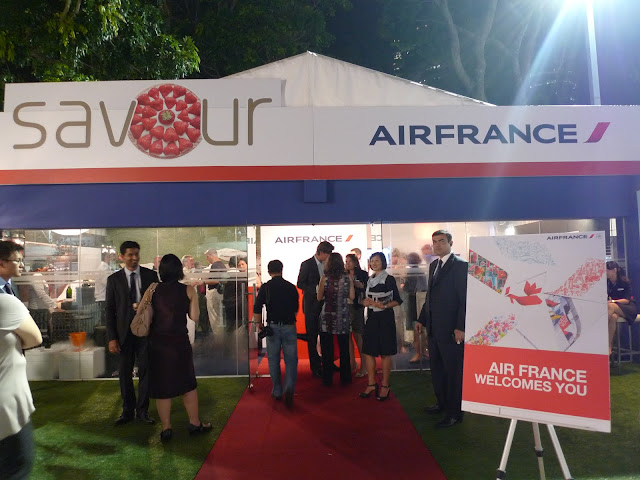 Then I turned up at Air France's pavilion. Air France was the official airline sponsor of Savour 2012 and they were celebrating the launch of their new A380 Singapore-Paris route. 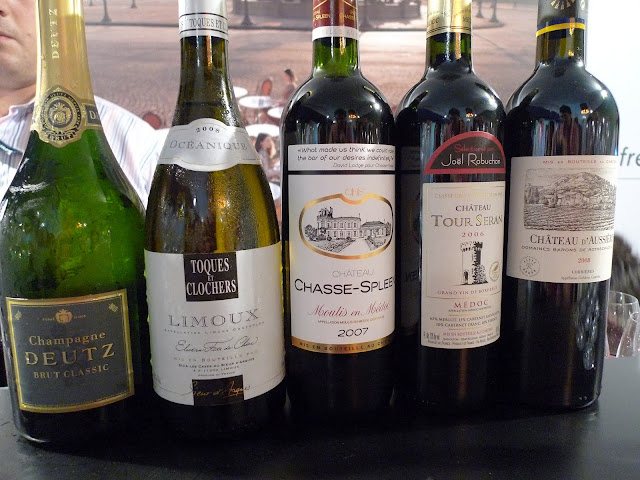 Available for tasting that evening were the wines served onboard Air France's Business Class. Pity I wasn't able to sample them fully due to time constraints. Oh by the way, I learnt that champagne is available across all seating sections onboard Air France. Even Economy Class passengers get to enjoy bubbly! Yay. 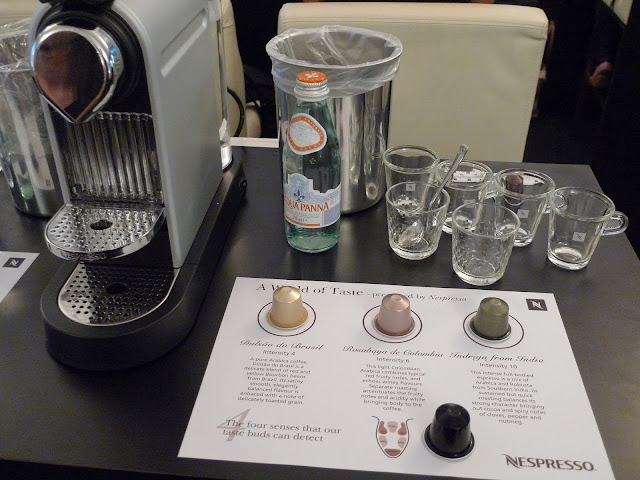 Next, I attended a Nespresso Coffee Atelier event. I think Nespresso has made coffee machines chic and sexy! The handy capsules also make it convenient and easy to operate. Just plonk one capsule into the slot, close the cover, press a button and ... 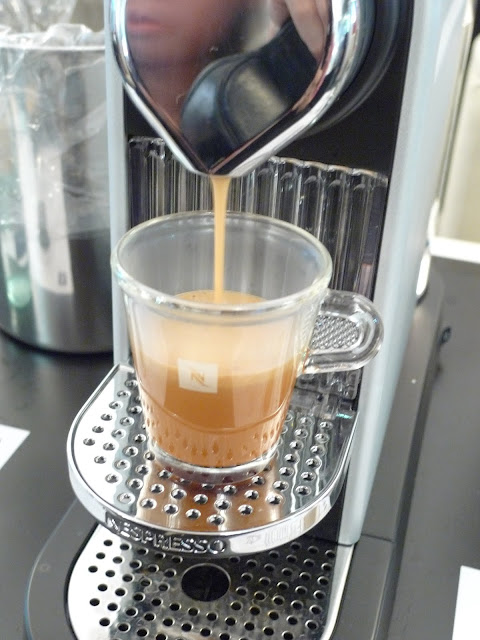 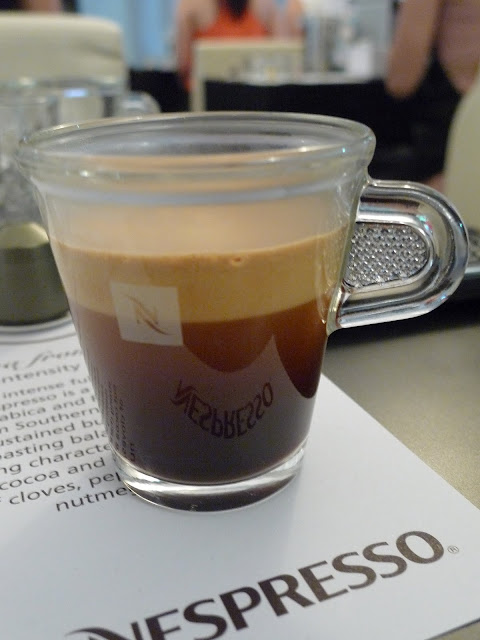 Check out the 3 layers. Apparently a good coffee has these 3 layers when freshly pulled. The top crema is also a sign of quality. 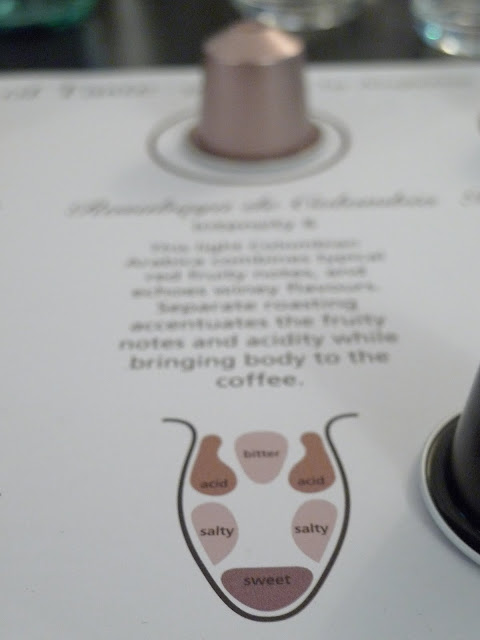 Akin to tasting wine, we were encouraged to slurp to introduce air and propel the coffee to the back palate. But moost be careful. Hot espresso! Different parts of the tongue are more receptive to different flavours. 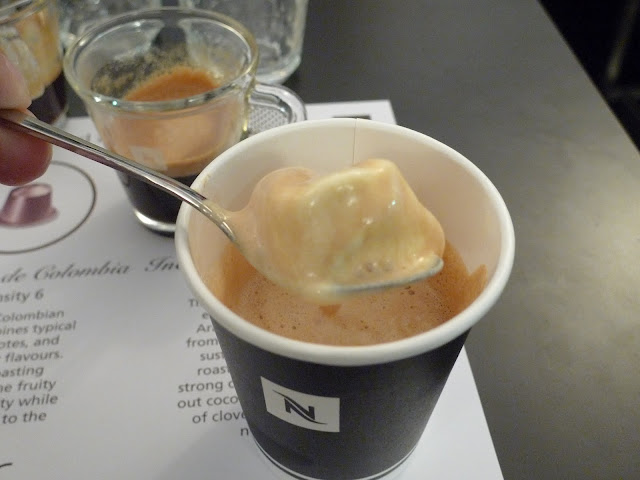 After tasting through 4 out of the 16 Grand Crus, we were give an additional capsule which has cherry coffee. This was combined with vanilla ice cream for a delicious affogato. Such a simple dessert! :) 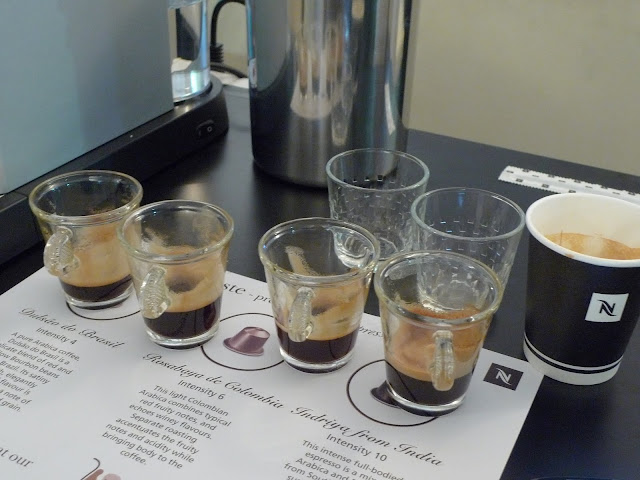 Tasting 5 espressos within 30 minutes at 8pm+ got me a bit worried. Moohehehe. But surprisingly I didn't struggle to get to sleep that night. Apparently with the smaller volumes of espressos, they contain less caffeine than a regular mug of coffee! 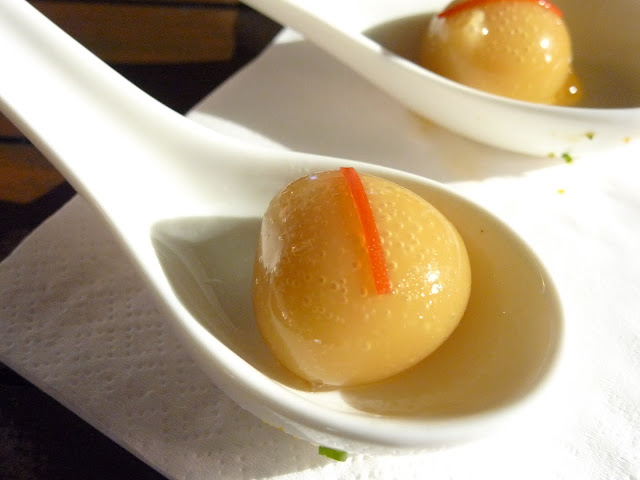 Ok, it's time for moo-re food! Next we checked out Bo Innovation's Alvin Leung's Molecular Xiao Long Bao. This looked nothing like a xlb. Had a texture of nothing like a xlb. But tasted exactly like a xlb! The gel skin encased a pork broth and biting into that strip of ginger completed the xlb taste profile. Intriguing to experience but I certainly would prefer a non-molecular xlb on a more regular basis. :p 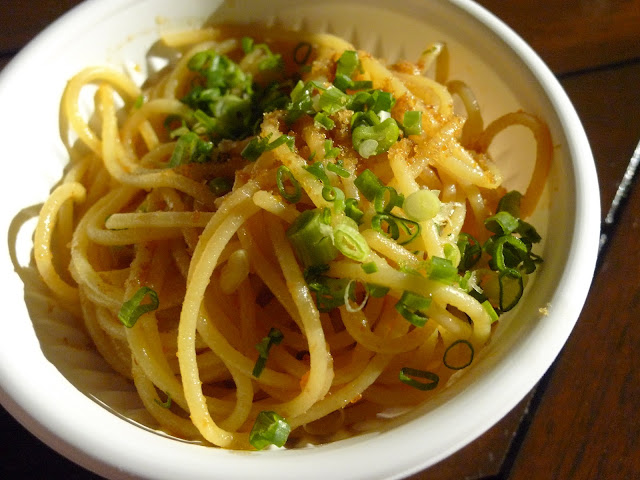 The Har Mei Lo Mein with har mei oil and powder was pretty tasty albeit a wee bit dry, and was packed with the umami-ness from the dried shrimp oil and powder. I could eat a BIG bowl of this! Moohaha. Hey, I haven't seen the words "Lo Mein" since Cornell days! 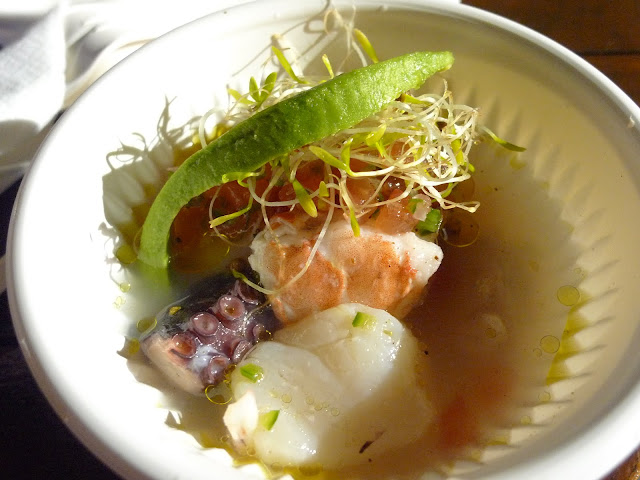 To end the night (before chomping down Popeye's fried chicken at the Singapore Flyer later), we tried Mexican Chef Enrique Olvera's Vuelve a la Vida shrimp, scallop and octopus, with chipotle and coriander emulsion. It was fresh, tangy burst of flavours. 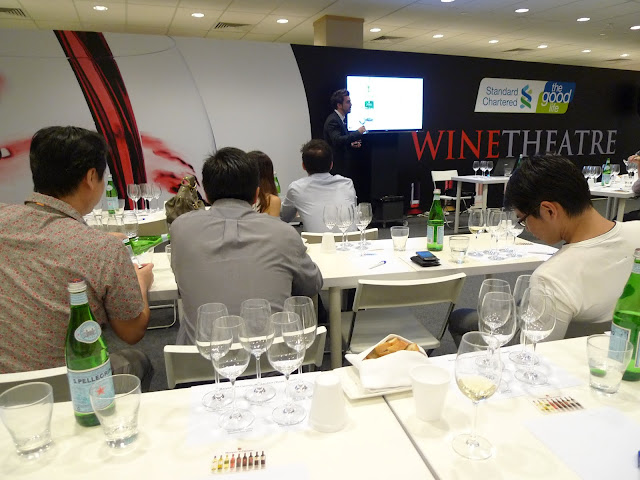 A quick stop at the Wine Theatre for a Spanish wine class. We both think the ang moh presenter could be a Hugo Boss model. LOL. Sorry moost be the wines. Moohahaha. 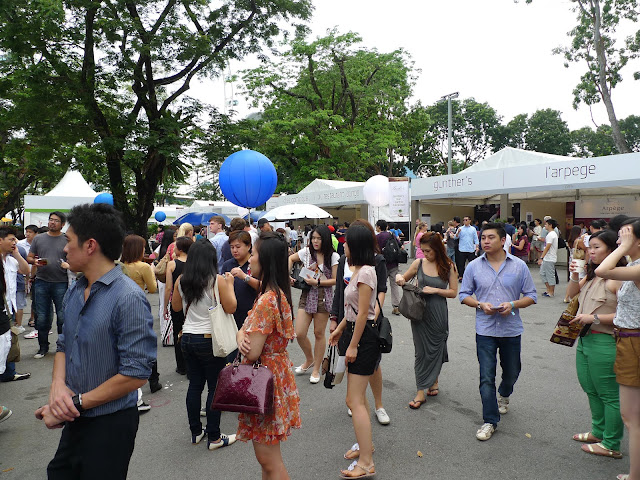 Day 2 was a different scene. Bright and sunny, it was better to see things and people. 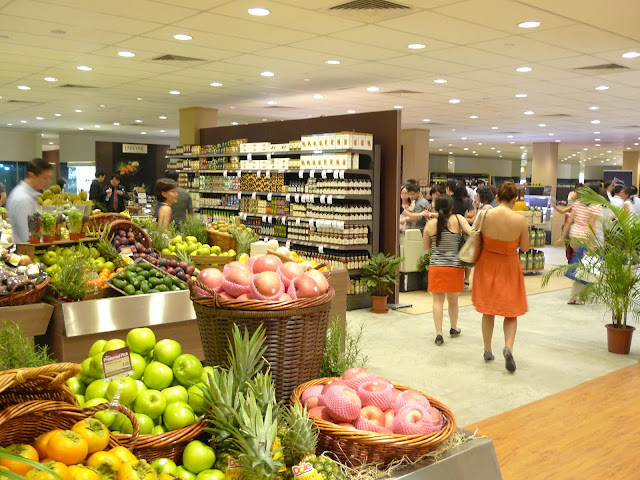 We visited the Gourmet Market in the cooling air-con comforts of the F1 building. 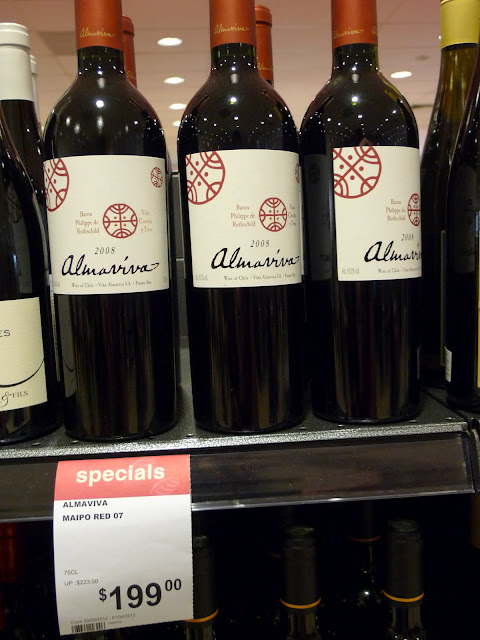 Fans of Almaviva can get the 2008 vintage here. 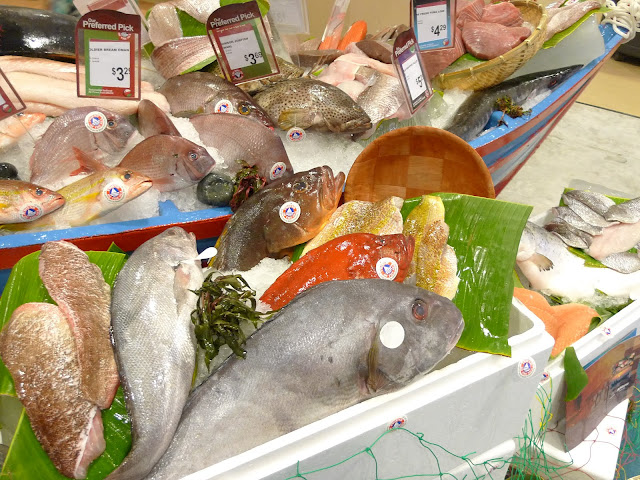 An attractive display of fishes. With a sashimi counter, people were buying sashimi and enjoying it with wines and other gourmet food. 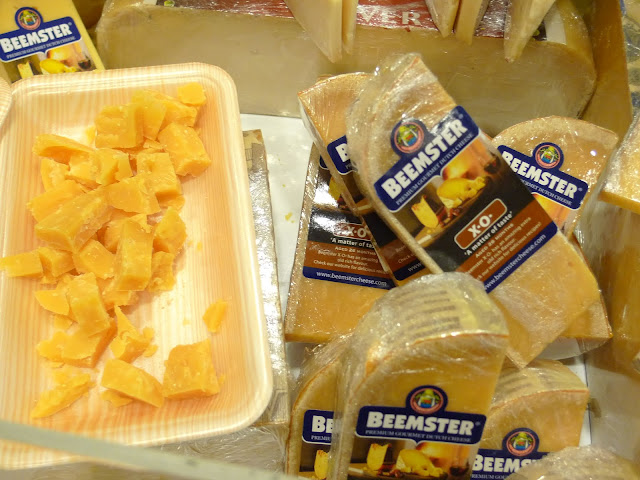 I was over the moon (hahahaha!) when I spotted Beemster's XO cheese. I first discovered them while working at a fair in Raffles Town Club. The 26 months matured XO cheese had a rich, nutty and complex flavour.

Ok, those squeamish about raw animal parts and baby oink oinks should skip the next pig-ture. 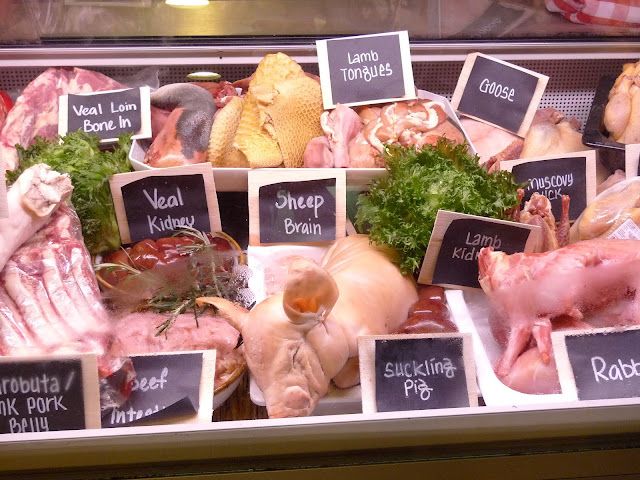 Green Grocer had a very interesting array of cuts. I have had beef tongue but not lamb tongue. Wonder how the latter tastes like... 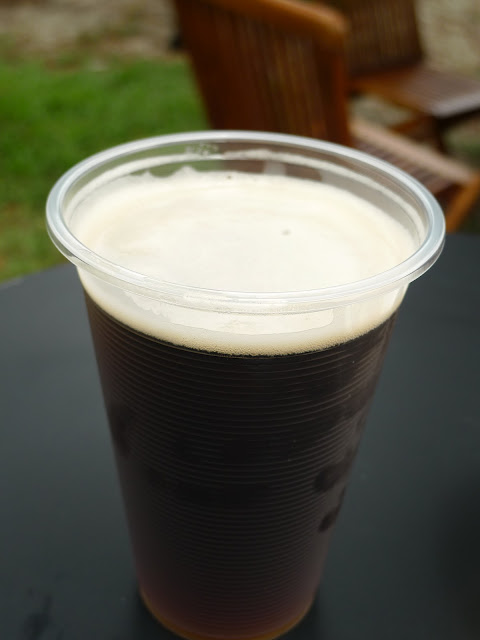 Then it's back out in the sun for some food. Good thing there's ice cold beer! This Russian brew wasn't very tasty but given the heat, it was mooch welcome. 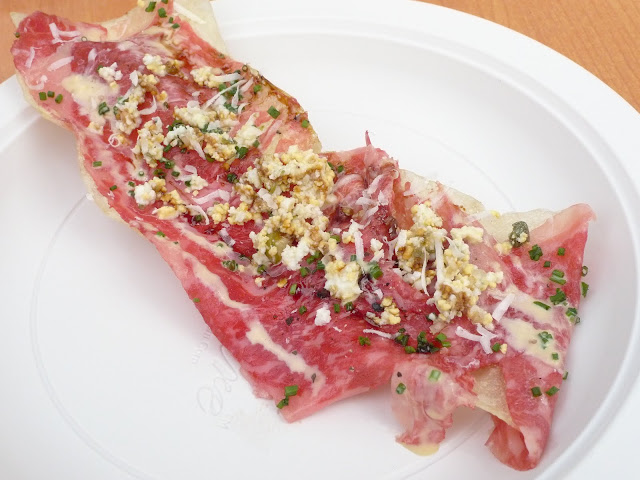 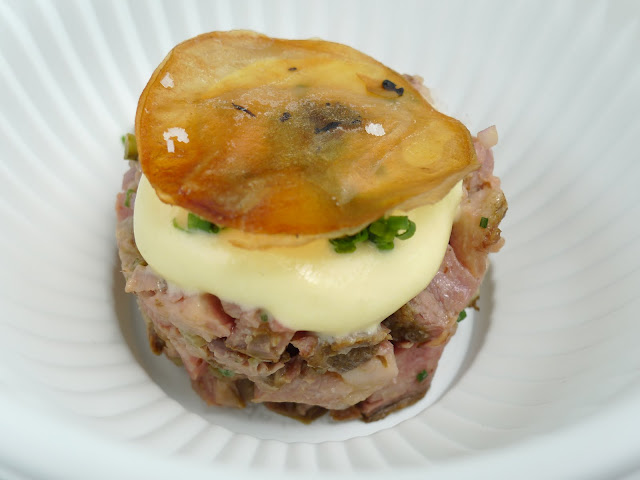 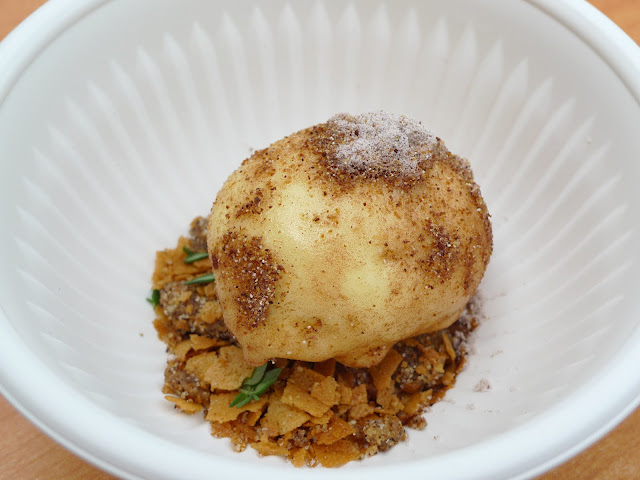 For dessert, we opted for Chez Dominique's Potato and Malt. Fronted by Chef Hans Valimaki, this Finnish restaurant served up one very intriguing dessert that looks like a potato. Crack through the white chocolate shell and the inside reveals a potato ice cream that is both savoury and sweet. Nice textures too.

Moo thoughts on Savour. I like the concept and the feel of the event. The opportunity to try the signature dishes of many famed chefs in one place is great! If only the food prices were scaled back a bit. Portions were small, it's self-service and disposable plates/bowls were used after all. The other thing being the duration of the sessions could have been longer. I mean with the choice of so many classes to attend, an array of booths to visit and a good number of wines to taste, one can't and should not have to rush through it all....especially on a weekend.

Thanks to Nespresso, CROWD and Savour for inviting me over. 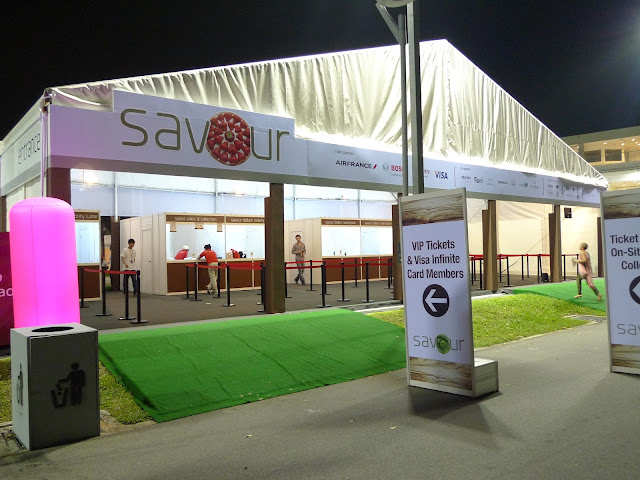 Chew On This: Savour 2012 featured 15 award-winning chefs, including chefs from the world’s top 100 restaurants and Michelin-star recipients, and 50 of their signature dishes to sample from $6–$21!
Posted by The Hungry Cow at 7:09 pm

Enjoyed reading your article and the food looked good