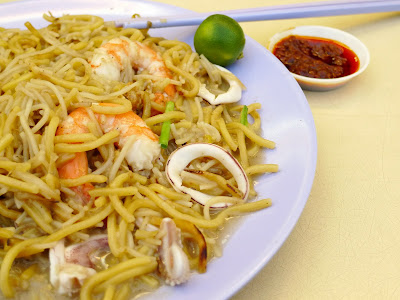 The Hokkien Mee ($5 for medium) here is pretty nice- moist and a little saucy, relatively fresh seafood with its flavours infused into the noodles. The chilli and a squeeze of lime added a good depth to the dish.

You know what's the amoo-sing thing? No name but still got queue! Moohahaha. 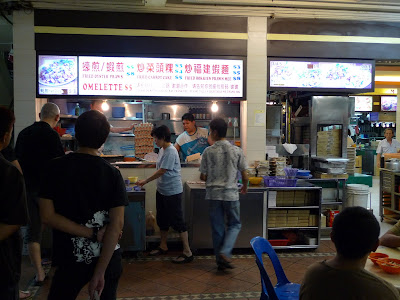 Chew On This: This stall serves up fried carrot cake and oyster omelette too. I saw them steaming the carrot cake! That should be a good start. :)
Posted by The Hungry Cow at 11:37 pm 3 comments:

There are some days when one dish would give so much comfort that we call it, well, comfort dish. Moohahaha. 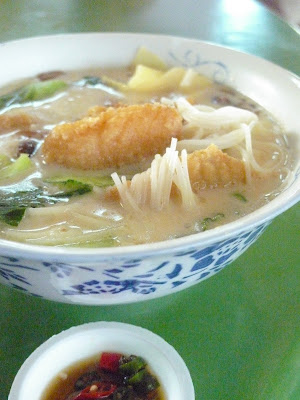 This bowl of Fried Fish Bee Hoon from Jin Hua at Maxwell Market is one such dish to me. Somehow fried food is always comforting (even if just psychological). The fried chunks of fish meat here were tasty and being dunked in the soup, had absorbed more flavours. The soup here had evaporated milk added which gave it a sweet, milkiness. Heat from the ginger and fragrance from the fried shallots and Chinese cooking wine balanced out this soup nicely.

Instead of just the usual red chilies in soy sauce as a side condiment, they mix green chilies here too. Great for those who like the tangy-spicy touch of the green chilies.

These days when the weather has gone wonky, this bowl is pure comfort- come rain or shine. 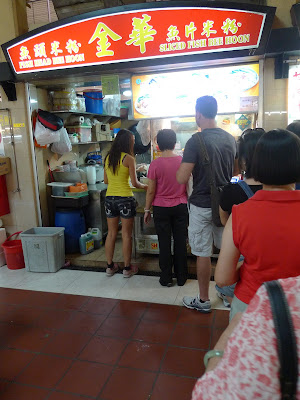 Chew On This: The bee hoon here is a medium thickness variety! In between the thin ones used in fried bee hoon and the thick version used in laksa. I think it gives a good balance between mouthfeel and the ability to absorb flavours.
Posted by The Hungry Cow at 10:31 am 3 comments:

For those who are here after reading December's CLEO issue, sorry you had to see this non-food blog post. But I guess that's the beauty of blogs. It is something personal and I use mine as a platform of expression.

Foodie posts will resume after this tribute entry. 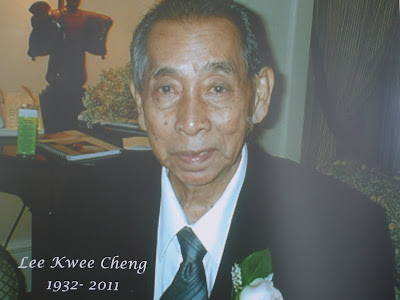 Last Friday (11/11/11) at about 4.10am, my Ah Kong passed on. I had mixed emotions- part of me was happy that he no longer felt pain or suffering, another part of me grieved.

My earliest memories of Ah Kong was at Nam Hong, a family provision shop at the junction of Serangoon Road and St Micheal's. Then I was perhaps only in primary school. Ah Kong loved when me, sis and my cousins came over. He would give us sticks of rainbow paddle pop ice cream. I can't recall that much during that time except oddly of the old school toilet (metal door, concrete squad type, single light bulb hanging from the top) and pulley system of 2 Milo tins used as a cashier's storage for money.

Every Sunday, the entire family (Ah Kong had 8 children) would gather at his 3-room Ang Mo Kio flat for dinner cooked by Ah Ma. Her ngoh hiang, chili fish, mee hoon kueh, hae bee hiam and pig's stomach soup were awesome by the way. With so many people crammed into the flat, dinners were usually a sweaty, sticky affair. I remember the times we spent watching variety shows like Gao Xiao Xing Dong sitting on the floor. No air con, no PSP, no iPhone. Despite the seemingly lack of modern comforts, dinners at Ah Ma's house were always noisy and happy.

I grew closer to Ah Kong only in my Secondary school days when he and I both manned the bar counter at our family's steamboat restaurant at Prinsep Place. Ah Kong made his popular Suan Mei Tang (Sour Plum Drink) alongside soursop drink and the occasional pineapple drink. His preferred mode of transport was always his bicycle and he often cycled to Poon Huat to buy ingredients for his drinks. Bottles of citric acid, flavourings and colourings filled his cupboard. It's amazing how he even knew what to use and buy without attending any formal training and especially with the labels in English!

Because Ah Kong and Ah Ma both spoke mainly Hokkien, I picked up the dialect to be able to communicate with them. As a tribute, I gave a short eulogy in Hokkien.

If you are wondering about the "Superman" in the title. Well, Ah Kong accepted Jesus later in his life and his friends at New Creation Church's Hokkien service gave him the nickname after he, at the age of 70, made it to the top of the hill in Israel beating people less than half his age. Power lah!

Foodwise, I will always remember Ah Kong as a fan of sashimi and beef. Salmon, tuna, swordfish, octopus, squid...he ate them all. He liked beef soup, shabu shabu and steak. I think I just realised where I got my cow-loving genes from. ;) 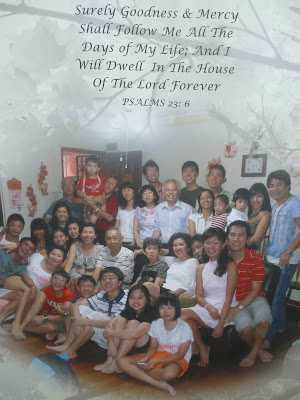 One big family misses him. Finding strength through faith and family togetherness.

Though Ah Kong is no longer physically with us, I know that this separation is but temporal. And that we will all reunite again one day in heaven.

To my dear Ah Kong, I bet you are enjoying yourself in a glorified body with Jesus. Can't image the awesome sashimi and beef in heaven. :) 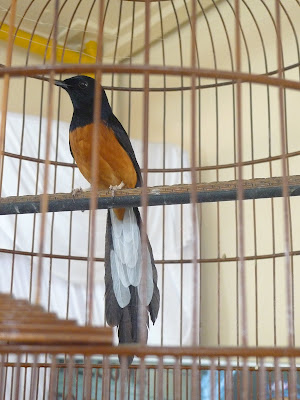 Just in case you miss your favourite bird, here he/she is. Granduncle will take good care of it.

A big thank you to all family and friends who have lent their support and sent heartfelt condolences via FB, Twitter, SMS and visits.
Posted by The Hungry Cow at 3:39 pm 2 comments:

Catching Up Over Ramen

Having missed the first 2 days of Wine for Asia this year ($#@%!), I was only able to visit on the last day which was opened to the public. This sucked as quite a few wine merchants had packed and left their booths empty. Also equally annoying, people now had to pay a fee to taste this year's winners of the Wine Style Asia awards.

Any that's for another story. I was happy to meet a few friends at Wine For Asia- RecentRunes, Qisheng, Tommy, Alice, Lawrence etc. After the exhibition, Qisheng and I headed for dinner. It was a simple and satisfying ramen dinner.

At Keisuke Tokyo, one can choose the level of taste/saltiness of the soup, ramen texture, onion and chicken oil etc. Pretty customisable to suit personal preferences. For mine, I opted for "normal" for everything. 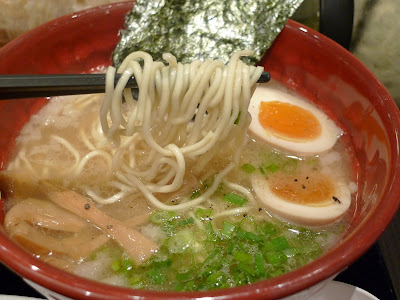 I had the Tokyo Style Pork Broth Ramen with Flavoured Egg ($13). The soup was milky and tasty. A little salty but perfect with the firm, straight egg noodles. A slice of charshu, spring onions, seaweed and a yummy egg with a semi-solid yolk completed the dish. Oh and btw, there was chicken oil in this bowl of ramen. It provided a smooth coat to the ramen and had a light perfumed. 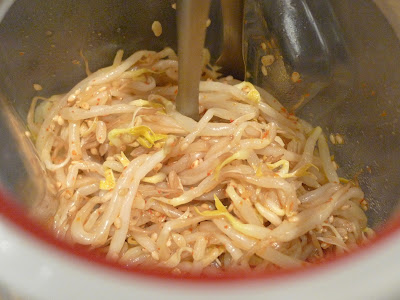 For added omph (which is always a good thing. Moohehe), I suggest adding heaps of the beansprouts. Served slightly chilled, it was a bit spicy and fragrant with sesame oil. It also gave the noodle dish a refreshing crunch. 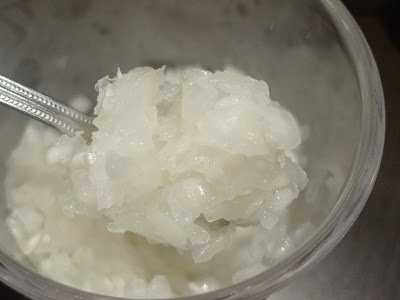 Add some onions in too for more depth. On its own, it was astringent and unpleasant but when a small amount was added to the soup, it became sweet and balanced.

I forgot to take a shot of the bonito flakes that was another optional topping but DO add it! Moo-re umami flavours. Mmmm. 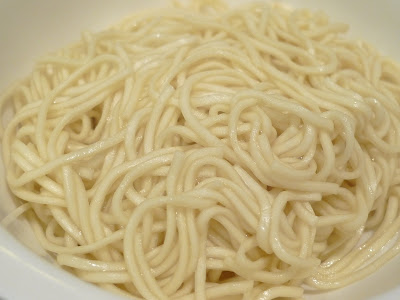 If you're hungry or have four stomachs too, order another serving of ramen at $2.50. Just indicate to the wait staff after finishing the original portion of ramen and they will bring you your additional serving. Remember to keep some soup though! 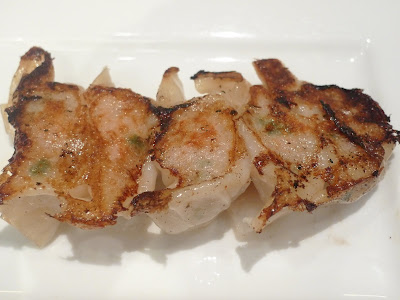 We decided to try the Yaki Gyoza ($5 for 5 pieces). But I was disappointed with these. The skin had a nice chewy bite but the filling had no feeling- smallish and a bit bland. :(

But anyway, it was good catching up with Qisheng! 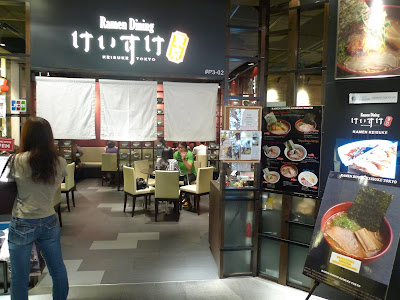 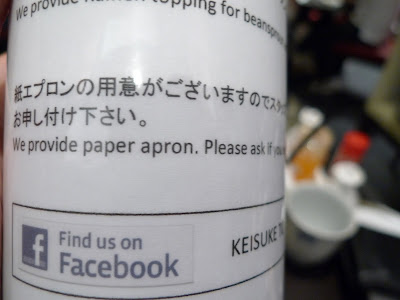 No fear of splashes and messy eaters for dining companions here! :p
Posted by The Hungry Cow at 2:09 pm 5 comments: