One of my favourite episodes of The Noose is the one featuring taxi drivers learning French to better communicate the many French-inspired condominium names around Singapore.

But mixing French with local culture is no more a joke. One of the bastions of local culture- the ubiquitous kopitiam, can now boast a French stall! Alongside stalls selling kopi, char kway teow and taukwa pau, Savuer serves up duck confit, chicken roulade and wait for this...

Foie Gras (60g- $14)! Yes, that beloved goose liver dish usually found in posh restaurants and bistros is now at a kopitiam. From my visit, it wasn't the best foie gras I've had. But at this price, it was a very good deal. Nice, buttery rich flavours with just a slight crisp on the surface. The bed of lentils were much simple and rustic and delicious.

For starters, try the Duck Rillette ($4). Three very well-buttered slices of French loaf came with a duck rillette that was salted and not too gamey. 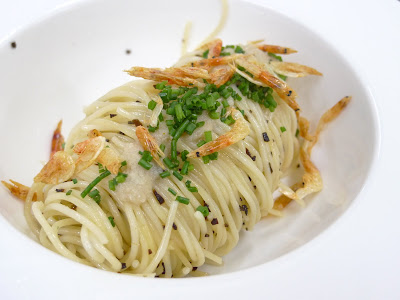 With the Angel Hair Pasta with Konbu ($4) staring at me from the menu, I knew I was going to have to order it. This turned out not too bad with a clean, slightly sea-savoury taste but would have been better chilled down a little more. The tiny prawns gave light punctuations of crustacean flavour. 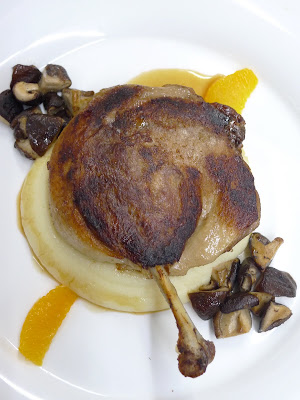 Their Duck Leg Confit ($8.90) has been raved about in The Business Times. I thought it was ok on the whole but the skin lacked crispness. But the mashed potato was absolutely yummy with a buttery lure.

I had wanted to order the Salmon Confit (which, btw is cooked a la sous vide in a kopitiam mind you) but it was sold out! That dish looked really good and judging by the number of people who were tucking into it, it seemed popular. 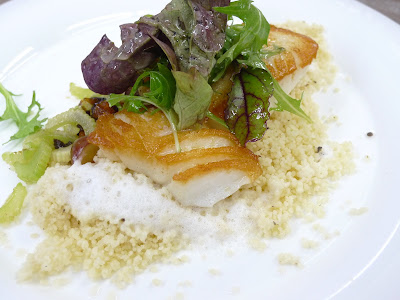 But it still ended well as the Pan-Fried Cod Fish ($12.90) was rockingly good. Very impressed with its crispy salted crust and moist interior. It lay over a mound of couscous and was accompanied by sliced celery. Unfortuntely, this cow cannot tahan celery so I didn't enjoy that veggie side and the bit of celery-tasting foam.

In a nutshell, the food here at this months old stall isn't refined French fare and sure, there's space for fine-tuning and ironing out kinks but I like that it is the dream of two young chefs.... and that valued-for-money foie gras can now be a lunch option alonside local fare in a kopitiam.

After dinner that day, I craved for a glass of wine. Hmm...now to check if they allow BYO.

Chef-owners Dylan and Joshua are both Shatec-trained and have worked their way in French restaurants here before striking it out on their own. A big applause to their guts for entering the competitive and tough F&B scene, and for bringing French food to a kopitiam. :) 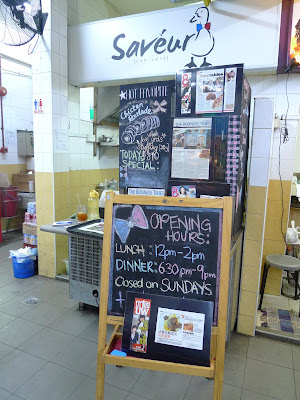