Somehow thanks to a discount voucher bought off Beeconomic, we found ourselves at Veganburg- a cosy, interesting vegan concept near Eunos.

Burgers here contain no meat. In fact there wasn't any cheese as well! Vegan mah. 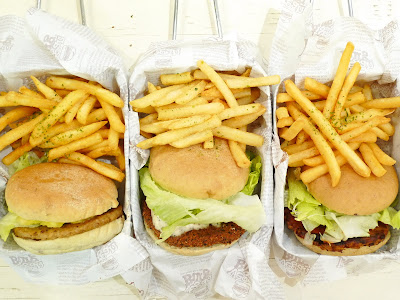 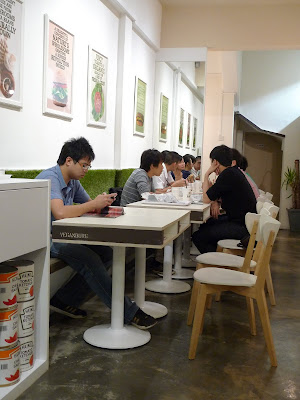 Served in a mess tin, it was slightly reminiscent of Barracks and an ingenious way to save on washing since the overlaying paper is disposable. Veganburg is bright, fresh and casually cool. The whole vegan burger joint concept is pretty novel (to me at least).

Since they do not use meat, soy and minced mushroom patties were used instead. Was it as good as meat? Honestly, no. But then again it is not meat so it should not be compared directly.

The Hawaiian Pineapple burger offered a pan-grilled pineapple slice and a soya patty glazed with plum sauce. Not too bad though the "mock meat taste" of the patty was a tad strong. I like the organic ciabatta as burger buns- crusty and fluffy.

The Cracked Pepper Mayo burger appealed more with its initial peppery punch, soothed by creamy mayo beneath a bed of lettuce. The organic ciabatta for this burger contained sunflower seeds, pumpkin seeds and walnuts. Lots of good oils!

Smoky BBQ burger featured an oven-baked minced, mushroom patty that was savoury and slathered with BBQ sauce. Tomato slices, lettuce and alfalfa gave it crunch and a pleasant vegetal sweetness. The bun for this burger was an organic rye with wholemeal grains.

Overall, the burgers were pleasant as long as one doesn't expect them to be like a cheeseburger. Fries had a nice sprinkling of seaweed but I feel they could be more crispy. 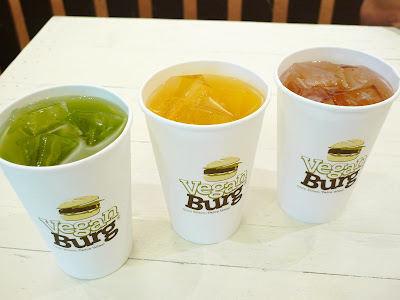 The set meal came with a choice of juice (apparently no preservatives and added sugar). Since we had 3 set meals, we picked 3 different juices to try. Then we realised the colours looked like a traffic light! Moohaha. 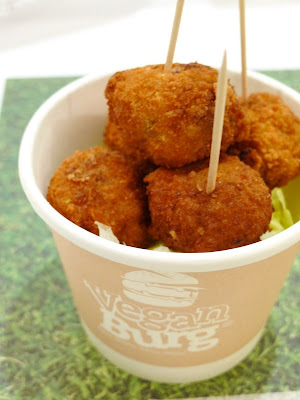 We also ordered the Potato Spinach Pops ($3.80) to try. Unfortunately, it was disappointing. Maybe they should look to a good bergerdil for inspiration. 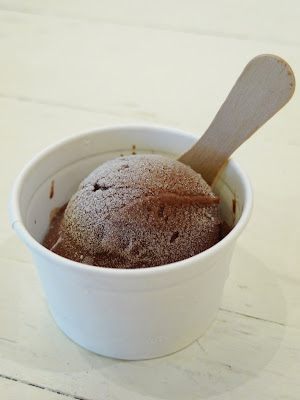 For dessert, the Guilt Free Chocolate Ice Cream ($3.80) was interesting. The chocolate flavour came through with a subtle background of nuttyness from brown rice. A rather light and refreshing ice cream. I assume they used soya milk instead of cow's milk too. 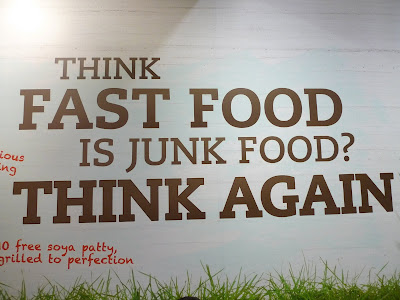 Yes, this is fast food with a healthier twist. Going meatless one meal a day (some say breakfast cos they skip that meal!) or once a week, be it for health, religious or environmental reasons, is not that difficult. And Veganburg offers a good starting point.

All their products are plant based and made entirely free from dairy. Their patties do not contain gluten, genetically modified organism product, preservatives and transfat.

Then we headed for a pint of Tiger beer....which is a great way to end a work week and coincidentally it's meatless too . ;) 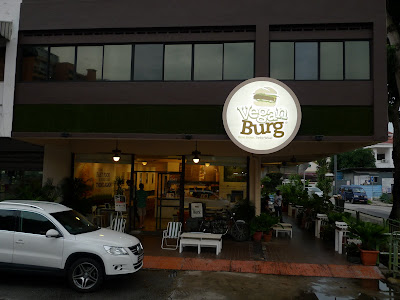 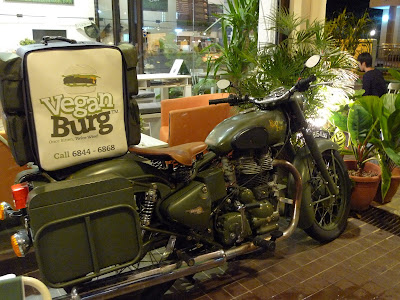 Lazy to get there? Veganburg delivers too! Call or check their website.
Posted by The Hungry Cow at 9:48 am

wow...it's nice that they have a vegan fast food there... having healthy resto is a step to over-all wellness of the country :)

I have been to this place and like the food. I would like their patties to extend beyond mushrooms and soya though. potato based veggie patties can be made relatively easily and are tasty too.

Anonymous: Cool! Potato veggie patties sounds delish. As consumers, it might be good to suggest to their management. You never know when what you wish for may appear on a regular menu!