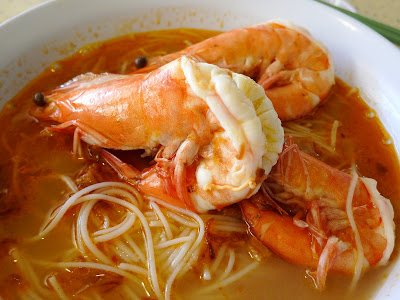 Most Sunday lunches are had with the parents and grandparents. I like the idea of 3 generations at the same table! We usually eat at Food Republic at Suntec City (Ok, now you know where to find me on Sunday) as it's the most convenient option near church. That way, my grandparents do not have to walk much.

But sometimes we have a "break" when folks are travelling or when the grandparents' church service is not in Suntec City. During one such Sunday, we relished the opportunity of eating out of Suntec! Moohehehe.

Having heard a lot about the prawn noodles at Cambridge Market (Pek Kio) but not having tried it, we made our way down. 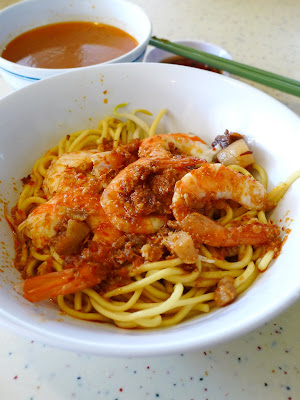 I ordered Prawn Noodles Dry ($3) and was staring at the smallish prawns. Not quite the large prawns people were raving about. Then I saw the lady behind me with bigger prawns! Upon asking the auntie at the stall, I realised that because mine was $3, my prawns were also $3-sized! LOL.

Oh well. These prawns were alright but not outstanding. The noodles were mixed in a sauce with kick-ass chilli and pork lard. Pretty good.

Then I returned to the stall and ordered a $5 bowl of Prawn Beehoon Soup! 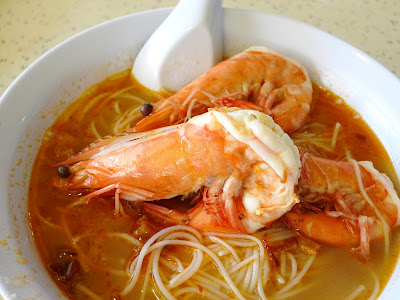 This had much bigger prawns- one big and two medium sized. The prawns were sweet and succulent! Lots of prawn head juice to suck on. ;) The soup was rich with the goodness of prawn shells/heads and satisfying.

We also got tempted and tried Siew Yok Rice and Hor Fun from two other stalls but the former was ok and the latter CMI! The prawn noodles were so much better and come back for more I will. 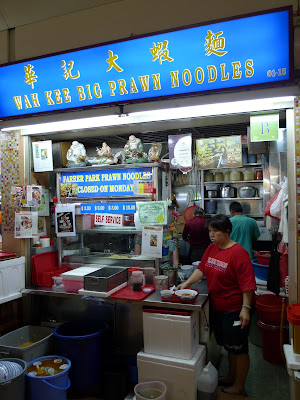 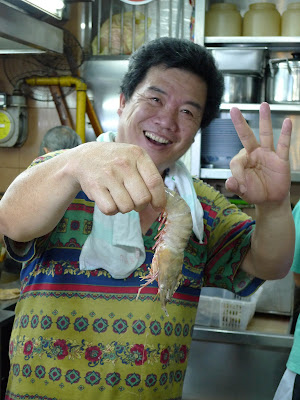 The friendly uncle correctly guessed that it was my first visit to his stall and told me to come back for the $8 prawn noodles which featured more of the big prawns in a separate bowl. The prawn in his hand is the XXXL one! A $15 bowl comes with 3 of these prawns and free noodles and soup.
Posted by The Hungry Cow at 3:46 pm

Thats a massive prawn in the last picture: It would be a bit of a mission polishing 3 of those in the $15 bowl, not forgetting free noodles and soup:)

I've tried the $10 bowl from here and the soup is damn solid! Very intense prawn flavour.

Three-Cookies: That mission would be to die for!...with pleasure. ;)