Back at Yet Con for Steamboat

My previous visit to Yet Con was at Xiao Hei's suggestion and while I enjoyed the Hainanese chicken rice, pork chop etc, I was curious about their steamboat. Quite a few tables ordered it and it looked pretty tempting! Then Eunice, a reader of this blog, commented that I should go check out the steamboat.

So I did return one fine evening when Pookie wanted to meet for dinner. And we had the steamboat! 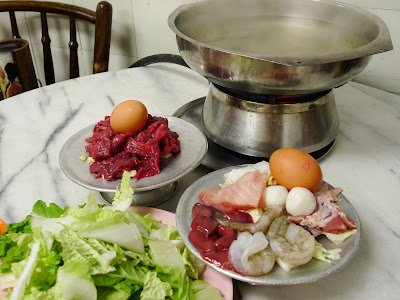 This was the portion for two people. I like the rather generous plate of veggies which is rare in Singapore. There was a good mix of everything from beef, pork, fish, squid, prawns, fishballs, pork liver to eggs. The soup stock was light and chicken-flavoured with just a few drops of shallot oil. But it gained strength and intensity as dinner progressed.

I like the beef slices (I am guessing flank) here. They were plenty (yay!), thick and tenderised just a little to give them a smoother feel. The marinate was also tasty with sesame oil and, I think, soy sauce. Simple flavours that complemented the beefy taste of the meat. 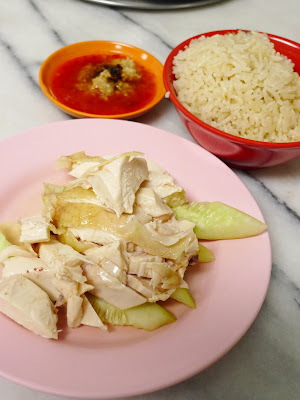 Because Pookie had not tried the chicken rice there and we were greedy hungry, we also had the chicken rice. We ordered just one person's portion of chicken to share. Nice rustic, flavourful chicken with rice flavoured with shallot oil and chicken fat.

Now I realised I missed out their seafood horfun which Ice recommended to try. Dang. Looks like another visit is on the cards. Moohehehe.

Total price for two for the steamboat, one person's portion of chicken and a bottle of Tiger was about $30. Definitely accessible and a good change from turkey season. 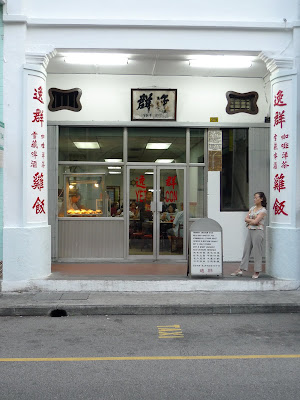 Chew On This: I don't eat pork liver but love drinking liver soup! So I made some by ladling hot soup into a bowl of raw liver and mashed it with my chopsticks. Let it sit for a bit and ta-da! Instant liver soup! LOL.
Posted by The Hungry Cow at 1:41 pm

Interesting pic that first one. The egg on the beef. Going by experience, I believe you are supposed to beat that egg in with the beef

Highlander is right. The egg smoothen the beef, but you don't have to if you don't want. You rightly said the sesame oil is good enough. The marinate IIRC has nam yu in it. I really like the idea of eating chicken rice with steamboat!

I still prefer just eating their pork chops here, I find the steamboat a little lacking in flavour :P

highlander: Oops. I cracked the egg into the soup and made soft-boiled egg instead. Moohehe.

Tiantianchi: Will mix the egg with the beef the next time to try it. Btw, what is IIRC ah? Chicken rice with steamboat was good. :)

alkanphel: I like their pork chops too. The steamboat is light at the beginning but gao gao at the end!