It was an impromptu dinner decision to check out Upper Boon Keng Market & Food Centre. It has been a while since the insing.com assignment to review the kambing soup there. 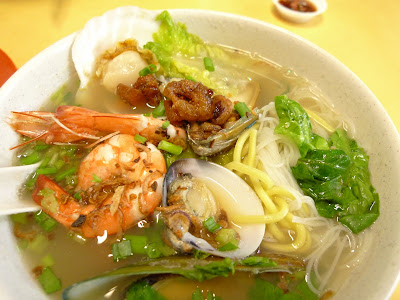 The Seafood Noodles ($4.80) consisted of yellow egg noodles and bee hoon in a light and tasty seafood broth. See food? Got two prawns, one mussel, one scallop and 2-3 clams! Very good value indeed. Generally fresh and cooked perfectly, the seafood were scrumptious. My favourite was the prawns- medium-sized, sweet with a nice naturally springy texture. 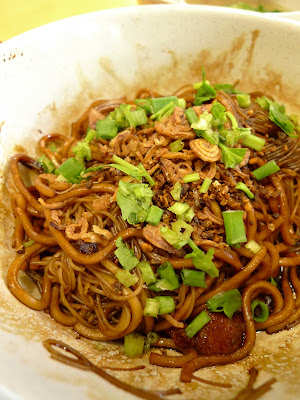 Their Mixed Pork Noodles Dry ($3.20) was a nice different take from the normal bak chor mee. The thick egg noodles and thin bee hoon were tossed in pork lard with crispy bits and a dark sauce. A drizzle of shallot oil and fried garlic added more fragrance and flavour. No sharp vinegar, spicy chilli sauce or tangy ketchup in here. 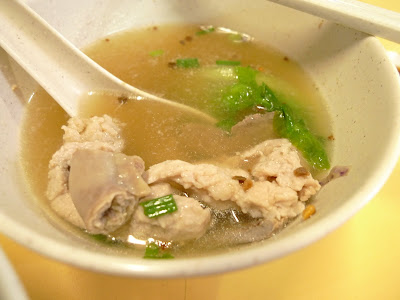 The soup contained pieces of tender sliced pork, intestine and liver. It was a robust soup that was very good.

It could be just me but I detect a common line between the two noodle dishes. There seemed to be a slight alkaline, "kee" taste that blended in together with the flavours of the other ingredients. Nothing really offensive (unless one is super sensitive to "kee" taste). In fact, it was balanced and offered a rustic character. 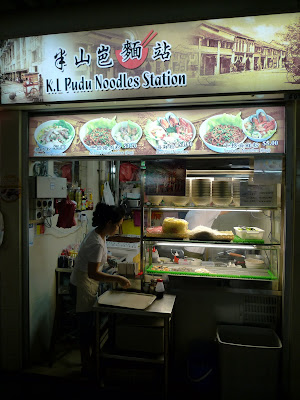 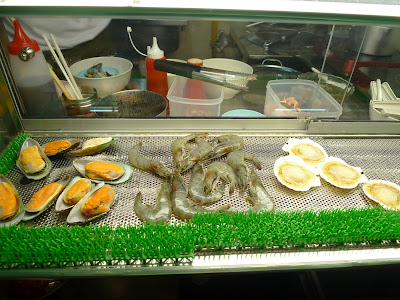 How often does one see this display at a hawker stall? :)
Posted by The Hungry Cow at 12:36 pm

It was indeed a very tasty experience. The dry version is most definitely something out of Singapore. The soup is so tasty that I finished every drop, which I normally don't.
Will definitely recommend it to others. Two thumbs up.

Anonymous: Glad you enjoyed the food at this stall! Four hooves up. :D

Wow! Thanks Hungry Cow for helping me find something that is close to the heart. After nearly 20years here, I finally found the type of noodle that I have been longing for. The dry noodle is cooked exactly the same manner as the KL style and the seafood is fresh. Pork is soft and soup is especially delicious. Thanks to you I have been going there every other day to eat til my heart content. Hou Hou Sek! (Cantonese)

Wonderful and indeed this was the first time for us to have such noodle in Singapore. It is so local exactly like what we are having at KL! Just like the taste~ yummy~

Chance upon this stall while browsing for some moo moo food and boy, was i blown away! The soup is soooo tasty. Man, sure to go there again, soon.

Hello! Thought u should know that the KL Pudu Noodle Station has moved to Revenue House Food court (Level 2 Stall 7) at 55 Newton Road. It's opposite the Novena MRT St. Laymen term its simply call the Income tax building. Looking forward to your arrival.

Anonymous (again): Thanks for the info!

I went Boon Keng to look for this stall but was in vain. Another blog says it has moved to Revenue House. Does anyone know about the stall's operation hours?
Thanks

Just found out that the KL Pudu noodle station operating hours at Revenue House is 7:30AM to 2:30PM. Monday to Friday only.
Menu now includes All Prawn Special, or all mussel special. Whats more, if you happen to be there before 11am, do check out the $1.20 Chicken porridge breakfast special. It's quite different from your normal porridge.

YimWC: There is a comment here that mentioned this stall has moved to "Revenue House Food court (Level 2 Stall 7) at 55 Newton Road" and operation hours are "7.30am to 2.30pm only on weekdays".