Putien for me has been one of those places that people rave about but I fail to understand why....until this recent opportunity to re-experience Putien as part of its 10th anniversary celebrations. 10 years?! Wow. Didn't realise it has been around for 10 years. Certainly a milestone worth celebrating in the challenging Singapore F&B scene!

We had a mixture of old Putien favourites and new dishes: A hot cup of Tie Guan Yin ($4.90) is always nice with a meal. Putien uses whole tea leaves in a cute steeping cup that many customers have apparently asked if they can buy! 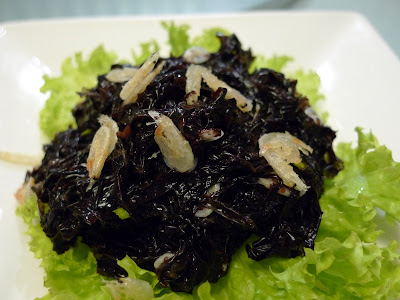 Mini Shrimp with Seaweed ($9.90) was a simple and light starter. Slightly vinegar-y, the shreds of seaweed packed a nice salinity from the sea. 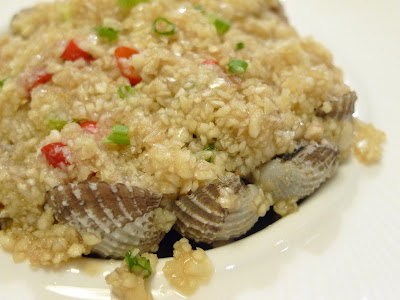 Drunken chicken I like. Drunken cockles ($9.90) I must be drunk first then maybe I'll like. Being a cow that doesn't eat cockles, I passed on this dish....but I did nibble the toppings and pwah! Garlic kao kao! 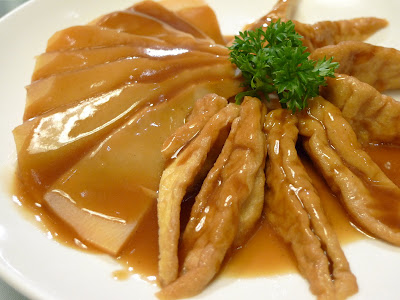 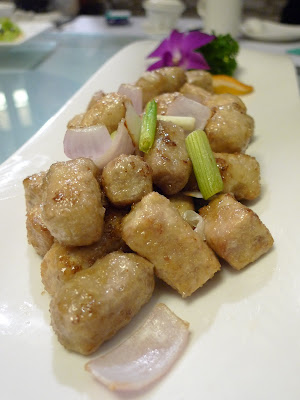 A signature dish of Putien, the Stir-Fried Yam ($16.90 for medium portion) spotted a crisp exterior with a warm, puffy core of mashed yam. The natural sweetness of the yam was enhanced with just a bit of sugar/honey. Moreish and very good indeed. 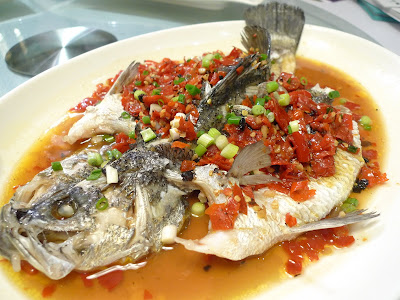 A unique dish here that is not quite typical Pu Tian was the Steamed Seabass with Chilli ($35.90). People in Pu Tian (the city) do not feature much chilli in their food. This dish was tweaked to suit the Singaporean palate which often cannot do without sambal. The seabass was firm and the chilli-garlic-fermented-soybeans added much flavour though a pity that the natural sweetness of the fish was overwhelmed. 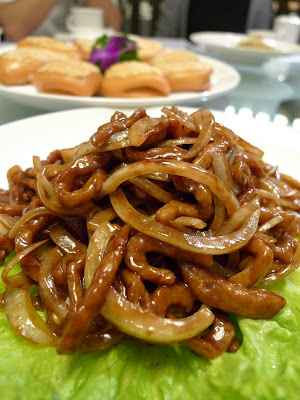 Shredded Meat with Bun ($3.90/piece) was another tasty dish. Strips of pork were stir-fried with onion and imbued with beautiful wok hei, before being fed into the cavity of the deep-fried bun. 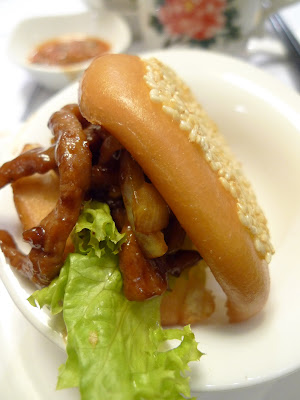 Here's one after self-assembly. The classic Chinese burger. :p 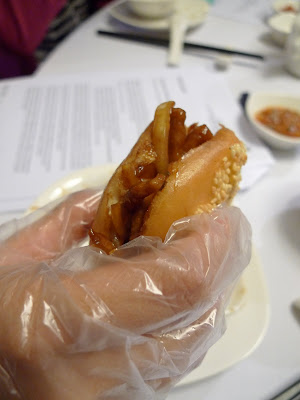 And for those squirmish to use their bare hands to assemble this item, Putien provides gloves! 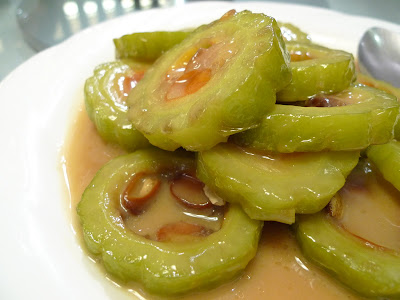 My personal favourite dish that afternoon turned to be the Braised Bitter Gourd ($16.90 for medium portion). It was simple- thick rings of bitter gourd quickly stir-fried and then braised till tender. The balance between the pleasantly bitter-tangy (Hokkien call it "kum kum") gourd and savoury sauce was perfectly inviting and appetising. Very dangerous with lots of rice. And interestingly, the seeds and reddish-whitish inner flesh were not removed. Chef said they added flavour.

On to some carbs! 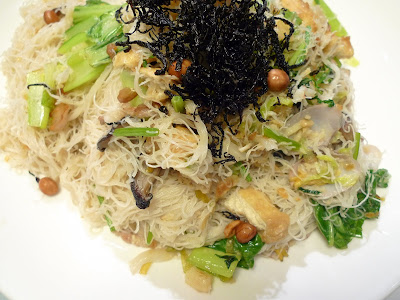 The Fried "Hing Wa" Bee Hoon ($23.90 for large portion) was very refined both in terms of texture and taste. The thin bee hoon was made in-house and was delightfully soft with a good bite. Bits of veggie, peanuts, clams and prawns made up the main ingredients of this dish. The result was a simple and delicious medley of these light flavours. 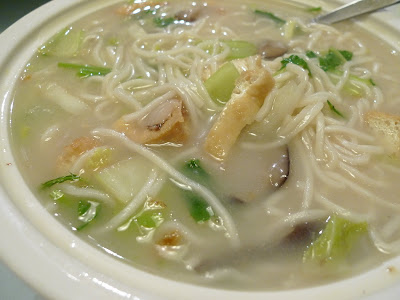 For something with sauce, try the Putien Lor Mee ($15.90 for medium portion). Unlike the darkish gravy and loads of chopped garlic and vinegar in the local-style lor mee, the Putien version was lighter in colour and flavours but was no less tasty. The gravy was lightly starched and was sweet with flavours of seafood and, I suspect, pork bones. 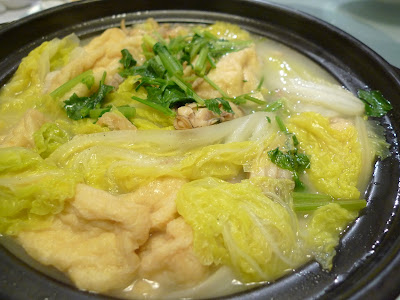 The last dish before dessert was the Braised Beancurd & Chinese Cabbage Soup ($39.90 for large portion). I felt it was a tad pricey for a simple soup. Nonetheless, the soup was homely and had more of that delicious Putien-made beancurd. 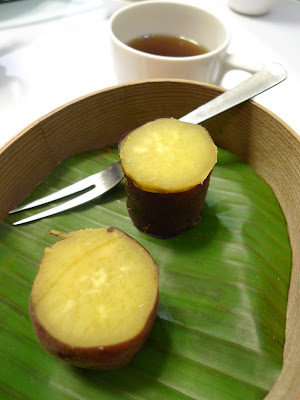 As a sweet and relatively healthy ending to the tasting, we had the Japanese Sweet Potato with Ginger Tea ($3.90). Simply steamed, the sweet potato was naturally sweet and paired well with the spicy ginger tea. Definitely a dessert to have on a chilly, rainy day! Just remember to keep some stomach space or share this with friends as it can be quite filling...especially if you don't have four stomachs!

Overall, the appeal of Putien's food is in the freshness of the humble ingredients. The flavours here are relatively lighter and seafood-based due to Pu Tian's coastal influence. And there is no beef on the menu as many people in Pu Tian worship Ma Zhu.

Thanks to Putien and linea Communications for having me over and once again, congrats on Putien's 10th anniversary! 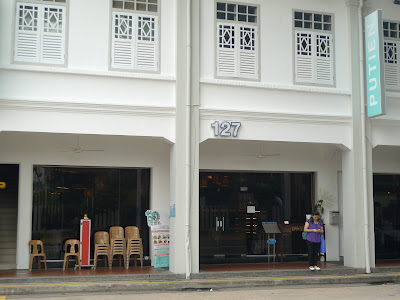 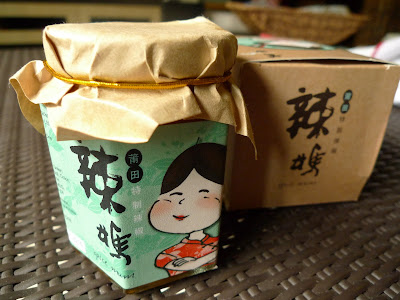 If you like their potent chilli sauce, you can opt to buy a bottle back home for your own enjoyment! Salty, slightly fermented flavour with a sharp vinegar backbone and ends spicy with a chilli padi kick!
Posted by The Hungry Cow at 9:30 pm

I love the part about the Chinese burger and gloves. It's funny that they would give you gloves with the dish. Then again, most people don't really expect to get their hands dirty when eating Chinese food.

wowowowowow, your photos speak volumes....I for one love copious amounts of garlic, yam and sweet potato. So your post really got me hooked. Did you eat at the Kitchner Road restaurant? Thing is do all Putien branches have these items on the menu? There is a Putien near where I live - Parkway Parade and Tampines Mall. Im not sure if they all have it.
Would you know?
Thanks!
janalin

Dave: So true! Don't see gloves at KFC or MacD's. I wonder if we'll see the day where gloves are used when eating Indian food with hands.

Janalin: Thanks for the compliment. Yup, this was at the Kitchener Rd restaurant but I believe all Putien outlets would also have them. To avoid disappointment, best to call in advance to confirm and reserve! Yay, sounds like a fellow eastie. :)

Hey hungry cow
thanks for the reply. :) I will be sure to call the outlets in the east before I troop down there with my folks. Thanks for your regular posting, I thoroughly enjoy the way you write and your pix. If man can live on food blogs alone, I will be one happy satiated camper. Alas....it's not too be.Anyway, I am fortunate I can live and eat well through you. hahah! :)Keep up the great eating and gargantuan appetites.
janalin