People who really know me are aware that this cow is rather health-conscious for a foodie. Yes, I do indulge in sinfully rich and unhealthy stuff but it is always in moderation and I "compensate" by having lighter and healthier meals before and after.

Some healthier choices I have developed over the years include ordering soy bean milk with less syrup, cooking brown rice at home, opting for the non-fried items at yong tau foo stalls and increasing intake of vegetables and fruits etc etc.

Healthier food can be easy when cooking at home. But how about when eating out? On a recent food trail with the Health Promotion Board, we look and taste some food that make healthier choices. Each meal featured in this tour is not over 600 calories. 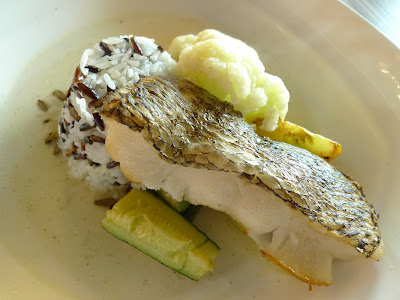 First stop was Earle Swensens at Vivocity. The Grilled Cod Fish with Wild Rice Meal ($25.90) comes with a cup of coffee or tea. This dish was very delicate with the flaky fish, poached vegetables and a light broth. The wild rice interestingly tasted like pulut hitam. Slightly chewy and with a fantastic nutty taste! 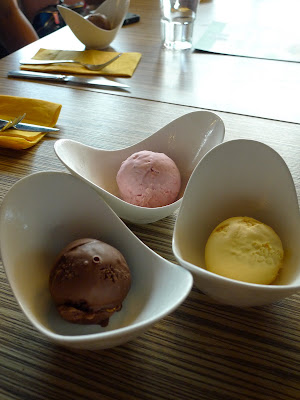 As a bonus (read not within the 600 calories plan), we had the lower calorie ice cream. While a usual scoop would contain about 300 calories, these lower calorie ones had about 200. These were very palatable though not as creamy and dense as their original counterparts. 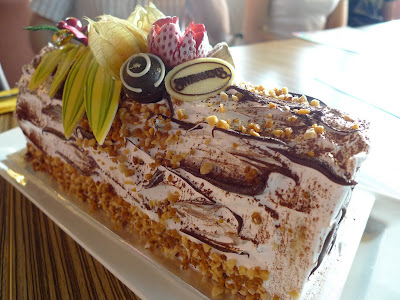 Then the bubble burst when this log cake arrived. It wasn't part of the healthier choice thing but Christmas being round the corner.... 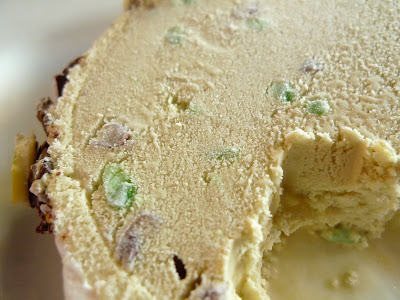 It was chendol log cake ($49)! A rich chendol ice cream with bits of the green jelly and frozen red beans. Pretty shiok. Calorie count for this would be deliciously obscene. 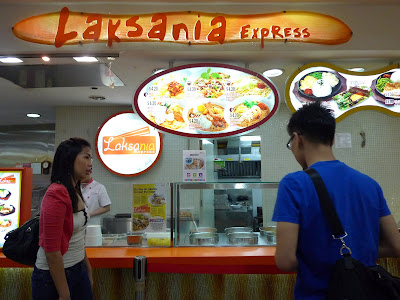 Next we headed down to the Kopitiam Foodcourt at the basement. Here we sampled the Special Laksa ($4.20) at Laksania Express. This laksa featured brown rice bee hoon and did not use coconut milk. The results were a pleasantly chewier bee hoon in a lighter laksa broth that I could slurp and slurp. I really like this laksa and I think most will not be able to tell it is a healthier version, if the coconut milk original is not present. 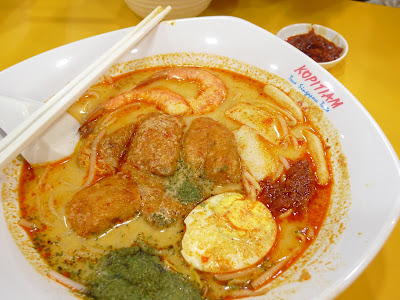 So we did a side-by-side comparison....was there a discernible difference? Definitely! The coconut milk original (over 900 calories!) was creamier and had a nice coconut milk fragrance. But as it was so rich, I could not stomach more than 2-3 spoonfuls of the gravy without feeling jerlak. The healthier one with UHT milk (600 calories) was lighter and a whole lot more pleasant to slurp! 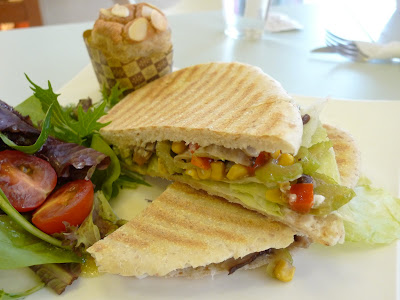 Next up was a Fresh Vegetables with Sauteed Mushrooms in Wholemeal Panini ($12.80)- it comes with a wholemeal orange olive oil cake and coffee/tea. I enjoyed the thin, crisp panini and the fresh-tasting veggies and mushroom filling. While I personally do not like celery, Michael from HPB does! Thanks for eating my share of the celery, Michael. Yes, that is a good healthier choice strategy....Feed your friends veggies! Moohahaha.

This was the most complete meal- panini sandwich, orange cake and coffee/tea all within 600 calories! 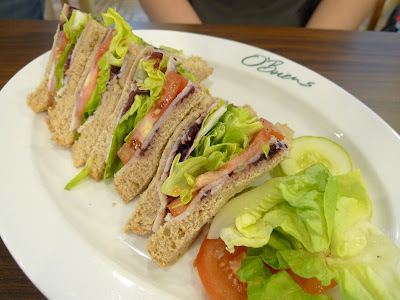 We then headed to O'Briens at SGH. LOL. Anyway, the Turkey Cranberry Wholemeal Sandwich ($10.90) was a hearty portion with the sweetness and tartness of the cranberry and lean turkey meat. This is one lunch I would take if I do not want to feel sleepy after makan. 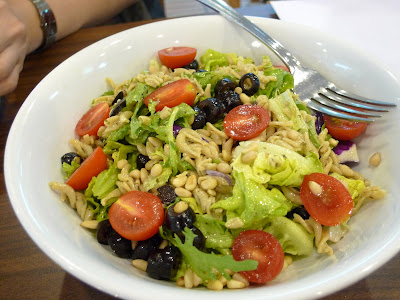 Another alternative was the Wholemeal Pasta Salad ($11.90). This was a lagi heartier portion! Lots and lots of good fibre in this bowl. Tastewise, it could be perked up with a more fragrant olive oil, crushed toasted sesame, almonds or cashew and dried cranberries. 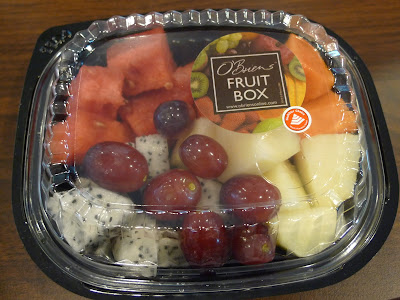 Both the Turkey Cranberry Wholemeal Sandwich and Wholemeal Pasta Salad includes a Fruit Bowl! Assorted fruits. Nothing can be more pure a dessert. 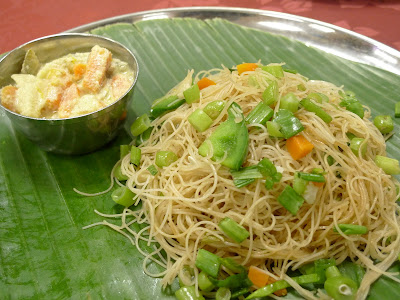 Last stop (at least officially) was at Ananda Bhavan where I previously learnt about the Putu Bola. Here we tasted Stir-Fried Brown Rice Bee Hoon with Veggies ($5.90). I guess it was stir-fried with lesser oil too as there wasn't any major oily smears or worse, leaks. Very peppery. But I prefer my brown rice bee hoon in laksa! :D 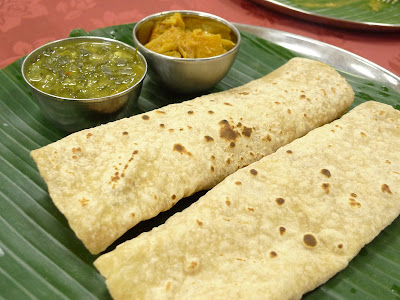 We also tried the Wholemeal Chapatti with Stir-Fried Vegetables and Chutney ($6.45). Very wholesome and healthy. 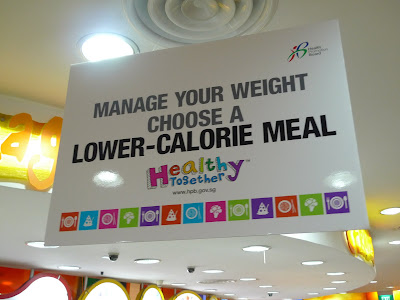 Being a foodie, I enjoy food and while I am not into calorie counting, I believe in sensible eating! No need to chew cardboard and eat bird food either. Just take small, simple steps in making right decisions when eating. Trust me, while it might seem like a compromise on taste initially, your taste buds will soon adapt and you'll actually enjoy healthier food options.

Thanks to HPB and Waggener Edstrom for the invitation and for hosting this cow. It was a very fun and insightful outing! :) 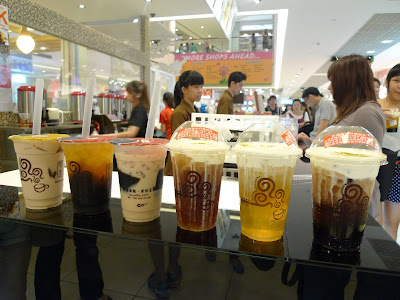 Shhh. This was an unofficial bonus stop that was not part of the trail! Moohaha. Now chew on this: the pearls in bubble tea are equivalent to a bowl of rice!
Posted by The Hungry Cow at 9:12 am