A Gathering of Old Schoolmates & Teachers that Were Not Mine

It is said that Men can't quite multi-task. Apparently this Cow too. I realise I struggle with photograpy if I am also tasked with other things (chewing not included!). So yea, pardon the quick, haphazard shots. 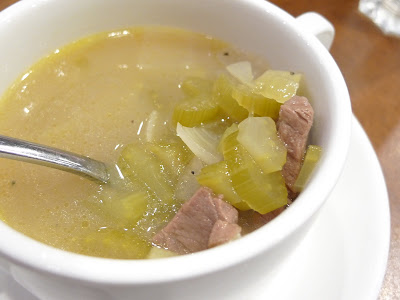 As with most ang moh dinners, the evening started with a soup....ok, there was actually bread before this but too hungry lah. The Beef Soup was a light beef broth with the sweetness of onions and celery. This was alright but certainly could have been better with a beefier taste and deeper flavour but then again Aston is not known for soups. 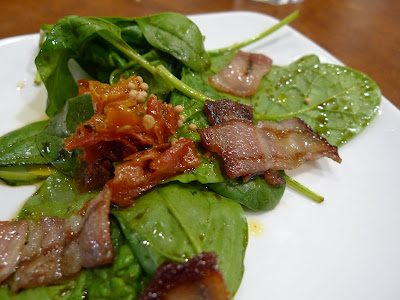 The main course was either a choice of Roast Beef or Salmon. 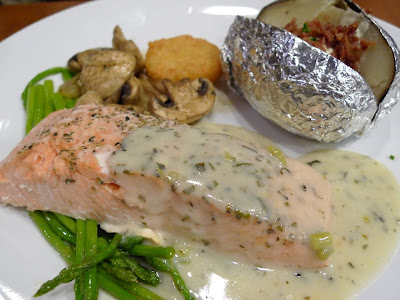 Here's a look at the Salmon. Generous portion that was cooked just right- moist and not cooked through. 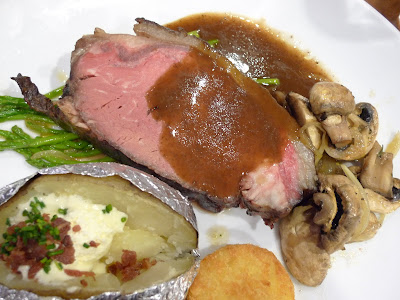 No prize for guessing my choice of main course... The Roast Beef was a hunk of a roast beef. Thick and tender, it had a gentle flavour. A few added dashes of salt coaxed out better flavour. A better thing would be to use good sea salt flakes.

I realised that generally the beef used in the steaks and roast beef at Aston Prime tends have a more subtle flavour compared to the robust, beefier-tasting ones at Aston Specialties.

Together with the roast beef and salmon, there was an assorted variety of side dishes. The Thai asparagus was sweet, young and tender. I enjoyed the baked potato with sour cream and bacon bits. The mushrooms were also tasty without being over-cooked and soggy. What I thought was a round hashbrown turned out to be rosti, according to Aston. Some commented that it 'cheapened' the look of the entire dish. While I personally agree, there's no denying that it was yummy. 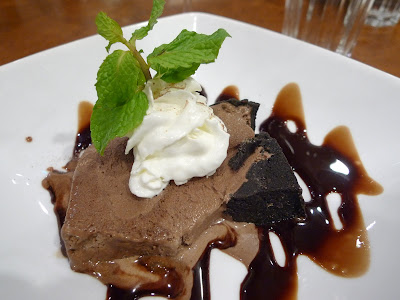 Dessert was a Mudpie with chocolate ice cream and an awesome frozen oreo base that had a pleasant hardness. 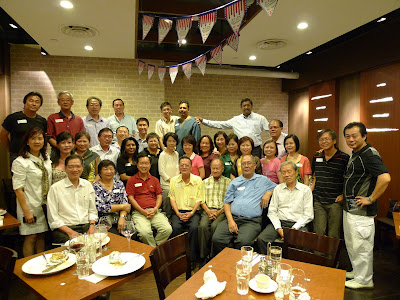 Here were the happy former boys, girls and teachers that night! Some of them have not met in 37 years!! Conversations flowed freely and the chatter was unbelievable. Though I did not understand or relate to their old school days' topics/jokes, I basked in their infectious joy and satisfaction of a happy school reunion decades after having completed school.

This dinner was a special arrangement with Astons Prime and yes, we paid for our dinner. :)

Big thanks to Aston for hosting us and to all the staff of Astons Prime for their service and efforts that evening.

Chew On This: I hope that I will have the opportunity to attend one of these old schoolmates gathering when I'm 50 years old!
Posted by The Hungry Cow at 11:58 am

Chew On This: Hope by 50 years old you can still chew cow lolx.

ice: I believe therefore I can! Moohahaha.