After missing the past two YES 93.3FM 美食鉴定团 outings due to work commitments (yes, this cow has to work), I was happy to re-join them for the latest outing at Admiral Bar & Grill one recent evening. :) 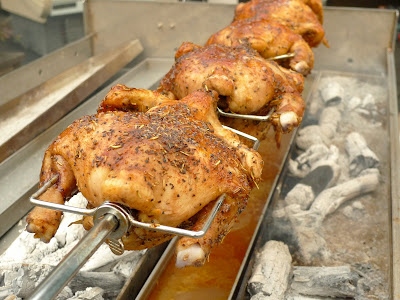 The sight of chicken grilling over charcoals on a rotating spit at the entrance was a good sign. The Whole Chicken with Stuffing ($28.90) was very tender...even the breast meat was tender. Most of the fat had dripped away, leaving behind a thin and semi-crisp skin marinated with herbs. I think the addition of a pricked orange into the chicken cavity while roasting would have given it an interesting slight citrusy flavour. Learnt this from watching Jamie Oliver and have been doing it at home.

The stuffing inside was pretty good. Mushrooms, onions etc. Way better than most Christmas turkey stuffing!

Psst...only 6 birds are available on Fridays and Saturdays. 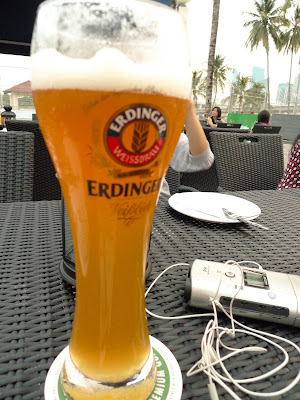 In Singapore's humidity and heat, a cool 500ml glass of Erdinger Weissbier was a God send.

And while the sun set, darkness shrouded the al fresco dining area which had no electrical lighting. Hence, after many moons of not using flash, I had to summon the rusty skills and used flash with a namecard in front to reduce its intensity. First time featuring food photos taken with shielded flash from my LX3. 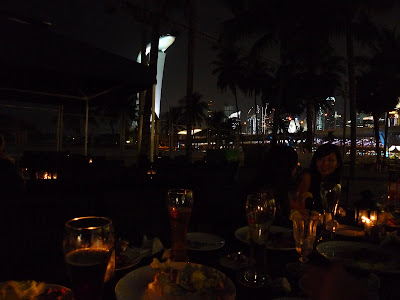 Here's a photo taken without flash. Rather dark but cozy and romantic with the backdrop of the night skyline. Hell for taking photos though. 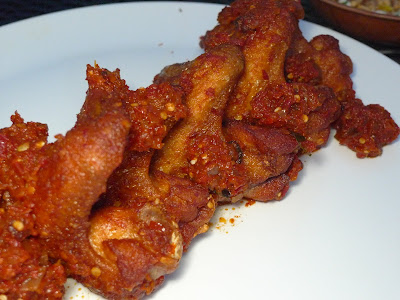 Anyway, the Hot & Spicy Wings ($13.90) arrived. There were three levels of spiciness. I tried levels one and three. Level one was pretty mild and I would think most Singaporeans would take to this without breaking into much of a sweat. Level 3 packed more heat especially at the back of the throat a few seconds after swallowing. But as the top most level, I felt it could have been really spiced up... a lot. Btw, the chilli here tasted rather Asian with a freshly-ground flavour that brought to mind Nasi Pandang. Really felt like having some rice then. 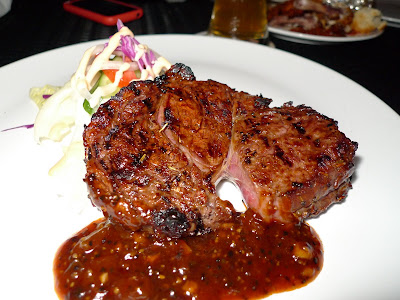 The Classic Ribeye Steak ($26.90) had a nice bite and texture. As sort of a purist, I'll prefer my steak with classic salt and pepper. But the sauce was interesting with a sweet (think Terriyaki sauce) glaze and chopped rosemary. 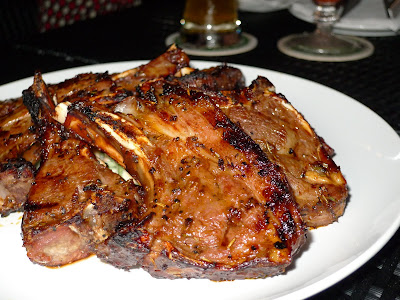 The Sage Lamb Rack ($29.90) was excellent! The meat was juicy with tasty bits of fat and without any overpowering gamey-ness. The marinade was also just right to allow the natural flavours to the lamb to shine. 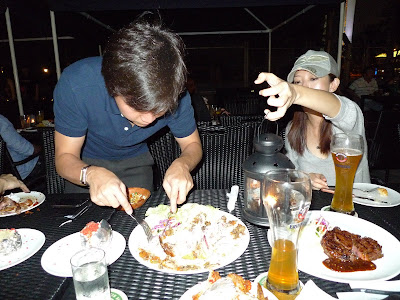 To literally shed light on how to eat steak in the dark, here's a winner. Candle light power! 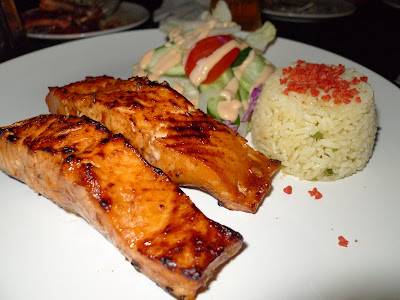 Lastly, we had the Pacific Salmon ($22.90). It was very well done with the middle still raw with a sashimi bite. The outer surface had a lovely grilled aroma. 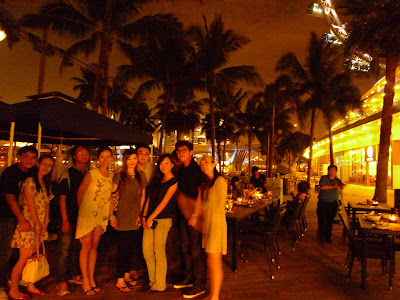 Talking about grilled....no, the Fryer Flyer is not on fire. Heh. 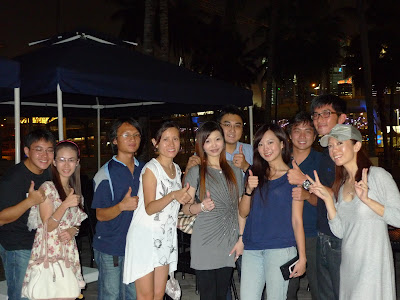 Prices are reasonable and the setting with a live band makes it great for chilling out. With the nearby waters of the Singapore river bringing a cool breeze and the lights of the city landscape iluminating the dark skies, it was all quite romantic la.

Thanks to DJs Jiafa and Weibin for having me at 美食鉴定团 and to the staff of Admiral Bar & Grill who graciously hosted us one night before their opening. Nice seeing DJ Peifen there too.

FYI, Admiral Bar & Grill used to be in Sembawang and is now relocated to the Singapore Flyer. 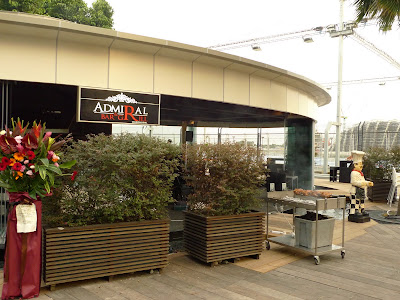 they dont sell the birds cut up?

tootall: Didn't notice any cut up birds on the menu. But you might want to call to enquire. :)

I was listening to Yes 933 and it seems that you guys were having a great time! The food there already sounds delicious over the air.

Are there any numbers for reservations?

Slurp: Haha. But food still tastes better through the mouth! ;)

Thanks! Went there last thursday. The spicy wings were GREAT! My friend drank 3 cups of water for 1 wing. The eating place was too dark for me to see my food tho.. :) Overall, people there were nice and 3 of us spent $70! :D

Eunice: Cool! Yea, dark dark and lomantic. Moohaha. Try the roast chicken the next round!