I really believe Austrian (yes, it's not a typo for Australian) wines are up and coming here in Singapore. Thanks to events like the Austrian Wine Festival, hopefully more people would know of Austrian wines and try them! A short introduction by Austrian wine evangelist, Michael Thurner of Austria's Fine Brands kicked things off. Check out the traditional leather outfit. Apparently it's never washed and can last a lifetime. Who needs cotton, no?

On to the food! 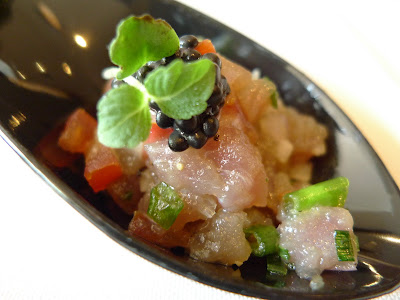 The first dish was a canapes of Tuna with Avruga Roe by Bistro Soori. Fish and roe means a slight fishy flavour but it was balanced nicely with the spring onions and diced tomatoes. 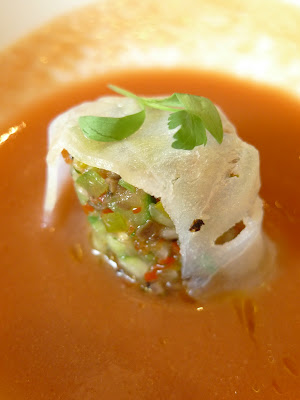 Next came the Gazpacho Andaluz by Bodega Y Tapas. Personally, I would have preferred the gazpacho (sort of tomato soup) to be either chilled or hot. Room temperature didn't quite do it for me. But flavour-wise, it was an interesting dish. 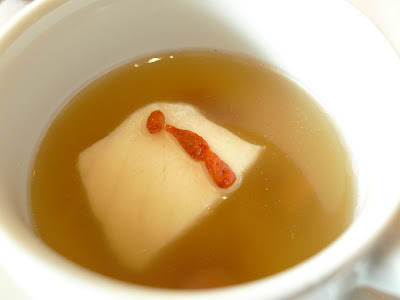 From Golden Peony came the Steamed Cod Fish in Chinese Herbal Broth. Oh how I loved this! Very nourishing and comforting. 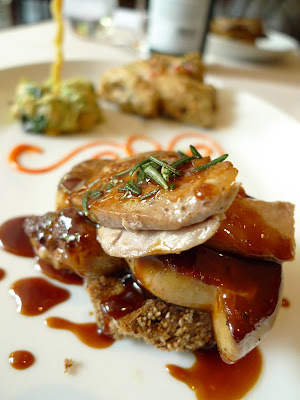 In the foreground of the above photo is Foie Gras Topped with Pan-Seared Quail Breast served on Walnut & Fig Bread and Sauced with Port Wine Brown Sauce Reduction from Angelo's. That's a long way of saying delicious. Smooth and soft, the foie gras' flavour paired nicely with the chopped rosemary and substantial-tasting brown sauce. All sweet, salty and savoury!

In the background of the above same photo is the Mustard Chilly Infused Spatchcock, Chargrilled in Tandoor with Avocado Garbanzo Chat by Song of India. The spatchcock was tender and flavourful with an alluring smokey aroma. Very refined and contemporary touch to Indian flavours.

For a clear shot of this dish, head to Camemberu's post on this same event. Coincidentally, we took clearer shots of different side of this plate. Lol. 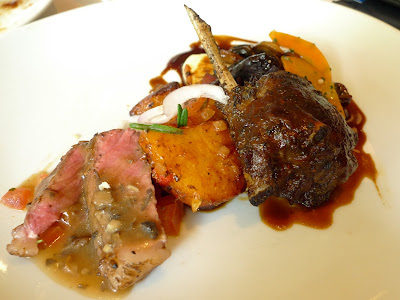 This plate consisted of (from left to right) Charcoal Grilled Angus Sirloin by The Steakhouse, Grilled Lamb Cutlets with Greek Potatoes & Rosemary Sauce by Esmirada Group of Restaurants, and Beef Bourguignon by Brasserie WOLF.

My favourite of these 3 was the Beef Bourguignon- hearty and with layers of flavours! The lamb cutlet was also good with a meaty texture and slight fragrance of the lamb. Having liked the meat at The Steakhouse at a previous dinner, I was disappointed with the steak served here. Felt like it was a rush job. 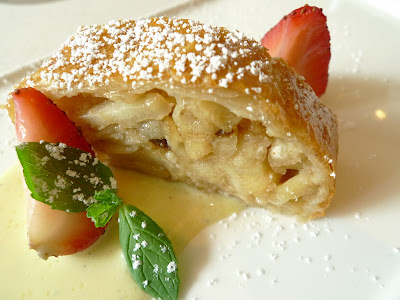 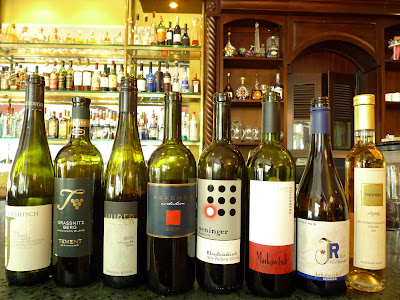 Here is the lineup of Austrian wines we had:

My personal take on the featured Austrian wines is that they are very versatile with food. Their fresh acidity and clean minerality is perfect for food pairing. I particularly like the Jurtschitsch Gruner Veltliner 2008 (try it with Chinese stir-fries and even spicy food!), Tement Sauvignon Blanc 2008 (beautifully crisp and balanced) and from the reds- the biggish and bold Arachon T.FX.T 2006 and the elegant and nicely-structured Weninger Blaufrankisch "Alte Reben" 2006. 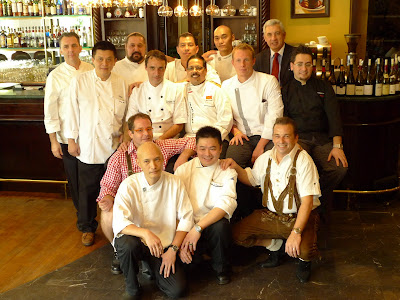 These are heroes who toiled over hot stoves so that we could have lunch. Thank you, Chefs! It's a pretty amazing feat to gather some of the most established chefs in Singapore under one roof. Partnering restaurants include the likes of Les Amis, Fifty Three, Song of India, Brasserie WOLF, Esmirada, Golden Peony, Angelo's, Bodega Y Tapas among others.

For more info on participating restaurants and Austrian wine-food pairing dinners, check out their facebook page. Over 60 Austrian wines from more than 20 premium wineries will be featured! Vinophiles, catch this before it's gone!

Thanks to Sixth Sense Communications for this Austrian wine experience. 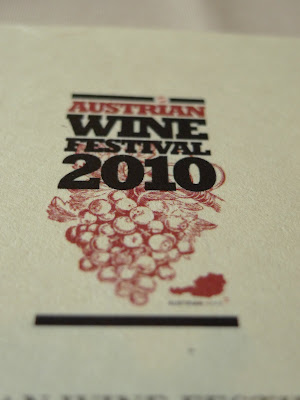 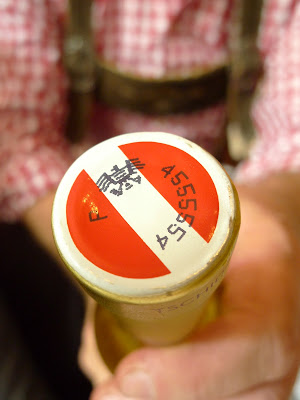 This is a sign of Austrian accountability. Each bottle with this insignia can be traced back to its exact vintage, vineyard and wine-making process.
Posted by The Hungry Cow at 9:50 am

The Gazpacho Andaluz looks like it has a face on it. (: