There are many places that I have been wanting to try but somehow dining there does not happen. Yet Con is one such place...until now.

Thanks to Shilin who pushed for this place for dinner one Friday evening. It was swarmed with people and we had to queue for a bit. 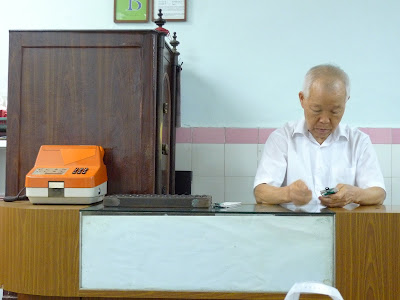 But while queuing, I did a quick scan of the place and liked it already. It oozed old school charm which contrasted with the many pubs, cafes and restaurants along the same street.

And hey, I think I haven't seen that orange coin phone in a looong time!

Here's what we ate: 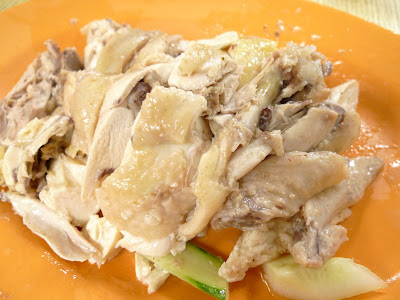 Hainanese Chicken. The skin is a little rough and the meat is a little tougher than the usual poached chicken found at most chicken rice stalls. But it was also more flavourful....not from the soy sauce and sesame oil dressing usually splashed over chicken. In fact, there wasn't any of that sauce. The chicken meat itself contained enough flavour. 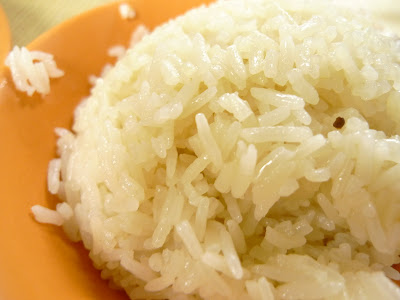 The Chicken Rice was also rather different from most other stalls. Instead of a heavy aroma of garlic and pandan, the rice here was flavoured with chicken fat and shallot oil. Tasty without being overly oily. 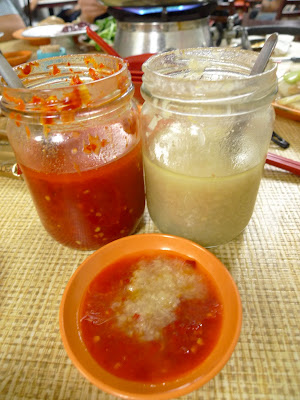 The Chilli Sauce and Garlic were rather gentle. Nothing too sharp or spicy. This I felt complemented the flavours of the chicken and rice rather than overpowering it. 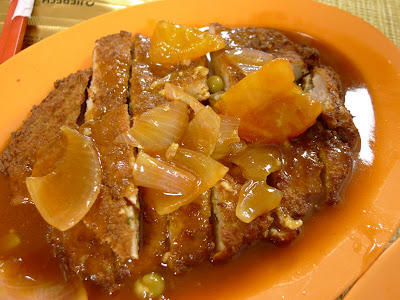 Another dish that is a must-try here is the Hainanese Pork Chop! Pork fillets coated with cream cracker (I think) crumbs and deep fried, reminded me of my paternal grandma. A sauce of tomatoes and onions with flavours of ketchup, HP sauce and Worcestershire sauce was redolent of colonial times when Hainanese chefs cooked western food for the British. Sweet, sour, savoury and a taste of true Singaporean fusion food. 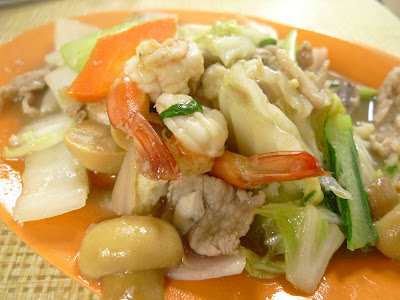 Lastly, we also had the Chap Cai. It was a medley of chopped vegetables, seafood and pork slices. The slightly starchy sauce was deliciously flavoured by these ingredients. 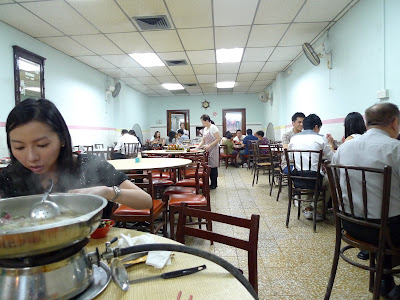 As the chicken got sold out towards the later part of the night, the crowd thinned. The next time I will try their steamboat!

The chicken rice here is very different. A refreshing change from the tender, smooth-skinned versions out there. With Yet Con's added dose of rustic appeal, this is certainly one chicken rice place in my books. 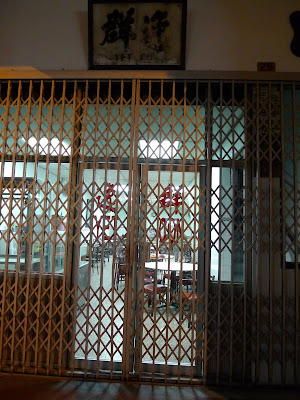 Chew On This: Most of the "Hainanese" Chicken Rice here are actually Cantonese variations. Young birds are used for their tender flesh and cooked in a stock before being dipped into iced water. Lashings of soy sauce and sesame oil are then splashed over the chopped chicken. Apparently, true blue Hainanese-style Chicken Rice uses older birds for their higher fat content and better flavour. The Hainanese like their chicken tougher and also do not pour any sauce over it or display the cooked chickens by hanging them.
Posted by The Hungry Cow at 12:05 am

Oh you finally got to try Yet Con! I totally love their pork chop. And that's a very interesting fact you have there about the preparations of the chicken.

Oh they say the Hainanese leave the chickens lying down on the plate so the oils & chicken juices will be not be drained from the chicken. Hanging them drains out all these flavors.

I know the cow loves horfun. (: Have you tried Yet Con's seafood horfun? Heard it's pretty good! I'm getting hungry...

too bad for Andy man.. gotta try the steamboat the nxt time round.

i still hear the porkchop calling for me. ^^

alkanphel: Good to hear from another Yet Con pork chop fan! Fried breaded pork with that sauce rocks my boat.

ice: U're right. Heard that from friends too. Thanks for bringing it up! Haven tried their hor fun and many of their other dishes yet....need to make a mental note to make more trips down!

Oh yes, I'm a Hainanese. My grandma used old mother hens for her chicken rice. We kids used to complain about how tough the meat was but she said that it was more tasty.

used to go yet con quite a bit, but personally didnt go for the chicken rice as it was very tough ... and cold ...

i do like the pork chops and chap chai ... which is very traditionally hainanese

i also like the stir fried beef with kai lan ...

only thing i didnt like was the grumpy faces when u pay :( at the legendary pay counter!

very old school right! i love this place, and i love the pork chop rice too! the orange telephone and the hainanese uncle makes the whole eating place very different :D

Ian Low: And I thought grumpy faces was only when people don't pay! Lol. Ooo... stir fried beef and kai lan is one of my favourite homecooked dishes.

Miss Tam Chiak: Yea lor! I like the old school charm. Places like this should be preserved as part of national heritage!

seems some of locals like u loved to eat chicken rice ?? i have tried local hainanese chicken rice and , laksa, satay bee hoon ...

seems some of locals like u loved to eat chicken rice ?? i have tried local hainanese chicken rice and , laksa, satay bee hoon ...

just sharing so u should give ur supporter like Free makan leh ... just kidding.. . Really nice foods & price reasonable .. This is personal review , makan lovers should try it and have own review ..


if happen that the owner saw my post can claim 1plate ?? haha .

Anyone tried the steamboat there before? Any comments? :)

Eunice: I'm curious too! Think must go and try one of these days.

I'll try it and let you guys know!

Just had the steamboat, waiting time is 30mins. But the food arrived quite fast though. We ordered chicken, chap chai and steamboat. Total bill is $70 for 5 people. Not very expensive.. Try to go after 8pm if you do not want to queue!

Eunice: Thanks for the heads up! Will certainly check out their steamboat the next round. :)