Big Bowl of Wanton Mee for Me

While bigger is not always better, this upsized bowl of wanton mee is. 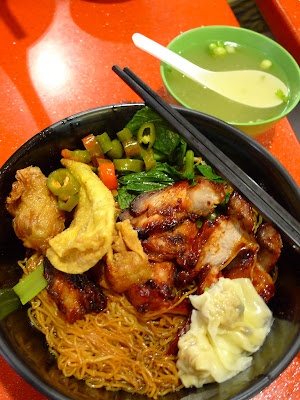 The Wanton Mee ($3.50 for large size) came with a good portion of noodles topped with a generous list of ingredients: two boiled wantons, one fried wanton, fried meat dumplings, blanched chye sim and char siew. The noodles had a softer texture though they were not mushy. I like the dark sauce, oil and chilli mix that came together very nicely.

But the star for me was the char siew. No bright red/pink slices masquerading as the real stuff. The char siew at this stall was relatively lean but with small fatty bits that added flavour. The outer surface was beautifully caramelised with charred edges that gave a smokey appeal against the sweet marinade and the flavour of the pork. 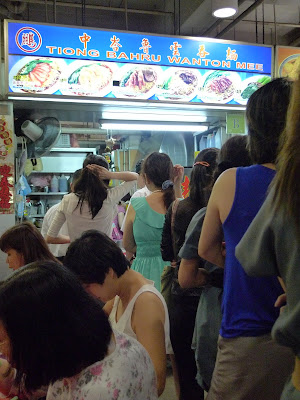 Chew On This: As this stall is located in the CBD and lunch time brings quite a crowd, remember to beat the rest who use boring packets of tissue, umbrellas (and even an iPhone cover!) by bringing a shawl or sari to chope seats for the whole lunch bunch! Moohahaha.
Posted by The Hungry Cow at 12:59 pm

That is new. iPhone covers. LOL