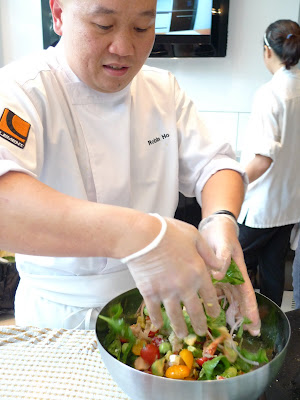 I first met Chef Robin Ho, Group Executive Chef of The Marmalade Group, when he was involved in Lim Chee Guan's opening at ION Orchard. There he made a very simple and delicious half-boiled egg topped with chopped bak kwa.

And so it was with excitement that I accepted the invitation to his cooking demo held at La Galerie De Dietrich.

First up some words from our sponsors: 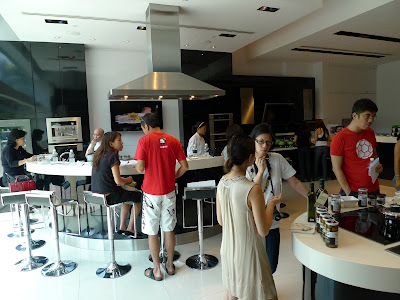 La Galerie De Dietrich is a beautiful showroom showcasing De Dietrich's range of kitchen appliances from fridges to wine cellars, ovens, espresso machines and induction hobs. With a cooking demonstration area, it was a perfect spot to host their customers and show them the practical functions of their equipment. 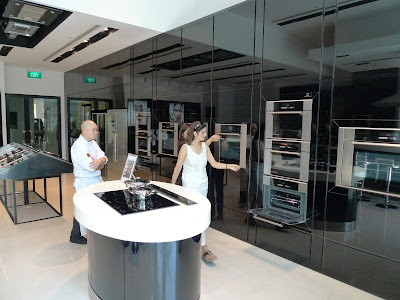 De Dietrich- quality, design, innovation and performance. I like their sleek, minimalist touch. When I get my own home.... 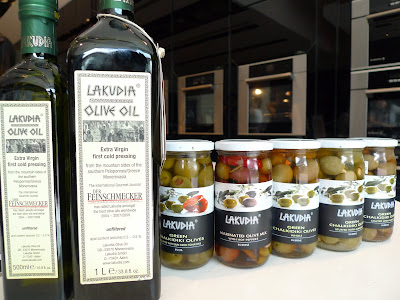 The Lakudia range of extra virgin olive oil and olives from Greece is a good stash for any larder. Think olive oil is just for bread/salad, or olives are only good as antipasto or in martinis? Chef Robin's three courses will prove otherwise. 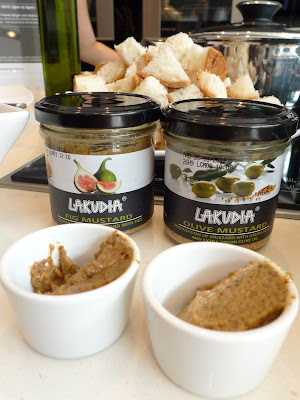 I like this pair of mustard. The Fig Mustard had a nice natural sweetness while the Olive Mustard packed a more savoury, briny note. I would spread some in a ham sandwich or slather sparingly over pork chops and sausages. In fact, these mustard would be prefect with Chinese-style crispy roast chicken!

And now we resume to the cooking demo: 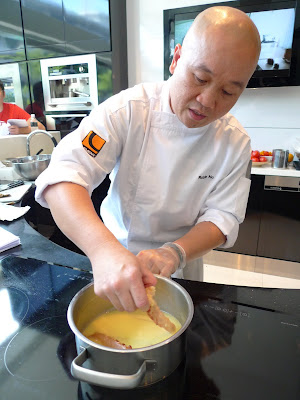 For the first course, Chef Robin poached lobster tails in melted butter at 58°C. This would apparently retain the flavour and juices of the lobster. The cooked lobster tails were then sliced and tossed together with baby spinach, feta cheese, avocado, red onions, tomatoes, fennel, cucumber and croutons. Throw in Lakudia kalamanta olives for an added dimension of flavour! These were dressed in a concoction of Lakudia extra virgin olive oil, red wine vinegar, fresh dill, Italian parsley and salt. 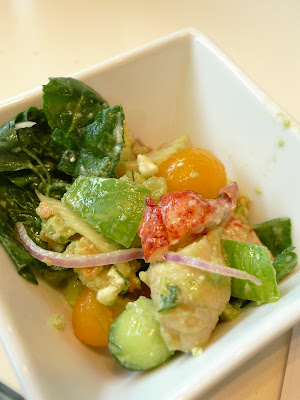 I enjoyed this Lobster Greek Salad with Fennel Lakudia Olives tremendously. The fresh flavours and varying textures made this more than just a bowl of greens. :) Did I mention it was frozen lobster tails? Chef Robin said: "It is how you treat the product that is important." And for making frozen seafood so tasty and unfrozen-like, I give a rating of five thousand freaking chopsticks! My first rating ever. Moohehehe. 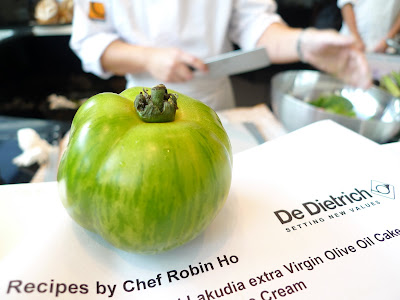 Oh and I should not forget to mention that Chef Robin threw in a couple of tomatillos (or what he calls "green zebras") in there! Beautiful sweet-tart flavour. 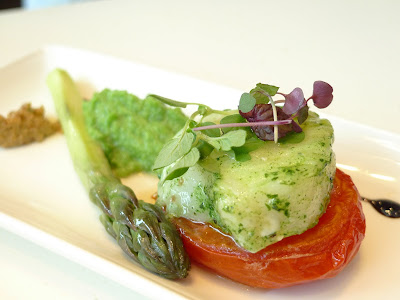 Course number two was Slow Cooked Chilean Seabass with Parsley Olive Oil Dukkah Spice, Mushy Peas and Semi-Dried Tomatoes, Lakudia Olive Mustard. The fish aka Cod was cooked in an oven at low temperature over a relatively longer period of time. This made its oily flesh succulent and nicely firm. The asparagus was steamed in a steam oven (Wah, I usually use a pot of boiling water with a steamer platform or more recently an electric steamer, but a De Dietrich steam oven made it super cool.) for a quick 5 minutes before being seared on a hot skillet. My favourite part of the dish- mushy peas!

Eeks! I can't believe I just said peas were my favourite part of a dish. I am a green-pea-hater. But this mushy peas thingy was just yummilicious!! Frozen peas cooked in chicken stock, butter and thyme and blitzed to a mushy, paste-y, semi-creamy consistency. It neither sounds nor looks good but tasting is believing. 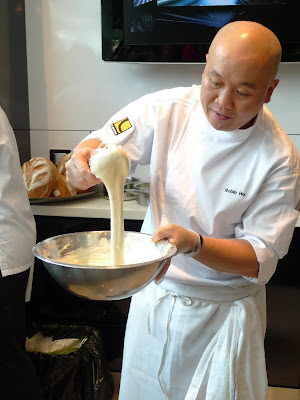 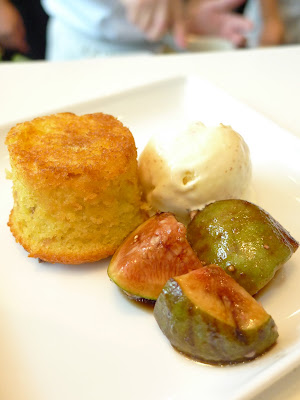 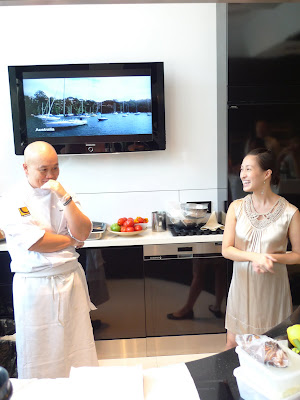 I don't know what they're thinking of but I would be most happy to experience this olive magic all over again!

Thanks to Ivy of Food News for the invitation and to De Dietrich for having me.

Chew On It: Stand to win a pair of De Dietrich cooking demo tickets! These demos take place both on weekdays and Saturdays and involve a number of chefs including Julien Bompard, Edward Voon, Milind Sovani, Pang Kok Keong, Diego Chiarini and Yong Bing Ngen among others.

All you have to do is post a comment stating one kitchen appliance that De Dietrich offers, by next Friday (13th August) midnight! Don't forget to leave behind your email address too. I will randomly select a winner via an online random number generator. Good luck! :)

Update: The online random number generator has selected '3' which means ye_pei_yan@hotmail.com wins the pair of De Dietrich cooking demo tickets! Congrats. Thank you all for participating and for those who did not win, maybe the next time you'll be next! :D
Posted by The Hungry Cow at 12:46 am

Steam oven! :P (just kidding, no need to put me in the random draw)

Hahaha, I love green peas - except mushy ones, but the way he cooked it sounds delicious. So many interesting things in this session.

All: Congrats to ye_pei_yan@hotmail.com for winning the pair of tickets! We'll be in touch.

Have a great week ahead everyone!