Life is unpredictable. A few foodies gathered one morning for kway chap only to find the stall closed with its owner apparently on holiday. A separate visit a few days later when I met another group of friends for a trek from near-by Bukit Chandu also ended up kway chap-less.

Looks like this kway chap is proving to be a little elusive. 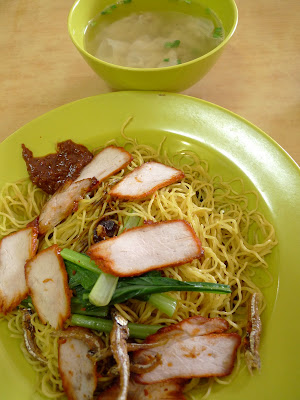 Anyway, in the same kopitiam is a Wanton Mee stall. I had this on two occasions and found that this noodle dish here is best eaten immediately. It is unfortunately less forgiving of trigger-happy bloggers who take time to shoot. 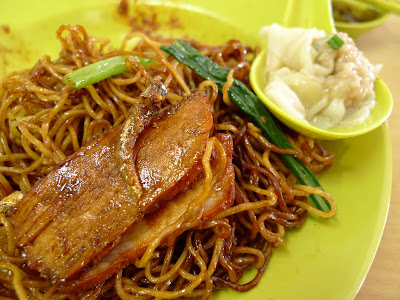 While I found the char siew to be too lean and dry, what hit the spot for me was the springy, almost wire-like egg noodles tossed in dark soy sauce, chilli and shallot & garlic oil. Fried ikan bilis also added texture and a very savoury touch.

With the average wantons and disappointing char siew, this might just be a wanton mee where the noodles and sauces are the star. Hey, in fact I would be happy to just get a big plate of this noodles topped with blanched cai sim and a fried egg! 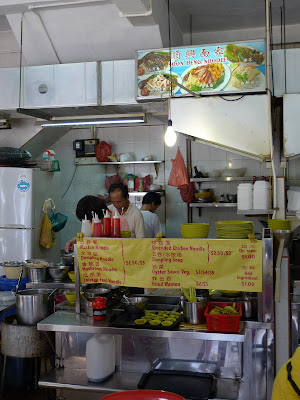 Chew On This: I happened to be wearing the Standard Chartered Marathon 2007 Finisher's Tee and apparently the uncle at this stall also took part in it and wanted to treat me to a bowl of wantons! Haha. Of course, with a trek all the way to Vivocity ahead, I politely declined.
Posted by The Hungry Cow at 12:19 pm

I hope so too man!! Else we gotta camp out there! Lol.

Any idea where this stall relocated to? It’s no longer at this coffeeshop. :(