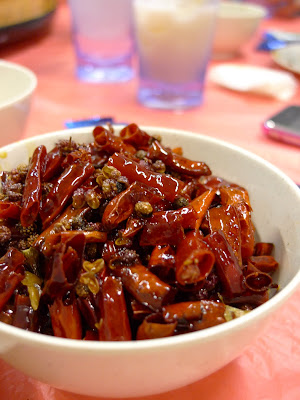 Most people think of Szechuan food as spicy as hell. Images of fiery Ma La broths with a tears-inducing chilli oil layer surfaces. It's generally chilli, chilli and more chilli.

But at a recent dinner I realised it's actually not quite that. Yes, chilli is a common ingredient in most dishes but there's more than just heat beneath all that spice. 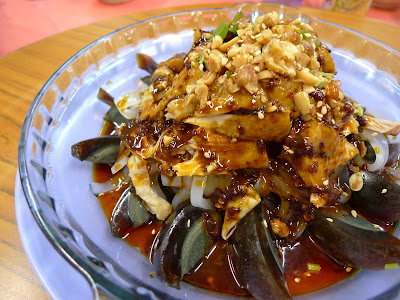 The first dish, Marinated Chicken in Sichuan Style ($9.80), turned out to be my favourite of the night. Add in wedges of century eggs and toothsome liang fen (sweet potato flour noodles; $5.80) for a nice combo! The ingredients were topped with a sauce that had heat, spice, tang and a peanut/sesame seed paste component. Szechuan peppercorns (hua jiao) gave this dish a numbing, almost menthol-like feeling. 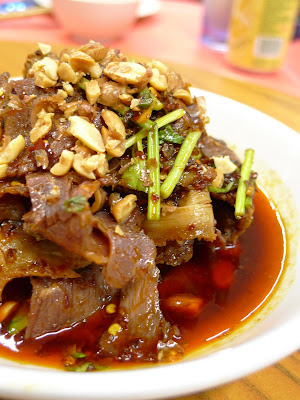 The next dish of Sliced Beef and Tripe in Chilli Sauce ($7.80) was actually slices of beef heart, lungs, shin, tripe and tongue. The two pieces I ate were flavourful and I like the chilli oil and black vinegar that coated each sliver. 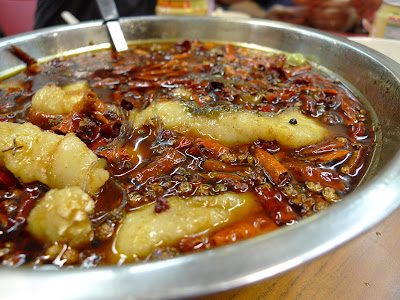 Then came the Fiery Pot of Hell Boiled Sliced Fish in Ba Yu Style Sauce ($18.80). Looks mind-crazily spicy but thankfully only the fish is eaten, leaving behind the lava liquid. The fish seemed to be coated with a cornflour slurry that made it really smooth. I enjoyed the saltiness of the fish against the spicy, numbing backdrop. 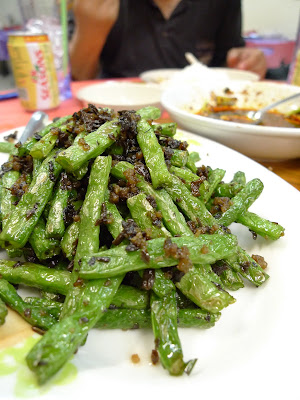 For the customary veg dish, we ordered the Fried Long Beans (sorry I forgot the price). The long beans spotted oil-blistered skins and were crunchy. Stir-fried with minced pork and Chinese bottled olive. Pretty appetising and calls for rice. 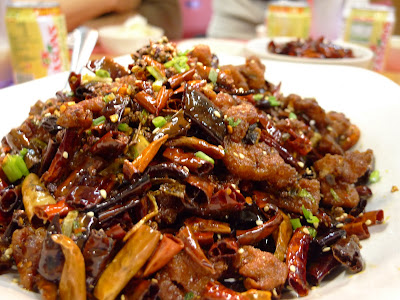 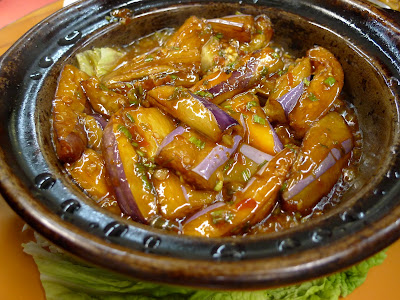 The Eggplant with Garlic Chilli Sauce (~$8) featured tender eggplant pieces in a claypot. They were sweet and sour style and by this stage, my palate was confused between spiciness and hotness (high temperature).Haha. 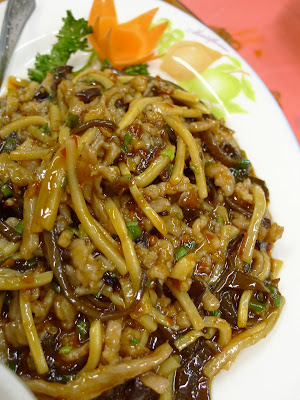 This noodle-lookalike dish was actually Shredded Pork with Minced Garlic Chilli Sauce ($13.80). The strips seemed to be what tasted like bamboo shoots. The sauce leaned towards the sourish side. Unfortunately, a little too sourish and starchy for my liking. 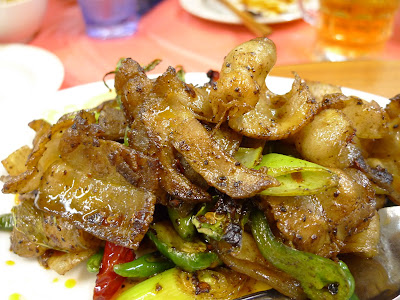 After the slew of dishes came and went, we were deliberating if to order the Hui Guo Rou ($13.80). And pork belly was hard to say no to....especially when... 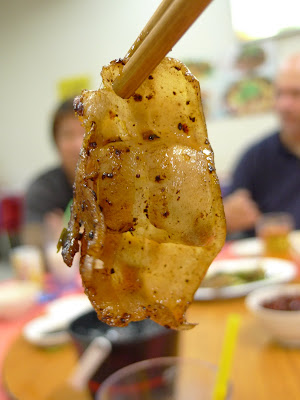 Each slice was first boiled for a few quick seconds before being fried with green chilli, red chilli and leek in a hot wok. This made it tender and at some parts, crispy. Szechuan bacon, no? One ang moh (hello Kevin!) even wanted to have this for breakfast! 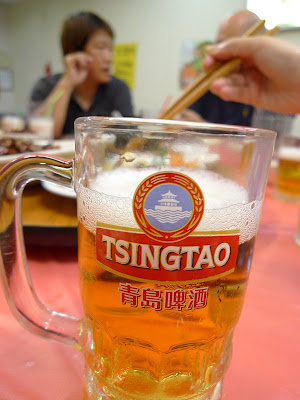 A wiseman once said: "China food, China beer." Don't ask me which wiseman but dinner was washed down with Tsingtao beer. Well-chilled, light and with a gentle sweetness, it was a good choice to the full-flavoured, spicy dishes. 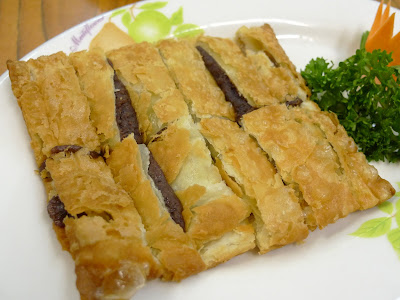 To end the meal on a sweet note, we had the Red Bean Pancake ($6.80). The flaky pastry was alright but a wee bit thick. Either that or the red bean filling could have been bumped up. Still it was a nice sweet ending to a spice-filled dinner.

The above photo courtesy of TTC.

It was a fantastic dinner with foodies and hey we left with sexier lips! Forget botox. Lol. The food here plays on the balance between sweet, sour, and spicy. With each component in balance, there was spicy harmony. 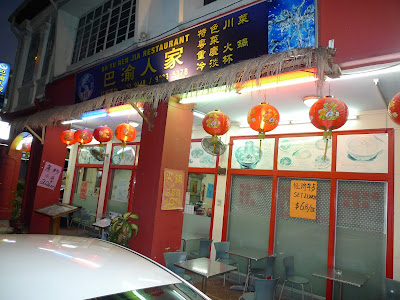 Chew On This: The spicy component of chilli is capsaicin and it does not dissolve well in water. In fact, drinking water (even if iced!) has little use to douse the fire. Instead, drink milk or yoghurt as the milk protein, casein, acts as a detergent, dislodging capsaicin from the nerve receptors.
Posted by The Hungry Cow at 2:00 pm

The red bean pancake yo!

Yixiao: After all that spice, good to end dinner on the sweet side. :)

SiHaN: Sorry for the late reply! My comments got lost when I switched to my own domain. :S And yes, that chicken dish is awesome!! :)

Hi! This is one of my favourite restaurants too! Would like to check with you if you know they closed the business or relocated? Went there 2 weeks back - they were closed and been calling them but no1 is picking up the fone.

Ashley: Hi there! The friend who introduced me to this restaurant has confirmed that it is now closed. Another unfortunate case of good food, bad business. :(