I have always read and heard about the World Gourmet Summit but have never attended any of its events due to exams schedule (both WGS & exams are in April!) and also the high cost of some of the events.

But with impending graduation and hopefully higher dispensable income, I signed up for my first WGS event- The Grandeur of Wine ($58).

Held at the Hilton Hotel on a Sunday, it attracted a steady but small stream of visitors who went from booth to booth, sampling wines and chatting with the vendors.

While the wine booths and sampling were fun, what was perhaps more educational and structured was the slew of master classes, some of which by very notable speakers. Registration for these classes was a breeze and inclusive in the $58 entry ticket!

My first master class was... 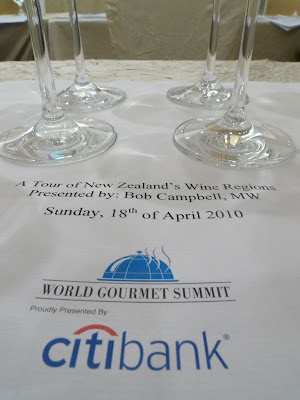 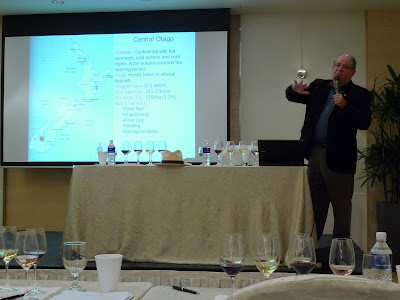 Among the eight Kiwi wines featured, my favourite was the Pegasus Bay Riesling 2008 from the Waipara region. It had a golden colour and a limey, honeyed nose. On the palatte it was luscious, sweet with minerality and chalkyness ending dry. Nice, balanced and long finish. 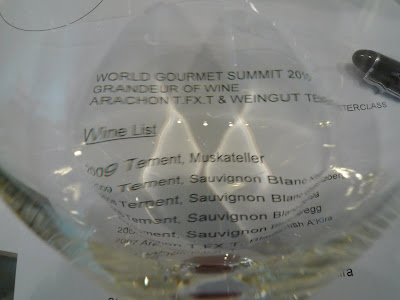 Next was the Arachon T.FX.T & Weingut Tement Masterclass with promeninet local wine connoissuer, Dr N.K. Yong, as the moderator. This session was interesting as it provided a window into Austrian wines- not very well-known here but certainly up and coming. Armin Tement and Jacques Perrin guided the tasting of eight wines.

Tement is most famous for their Sauvignon Blanc and a tasting of four of these showed just why. There was a common vein of delicately expressive nose, mineral-rich body and a certain clean characteristic. I particularly like the Tement Sauvignon Blanc Zieregg 2006 with its refreshing acidity and more mature, nutty and earthy notes.

Among the Arachon wines featured, the Arachon T.FX.T 2007 stood out- a big full-bodied red with spices, vanilla and wood on the nose and biggish tanins and high acidity. Me thinks plenty of good years ahead for this one. The 2002 vintage showed a richer nose of blueberries, cheries, spices and a sweetish vanilla hint. 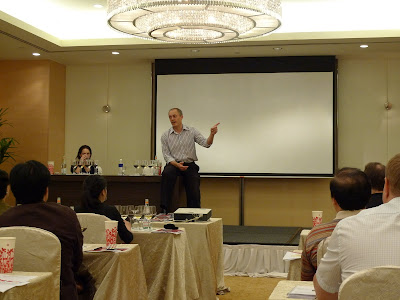 And finally, the last masterclass I attended was Classic Wines of Australia by Jeremy Oliver. Lisa Perotti Brown, the only Singapore-based MW, moderated the session. A tasting flight of eight (Think it's an auspicious number even for wines. Lol.) wines served to showcase the different wine styles from eight key regions. In the line-up were the likes of Petalima Riesling 2009 (Clare Valley), Lenton Brae Semillon Sauvignon Blanc 2009 (Margaret River), Joseph Angel Gully Shiraz 2007 (McLaren Vale) and Brown Brothers Patricia Cabernet Sauvignon 2002 (King Valley) among others.

My personal favourite was the Joseph Angel Gully Shiraz 2007. I like its boquet of cheries, plums, chocolate, licorice and concentrated fruit flavours on the palatte. One big, spicy Aussie shiraz. 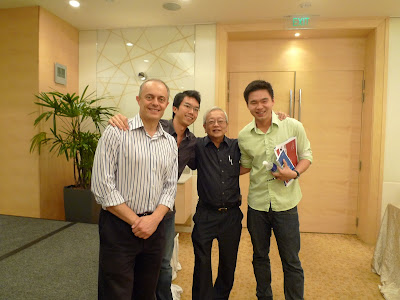 With the ending of the Aussie masterclass, it was time for a photo shot with Jeremy Oliver, alongside my friends, Dr. Zouk and Ewan.

Grandeur of Wine, I hope you'll be back next year!

agree with you on the Joseph Angel Gully. Tried it during a free wine tasting. Nice flavours , nice tannins, balanced fruit, good finish

But retailing now for 67 dollars....a bit steep for a aussie wine, i saving up for brunello !

Derrick: Brunello's not the cheapest wine around too! And it's very different from an Aussie shiraz, so I guess it boils down to what you want/prefer.