Wanting to avoid all that gimicky commercialized Mother's Day offers at most restaurants, our family decided on a small steamboat restaurant in Joo Chiat. It was air-conditioned so eating steamboat was still a comfortable affair. Most tables were families who were also probably commemorating Mother's Day.

Besides, gathering over a hot pot meal as a family is a meal with love and family warmth. There's just something about communal dining sharing a pot. 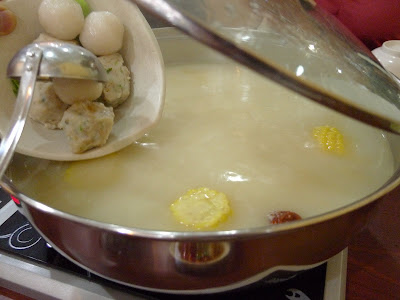 The soup stock was simple but tasty- fish bones and I'm guessing either pork or chicken bones. 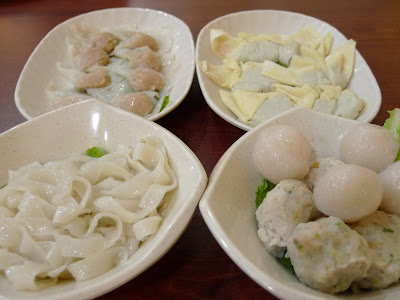 The Fish Kway Teow ($5; foreground left) was interesting. When cooked, it had a slightly floury bite and tasted like fish paste with salt. The Fish Ball and Pork Ball Combo ($6; foreground right) was good to taste both without ordering a full portion of each type. Sadly, I found the fish ball to be average while the pork ball had the distinct taste of Chinese parsley (which I personally do not like). This Chinese parsley taste was also found in the Wanton ($5; background right). What was really good was the Meat Dumpling ($5; background left). The skin had a slightly resilient bite (similar to the Fish Kway Teow actually) and the pork filling was tasty. 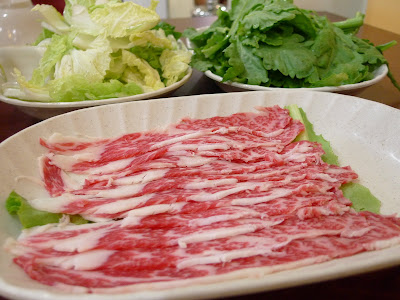 For meats, I enjoyed the Fatty Beef ($10) which was streaked with fats and ultra tender with a sweet, gentle beefy taste. A little goes a long way. We also had two veggies- Bai Cai ($4; background left) and Tang Oh ($4; background right). 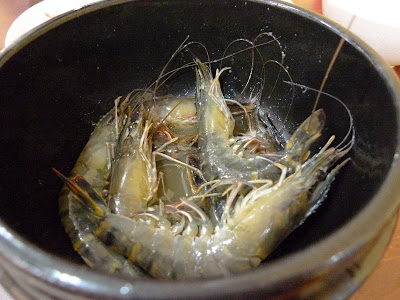 Live Prawns ($12 for 200g) was also available. They are served covered to prevent the crustaceans from committing suicide. 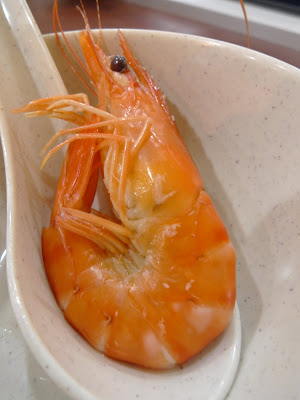 But their death contributed to the sweetness of the soup and made for good eats! Each prawn was medium-sized and was sweet with a nice natural, springy bite. 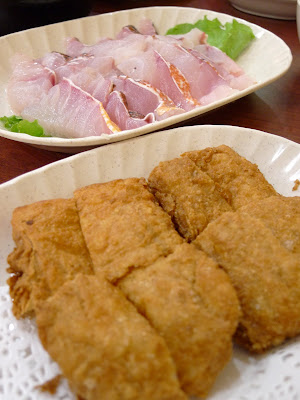 A special item was the Fried Dou Gen ($4; foreground). Essentially beancurd sheets that had been folded and fried, these were dipped into the boiling soup for a few seconds. The quick dip rendered a contrast in texture- crispy and spongy. The Red Grouper ($25; background) was fresh and firm.

It was a healthy, satisfying and affordable dinner. :) 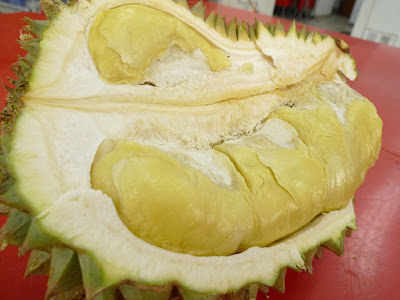 Then we headed to near-by Four Season's Cafe for dessert. Twas not the season for durians. Alas. With the money spent on lousy durians, we could have ordered the Chinese Pomfret plus a few more side dishes....but life is not about regrets....it's about looking forward. This place serves cze char dishes. 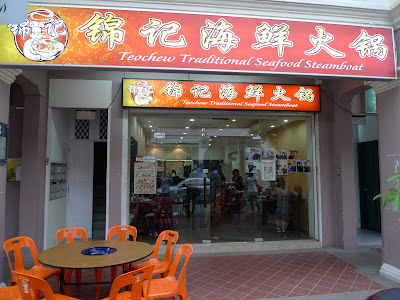 Chew On This: No service charge and GST! Woo!
Posted by The Hungry Cow at 4:34 pm

Aiyo, I would have make the death of the prawns more pleasurable for them drowning in a pool of Meiguilu (Rose dew wine) or Brandy!

The durians at Four Season's Cafe are never fantastic, be it durian season or not.

TTC: Oh yes! Thanks for the reminder. There acutally was Chinese wine in the bowl to drown them but not sure if it was Meigiulu. Nonetheless, they still died deliciously! Hehe.

Anonymous: It was my first time trying them. My general exprience is off-season, one has to pay more for relatively lesser quality. When it is in season, the higher supply often means better quality at each price point.