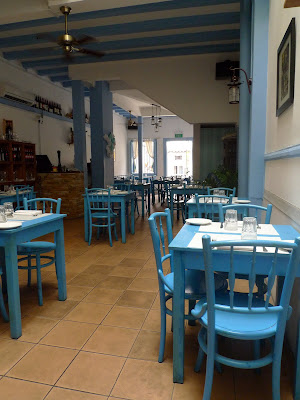 A simple birthday lunch over pastas and pizzas with the family happened at Cugini last Sunday. 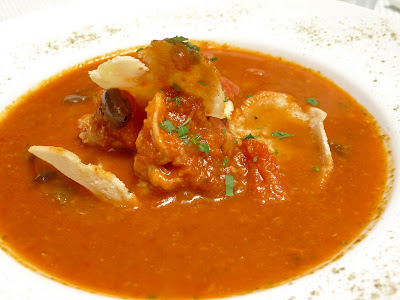 Hungry mum ordered a Zupetta di pesce alla Siracusana ($15.90) first while the rest of us browsed the menu. I took a spoonful of the Sicilian-style seafood soup and immediately like the fresh, sweetness of tomato and seafood flavour. If only there was bread with this...

We shared 2 pastas and 2 pizzas. 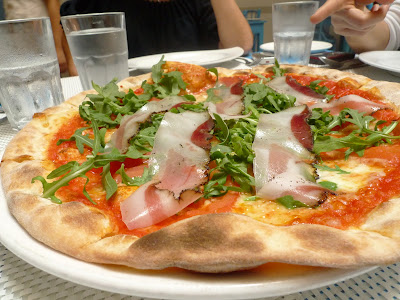 The Cugini($24.90) spotted five thin slices of Italian bacon that was heavily streaked in fat. The gentle melting of the fat by the heat of the pizza brought forth some of the cured meat's flavour- intense, salty, and slightly nutty. 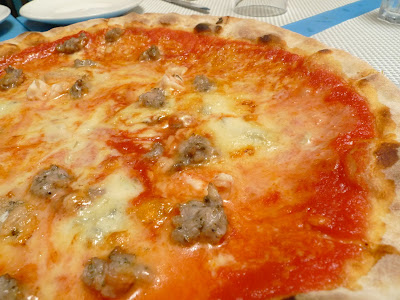 For fans of gorgonzola, the Club 87 ($24.90) would appeal with its stinky personality that I find alluring. Small round balls of Italian sausage (without casing), and shrimps dotted the pizza.

Generally, I found both pizzas to be a little too wet, which made the crust a tad soggy. But what was really good about the pizzas was the tomato sauce with plump bits of tomatoes that tasted really sweet!

And without further ado, here comes our 2 pasta dishes. 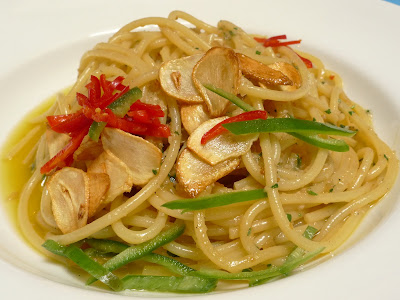 The Spaghetti aglio, olio e peperoncino alla Cugini ($16.90) was a simple spaghetti dish tossed with olive oil, thin strips of red chilli and green pepper, and thin garlic slices. Simple as it was, it was very good. The pasta had a nice, firm bite which was very much different from most other places. The spaghetti seemed a little thicker and better at holding on to the oil. The garlic slices were fried till golden brown and added a simple yet satisfying touch to the dish. 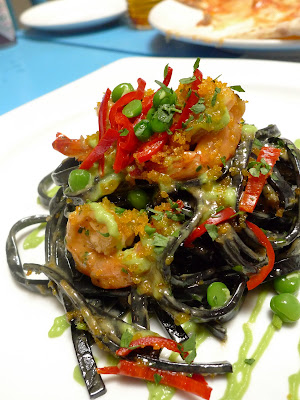 In quick succession, the Fettucine al nero allo scoglio, con piselli freschi e bottarga di muggine($22.90) arrived at the table. They usually serve this with baby squid but as they weren't available that afternoon, prawns were used as a substitute. The inky pasta was (again!) firm and had that good mouth feel. The slightly creamy sauce with mullet roe that coated each strand tasted very umami with the sweetness of the sea. 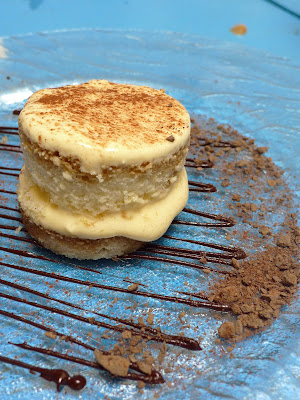 The Tiramisu con salsa di cioccolato amaro($9.90) which was a little to dry and cake-like for me. More coffee and liqueur punch would certainly add more weight. 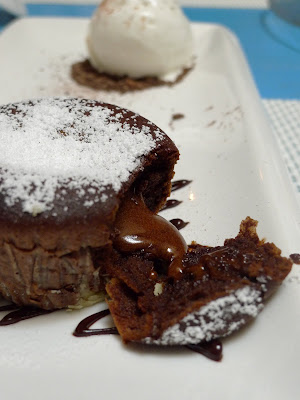 The Tortino caldo di cioccolato con gelato alla vaniglia ($15.90) also failed to excite me. The chocolate seemed a little weak and one-dimensional. The shavings of chocolate were a nice touch to the otherwise, very plain vanilla ice cream. 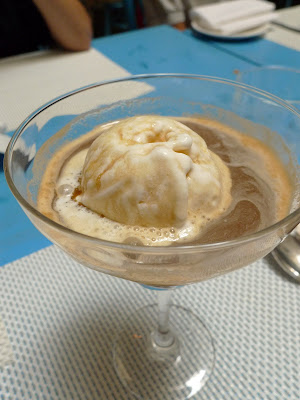 Thankfully, on a day when the usually dependable choices failed, the Affogato ($13.90) prevailed! The hot liquid of espresso and rum was a potent force to engulf the vanilla ice cream. Strong, sweet, bitter and smooth. Yums.

It was a great Sunday. :D 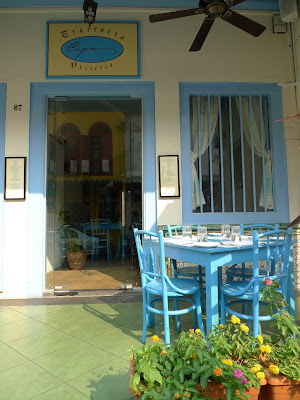 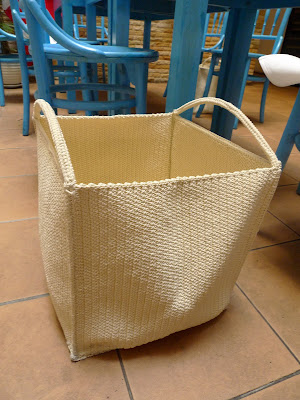 You do not have to be carrying a Birkin to get a nice bag holder to keep your bag off the floor and clean!
Posted by The Hungry Cow at 11:28 pm

been wanting to try this place for a long time now....
your post just added more reasons to try it out
jeff
www.gourmandtales.wordpress.com

jeff: Thanks and happy Cugini-ing!

Haven't been to Cugini for a while...love the squid ink pasta there!

liverpool1965: It was my first visit there and I fell in love with the pastas. Yes, squid ink's good! :D

will be heading there hopfully soon... looks good

Singaporefoodlover: Hope you like it! I feel the pastas there are the focus. :)