For today's Foodie Lunch Pick on 938LIVE, I'll like to feature the Mee Bakso and Prawn Mee from Misa Bedok Corner stall.

After last week's absolutely memorable Kacang Phool at Mamu Kitchen, I was back for more. Unfortunately, many stalls, including Mamu Kitchen, were closed when I visited. Perhaps it was an extended break from the Deepavali weekend.

Anyway, I got to try Kacang Phool from another stall but it was unremarkable. Alas. I turned to another Muslim stall and ordered Mee Bakso and Prawn Mee. 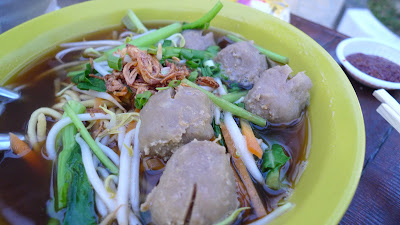 Mee Bakso ($3.50) is a dish of yellow egg noodles in a broth with beef balls. I think it's an Indonesian dish but with the inter-relatedness and close proximity of south-east Asian countries, let's not go to the stage of nationalising dishes.

The broth here is kept light but I would prefer a more robust one. I like the crunch of the green vegetables and bean sprouts. It breaks the monotony of egg noodles. The beef balls were very tasty with a soft chewy bite and with a flavour of beef and white pepper. 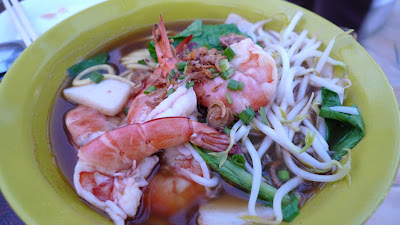 The Prawn Mee ($3.50) had a soup that was rather different from the usual. Instead of pork bones, I think beef was used. In fact this soup was a tad similar to the Mee Bakso's broth. Except that it had the added flavour of prawn shells. But what really impressed me here were the four de-veined prawns- sizable, very sweet and with a great texture!

Maybe the next time I'll order a bowl of soup with just prawns and beef balls. 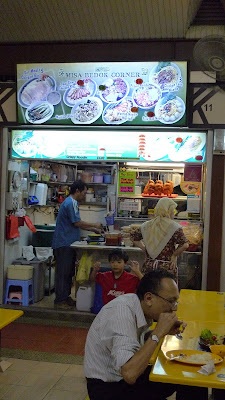 Chew On This: For other halal delights, this stall also serves up Mui Fan and even Chicken Feet noodles!
Posted by The Hungry Cow at 12:12 am