With the arrival of evening and the winding down of shops and wineries (too early!!), we checked out a supermarket in Margaret River town to replenish stocks of bottled water.

But what caught our eyes were the fresh-looking cuts of beef and chicken and fish and vegetables and huge potatoes!! Prices for the beef and chicken were rediculous by Singapore's standards. 12 chilled drumsticks for AUS$7! 2 chunks of osso bucco for AUS$5! This sparked off a 'cheap! cheap!' frenzy as we showed the true Singapore essense.

Anyway, we bought our groceries to cook dinner as well as the following day's breakfast and lunch, and headed back to the Forte Leeuwin apartment. 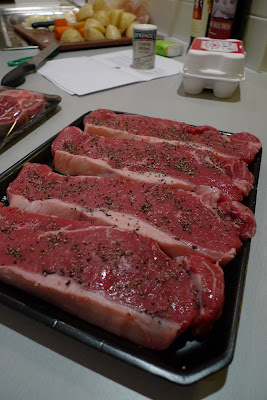 Not wasting any time, potatoes were scrubbed, pasta was cooked, salad was tossed and beef was seasoned! 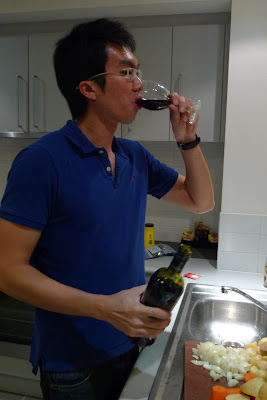 Taking a leaf from Keith Floyd, I took a quick slurp between all the dicing and frying. Never did I expect that two days from this dinner, Keith passed away. Although I haven't been a fan of his seemingly haphazard style of cooking, his shows have amused me through some lazy afternoons and late nights. Goodbye, Keith. 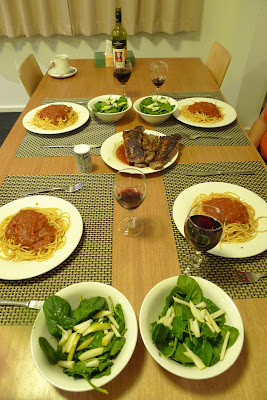 Dinner was a simple pear-and-rocket-salad, pasta marinara and steak. A Peter Lehman Grenache-Shiraz 2007 (AUS$9.90) was the night's wine.

Chew On This: Expensive items (when compared to those here in Singapore) at the supermarket include chicken breast, garlic and ginger. But still it's generally so much cheaper to cook here than to eat out! I got good advice from makankakis Alfred and Devi to cook, eat and drink in! :)
Posted by The Hungry Cow at 8:41 pm

Good to see you cooking. Just a suggestion: rub the spices into the meat (with your hands) to get more flavor. Alternative is to put them all into a bag with the spices, crush some garlic and fill the bag with olive oil. Put in the fridge for about 2hrs.

Hope you found time to get some olive oil too!

ivan: Cos I had a wonderful time! And wines there are so much cheaper.

Cooking heals the soul. Hahaha. Will rub-in the spices the next time. This one was a last-minute chop-chop dinner. :)