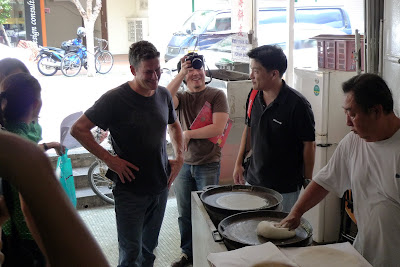 Decisions in life are not always easy. Choosing one option will most often mean losing the other. Losing an opportunity versus opportunity cost incurred. So it was with this thought in mind that I decided to accept the invitation to join Bob Blumer on a makan tour, foregoing the 2nd halve of class of a one week intensive course.

It's not like everyday that I get the chance to meet Bob Blumer or a prominent Sunday Times food journalist (it wasn't WAY). So yes, Prof Chia I am sorry to have to miss your afternoon session and it may cost me points but here's an opportunity that I find hard to give up.

Moo-ving along to the tour. 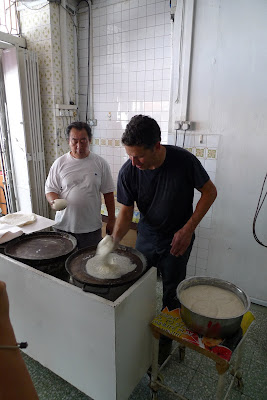 The first stop was at Popiah specialist Kway Guan Huat (95 Joo Chiat). Here Bob was introduced to Popiah- the local spring roll dish that has a filling of shrimps, stewed turnip, Chinese sausage, egg etc wrapped in a thin flour skin. Bob was invited coerced to try his hand at making the Popiah skin. Under the guidance and watchful eyes of the barefooted master, Bob seems to have gotten the hang of this! 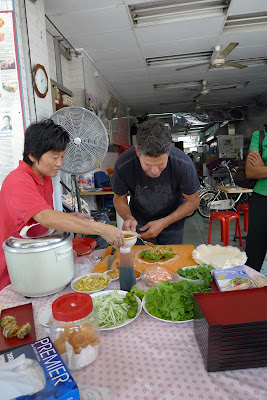 It didn't take much before Bob fell in love with Popiah. It was, in his own words, "An explosion of flavours. Very fresh and sweet." 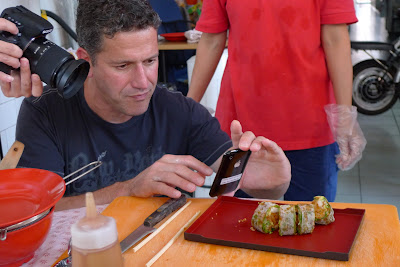 Oh yes, add Bob to the PopiahRocksMyBoat group on Facebook. He was so into Popiah that he took a quick photo and tweetered it. Bob mentioned he was even willing to pay $10 for it. Popular local blogger, Mr Miyagi, who was also present retorted "Ang Mo always push prices up!". Lol.

Me thinks Bob will secretly open a chain of Popiah cafes in his homeland, Canada. Brilliant!! 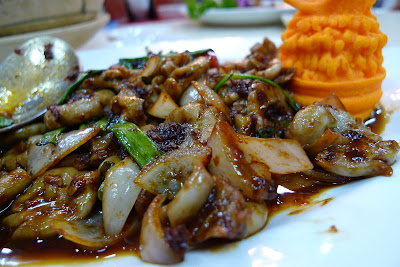 The next stop was at Old Mother Hen (136 Sims Ave) for Kung Pao Fallopian Tube! Sounds funky but it was really all in the mind. Once you've overcomed the fact that you're eating a piggy's fallopian tube, its all about the texture. Personally, I thought its texture bore a little resemblence to white fungus.

Though there to specially try this particular dish, a whole banquet of dishes including Steamed Shark, Stir-Fried Live Frogs, Claypot Rice, Kampung Chicken etc soon made their way to the table. A celebrity Ang Mo chef in Geylang certainly has appeal. 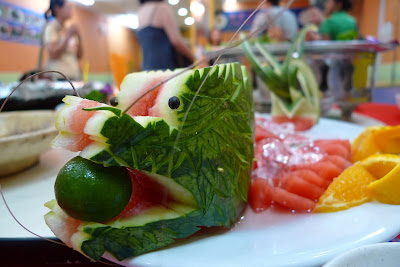 See? Even the humble fruit platter has a elaborately-carved dragon head.

Anyway, talking about Geylang, Bob was quickly introduced to the many fruits from durians, mangosteens, jackfruit to rambutans. When a celebrity Ang Mo chef tries a mangosteen.... 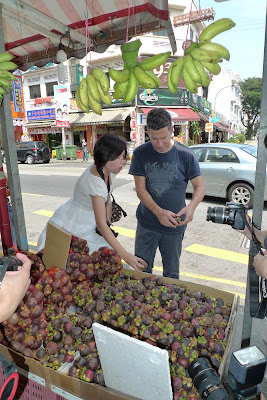 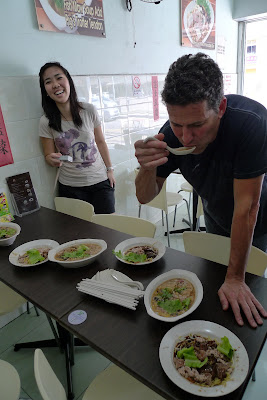 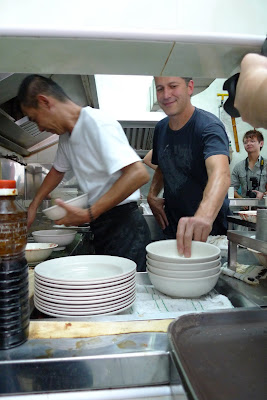 Bob had a taste of good pork stock and was shown the ropes of making a bowl of Bak Chor Mee in drama-mama style.

The final stop was meant to be a Katong Laksa Showdown but due to time constrains, we had to forego that. Alas. Bob was so looking forward to this.

Laksa disappointment aside, I was certainly thrilled to meet Bob Blumer in person! I've been a fan of his Surreal Gourmet show and his sometimes unorthodox, creative creations from his signature Toast Mobile. So sitting in a mini bus next to Bob Blumer was certainly, I have to borrow this term, surreal.

The makan tour was over all too soon and I heard he has a dinner to cook at right after this! His schdule must have been really packed. Poor Bob. 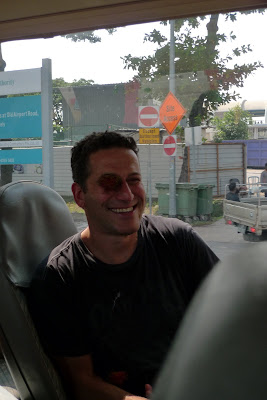 But I'm sure his fun-loving nature will carry him through, as always. By the way, just in case anyone's wondering, it was halve a rambutan peel that covered his right eye. 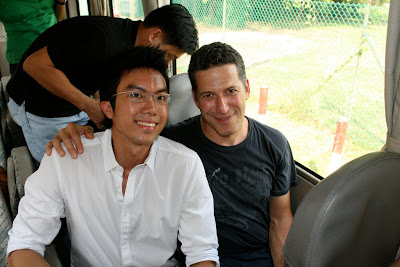 Thanks to Priya and Rita of Weber Shandwick for the invitation, the Discovery Travel & Living folks for hosting moo, and the kind stall owners of Kway Guan Huat and Seng Kee Bak Chor Mee who specially opened their stalls on their off-day!

Chew On This: Bob Blumer's third and latest season of Glutton for Punishment premieres every Thursday at 2230hrs. Encores air on Sunday at 0200hrs and Tuesday at 0800hrs on Discovery Travel & Living (Starhub Channel 16).
Posted by The Hungry Cow at 9:50 pm

I'm sure Prof Chia will understand. :)

Julia: I hope so! But then again I'm prepared to be marked down.

Camemberu: He'll kill me!! Hahaha. Nah, this prof so busy no time for fallopian tubes or to kill cow.