A year or two ago, il Lido, a high-end Italian restaurant opened in Sentosa and won over praise especially about its view of beautiful sunsets. Me? I can't comment much since I've only read and heard about it. The then high prices keep me away. Now they've introduced a more "recession-friendly menu".

But a month ago, I walked past what used to be NYDC at Suntec basement and saw boards indicating the arrival of Cafeteria il Lido. A cafe version of il Lido?

Then I had lunch there last Sunday. The casual, relaxed vibes and wallet-friendly menu were sure more inviting. 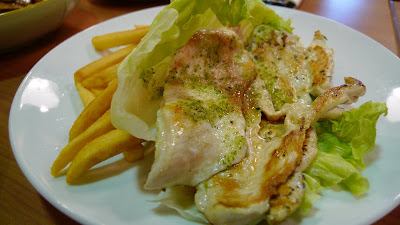 The Grilled Chicken ($6.50) featured thin slices of chicken fillet slathered with a mild-tasting pesto, and served with shoe-string fries. Using chicken thigh would result in a more tender bite but I suppose those who like eating chicken breast and the more health-conscious would stick to fillet. 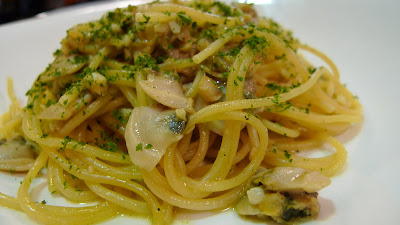 Clams Aglio & Olio ($7.90) was done nicely with firm pasta coated in an olive oil and garlic mix. The clams were partly sweet and briny, smallish but there were thousands of them! Okay lah, thousands would be an exaggeration but there were many many. 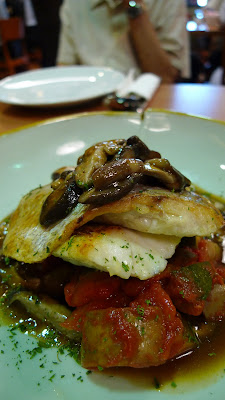 Mushroom Seabream ($12.90) was also not bad. the fish was just nicely firm and sweet. However, I felt that it could do without the heavy brownish sauce. 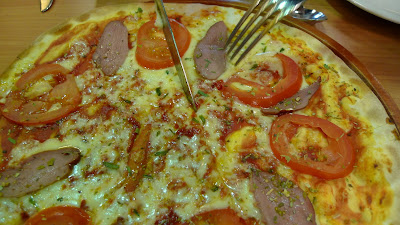 The next dish reminds me of two posts that I want to do- House @ Dempsey and Ming Kee Live Seafood. The Today's Special- Smoked Duck Pizza ($12) had a very thin crust. Almost like a biscuit. The toppings were kept simple. Just slices of tomatoes and smoked duck on a cheesy-tomato base. But I like its simplicity of flavours. 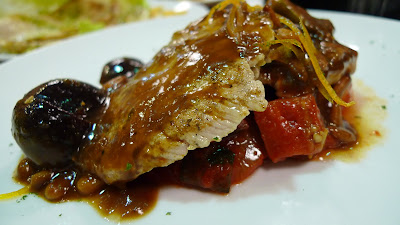 The Roast Pork & Figs ($9.90) was also decent with pan-fried pieces of pork, figs (those black globular things in the above photo) and a medley of vegetables like zucchini and brinjal. The figs were sweet and paired well with the pork. A sprinkling of pine nuts and orange zest lifted the flavours of this dish. 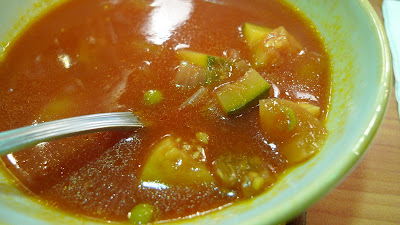 As part of a UOB promotion, each order of a main course (fish, chicken, beef or pork) before 2pm, entitles the diner to a free soup and coffee/tea. The soup that day was a tomatoey one with peas, onions, brinjal and zucchini. Pretty average but at least I didn't have to pay for it.

In a nutshell, I found Cafeteria il Lido to serve above average Italian food at reasonable prices. About 80% of the menu are below $10. What was a shame was the repetitive flavours (same tomato sauce, brown sauce, medley of vegetables etc) that seem to appear in quite a few dishes. But I guess being "the little brother", it probably also has a little kitchen. 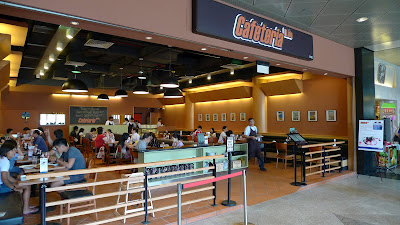 Chew On This: While you're there, check out the beautiful decor under the overhead lamps! 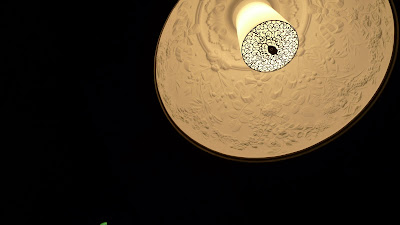 Haha this is the 1st positive review I've read on this place. HGW reviewers are slamming it like crazy ha.

myfoodsirens: I like looking on the bright side. Hehehe.

Being just barely a few weeks old, it is surprising that this place has already garnered so many online reviews.

I'm not too familiar with the HGW scene but took a quick look after your comment. Oddly, quite a number of the bad reviews are first-time posters. Lol!

Anyways, taste is personal. So I guess the only way is to really experience it for oneself. :)

PS: No prob about the link and thanks for dropping by! Cheers.

elaine: Ooo... how interesting. Hehe. I have not been to Forlino but will keep my eyes on their lamps if I drop by. :)