There are some who will debate at lengths about the authenticity of a dish. But where's the fun I wonder? Especially when one's tired and hungry... More important is that the food tastes good, no?

Cos last weekend, Ryan brought me to Saizeriya- an Italian restaurant. Or at least that's what's stated on the signage. But the menu does have glimpses of French and Japanese influence. Not that it mattered to this hungry cow and friend. 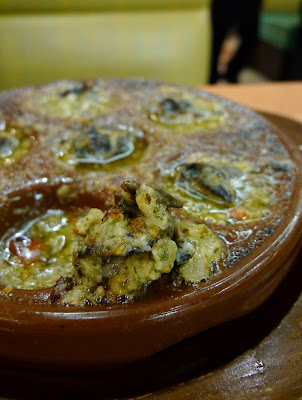 The Glazed Escargots ($5.58) was probably the cheapest escargots I have ever seen in Singapore! Incredible value for six plump, tender morsels sitting in a pool of what I thought to be butter, salt and garlic. Yums. 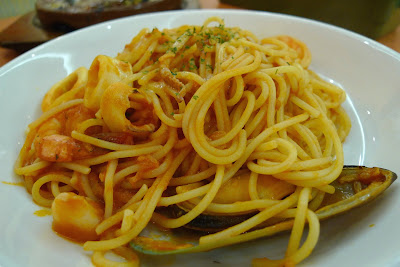 Seafood Spaghetti with Tomato ($7.18) had firm pasta, though it was not quite al dente. The sauce was packed with seafoody, briny flavours though that meant that the tomato taste was a little lost. But twirl a strand or two around your fork and dip it into the pool of garlicky, salty oil from the escargots and pwahhh! Instant perk up. 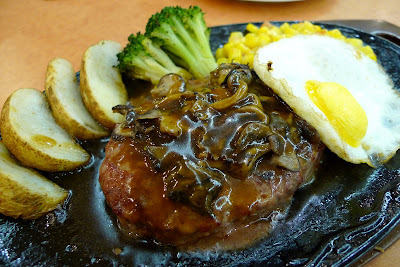 Hamburg Steak with Mushroom Sauce ($7.98) was oyishi! The thick patty of minced beef exuded a sweet onion and Worcestershire sauce flavour. With the slices of shitake mushroom topping the hamburg steak, it's no secret that mushrooms and beef are best friends. This dish also came with grilled potato wedges, boiled broccoli and corn on the side...for vegetable goodness. A pity the fried egg didn't have a runny yolk. That would have intensified the dish. 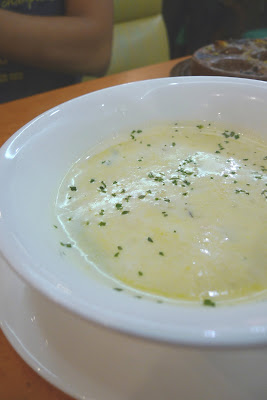 Soup, ironically, was the last to arrive. This Seafood Chowder was a little watered down for my taste. But there was a sweet, cream flavour with chopped up seafood bits.

All in all, it was very decent at an almost unbelievable value. I wouldn't classify them as an Italian restaurant but that's not really important. Good food, good price is. 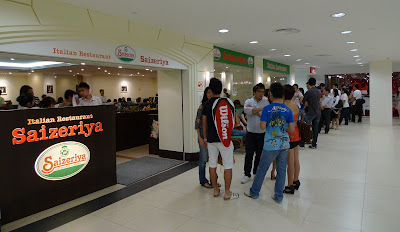 Chew On This: According to Wikipedia, Saizeriya apparently started up as a Western restaurant in Japan and later switched to become an Italian restaurant but business dropped. So after reducing the price by 70%, it became an instant hit! Today, they have over 750 stores in Japan. Something must be right with them.
Posted by The Hungry Cow at 7:09 pm

Love the hamburger steak there! And the idea of paying 1 price for a variety of drinks at the drinkbar.. Good for "long long" dinners :)