Man and his meat. It almost seems a natural bonding since caveman times. And so it was apt that we had dinner at the newly-shifted Aston's Prime for Father's Day.

I have tried Aston's Prime once when it was still at Joo Chiat, together with friends from Ieatishootipost. It was a session to garner feedback, especially of the then newly-introduced hotplate. I can still smell the scent of onions gently sizzling on the hotplate.

Back to its new premise at Centrepoint, the hotplate has been discontinued. While there is no more sizzling onions, there also isn't the issue of over-cooking the steak. 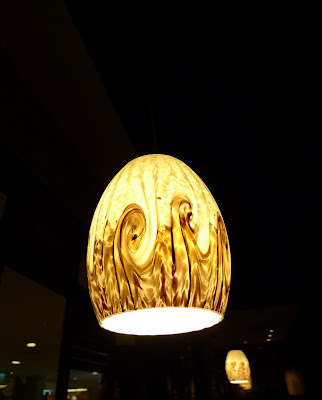 Under the warm glow of the UFO-looking lamp, we browsed the menu (kept exactly the same as Joo Chiat's) and made our orders. 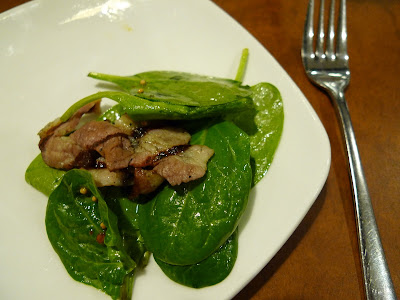 We ordered a Baby Spinach Salad ($8.90) because it had bacon veggies are an essential part of a healthy diet. The bacon was deliciously delicious. Bits of meat and crisp in fragrant saltiness. Perfect for raw leaves. The sun-dried tomatoes also provided a slight tangy-ness. 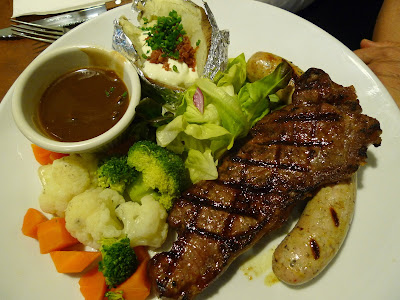 It's Father's Day so dad should go first. Here's his Steak & Apple Sausage ($23.90). The steak was a 200g Angus sirloin done to his favourite doneness- medium-to-well. I had a bit of the apple sausage and liked its meaty bite with a balance of savoury and just a hint of sweetness. He choose Steamed Vegetables and Baked Potato as his choice of sides. 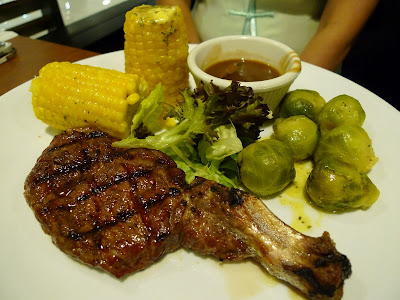 Mum's Veal Chops ($31.90) done medium was as good as I had remembered the one at Joo Chiat too be. But the portion seemed to have shrunk. Anyway, it was tender and sweet with a slight milky, buttery flavour. Mum had the Corn on the Cob and Brussel Sprouts. 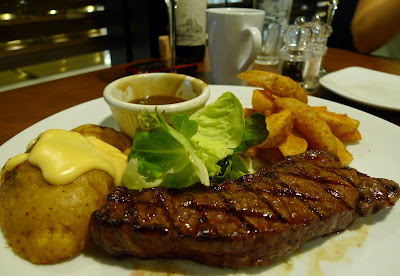 Sis ordered the Angus Striploin ($18.90) also done medium, which turned out to be tough. Her sides of Cheezy Potato Skins and Potato Wedges were yums! Great for picking off her plate. Hahaha. 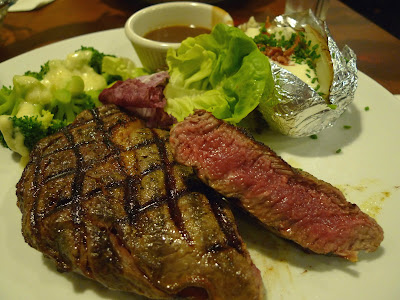 I selected the Angus Ribeye X-Cut ($23.90) done medium-rare, with Baked Potato and Creamed Brocoli. Unlike Aston's Specialties where the steaks are generally 200g and X-Cut means 250g, the steaks at Aston's Prime are 250g (except in combos) and X-Cut 300g. Aston has also changed the meat at this new location from Long Fed to Angus (New Zealand). The Angus Ribeye X-Cut was a thick slab with charred marks on the surface and reddish-pink inside. Tender it was but I feel somehow there wasn't much marbling and the flavour was a tad muted. 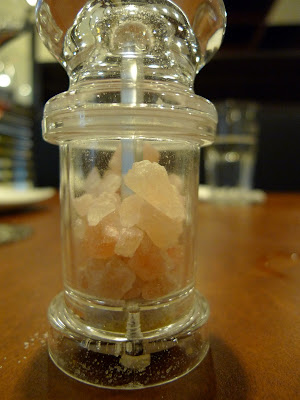 But that's nothing a few turns of the salt mill can't fix. Then I realised, it was under or not salted. Duh. A sprinkling of this pink salt instantly perked up the sweetness of the steak. 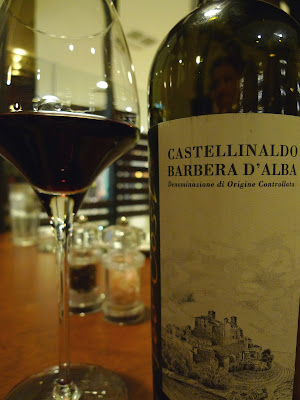 And it was all washed down with a Barbera D'Alba DOC 2003 ($69 from thehungrycow). Plenty of red fuits, plums and smokiness. It had a hint of tangy-savouriness that reminded me of plump tomatoes. Juicy with low tanins and good acidity. 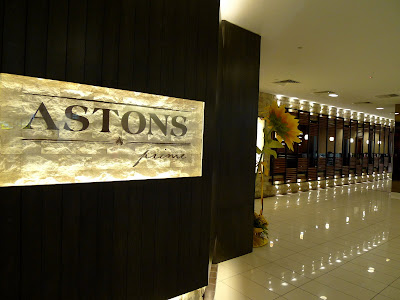 Chew On This: As with all the other Aston's outlets, what you see on the menu is what you pay! No GST, service charge. That's outstanding for a place especially on prime land. And the service is pretty commendable too. At this price point and for the quality of food, no other establishments even come close.
Posted by The Hungry Cow at 2:35 pm

hi, i think GST is included, but no service charge.

Hello and thanks for the clarification. Yep, the price is all-in! :)