My phone rang one late afternoon. Mum called to inform me of this "very good value steak offer", knowing that I eat beef love steaks. And dinner was set for that day.

Phin's Steakhouse has been at Tampines Mall for quite a while but I haven't been back due to a somewhat disappointing first experience a long time ago. This visit was spurred by my mum's enthusiasm.

The promotion featured a 300g Tenderloin Steak at just $16.90. Sounds hard to believe but it was there on the menu. What was harder to believe though was the service that came across as weird, accommodating, brusque and bordering on being rude.

After browsing the menu, I realised that a 300g Tenderloin Steak was listed as $29.90 (non-promotional price). The 50% off promotion should work out to $14.95 instead of the listed $16.90. So when I queried the manager on the issue, he started to explain that $16.90 is already "very cheap" and that the price on the menu was not up-to-date. We stated that while we agreed $16.90 was "very cheap", it is not right to declare a 50% promotion when the offer price does not align up accordingly.

Even more strange was that he started to explain that his suppliers were selling him at a certain price and that to go below $16.90 would mean to make a loss. This made me feel like I was trying to be difficult and cheapskate. Argh! I gave up. Order, eat, pay and leave I thought.

Then perhaps to "please us difficult customers", the manager included garlic bread, a soup and a drink to our tenderloin orders. 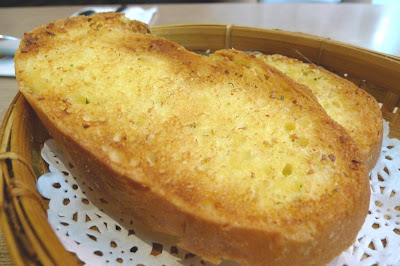 The garlic bread was decent with a toasted slice slathered with garlic butter. Reminded me a little of Jack's Place. 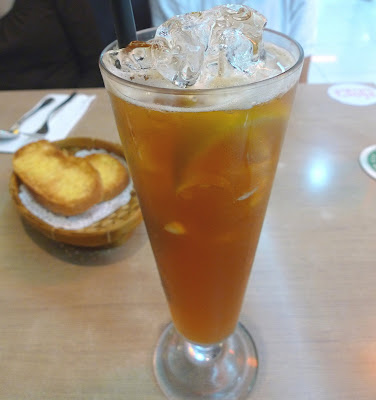 The Iced Lemon Tea arrived, not before being touted as "world best" and "worth at least $6" by the said manager. Dad's Hot Coffee similarly came with a "better than Starbucks" tag. Mum's Iced Green Tea was apparently "also world best". 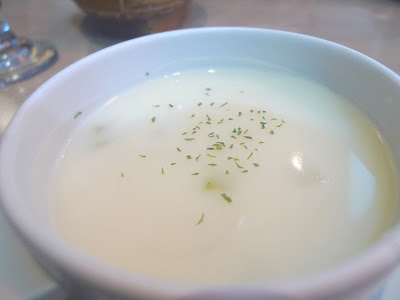 The soup-of-the-day was Clam Chowder. Too much cream, too little taste. But served hot and to hungry (and a little irritated/bemused) people, it still ended up in the tummy. 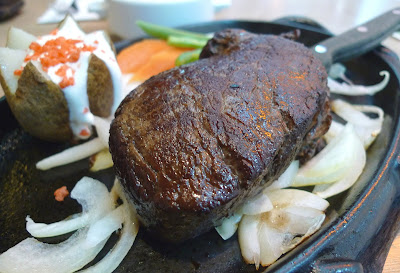 Soon enough the 300g Tenderloin Steak appeared. It was sizzling on a hotplate with a bed of white onions that kept the underside from over-cooking. As with most tenderloins, this one too had a cottony texture but I liked its well pan-fried/seared exterior. The portion too was generous. A small baked potato and some carrots and beans served as veggies. The bed of onions was deliciously sweet and slightly caramelised after spending some time between hotplate and beef!

Then the manager placed down a bowl of mushroom sauce that he claimed was "made in-house using wild mushrooms that were very rare in Singapore". Sounds dangerous. I mean wild mushrooms in Singapore you know? Anyway the white, creamy sauce was akin to the Clam Chowder. The slivers of what tasted like shitake mushrooms were nice though.

The final moment came when the manager mentioned that their next-door neighbour, a pasta chain, served "2-minute food" and that we should try his pastas instead.

We finished up the food, paid and left....for Pasta Mania where I had a small pizza and a plate of tortellinis.

There is a difference between taking pride in one's product and being simply boastful. Customer service is crucial to the dining experience and has to be with plenty of tact. I can tolerate relatively non-existing service in a casual place but disservice is another thing. I do hope future visits would be more normal. 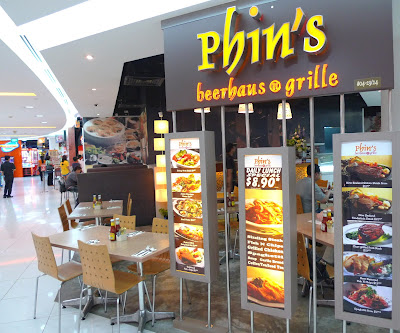 Tampines Mall, why are you located so far away? :-(

as for service, i think eateries should know by now that customers are now more well-equipped with knowledge on food, thanks to both the printed and electronic medias. cheat us not, we bite. or chew, in this case..hehe..

Haha....Now you know what recession does to the F&B industry? LOL

Just so that I understand this, you had a steak and left after that for pizza and tortellini?

Keropok Man: From my angle....where got far? Lol. You can check out the one at Liang Seah! More central. :)

Nic (KHKL): Yea, the "wild mushroom" spooked me! Luckily it was just shitake. The manager there was unbelievable. Chew! Chew! Chew!

DO NOT EAT AT PHIN's! Especially the Liang Seah street one. They are gross.

However, if you guys wanna be suckers, please go ahead. Don't forget to post the reviews when you come back with lots of bottled up anger. Haha.

Try at own peril.

Yaaak! I have never liked Phin's. But only tried their Liang Seah branch and that was yonks ago when they first started.

Haa...it's really annoying when you try to communicate to people who just don't listen properly. So many times I've seen the argument "eh this price is already very cheap" when we point out a pricing error to them. We are not asking for the lower price!

Anyway, how professional can they be if they can't be bothered to update menus or at least do proper discount calculations.

LOL@wild mushrooms in Singapore too!

Kathy: Woah. Sounds like u had a very lousy experience there.

Thanks for the feedback anyway and I guess, suckers or not, most people do try out foods at their own peril.

I hope their management looks into this.

And stay away from wild mushrooms in S'pore. They are d-a-n-g-e-r-o-u-s. Hahaha.