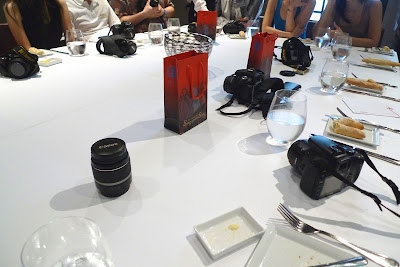 You know something's seriously happening when you see this... The sight of big guns laid on the dining table like menacing weapons of cowboys in an atas tavern, while fingers fuss about with fork, knife and bread.

Only that instead of cowboys, it was food bloggers. And the atas tavern was the very modern Guther's . It was the food bloggers' lunch. 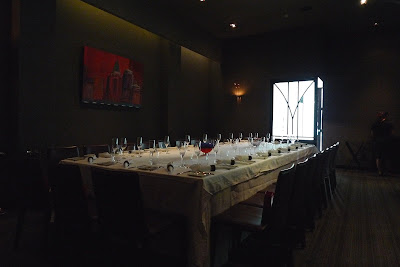 The interior was dim but I was glad the large table accomodated all 24 of us, making it more fun.

For our lunch, Chef Gunther specially prepared a Carte Blanche menu using fresh ingredients that were available at hand. 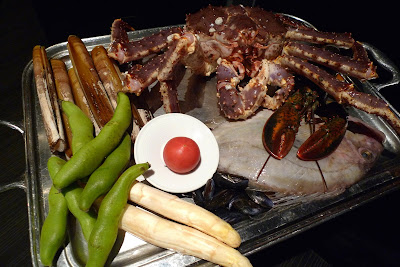 Talking about fresh ingredients....A tray of fresh (and very much alive!) produce was displayed as an indication of the food to come. The live king crab seemed to be pals with the lobster with claws and legs inter-tangled. I'm happy for them crustaceans...who in turn often return the flavour favour. 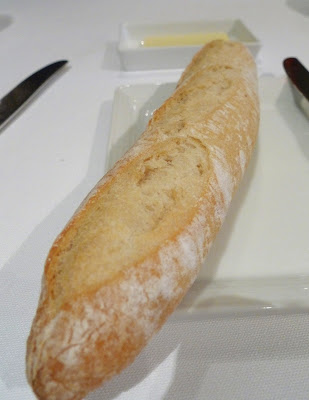 Lunch started with this stick of bread. It later turned out that man does live on bread indeed as I went through four or five of these throughout the meal. 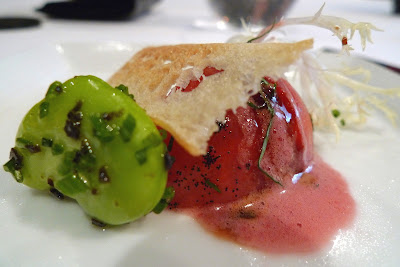 The starter of Japanese Tomato featured a wedge of Japanese tomato that was firm and full of acid and a certain sweetness. The vanilla seeds in the sauce amplified this perceived sweetness a notch further. The green bean on its left was a fava bean that came from those huge pods on the display tray. 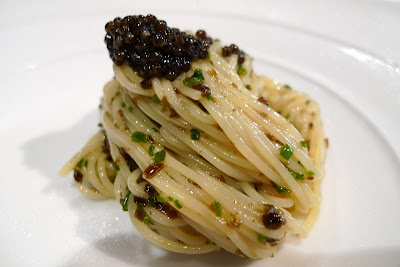 Then came the Cold Angel-Hair Pasta, Caviar. It was chilled goodness that was a pleasure to slurp and chew on with its fullsome flavour of truffle oil and konbu. Initially, perhaps in a delirious stage of hunger, I had thought there was a gas leak! Fortunately, it was just the generous usage of truffle oil in the pasta! Heng ah. 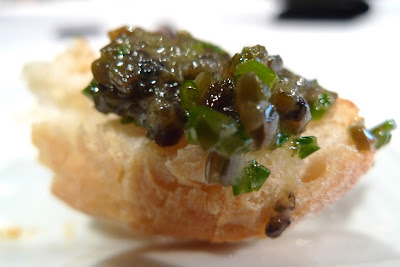 When there's still left over chopped konbu and spring onions in truffle oil, who do you call? More bread please!! And it almost becomes a tasty bruschetta. 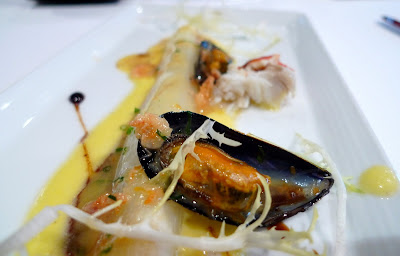 It's white asparagus season! And so here's a dish of Poached White Asparagus, Bouchot Mussels. The white asparagus was tender, though a little fibrous at the end, and went well with the Hollandaise sauce, lumps of crustacean (Hello my shelly friends!), mussels that tasted of the sea and sakura shrimps. 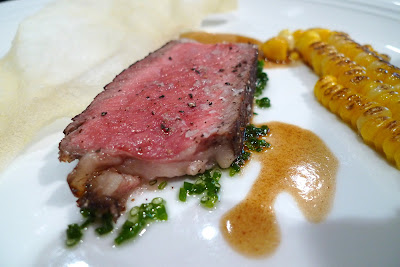 When it came to the main course, I joked that they apparently do not think that a cow should eat beef when the pork chops were brought before me. But a small misunderstanding was quickly cleared as the Grilled Cote de Boeuf, Japanese Sweet-corn, Sauce Bordelaise arrived. The grilled slice of beef was a beautiful pink and was lightly seasoned with course salt and black pepper. While it was decent, I had expected more flavour. The sweet-corn was sweet and lightly-roasted while the fried xxxxxx(potato? tapioca?) crisp was a joy to crunch! 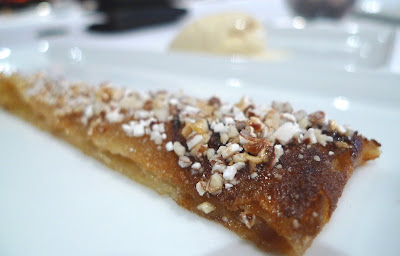 And it came to dessert with the Fine Apple Tart a la Dragees, Rum & Raisin Ice-Cream. This was sort of a crispy pancake coated with sugary, crunchy crushed almonds, and was delicious! The rum & raisin ice cream didn't quite do it for me unfortunately. 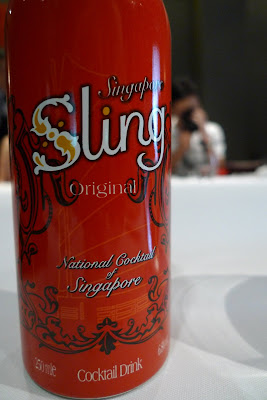 Each of us walked away with a bottle of Singapore Sling in a small red paper bag. Something sweet to take home after the meal. 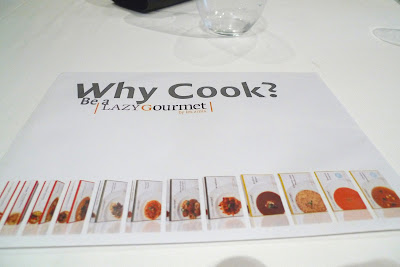 Another gift was the Lazy Gourmet hamper that I had won in the lucky draw. Yay! Fuss-free gourmet food in the comfort of home coming right up.

Special thanks to Some Like it Haute and Ladyironchef for putting this gathering together, Chef Gunther and staff of Gunther's and the various contributing sponsors. It was fun to be in the midst fellow food bloggers, catch up with old friends and meet new ones.

A shame that I was hungry and tired, hence not in the best of moo-ds to go around the big table. *sheepish look* Oh wells, I'm sure there'll always be the next time!

The hungry moo signing off. 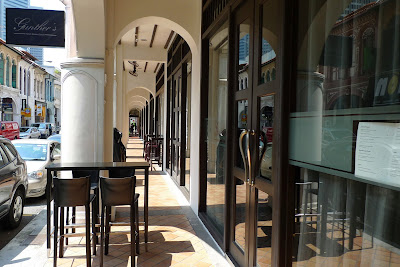 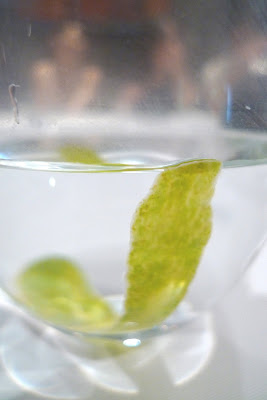 Hey waiter, there's a cucumber peel in my neighbour's glass?! Maybe it was their take on liang zhui (cooling water). Hehe.
Posted by The Hungry Cow at 12:23 pm

gas leak??? haha! such a hilarious take on the lunch that day. i shudda done that as well! pair the pasta topping with the bread, i mean. then again, i licked the plate clean already lah, before they took the plate away. nothing left.

Nic (KHKL): It's the battle between the tongue and the bread I guess. Hehe. As long as the plate is clean!

haha I almost put that in my blog too, that you jokingly asked if there was a gas leak...but it really did smell like such.