Dim Sum-ing on the 37th Floor 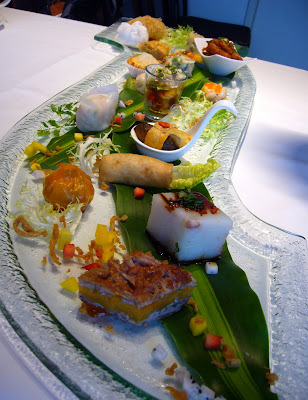 To roll off the start of the Dim Sum Marathon, here's a brief introduction to this hardcore event. Cuisine & Wine Asia wanted to do up a dim sum feature with 5 food bloggers who were rounded up by ieatishootipost. A total of 6 dim sum tasting sessions were scheduled into 5 days. That's a whopping load of dim sum bites in a week!

Due to my schedule, I managed to make it to 4 out of the 6 sessions. Camemberu was the only blogger who made it for all 6 session and hence crowned Dim Sum Queen! How she could face another siew mai after all the sessions has got to be due to true inner strength. The other bloggers involved were Aroma Cookery and Ladyironchef. So hang on to your socks, it's gonna be a hell of an amazing (dim sum) graze!

My first session was at Hai Tien Lo, located in the Pan Pacific Hotel. Thinking back, I really should have taken a photo of the view from the lift. Afterall, travelling up 37 floors was certainly part of the Hai Tien Lo experience. Breathe. Slowly. Get. Hungry. 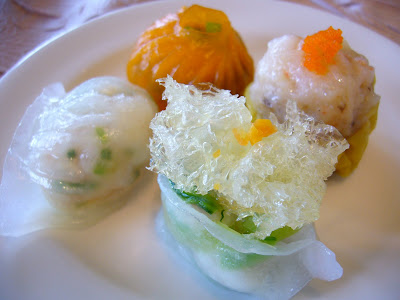 Starting from the left most of the plate, the Steamed Shrimp Dumpling (aka Har Gau) had a slightly chewy skin wrapped over fresh prawns and a very distinct taste of Chinese Celery. Alas. I'm no fan of the pungent herb though fans of it would appreciate it for its strong and refreshing fragrance.

The orange-skinned fella at the back was the Steamed Vegetarian Dumpling Stuffed with Water Chestnuts & Mushrooms (if my memory was not clouded by dim sum). I felt this was pretty alright though nothing outstanding.

Next was the Steamed Pork Dumplings with Fish Roe (aka Siew Mai). This was one meaty and juicy siew mai but the proportion of pork was a little highhanded, giving it a pronounced porkiness.

And finally we come to the one in front, Steamed Prawn Paste Topped with Fish Maw and Savoury Gravy. This was an interesting one. The fish maw gave the dim sum a different, almost textural, feel. The taste was kept very light-tasting. 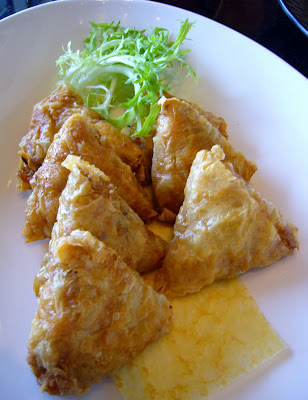 Instead of the usual longish rolls of fried beancurd skin, the Deep-Fried Bean Curd Sheet Stuffed with Chives & Prawn Paste were triangles! The filling of prawn paste was fresh and the skin was nicely crisp. Dip into some black vinegar to get the acid to cut though some of the oil and refresh the palate. 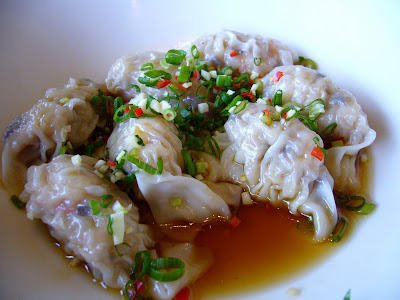 Looking like a Szechuan dish, the Poached Beijing Dumplings Stuffed with Chicken & Prawns in a Chili Vinegar Sauce spotted a leaner, more subtle taste than similar dumplings made with pork. The piquant sauce was just a tad spicy but perked up the dish. What I would have wished for was a few drops of Szechuan peppercorn oil. 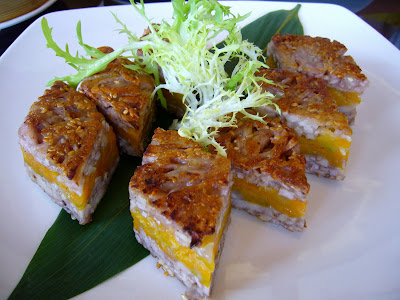 The Deep-Fried Crispy Yam Patties Layered with Mashed Golden Pumpkin was visually appealing. It looked almost like a nonya kueh! But it certainly did not taste like one. This was a tad too dry for me and I would recommend eating this quickly as it tends to get stodgy after a while. Flavour-wise, the starchy sweetness of the yam and pumpkin was overwhelmed by five-spice powder. Perhaps, cutting back on the five spice powder and infusing some shallot oil would give it more depth. 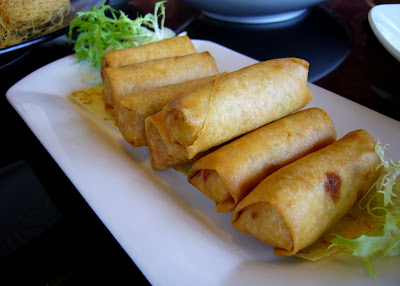 Another vegetarian dish (3 so far) was the Deep-Fried Vegetarian Spring Rolls. Simple dish that delivered with crackling skin and crunchy julienned veggies. 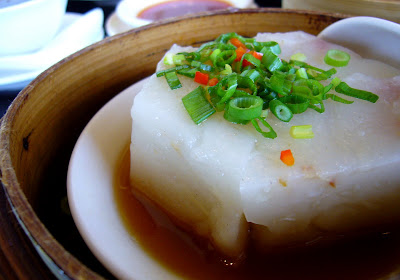 I don't know about you but I like having both steamed carrot cake as well as the pan-fried ones when eating dim sum. The Steamed Carrot Cake with Preserved Meat was okay though the flavour of the preserved meat was weak. 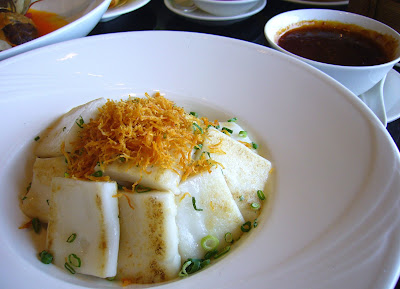 Cheong fan is pan-fried here. It was my first experience with it prepared and served this way. The Pan-Fried Rice Flour Rolls with Crispy Conpoy had an alluring smokiness on the outside but remained soft and steamed in the inside. Dip into the accompanying sauce and it was a fun way to eat cheong fun! Just remember to have it while it's hot. 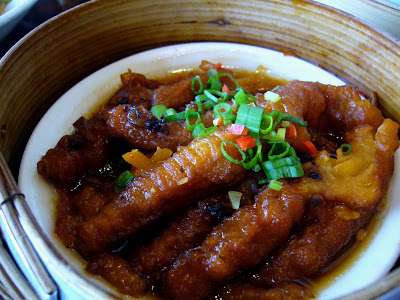 Another dim sum favourite of mine is chicken feet! Aka pheonix claws (must be a poet who coined this term). The Steamed Chicken Feet with Black Bean Sauce was tender but the searing heat from small chilis was the first to make an impact on the taste front. Some like it hot. 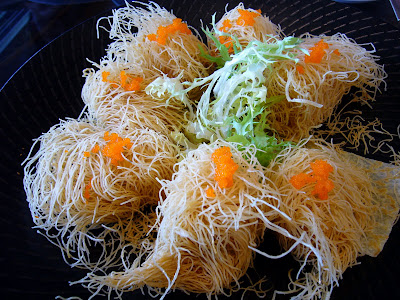 This frizzy-looking ball of a dim sum was the Deep-Fried Sea Perch Wrapped in Vermicelli. I enjoyed crunching through the thin layers of fried vermicelli. The sea perch was fresh-tasting and exuded a subtle sweetness. 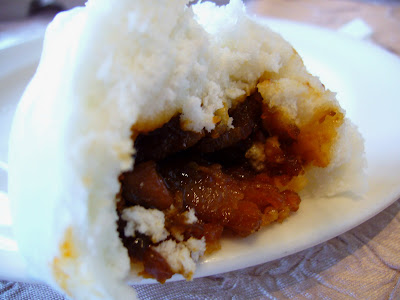 The Steamed Barbequed Pork Buns (aka char siew bau) were pretty good with the slightly fatty pork and tasty sauce. The pau itself was slightly fluffy with a nice bite. 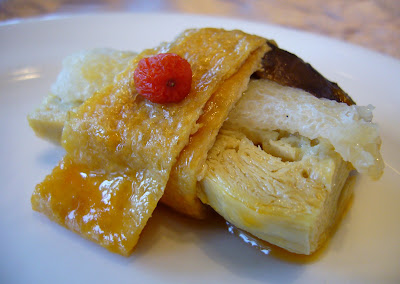 Stuffed Vegetarian Rolls with Bamboo Pith, Pine Mushrooms, Enoki Mushrooms, Carrots & Bean Gluten brought to mind a very refined luo han zai. The goodness of the ingredients spoke in gentle flavours that were harmonised. Yes, I felt like a xxx-dynasty Chinese poet after this. 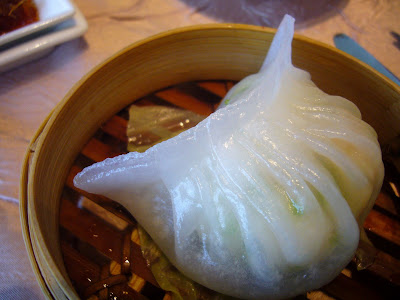 Then the Imperial Lobster Dumpling arrived. It was about 2-2.5 times the size of a har gau. And inside was (no surprise) lobster flesh. It would have been interesting to inject lobster oil into this. Mmmm... 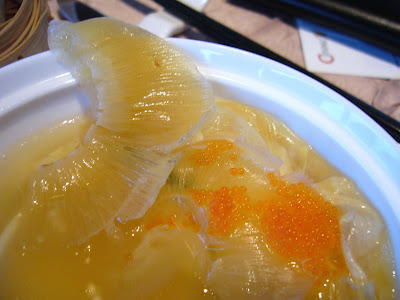 My lobster oil fantasy was interrupted with another special item- Special Steamed Crab Meat & Shark's Fin with Jin Hwa Stock Wrapped in Dough. The broth was slightly sweet with flavours of dried goodies like scallop and Jun Hwa Ham. The portion of shark's fins was generous and should appeal to shark's fin lovers. Shark's fin is considered a delicacy but personally I don't feel it's a necessity for good soup. 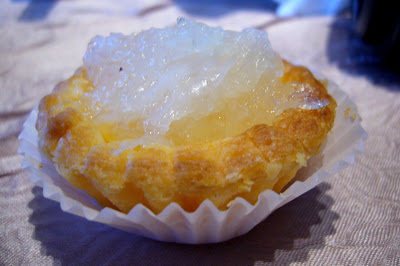 To end the Hai Tien Lo dim sum tasting session, dessert was in the form of Bird's Nest Egg Tarts. A very luxurious topping for the humble egg tart indeed.

To sum up my Hai Tien Lo experience, I found that their deep-fried items tend to stand out more than the steamed ones in general.

While some people can debate over what constitutes a good dim sum, I would rather enjoy good company and the view from the 37th floor...over some dim sum of course.

Thanks to Cindy and Merissa of Pan Pacific Hotel for hosting us and Jackson of Cuisine & Wine Asia for doing the dim sum feature and making this tasting possible. 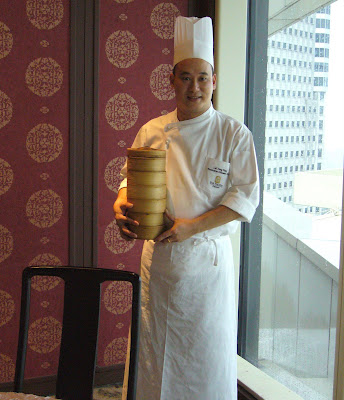 I forgot to take a photo of the entrance so here's a pic of the Chef instead. :)

Chew On This: The above items are available in their weekend ala carte buffet brunch. More than 60 dishes to choose from! How about a brunch with a view to boot? When the Marina Bay IR is completed, the enhanced view would be even more stunning!
Posted by The Hungry Cow at 12:34 am

haha i probably go back for their alacarte dim sum to try some of them to see how it is :)

ladyironchef: Good also cos less-than-hot dim sum not the most appealing.