Dim Sum-ing in the (Cherry) Garden

Dim sum round two for me was at Mandarin Oriental's Cherry Garden. For the rest of the bloggers, it was literally their second round of dim sum having just visited Si Chuan Dou Hua hours before this. 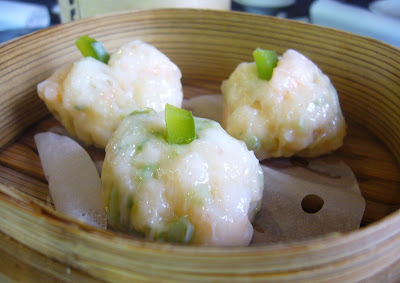 The tasting session started off with the Steamed Crab Meat Dumpling. The green bell peppers were too strong a pairing with the delicate flavours of the crab meat. A pity because the crab meat had a really nice texture and tasted fresh. 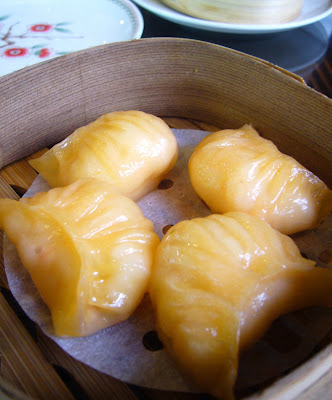 Next up, a rather distinct-looking har gau was presented. The Steamed Prawn Dumpling with Carrot Puree spotted an orange skin that was naturally imparted by carrots. Thankfully for this non-carrot fan, it did not taste like carrot. But it apparently still held the nutritional goodness of carrots. I don't mind having carrots in my diet via these dumplings! The prawn filling tasted beautifully fresh and succulent. This gets my vote for best har gau among the 4 tasting sessions that I had attended. 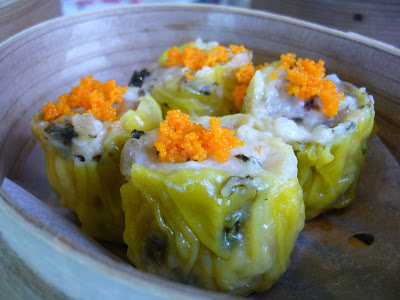 Not to be outdone, the Steamed Pork with Preserved Vegetables Siew Mai, was excellent! Chopped up bits of mei cai (a preserved vegetable) added a whole new dimension to the siew mai world. The salty-savoury flavour of the mei cai balanced out the pork very well. An ingenious idea to include this humble ingredient. This siew mai gets my vote for best siew mai among the 4 tasting sessions I had attended. 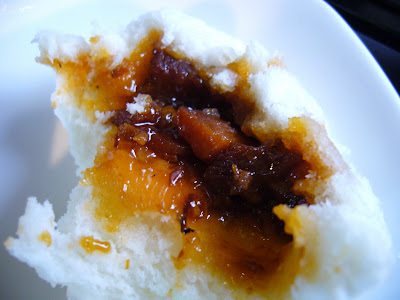 The char siew bao was given a gourmet-ish twist here by using Kurobuta pork. The Steamed Kurobuta Char Siew Pork Bao had a fluffy texture with a savoury and just slightly sweet filling of Kurobuta char siew. It was particularly fragrant and flavourful. 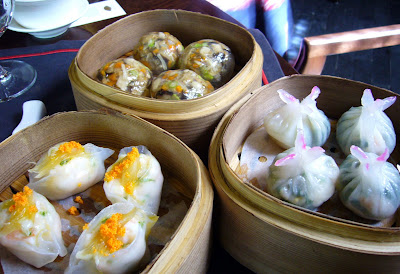 From the left, the Steamed Shark's Fin Dumpling with Dried Scallop and Shrimp was just average, being sort of a permutation of har gau with shark's fin. The next item towards the back was the Truffled Essence Crystal Dumplings stuffed with Assorted Fresh Mushrooms. The truffle essence was probably too subtle for me. The skin was nicely chewy and the filling contained chopped mushrooms and veggies. The item on the right was the Steamed Chinese Spinach Dumplings with Shrimps, Garlic and Salted Egg Yolk. I didn't really take to this item with its dry, crumbly filling. Taste-wise, it was rather muted as well. 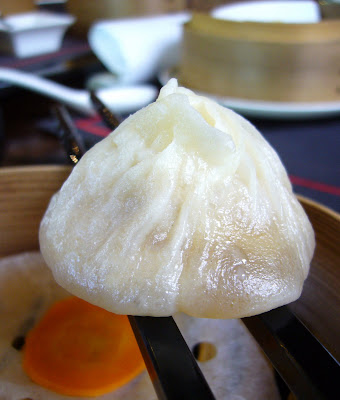 The Xiao Long Bao had a resilient skin that had a good bite. The juices encased within it were delicious. 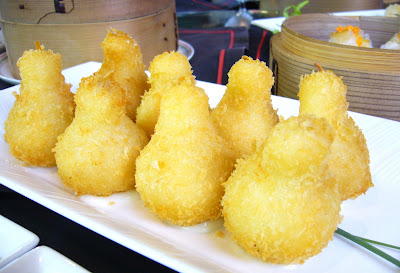 When this plate was brought to the table, I smiled. The golden-brown pear-shaped things looked so yummy! Deep-Fried Potato “Pear” Stuffed with Pumpkin, Jicama and Vegetarian Ham reminded me of my childhood days when pomme noisette was sometimes breakfast. The exterior was well-fried while the interior was made up of a mashed potato layer followed by a mushy inner core of pumpkin. A clever touch was to use a small stalk of lemongrass as the stalk of the "pear". Biting into this brought out a fresh lemony flavour that helped to cut through all that starch. Btw, is Jincama turnip? Wiki says it belongs to the yam family and is known was bang kuang in South East Asia. Hmmm.. 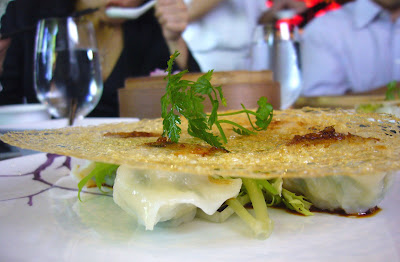 Pan-fried Chives and Chicken Dumplings with Netted Rice Crispy were like guo tie (potstickers). There was a beautiful, crisp layer that hid the dumplings below. 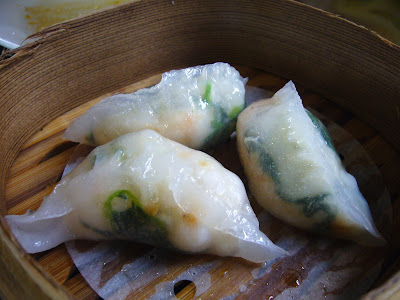 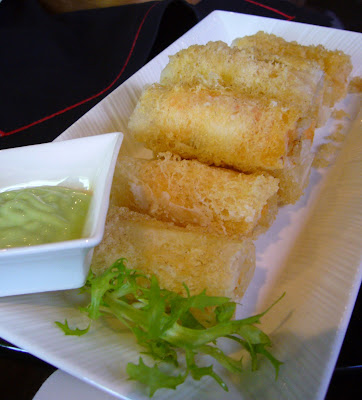 I enjoyed the Netted Rice Crispy Turnover Stuffed with Prawns Apple and Mango. The sweet, fruity stuffing was matched with wasabi mayo. Nice!

The end of the session was marked by this dish- Symphony of “Live” Pacific Grouper prepared in three ways. I thought that meant 3 differently cooked items on the same plate. But it turned out to be 3 different dishes on their own. All 3 dishes were made from one fish. 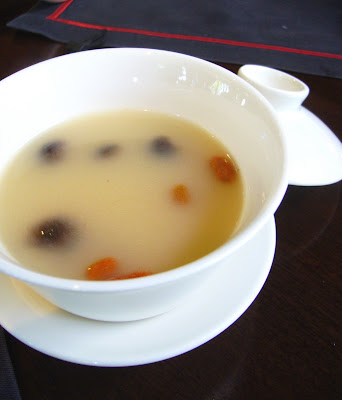 Un: Grouper Fish Broth with Ginger, Onion and Silken Tofu. This soup was comforting with the evident flavours of fish and ginger. 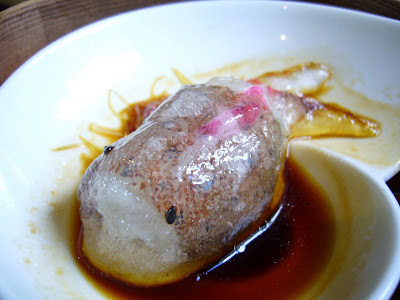 Dos: Steamed Grouper “Crystal Fish” Dumpling. This was simply cute! The real skin of the fish was used to reflect the natural pattern of this mini 'fish'. This was one dish to savour with your eyes. It looked better than it tasted, not that it tasted bad anyway. 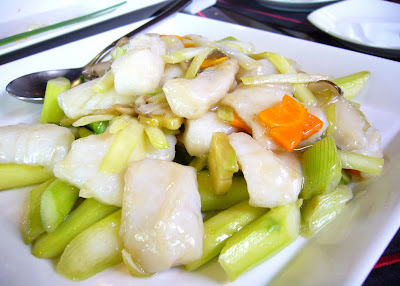 Tres: Sautéed Grouper Fillet with Asparagus. This was a simple stir-fry of fish slices and asparagus. Typical Chinese style of coating the fish slices with cornstarch. Eat this with the restaurant's XO sauce!

Thanks to Kelly and Chef Hiew of Mandarin Oriental for hosting us and Jackson of Cuisine & Wine Asia for arranging this dim sum feature. 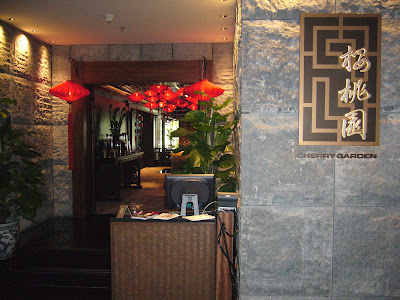 Chew On This: Cherry Garden is the only in-house restuarant that has remained throughout the years since the hotel's early days. Talk about staying pau-er!
Posted by The Hungry Cow at 11:16 pm

i wish i hv the chance to eat more dim sum tho'! hua ting was my first after so many years hehe. my first glance at yr XLB pic, i thought i saw a floating pau akin to ieat's one HAHA.

r u going for the expensive onion rings on sat? :D

evan 이벤젤린: Got chance one. Dim sum easily available on our island and not too ex. :P

I didn't realise the floating pau thingy! But I no so skilled la. Hehe.

Ya, I hope it's gonna be good. *crosses hooves*