Launch of a Literally Cool Product 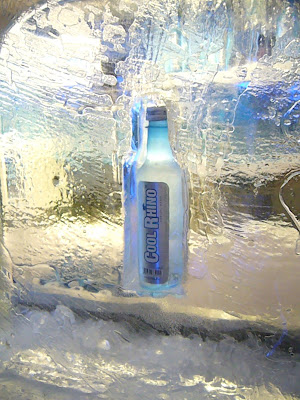 To stay relevant to the times and to appeal to new market segments, most products have to constantly rebrand and innovate. Cool Rhino is a good example.

It did catch my eye in a 7-Eleven store. A week later, Sean dropped me an email invitation to the launch of Cool Rhino at Eski Bar, where cool met cold. 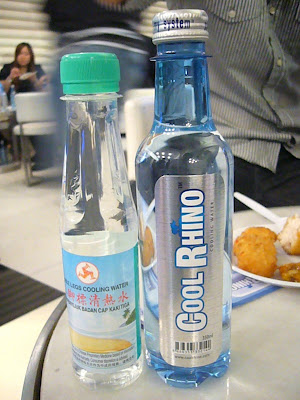 The bottle on the left would be a familiar sight for many. "Three legs water" anyone? I remember Ah Ma and maybe even Mum who would swear by its cooling properties. But to appeal to the younger generation, the Wen Ken Group has decided to reformulate the drink and market it as Cool Rhino (bottle on the right). 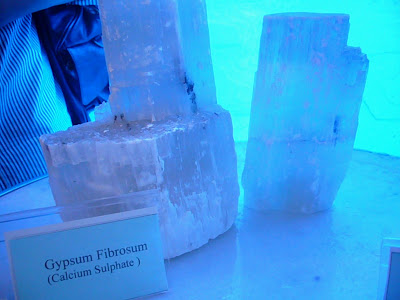 According to their experts, the cooling properties of the drink is attributed to a mineral- Gypsum Fibrosum. 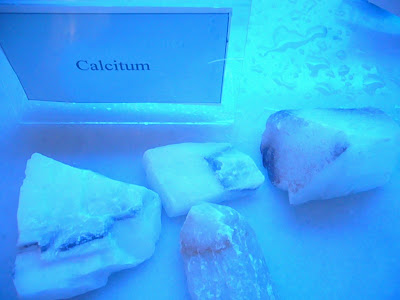 A new mineral, Calcitum, has been added to the new formula to give it a more 'cooling' boost. 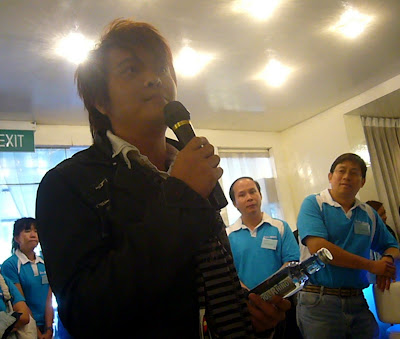 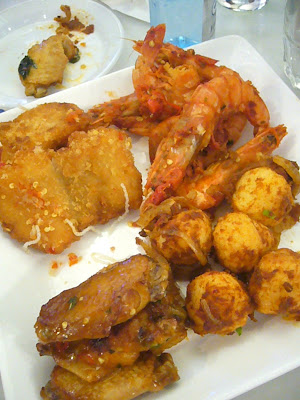 Eski Bar was chilly but the food that was catered were certainly not. Sambal fishballs, deep-fried fish fillets, fried chicken wings in Thai chili sauce, nachos with a hearty sauce and fried prawns with chili all had one aim- to induce heatiness. Suicidal you think? 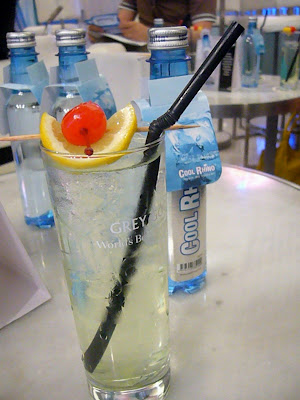 To combat the heatiness, all guests were provided with a cool cocktail, named Rhino Jazz, and many bottles of Cool Rhino. Rhino Jazz was concocted using sour apple, a squeeze of lemon and filled up with Cool Rhino. It was very mild tasting and would appeal on a very hot day, especially to the health conscious as it wasn't sweet.

Hey I think it works. I have a rather sensitive throat (tonsils actually) and I can sense my own heatiness threshold, crossing which would usually lead to sore throat and fever. But after two glasses of Rhino Jazz and a bottle of Cool Rhino each day for the next two days, the heatiness dissipated. Cool!

The drink itself is rather neutral in taste but with a slight alkaline feel. Now I wonder how soups and cooling tea would turn out using Cool Rhino instead of normal water...

Thanks to Sean of Bang Communications for the invitation and the Wen Ken Group for the hospitality. Oh and I met Ladyironchef for the first time too. Yes folks, Ladyironchef's a he! Haha.

Cool Rhino
Available at 7Eleven and most supermarkets including NTUC. 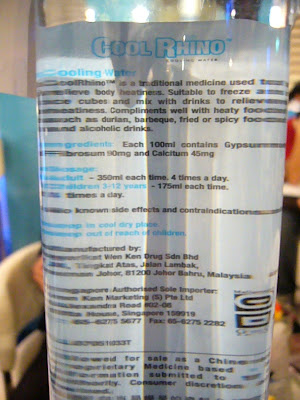 I think the back labeling is really neat! So instead of printing and labeling with two labels, it's now one! Makes good visible use of the clear bottle.
Posted by The Hungry Cow at 2:10 pm

dude this post is so outdated!! hahahaha. so busy? write more eat more : )

ladyironchef: Yes it is. Time has been really tight especially with the current exam period. Later I show you unposted stuff from 2 yrs ago then you scared. Lol.