In the local hawker scene, it seems that not many people cook with any form of gusto or flair anymore. Half-hearted attempts, insipid cooking and sloppy techniques spell disaster for Singapore's local food future. Fortunately (or we Singaporeans like to use 'Luckily'), a few hawkers still have that bit of pride in not only serving up a delicious dish but also with added theatrics.

The man behind this stall serves up Bak Chor Mee (minced pork noodles) by first tossing an empty bowl high in the air. I counted for a good 2-3 seconds before the bowl was back in his hand. Showy indeed and certainly a good form of amusement while waiting for the food. With loud clanking of his large metal scoop to porcelain bowls, his lightning quick hands cooked the noodles and added the various sauces and condiments to the bowl. It had an almost palpable rhythm. 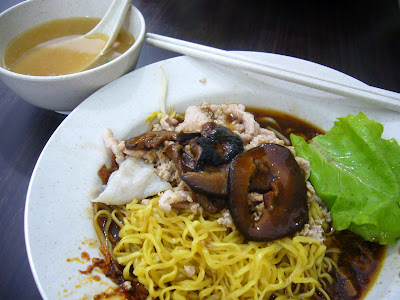 The Bak Chor Mee ($4) dry version had firm eggy noodles in a mix of chilli paste, fried shallots and braised mushroom sauce. For me, the braised mushroom sauce's flavour was a tad too heavy and if blindfolded, I would have thought I was eating Chicken Feet Mushroom Noodles or Braised Pork Rib Noodles. But a generous dash of black vinegar helped put everything back to Bak Chor Mee perspective. The soup that accompanied the noodles was a heady broth tasting of pork and ti po (dried sole) with a bit of liver at the end. Too much and its sweetish tinge becomes out-of-place.

While the Bak Chor Mee was generally good, what hit the G-(Good) Spot were the small fried dishes! 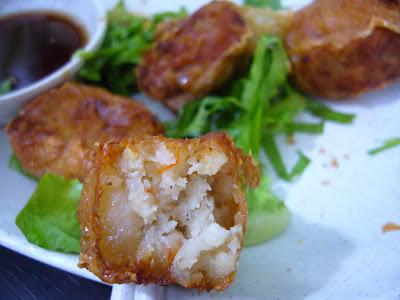 The Hae Chor ($4 for about 7 pieces) is a classic Hokkien dish of minced prawns and pork wrapped in a beancurd skin. The one here had plenty of yam, which imparted a starchy sweetness, and a good crisp skin. Dip into a bit of the sweet sauce for an added dimension. 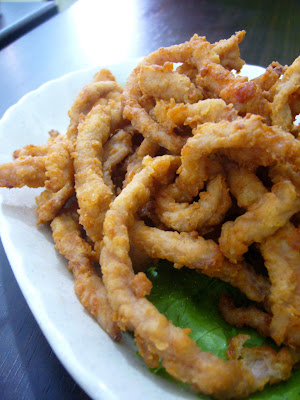 Another good dish to share around (or maybe just with yourself) is the Zha Rou ($4), which literally means fried meat. Tender strips of pork are battered then deep-fried to give a golden outer coat and a very tender inside. The marinate was superb and brought to mind good Hainanese pork chops.

Chew On This: Interestingly, for desserts, there is Tiramisu ($18) on the menu! It's probably for a tray/tub but I did not get to try it...yet.
Posted by The Hungry Cow at 10:58 pm