It's amazing what you can find in your own neighbourhood sometimes. Trying out a different kopitiam for dinner one evening, I stumbled upon two super heroes- Fiery Bak Kut & Super Ter Kah.

I mean I didn't even know that super heroes lived in my backyard.

But anyway, the stall they were spotted at had a familiar name. Before I could scan through my virtual memory of food stalls, Fiery Bak Kut struck me. 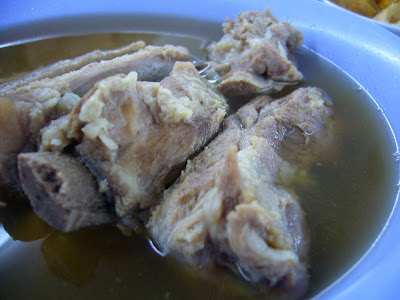 He struck me with an alluring smell. Upon confronting him, he splashed copious amounts of a liquid into my mouth. It had a peppery first impression followed by a full-bodied garlic taste. The spiciness ensued and even seemed to increase after swallowing. Very dangerous indeed. Fiery Bak Kut was meaty with bits of fat that rendered him tender. Tenderness is not a weakness. 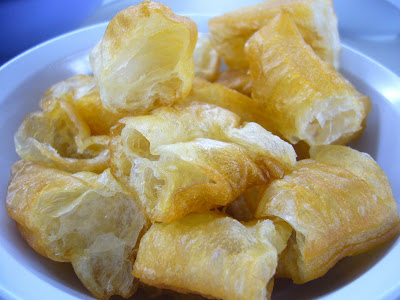 A small fry, You Tiao, was seen with Fiery Bak Kut. You Tiao tried to impress but seemed weak along side the fiery liquid of Fiery Bak Kut. 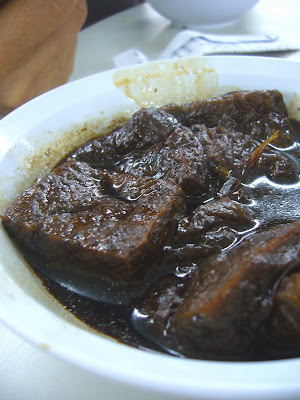 Lurking mysteriously in brackish waters, Tau Pok, sprang a surprise attack. Packed with juices to bulk up his size, he was a walk in the park as I squashed him flat. Poor Tau Pok. He should have known his flimsy limitations. 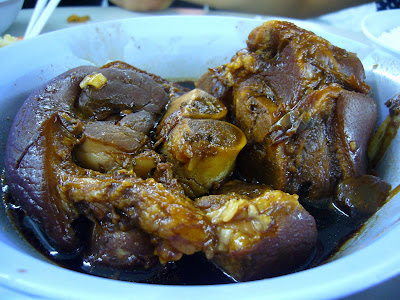 Then out of the dark pool, Super Ter Kah finally emerged. Oh my. He was big and fleshy. I attacked by slurping up the savoury dark liquid surrounding him. A good helpline to call would be Rice. Unlike the wannabes around, Rice here was of a better quality. He had a slight fragrance and a good bite. Then aided by my trusty side-kick, Chopsticks, I pecked at Super Ter Kah's flesh- succulent, sticky and of a wonderfully gelatinous texture. He deserved his name alright!

The encounter with Fiery Bak Kut and Super Ter Kah ended there. Though victorious, I ended up rushing for a chilled ginseng chrysanthemum drink and a pack of Strepsils in the end. You've been warned about that delicious, addictive liquid of Fiery Bak Kut. Easy to overdo. Easy to suffer.

So the next time you take a stroll around your neighbourhood, be sure to keep a lookout for super heroes! 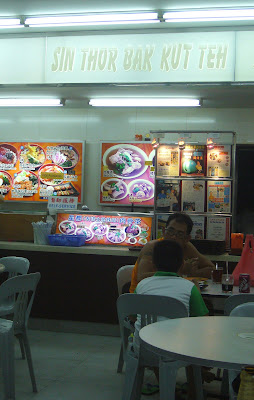 Sin Thor Bak Kut Teh
(inside the Kopitiam towards the end of Simei Mrt which is away from 7-eleven)
I apologise for the vague description of the location but you do know that super heroes can be elusive yeah?

Chew On This: The Lady Guardian of the Stall informed me that this is a branch of the similarly-named stall opposite Eunos MRT. She juggles between both stalls, appearing at the Eunos stall in the morning and at the Simei branch in the evening.
Posted by The Hungry Cow at 10:28 pm

Your description of food is humourous. LOL*

foodies queen: Haha. I must have been in a ditzy mood!

finally, i can have me bak kut teh.

mas: bak kut teh is so comforting especially in this wet season. makes me crave for some now :)~~ Happy bak kut teh-ing!