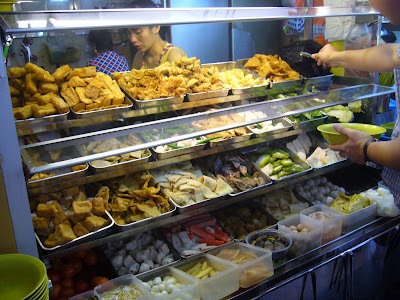 I was watching the presidential debate between Barrack Obama and John McCain for a bit. One pushed for a cut-back on spending while the other wanted to reform spending. With the recent turmoil and uncertainty in the US financial sector, which will have an impact on global markets, it is no wonder some Singaporeans are tightening their belts.

Thankfully, tightening of belts does not mean giving up eating altogether, though the reverse is almost always true. A stall in Bedok South sells Yong Tau Foo at 15 cents a piece! With inflation and blah blah blah, it's amazing to find such prices. 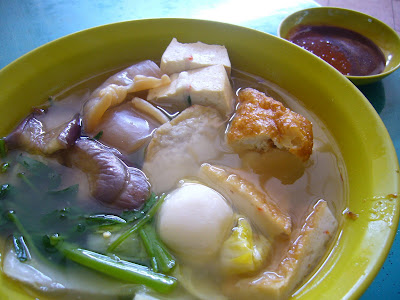 Cheap but sucky food should be avoided. Fortunately, the Yong Tau Foo here is rather decent. The spread includes many favourites such as tofu stuffed with fish paste, cuttlefish, fishball, stuffed ladies finger, fried yam, fried wanton, fried brinjal, kang kong, fishcake etc. The items are relatively fresh and you won't get them pea-sized despite the 15-cents tag. The soup is robustly savoury with the goodness of soy beans and anchovies. But don't gulp down the whole bowl, it could leave you thirsty. MSG I (won't be surprised) hope not. 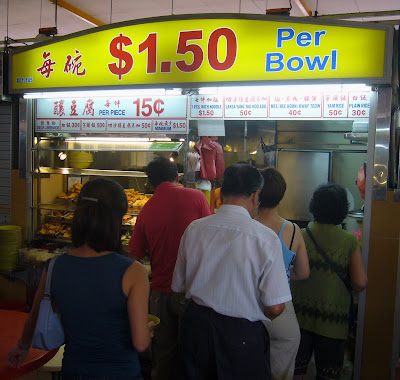 When i thought i was happy with $2.00 for 6pieces+noodles at holland drive market.. 15c/pc is just insanely cheap! Hope it's just as good! (:

qipei: Good to know! So when are u bringing me to eat YTF? Hehe. Wah, so secretive that i can't access your blog ah.