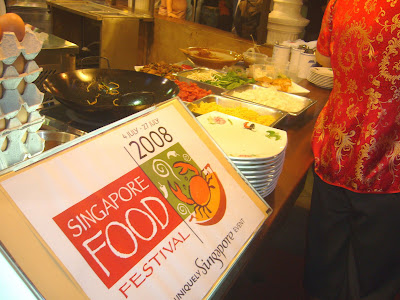 I was pleasantly surprised when I received an email invitation to the opening of the Singapore Food Festival 2008. Apparently, bloggers are now considered part of the media too. :) With the increasing dependence and popularity of the internet, maybe it's no surprise that a new wave of media has slowly emerged. 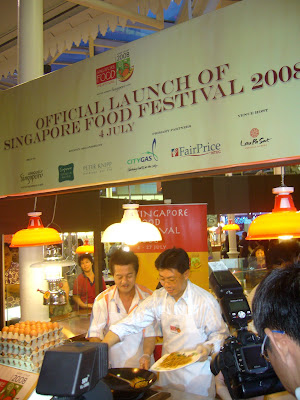 The opening celebrations began by a Char Kway Teow fry-up by Guest-of-Honour, Mr Lee Yi Shyan, Minister of State for Trade and Industry. It was a cameraman's favourite as one does not usually see a minister in an apron working the wok seen by the small crowd with big flashes. A shout of 'ai hiam mai hum' (chilli but no cockles) was even heard. But it was all in good fun. 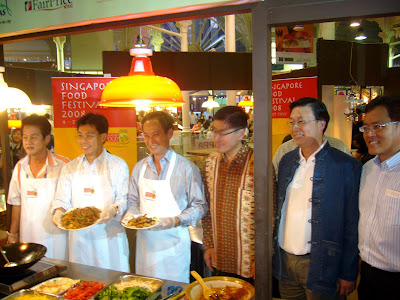 Besides Mr Lee, the Singapore Tourism Board also held their own with their CEO whipping up Rojak, a local salad of fried dough fritters, pineapple, turnip, beansprouts, smoked beancurd puffs, among others, tossed with peanut, sugar and a squeeze of lime in a piquant prawn paste sauce. 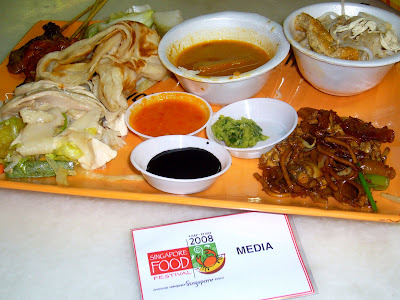 The Singapore Food Sampler made its way to my table. It was almost like a Singaporean degustation offering. Mini portions of Char Kway Teow, Chicken Rice, Laksa, Roti Prata and Satay provided a taste of our local hawker fare. It's a really good way for tourists to sample their way through Singapore! 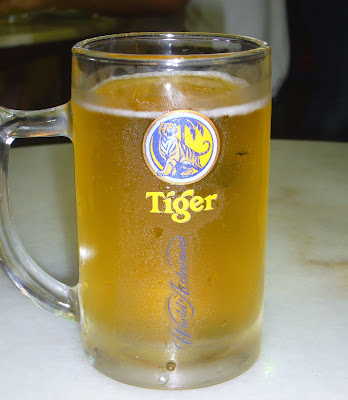 And it can't get any more Singaporean than Tiger beer, who sponsored the beer for that night. Oh yes, a really cold Tiger on a hot day/night is a pleasure. 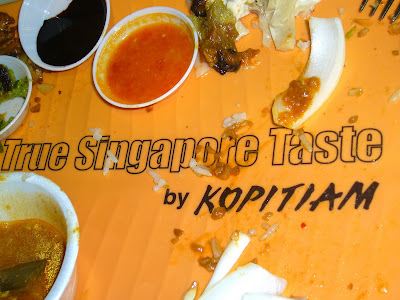 Thank you Candy for the invitation and to all the people who made the Singapore Food Festival possible! 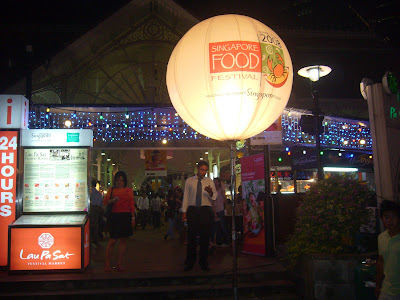 Chew On This: In line with the retro old skool theme of that night, each guests was given a goodie bag that was made of brown paper and had a red-and-white-striped string attached. 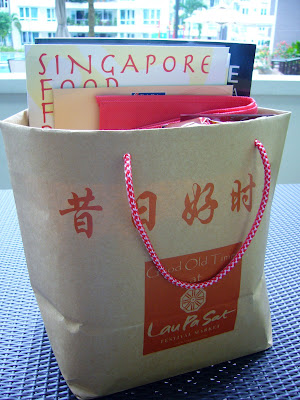 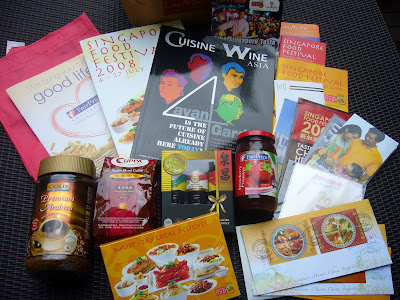 Here's a view of its contents. Rather heavy it was. 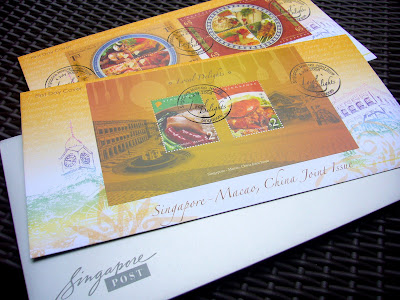 Among the goodies is the cool first day cover stamps which is a collaboration between Singapore and Macao. Selected dishes of both countries are featured on the stamps and guess which prominent dish represented Singapore?
Posted by The Hungry Cow at 3:25 pm

Hey, I was there, too, with Keropokman and Black Tie White Lie! Pity we didn't have a chance to meet up!

How come we didn't get the goodie bag?!

Omg you lucky guy! I had to squeeze with the rest of the crowd to get my food lar! =p

aromacookery: Alamak! I would have been more than happy to meet you guys! The goodie bags were distributed to guests at each table towards the later part of the night. Did you happen to leave a bit earlier?

yiling: Blessed, not lucky. :p You squeezed the crowd to get your food??!! Lol.