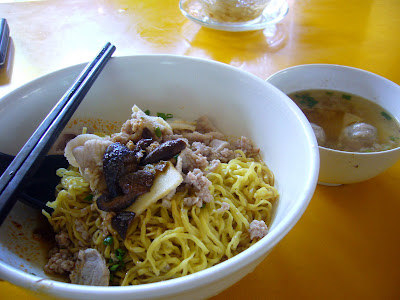 Bak Chor Mee (minced pork noodles) is definately on my list of comfort food. There's just something about the mix of chili, oil and black vinegar that strikes a chord with both nose and tongue.

Instead of my usual Hokkien Mee here at Bedok Food Centre, I had decided to try the Bak Chor Mee instead. My $3 order of Mee Kia Tar (thin noodles in a dry-style) was surprisingly good. The noodles had a nice firmness and the balance of chili, soy sauce, oil and vinegar was spot on.

The small bowl of soup tasted of the sweetness of pork and the two pork balls were delicious with a bit of dried flat fish in them.

Not too bad at all. I hope this is not just a one-off thing but I'll have to return again to decide on that. Okayyyy, now to go queue for my Hokkien Mee. 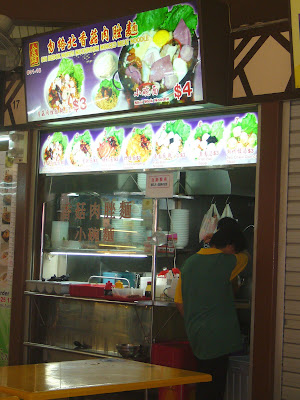 Chew On This: and run across to join the queue for a $2 bowl of the famous Cheng Tng!
Posted by The Hungry Cow at 1:20 am