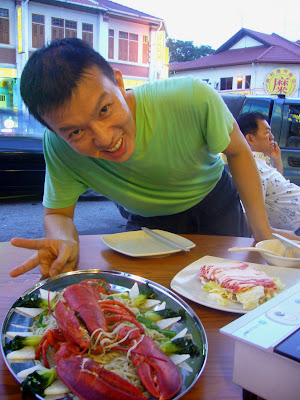 Most foodies will by now be familiar with Ya Kwang. The cow, though having four legs, only came to try it recently (thanks to Winelearner) and was wowed by this Geylang kopitiam (coffee shop).

Ya Kwang is owned and ran by Jason (pictured above) and his wife. Don't let the kopitiam frontage fool you. Ya Kwang offers gems that are daring, unauthentic and novel for a kopitiam. 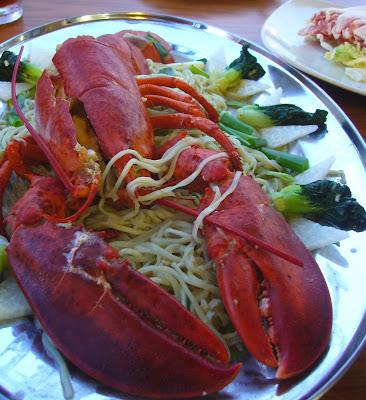 The Lobster Noodles ($70) featured a 700g Boston lobster! The handmade noodles were springy with a good, firm bite. Though a tad floury in taste, they were beautifully coated with a gravy that oozed delicate crustacean flavour. Unlike stronger lobster flavours like those in lobster bisque, this dish had lighter yet tasty flavours. In addition, the lobster flesh was succulent and cooked with good timing. Do take note that this dish has to be ordered in advance! 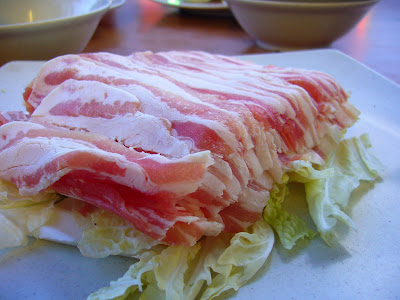 Another unusual item at a kopitiam was the Kurobuta Shabu Shabu ($38). The almost bacon-looking pork slices may appear fatty but thankfully didn't leave a greasy trail upon swallowing. Instead, the fat marbling added a perfumed touch once masticated. This was one 'unporky' pig. People who are adverse to the unpleasant porky taste sometimes associated with the meat should try this one. Just remember that a few seconds dip into the boiling pot will do. Any longer and it'll start to get tougher. 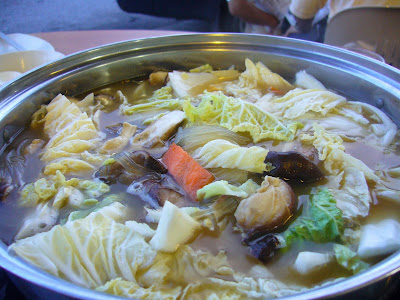 The stock was packed with savouriness and was relatively sweet. I enjoyed the chockfull of assorted vegetables that became tender and sweet after a while in the pot. The best part of the pot? Undoubtedly, the Korean tang hoon (vermicelli) that was QQ and had soaked up all the goodness of the stock! 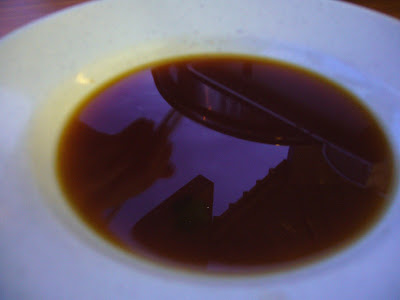 Accompanying the slices of meat was a ponzu dip. The soy-citrus and mirin-like flavour went well with the kurobuta, not that the meat really required any extra seasoning though. I would advise you to try without the dip first and only use the dip later to add flavour variety. 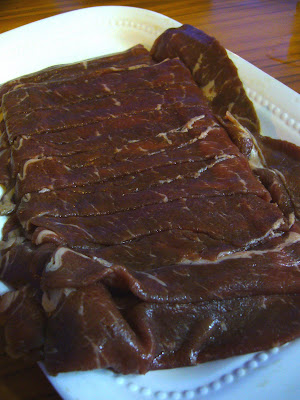 Unlike the delicate flavour of the Kurobuta, the (ordinary) beef had a very strong beefy-iron-y taste which may put some people off. Perhaps Waygu would be more interesting but otherwise, I reckon the Kurobuta's a better bet. 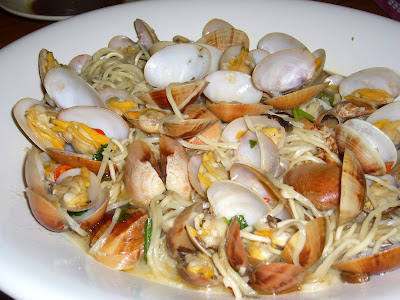 For a kopitiam version of pasta Vongole, try the Clam Ban Mian ($10)! The flower clams used in this dish were nicely firm and sweet. However, a little grit in some of them could be forgiven. It was after all a kopitiam no? The noodles were not really Ban Mian but were narrower and more like You Mian, exactly like the one used in the Lobster Noodles and again, they were pleasantly al dente. The slightly bitter 'broth' that flavoured the noodles were like a clam stock with accents of coriander and a fiery kick from chili padi. This is one interesting dish!

Ya Kwang is truly a gem in Geylang and an oustanding kopitiam. It has novel dishes, good quality food and friendly prices plus a non-pushy/aggressive (in the sales sense) boss! 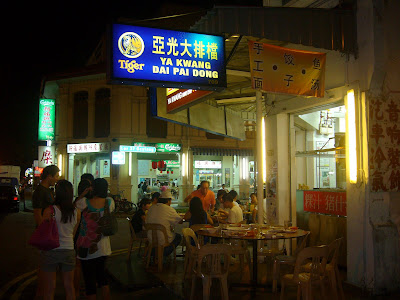 Chew On This: Come here quickly while you still can! That's about as much as I'm gonna say.
Posted by The Hungry Cow at 11:44 pm

The Boston Lobster looks so good... the kurobuta's colour looks different it's not unfresh right:p

alr blogged many times... its over rated...

'unporky'pork. was that something i said ?? hmmm. HAHA. chickeny-chicken. HAHA !

flyboy: I guess lobsters are more photogenic than hogs, even prime hogs. Haha. Yup, it's fresh. :)

The Dictator: Sorry to hear about your apparently less than satisfied experience there. Food is normally just one component, the company adds to it.

Crunchasarus Rex: It's relatively inexpensive considering the amount most restaurants here charge for lobsters. At less than $25 for a lobster, I wanna be at where you are!! :p

tricia: If you look at older entries, 'unporky' and 'chickeny' have been used. So i can totally relate when u used that term in class! Haha.

i heard a lot abt ya kwang, but the prices do seem steep considering its "kopitiam"?

ladyironchef: It's all relative. Lobsters, kurobuta and waygu don't normally appear in kopitiams. :p Share the dishes and it'll be worth it.

I personally have been to Ya Kwang after seeing so much raving by I eat I shot I blog.

I once ordered the beef with caramel & onions,but its just an average dish. Nothing to rave abt.

In addition, when he wasn't around, his China worker's were lazing about. We ordered bittergourd soup, but the waiter claimed there wasnt enuff ingredients. We had to order another soup which was way too saltish. My kidney almost fail to work.

As for the lobster noodles/crab with tang hoon, I would rather wait 1 hour at the kopitiam located at the junction of Lorong 35 (i think) for their crab bee hoon.

anonymous: I actually also visited Ya Kwang to check it out after all the raves it has won. Been there twice so far and Jason was around. Didn't encounter any problems with his China workers during my 2 visit.

Not all his dishes (like the kway chap) impressed me but some do stand out. Sorry to hear about your bad experience there.

Thanks for adding your 2 cents to mine. Now it's at least 4 cents worth! :)