Superdog may sound like a cartoon character but it is pretty serious about business. Started at the basement of Vivocity a few years back, Superdog manages to survive despite its higher pricing. In Singapore's crazy fast-paced F&B scene, where consumers are rather fickle and difficult (want cheap, good & accessible), it is not uncommon for F&B establishments to pack in the crowds at the beginning and fizzle out a few months later. Neither is it rare for F&B establishments to open with a bang one day and totally disappear into oblivion the next year.

Superdog has its marketing strategies worked out with many gimmicks reasons to justify its higher-priced fast food products. Take for example the claim that they only use chilled burger patties and sausages, not frozen. Switch to frozen foods campaign not applicable here eh. 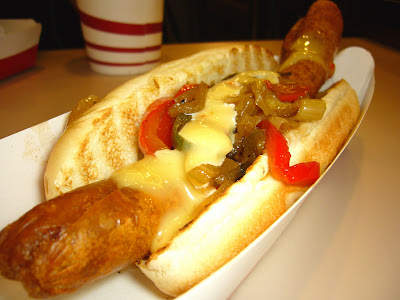 For a place that calls itself Superdog, I had better try their hot dogs. The Capsicum Chicken Dog ($3.60) came with sweet red and green capsicums and was sandwiched between toasted hotdog buns. What I found to be a pity was that the hotdog seemed to be deep-fried rather than grilled. The supple, snappy skin that I so look forward to in hotdogs was disappointingly blistered and tough. Oh well, perhaps those who like their hotdogs deep-fried would be pleased here. 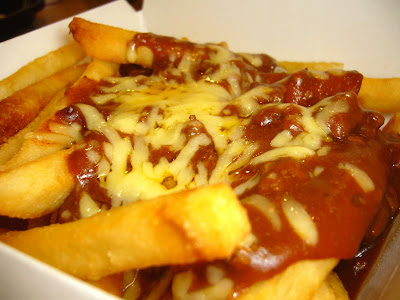 Sometimes when the main star falters, thank God for supporting actors! That's just when the Chili Fries shine. Shoe-string fries fried to a golden brown and topped with a sauce that was assumingly cooked for 16 hours sounds good yea? Let the bits of cheese melt into the sauce before mixing with the fries for some seriously good eating. The tiny bits of beef added a bit of nice texture too but I still don't get the concept of American chili when it's hardly spicy.

While prices here are relatively high for fast food, their burgers and the much talked-about Chocolate Densa are tempting enough to lure me back, at least for one more shot. Oh and I hope they do offer grilled sausages too. 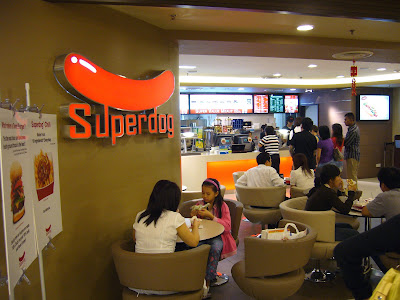 Chew On This: According to Superdog's Hotdog Etiquette, taking 5 bites to finish a hotdog is a no-no! Go check out the rest. :p
Posted by The Hungry Cow at 1:33 am

i haven try superdog before! cos price seems rather expensive for hotdogs? lol

ladyironchef: It's relatively expensive for fast food but I guess still worth the try (but order the correct stuff of which I'm still discovering).

muz try the sausages at Paulaner, eat together with their special mustard sauce. Forgot what's the name of the dish but it's served in a smalll pan. It's delicious and once u start u feel like eating more...

i love their chocolate densa!

flyboy: I like the sausages there too! Hmm...maybe i should check out their sunday brunch buffet some time.

yixiaooo: I feel the chocolate love already! :) I shall give it a go the next time.