Prawns from the River?

Jackson Kopitiam, or more affectionately known as Jackson Market to my family, used to be a regular Sunday haunt for lunch considering its close proximity to Elim Church. Together with my family, my cousins, auntie and uncle have fond memories of chomping on fishball noodles, sambal stingray, pork porridge, ngor hiang, char kway teow etc on a sunny and hot Sunday. Western food was had at the now-defunct Dolphin's Steakhouse just across the street.

Ah memories... Now Jackson Kopitiam is also no longer around. But across the street there is River South (Hoe Nam) Prawn Noodles, one of the most raved about prawn noodles on the island. Strange that I've never noticed it's existence till lately. 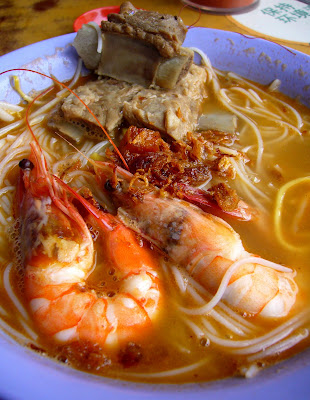 My first order was the Prawn and Pork Ribs with chor bee hoon (thick vermicelli) in soup ($4). Oh yessss...the soup had a thin orange foam on the surface. Presumably from all the boiling of prawn heads and shell. It was a good sign, for the soup was prawny-ly rich but yet rather light and clean tasting. Totally different from the robust, in-your-face soup from my favourite Beach Road Prawn Mee in Upper East Coast. 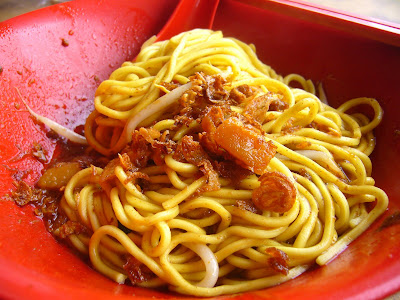 As if following some kind of ritual, my second order was for a dry version of the Big Prawns with Yellow Egg Noodles ($4). Sad to say, the chilli was too sharply spicy for the noodles. The heat overwhelmed everything else. No pork lard or vinegar could save it. 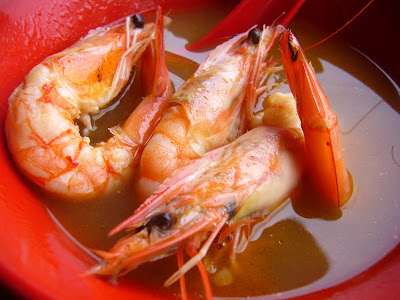 But the good part was the prawns that came in another bowl with soup that was more flavourful. I find that noodles in soup tend to dilute out the taste of the soup.

And the prawns here came without their shells (which I guess they strip away to use for the soup). How convenient! I was a little disappointed with the size especially since the stall called it 'big' but it was still decent nonetheless...just not what I would expect of 'big'. Size is indeed relative. The flesh was meaty, sweet and had an incredible bite, not in the super-crunchy chemically-enhanced way. For me, this has got to be the best prawns in my prawn noodle escapade so far! 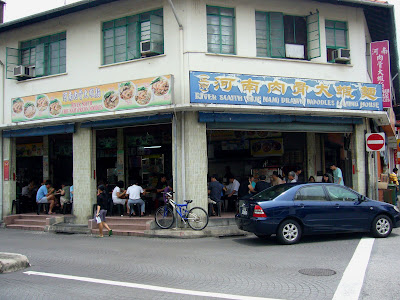 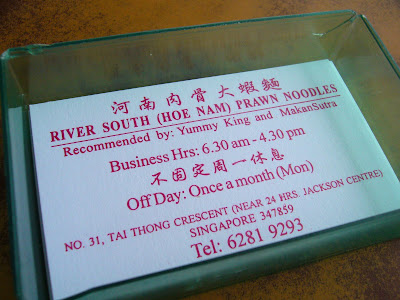 Their business card is on almost every table. Serious business and a good move me thinks.

Chew On This: For those who like lots of ingredients in their prawn mee, you'll be glad you can pick from intestines, stomach, baby abalone, canned clams etc etc.
Posted by The Hungry Cow at 11:53 pm

I never heard about this stall too!
Usually patronize the Beach Road stall along Upper East Coast Road. :)

Is Dolphin Steakhouse the same one as the one now at L7 of 81 Genting Lane (yes, in an industrial building!)?

tigerfish: Hello there and welcome! The Beach Road Prawn Noodles are my favourite too. Btw, they have increased to $4.50/bowl now. :(

mama bok: You were from Elim too? I used to go there as a kid too! Haha. Jackson is just a bit further down along that same road. Yeap, there are quite a few tyre/motorcycle workshops around and in fact they still are around!

contrarian: Heya! You may be right. I've not visited them since their Macpherson outlet closed years ago but have heard of a similarly-named place at Genting Lane.

I love this place. Their soup is worth the wait and sweat!

joone: That last sentence summarises it all. :p

thanks for letting us know it's still around! i haven't went there for almost 3 years thinking it might have closed (it's kind of out of the way) together with jackson's. It used to be $3 when i ate there! The plain prawn noodles w/o pork ribs.

cal: No prob. Go get some prawn mee! Im sad that jackson's gone. :(