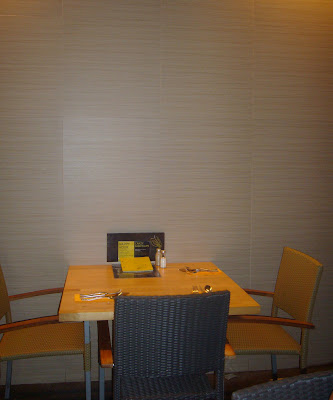 For the past 24 years, CNY reunion dinners have always featured the extended family members gathering around a steamboat bubbling with prawns, fish maw, fish balls, tofu, meat and vegetables. Chopsticks dash in and out of the pot like the bills of ducks, fishing for the missing piece of squid. A perfect chance to see and catch up with uncles, aunties and cousins. "Are you still in the army?" anyone?

But 2008 was to be different. My dad, mum and sis were heading to Vancouver to visit my uncle during the CNY period and would miss CNY's eve. So while I still went for the reunion dinner with the extended family, the immediate family decided to hold our own reunion dinner in advanced before they flew off.

Not wanting to do the whole buy-clean-prepare-wash routine just days before a long-haul flight, mum suggested eating out. And out we ate.

Having nothing but lip-smacking memories of the mussels and fries we had before, it didn't take long before we booked a table at Brussels Sprouts. 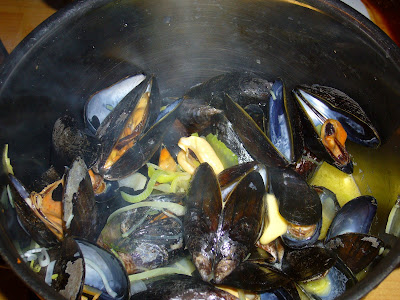 The Mussels Vin Blanc ($38 for main size of about 700g) were as good as before. These were not huge mussels. In fact, they were not even big. But sweet and juicy they were and happy I am. The white wine, celery, onions brought out the sweet flavour of the sea in the mussels. Yum yum yum. 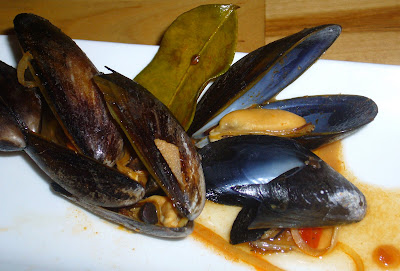 Deciding to try an Asian flavoured pot of mussels, we opted for the Tom Yum ($38 for main size of about 700g). The lemon grass, galangal and chili added a spicy, pleasantly acidic zing to the shellfish. It is very interesting that they've given the dish a definitive Asian twist that yet blended well with the mussels. As the Tom Yum has stronger flavours, it would perhaps be good to start with a relatively lighter-tasting one (like the Vin Blanc) before this. 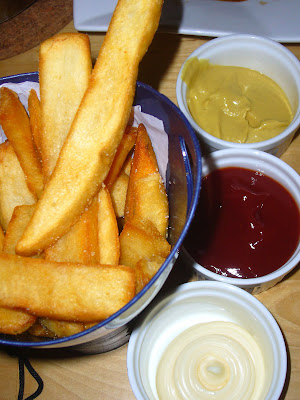 Golden, hot starchy fries make me happy and that must mean it's good for the heart too. Oh dear, what am I saying. The thick-cut fries remain one of the best I've tasted even though it wasn't too consistent on this visit. But make your heart happy and chomp on these fries which comes free-flow with an order of the mussels.

Speaking of which, mussels may be delicious but they are ridiculous for filling the tummy. We all know 700g of mussels and a 700g steak may weigh the same but they don't settle in the stomach in similar proportions. We humans don't eat shells after all. 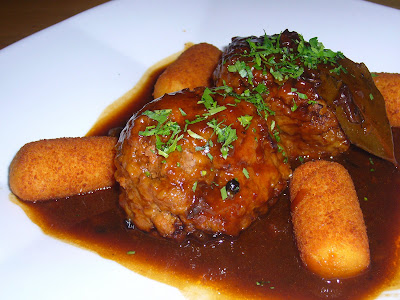 As such, the Braised Meatballs with Dark Beer Sauce, Onion, Mustard served with Pommes Croquettes ($22) made its appearance at the table. Those expecting Ikea type of meatballs would be stunned. There were only two meatballs but each of them was really big. I suggest to not try popping one into the mouth. We humans can't voluntarily dislocate our jaws a la pythons.

The meatball was moist and herb-flavourful. The meat could have been less minced but that's a small issue. The dark sauce was rather strong. Apparently made from dark beer, it gave me the impression of a burly, strong dark knight. Batman maybe? But illusions aside, I didn't really take to this. The Pommes Croquettes at the four corners of the plate however were crisp shells of potato that were gobbled up in seconds. 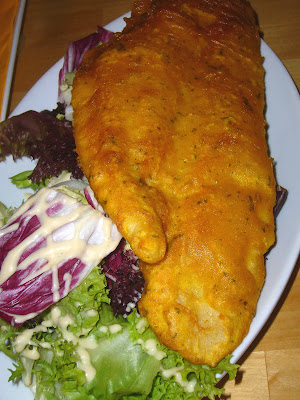 The Belgians do their beers, seafood and fries well. So I was thinking how their fish & chips would turn out. After all, it's a combination of all three yea. Named Vis en Frites ($22) on the menu, it was disappointing. The batter was soggy and while the large flesh of the white fish was firm, the whole thing tasted flat. Bits of herbs were incorporated into the batter but it only mustered a visual appeal. Alas.

Still, the evening out with my family over this newish sort of reunion dinner was splendid. Cool breeze from the near-by river met the bustling energy of people hanging out, colleagues chilling after work and families gathering for dinner. I love the vibes here. 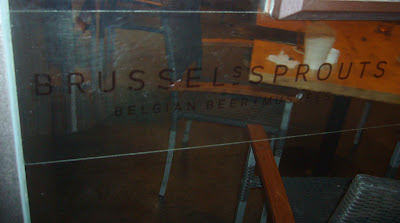 Chew On This: To add on to their already impressive stock of Belgian beers, Brussels Sprouts has expanded that list to currently boast more than 100 different beers! à votre santé!
Posted by The Hungry Cow at 8:12 pm

I recently did mussels with white wine. Never thought of doing it with Tom Yam. Good idea. Will try it one day. 1.2kg of mussels cost me about 6.50€. Not sure how much it cost in Singapore but it is really easy to prepare this dish.

ladyironchef: I like the place too, along with their mussels and fries! For the items mentioned in this post, the bill came to about $140 for my table of four. But it could have been lower if not for a hungry cow.

sohcool: Hi sohcool, I think the produce you get in France is better than what we get here! Agreed, mussels in white wine is easy to do. Maybe you could come up with your own take on laksa mussels or mussels rendang! That would be so cool. :)