With Chinese New Year just round the corner, steamboats will be a constant feature. And sometimes there is nothing like a pot of mala to spice the good ol' steamboat up.

After coming in 3rd place in the Amazing Grace last Decemember, Holy Communion Beta was rewarded with a $300 voucher from The Chinese Feast. And loving the mala here, I was more than happy with this bonus. Sunday lunch was about $19.90++ per person.

Mala is essentially a potent brew of many, many spices. Sze Chuan peppercorns give it a numbing sensation. The version in Taiwan differs from that in Chong Qing. And it was in Taiwan many, many years ago that I first tasted and fell in love with mala. That love in the family soon blossomed to our own mala restuarant in Prinsep and later to food courts in Scotts and Clifford. But I digress. 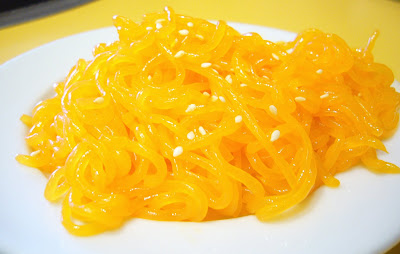 The appetiser of orange noodles was delicious. Slightly chilled with hints of sesame oil and a springy texture, it made for good eating.

Being an ala carte buffet, there was a wide array of dishes to order for the steamboat. Beef, chicken, pork, fish, prawns, wanton, liver, beancurd, yam, lotus roots, fish glue (essentially fish paste) etc etc. Both meat and veggie lovers would like the assorted variety. 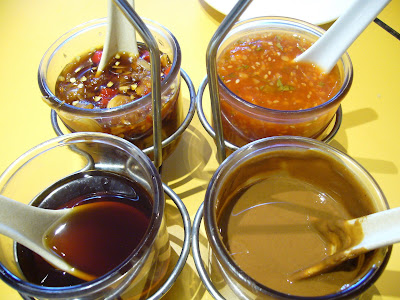 Four sauces were offered to dip your food in. I would recommend mixing the sesame oil and sesame-peanut paste (both at the bottom of above pic). You can tell I'm a sesame oil freak already. It addes a nice savoury dimension to the cooked items from the mala pot. Besides, it calms the tongue a bit from all that spiciness too. 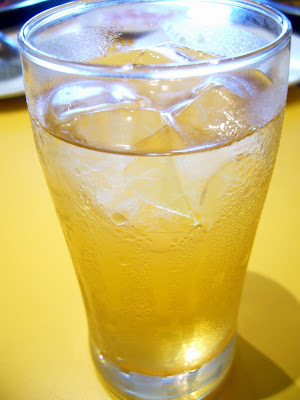 But for more chilli-dousing, order the free-flow of Iced Ba Bao Cha (Eight Treasure Tea) at $4 per person. Iced cold with a lightly herbal and pleasant bitterness, this is great for a hot day or a hot (in the spicy sense) pot. 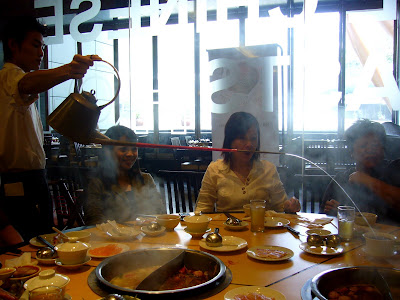 For those who prefer their teas hot, the Ba Bao Cha can also be served hot. Hot water straight from a long-spout kettle into the cup makes an interesting talking point...and photo. 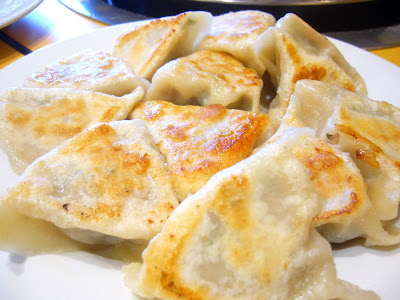 As a complimentary side, each person was served one Guo Tie (potsticker)... 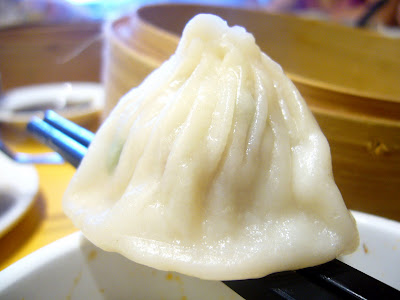 One Xiao Long Bao (small meat dumpling)...one Fried Mantou (Chinese bun) which I forgot to take a photo of... 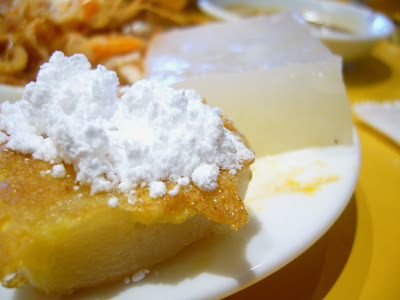 And one each of the Nian Gao (glutinous cake) and Water Chestnut Jelly. Out of these four items, I particularly like the Water Chestnut Jelly (in the background of above pic). It was cooling, had small bits of crunchy water chestnuts and just subtly sweet. Perfect way to end the fiery meal.

I still think The Chinese Feasts' mala is one of the best around in Singapore in terms of taste, ambience/comfort and value (for lunch). I so miss Just Numbling Hot. 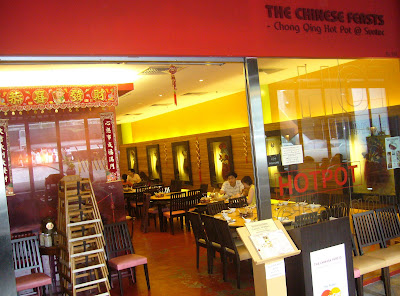 Chew On This: Some people may get the runs after eating mala. This is not an hygiene issue but rather the spices and herbs that go into the soup. Detox anyone?
Posted by The Hungry Cow at 12:41 am

i love this! the best buffet steamboat i ever had, usually i go to the one at tanglin sc, but they do not serve the orange noodle, was it an additional order not part of the buffet?

Is this owned by TTC from the forum of Makansutra..??

foodiegymmie: Heya, I actually started out at the tanglin one too! Didn't notice any orange noodles there. It was served as a starter. Don't think it was part of the buffet menu.

Jaime-La-Nourriture: Hello! Nice to have another visitor, especially a fellow food blogger. =)

Yeah, while the colour may seem strange, I like anything starchy, chewy and with sesame oil.